Marc Márquez’s comeback from potentially career-ending injury is a work in progress, but today we can add the name Ana Carrasco to the list of superhumans – most notably Mick Doohan, Robert Dunlop and Ian Hutchinson – that overcame the most hideous odds to keep doing what they love and win again at a high level.

In 2018 Carrasco won the Supersport 300 World Championship and last September suffered serious injuries while testing her Kawasaki Ninja 400 at Estoril. She fractured two vertebrae, luckily without damage to her spine, her luck measured in mere millimetres.

For obvious reasons, spinal injuries are a particular worry for motorcycle racers, but Carrasco didn’t hesitate for a moment. Her immediate focus, just like Doohan and the others, was: when can I get back on a motorcycle?

The titanium support bars and fixing screws inserted to stabilise the fractures were removed in January and the holes left by the screws filled with freeze-dried bone graft to accelerate healing. At the end of February Carrasco started pre-season testing and at round one at Aragon she finished fifth in the second race, three tenths behind winner Tom Booth-Amos.

On Sunday Carrasco won the second WorldSSP300 race at Misano, at the front of a frantic 15-rider lead pack, after Booth-Amos fell at the last corner.

The fact that Carrasco is a woman either is or isn’t significant, depending on your viewpoint, but the 24-year-old from Murcia has certainly blazed a trail for female roadracers. 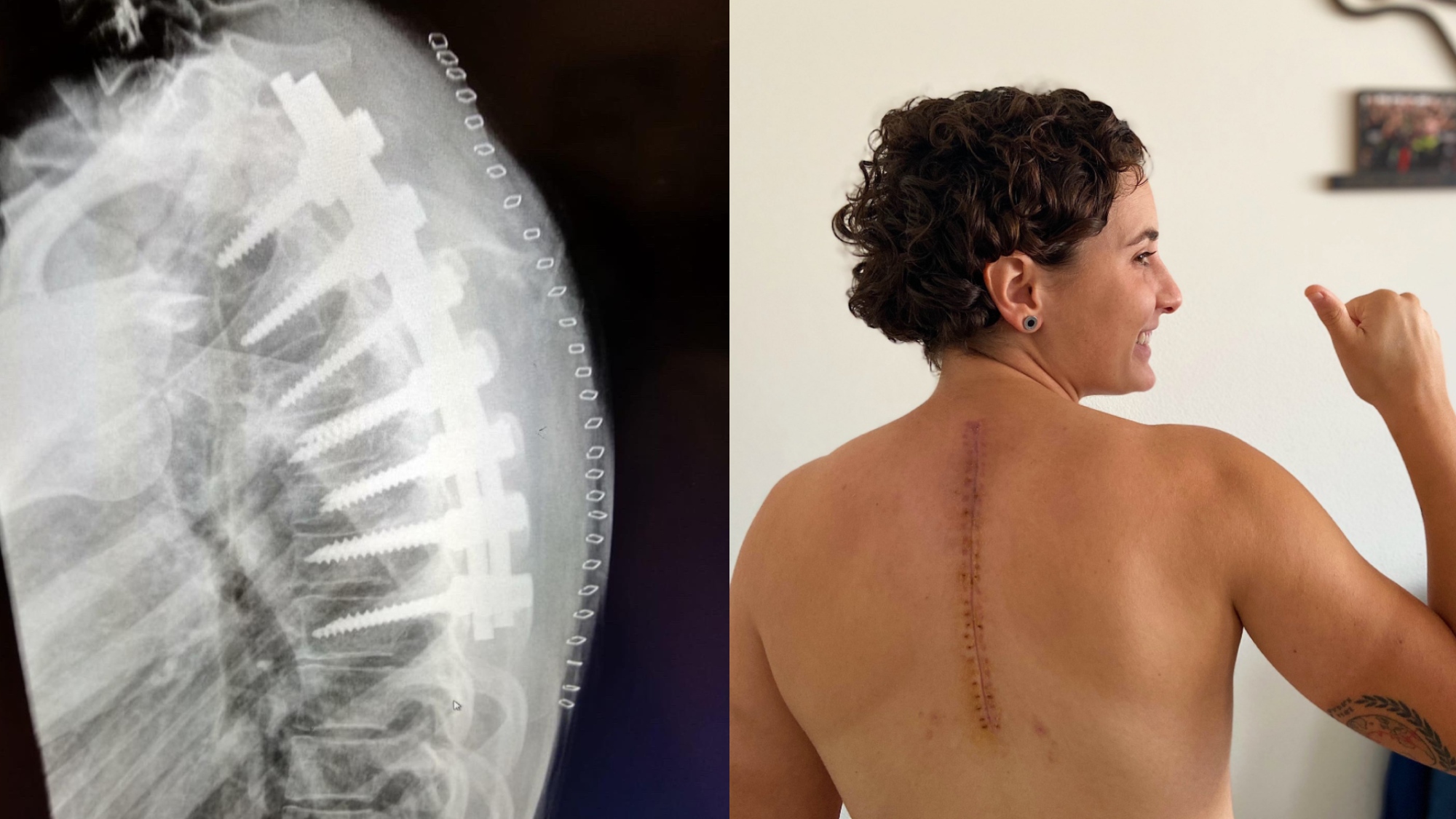 X-ray of Carrasco’s back with rods, screws and staples, and six weeks after the operation

Many more women have done great things in world-class roadracing, but now is a good time to go back to the very beginning, to a Londoner called Beryl Swain, who in the early 1960s fought an eventually unsuccessful battle with mind-boggling sexism to compete in the sport she loved.

Swain raced in the 50cc class, which became hugely popular in the 1960s due to the sales success of mopeds. She was a regular top-ten finisher, despite some organisers forcing her to start from the back of the grid because she wasn’t a man.

In 1962 the FIM created the 50cc world championship to reflect the burgeoning interest in these tiny machines. Swain saw her moment and entered the British round of the series, at the Isle of Man TT. In so doing she became the first woman to enter a solo world championship event.

‘Not so fast’, said the ACU, organisers of the TT. Six weeks before practice was due to get underway the ACU introduced a minimum weight limit for the 50cc race of 9st 6lb, 60 kilos. For safety, they said.

Swain weighed 7st 10lb (50 kilos, one less than multiple MotoGP winner Dani Pedrosa) and might’ve given up there and then. Instead, she embarked on a carb-heavy feeder diet: cakes, bread, potatoes and sweets.

And not only was the ACU after her, but the British press also joined in.

“Personally, I am very much against women taking part in racing,” wrote Charlie Rouse, editor of British weekly Motor Cycle News. “I’ve got nothing against them, in fact I think they’re rather nice, and I would like to see them stay that way. Motorcycle racing is dangerous, and frankly, I think their presence adds to the danger.”

When Swain arrived on the Isle of Man at the end of May in 1961 she nearly tipped the scales at 60 kilos. The ACU allowed her to make up the difference with a lead belt.

The race was won by Iron-Curtain defector Ernst Degner, riding the factory Suzuki he had helped design using knowhow he had gathered at East German manufacturer MZ. Degner averaged 75mph aboard his eight-horsepower RM62, which could just about nudge the ton down Bray Hill. 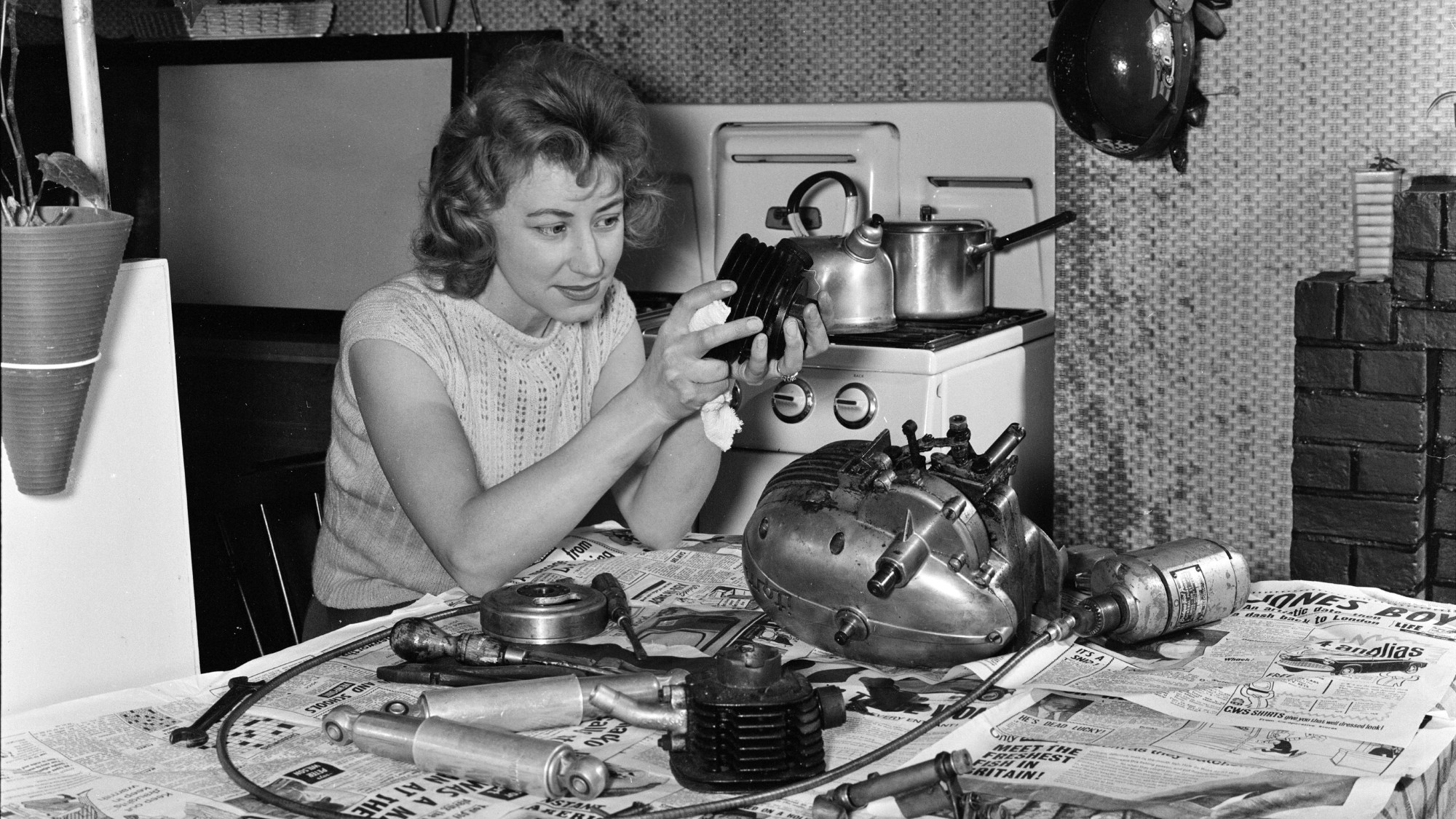 Swain took the chequered flag in 22nd place, averaging 48mph aboard her rudimentary and very slow Itom, which lost top gear in the early stages of the race.

The result encouraged her to plan a full world championship campaign for 1963, using one of Honda’s new 50cc production racers, the 14,000rpm, 8.5 horsepower CR110.

“Slowly and surely women, the weaker sex, are muscling in on man’s domain – practically no sport is sacred,” said a comedic (for all the wrong reasons) British Pathé newsreel that filmed Swain going shopping and riding at Brands Hatch shortly after her TT debut.

Again, not so fast. This time it was the sport’s governing body that intervened. The FIM had never banned women from competing in world championship events, simply because it had never considered such an eventuality.

Swain’s plans immediately swung the male chauvinists at the FIM into action. In October 1962 they announced that women riders were henceforth banned from all international motorcycle events. Swain was therefore refused a licence.

She appealed the decision, but the FIM refused to allow her to put her case in person, so she compiled a 2000-word letter, arguing with eloquence and vigour.

“There has never been a fatality involving a woman solo rider,” she wrote. “But two have been killed riding as sidecar passengers with men driving. It’s a matter of prejudice under a thin veneer of safety first.”

Of course, her words made no difference.

“No one should like to think about such a charming person getting hurt in a motorcycle race,” wrote an official in turning down her appeal.

With no hope of furthering her career as a motorcycle racer Swain had no choice but to give in and hang up her leathers.

“This wordy wife is hopping mad,” wrote the Daily Mirror, continuing the tone of the ACU, the FIM, MCN and pretty much everyone else.

The world has come a long way since then. Women roadracers compete all over the world but many still suffer at the hand of sexism. Earlier this year Moto3 and WorldSSP300 rider Sharni Pinfold announced she was quitting the sport due to misogyny. 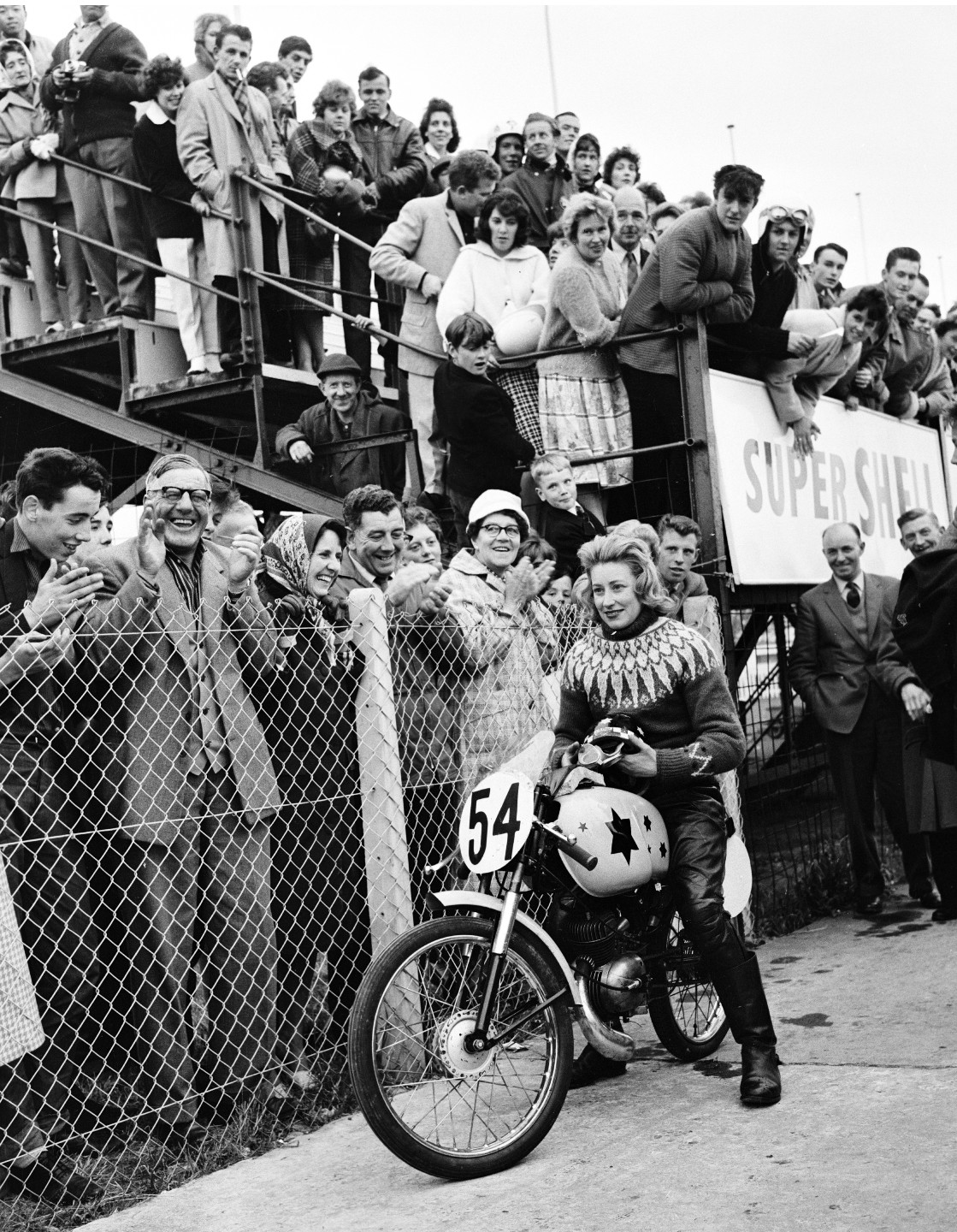 “Most of the challenges I have faced have been sourced from the lack of respect and derogatory treatment of women,” wrote the Australian. “Things that I know that I would have never had to experience or be exposed to if I was a male.”

The FIM has worked hard in recent years to make bike racing more welcoming to women.

“Any form of discrimination based on political, religious, sexual or racial grounds shall never be tolerated,” wrote the FIM in response to Pinfold’s statement. “Since 2006 the FIM Women in Motorcycling Commission has been working hard to create equal opportunities and promote equal treatment for women involved in motorcycle-related activities.”

Carrasco’s Misano victory was greeted with applause from around the world. However, some people – most likely just not thinking – announced that her success proves she has balls.

Call me picky, by all means, but my job is literally to pick the right words, so forgive me if I find it strange to congratulate a woman for her bravery by giving her male reproductive organs.

Literally the whole point is that Carrasco doesn’t have balls, thereby proving that you don’t need to be ballsy to be brave. This isn’t a case of being politically correct, it’s simply a case of being correct.

I’m not trying to start an argument. I’m merely suggesting that perhaps we could try a little harder with our choice of words.

I think Carrasco – who is a law student at a university in Murcia – may feel the same way because she makes a big noise with her self-styled nickname, Pink Warrior, and her battle cry, ride like a girl.

Her nickname joins two words – pink and warrior – which might otherwise be considered oxymoronic and turns them into a powerful statement, thanks to her impressive riding ability.

As for riding like a girl, for many years motorcycle racers have insulted each other by claiming, “mate, you were riding like a girl”. Carrasco has taken that insult and disarmed it, just as the gay community does by taking the usually pejorative word ‘queer’ into its lexicon.

All things in life are better with a good mix of people, so we can only hope that Carrasco’s success and her awesome comeback encourages more women to have a go at motorcycle racing.