We drive southwest from ‘King’ Kenny’s ranch, where America’s Grand Prix dominance began, down the Californian coast on Highway One, the smell of the Pacific Ocean dazzling our nostrils. We turn inland from Monterey and head up into the hills, through security gates, into an exclusive wooded estate.

At the top of a driveway (twice as long as ‘King’ Kenny’s!) sits Wayne Rainey’s new home. The hacienda-style bungalow looks out across the ocean and Clint Eastwood is a near neighbour. Homes don’t come much nicer than this and you can’t help but think that America’s second hat-trick 500cc world champ deserves to live in a kind of paradise.

Rainey – 500 champion in 1990, 1991 and 1992 – lives in a bungalow because of what happened on the afternoon of September 5, 1993. That day the Californian had the hammer down at Misano, chasing a fourth 500 crown ahead of arch-rival Kevin Schwantz, when his Yamaha YZR500 pitched him off and broke his back.

“I was so, so happy  when I stopped. I didn’t realise that would happen because racing had been my life”

Rainey long ago acclimatised himself to life in a wheelchair and seems happy with his lot, but even now, 17 years on, he seems forever frozen in that moment. He must’ve run the events of that afternoon through his mind half a million times, so he’s perfectly comfortable talking about it, though the emotion still seeps through.

The first years after the accident were horrible. Less than six months after Misano he was back in the paddock, running his own Marlboro Team Rainey outfit alongside Marlboro Team Roberts. It seemed the obvious idea – give the man something to do, keep him busy inside the sport that had been his life for two decades. In fact, the job came to seriously threaten his wellbeing, both physically and mentally.

“During the years after my injury it was difficult to try to adjust to my new life while at the same time being stuck in my old life,” he says. “It was really confusing and odd and I wasn’t comfortable in any of it.” 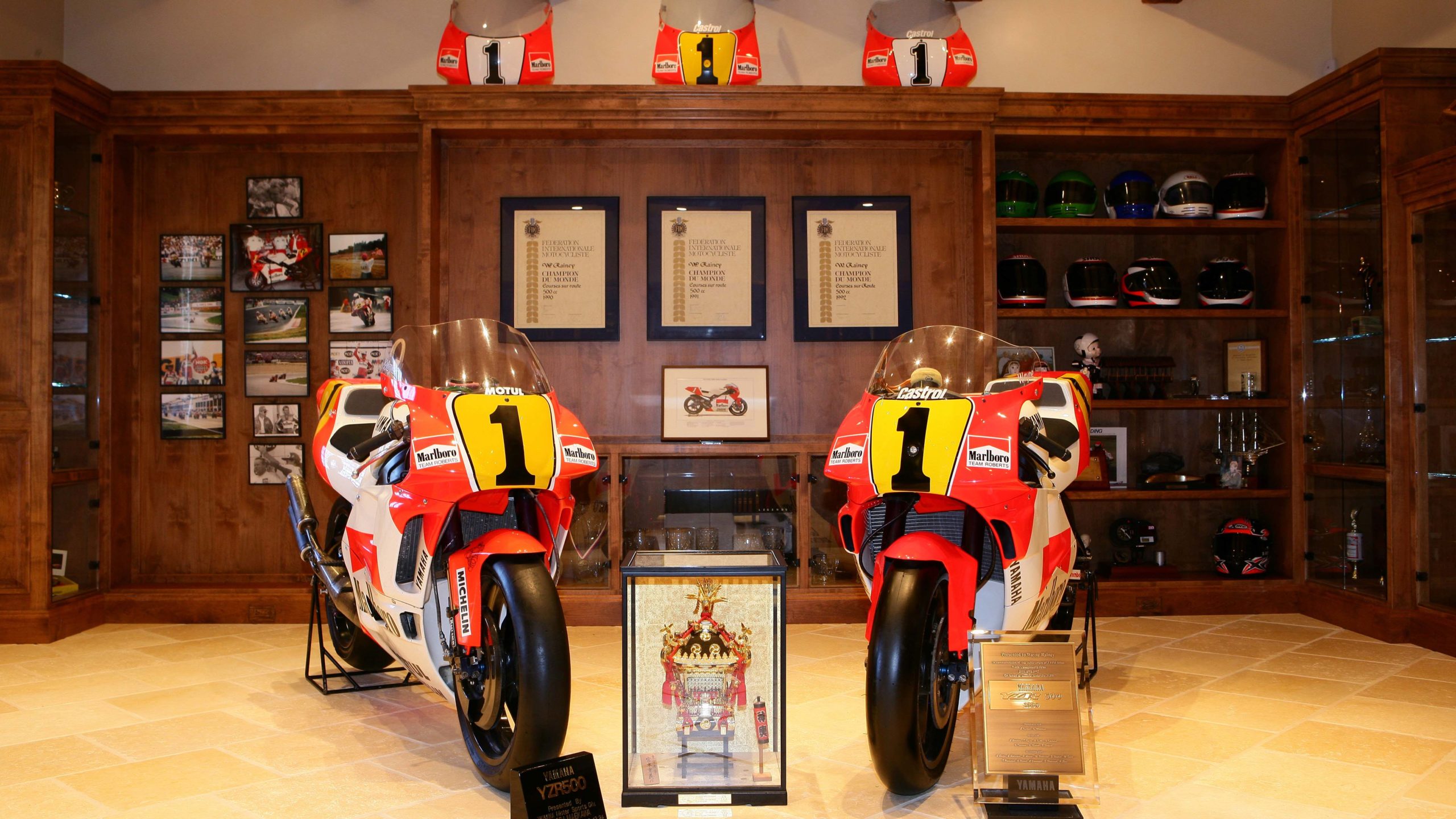 Rainey’s trophy room is right next to the kitchen: these are his 1990 and 1991 title-winning YZR500s

Rainey the team boss struggled bravely for two years and throughout that time it was painfully obvious that he was suffering, that he wasn’t happy doing what he was doing.

“It wasn’t doing my body any good and the emotional part of it took its toll. Also, it wasn’t easy for [his wife] Shae.”

Rainey makes it clear that the easier part of his disability is being unable to walk. It is all the other associated complications of being paralysed from the chest down that cause him much more upset.

“If it was just not walking, it would be easy, it would be a slam dunk. I’m a T6, T7 paraplegic, what they call a complete, which means there’s no feeling, no muscle, nothing working from my injury level down.’

Finally, he retired from team management duties at the end of 1997 and went home to California, determined to leave his old life behind and make the best of his new life.

“When I decided to stop I was so, so happy and I didn’t realise that would happen because racing had been my life. When I said goodbye to the paddock I was so pumped, so excited not to have to face it.”

Even now, you can still feel the delight he felt at that moment.

Like most racers, most motorcyclists even, Rainey had always been aware of the price he might have to pay for living a high-risk life.

“I thought about it when I raced and it’s your worst nightmare. I saw guys in chairs at the circuits and I saw Gary Cowan [Team Roberts 250 rider, paralysed at Daytona in 1990] in a chair. I was always thinking I don’t want to be that guy, I don’t want to be in a wheelchair. 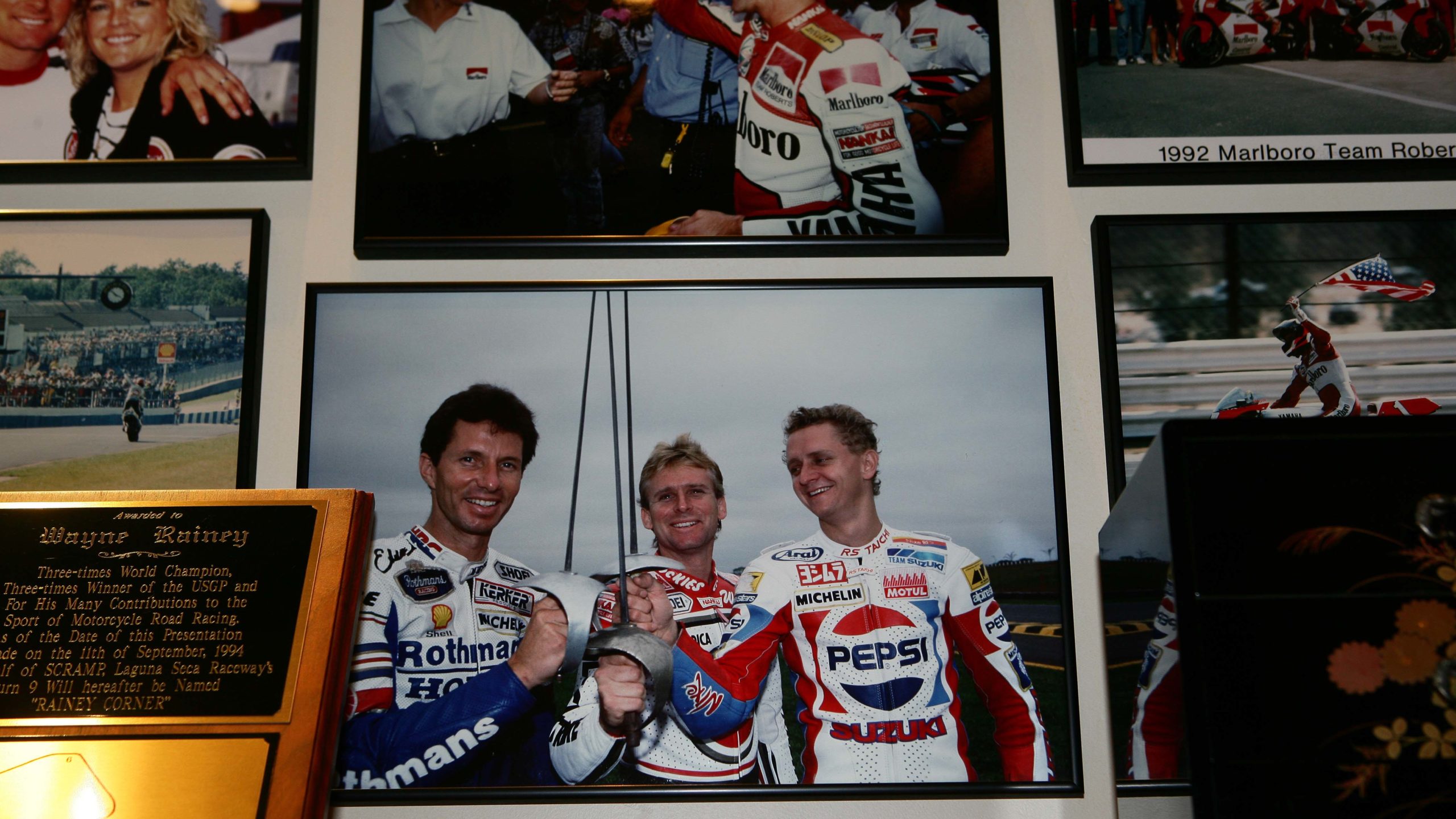 Great memories of a great era, with Lawson and Schwantz (left and right of Rainey), and wife Shae (top left)

While we are talking, a workman arrives to fix a roof leak. “There’s nothing that makes me madder than having to depend on somebody else to do such a simple task. But that’s where I’ve had to grow and learn to be patient.

“Nowadays I’m like any other man. I have my struggles, trying to go through life as we do. There’s still struggles because of my disability, that’s still very prevalent. And I think about how easy it used to be, but saying that, I’ve realised that this is the way it is. You move on, you take what you get and you go. I don’t know, it could get worse. We don’t know what tomorrow is going to bring, so I just live for today and thank God for what I have.” 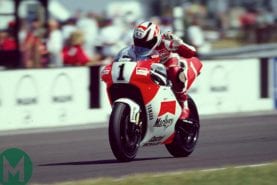 Rainey and Misano: 25 years on

This weekend’s San Marino Grand Prix marks a sad anniversary – a quarter of a century since one of the sport’s all-time greats ended his career Photos: MotoGP I don’t…

“Basically, I’m retired. Financially we’re fine, so long as I don’t go out and buy yachts and planes; I never needed all that stuff anyway. I’ve got some rental and investment stuff and I spent four years doing this house. I also help out a company that does refurbished wheelchairs for Third World countries. I could be busier, but I don’t want to get on airplanes. Plus Rex keeps me busy.”

Son Rex, born 11 months before his father’s career-ending accident, is working to get into university. Both mum and dad seem happy he isn’t a racer.

“If I hadn’t had my injury we would definitely have been going dirt bike riding and all that. I’ve taken Rex to Kenny’s ranch and he would ride around and have fun, but he never wanted to go racing. He’s really into baseball.”

Rainey works hard at keeping fit, pedalling a three-wheeled hand-cycle. And he’s had a lot of fun racing a kart, specially adapted by father Sandy and former team-mate Eddie Lawson. The kart is no plaything, it’s powered by a 90-horsepower Yamaha TZ250 engine. 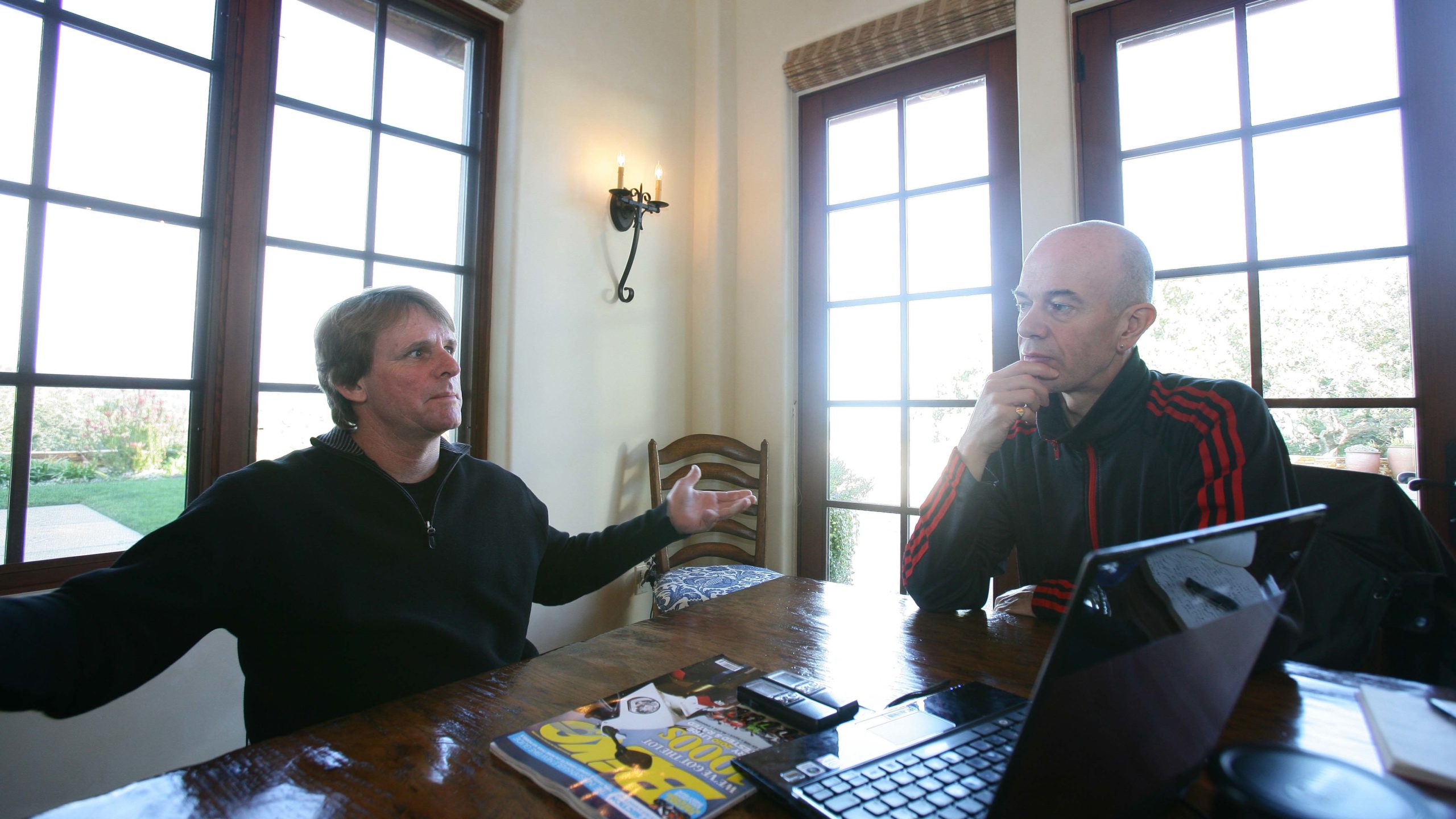 Rainey and author Oxley discuss the age of superheroes, 1988 to 1993

“I was two weeks into rehab after the accident and Eddie comes walking in.”

It was the first time the old friends had spoken in a couple of years, after they’d fallen out in 1992.

“We started talking and Eddie said, ‘We’re going to get you back on the track’. I didn’t know what to expect but I had fun putting my helmet on again, it was really neat. And what he’s done has done wonderful things for my dad. They go race and they call me after practice and Eddie’s pissed off because the kart’s not fast enough and my dad’s upset because he’s trying to jet it better. I just laugh, but it’s nice they still do that.

“I didn’t like the idea, but I could see he loved it,” she says. “The problem is it’s dangerous if he has an accident or if the kart catches fire, because he can’t get out.”

Rainey soon rediscovered his race face. “I started having frustrations with the kart because I wasn’t fast enough. It was like, wait, wait, why am I doing this? Come on, just have fun. I rarely drive now, though Eddie would still like me to get out there so he’s got someone to go play with.”

Rainey and Lawson enjoy racing even when they’re miles apart. They watch MotoGP online while talking on the phone, marvelling at how MotoGP has changed. As two men who spent their racing careers honing that vital link between brain, backside and right wrist, they are sceptical of MotoGP’s latest technological advances.

“The racing doesn’t excite me the way it did. When you hear 250 guys getting onto a MotoGP bike and saying, ‘This thing’s easier than a 250’, I hate to hear that, it doesn’t sound right.” 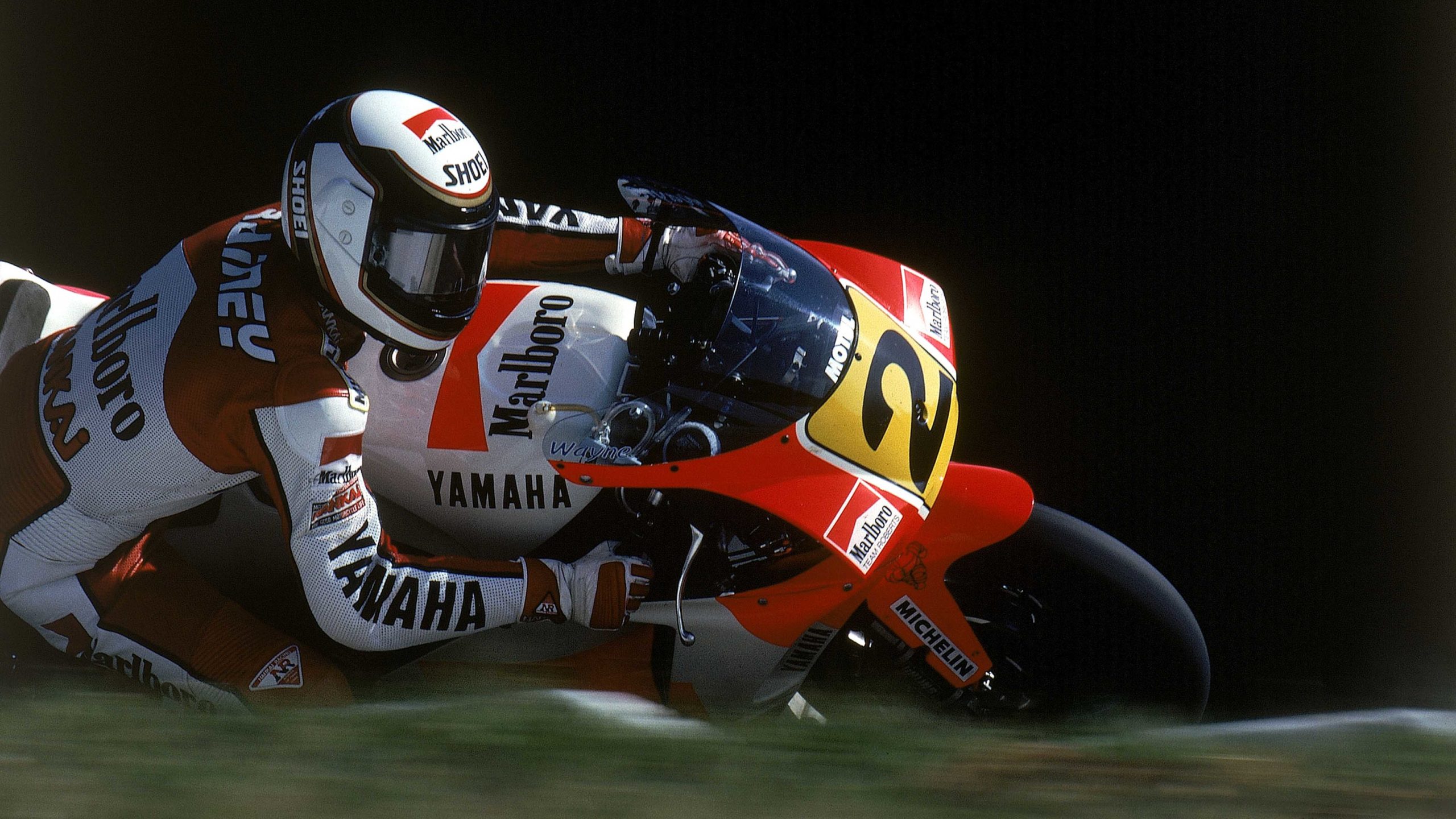 Rainey on his way to victory at Brno in August 1990, where he secured the first of his three consecutive 500cc world titles

“I’m all for it,” he says, then he adds with an aching poignancy. “If a guy can finish his career and walk away from racing, that’s what we want. We want the bikes to be not so violent that everybody’s hurting themselves. We’ve been through that era of guys getting hurt, we don’t need to go back there.”

There is no racing memorabilia in the Rainey kitchen, dining and living areas, and you can see why – so many great memories but painful memories too. Everything is tucked away in a room next to the kitchen. ‘People go in there, thinking it’s the bathroom,’ Rainey grins. The wood-panelled room is an immaculate shrine to Rainey’s achievements. Inside there are two title-winning YZR500s, half a dozen glass cabinets full of trophies, photographs, helmets and leathers.

Lawson, Rainey and Doohan: giants of their era

I blame it on Kenny Roberts, but it would’ve happened anyway. When ‘King’ Kenny arrived in Europe in the late 1970s he upped the ante: he rode harder, trained harder…

Rainey seems shy about his trophy room. He doesn’t want us taking too many photos in there, as if he thinks it might seem like showing off.

Rainey was never that kind of racer, he was never a show-off. He was a diligent worker with a never-say-die attitude. Looking back he still believes he may just have taken it all a bit too seriously.

“What you’ve got to like about [Valentino] Rossi is that he doesn’t let his pride get in the way. I think in our era, us Americans had a lot of pride. If you got beat you would never admit that the other guy was faster.”

The Rainey, Schwantz, Lawson, Mick Doohan era was certainly very different: brooding, macho gunslingers wrestling evil 190mph two-strokes around hideously dangerous racetracks, none of them ever willing to back down. There will probably never be another time like it. And the sad thing is that neither Rainey nor any of us are sure if that’s a good thing or a bad thing.

Postscript: since this interview was written Rex Rainey is now a grown man and Sandy Rainey, who played a pivotal role in Rainey’s career, has passed on.