There are certain accepted truths about the Isle of Man TT: it’s an anachronism and the riders are all mad. While on the surface they might be true, it always seems like they get in the way of the actual racing. And I expected when I arrived for my first visit to the Snaefell Mountain course this year that I’d find a lot of hardened bikers, desensitised fans and jaded journalists, much like you might find in any other form of motor sport. 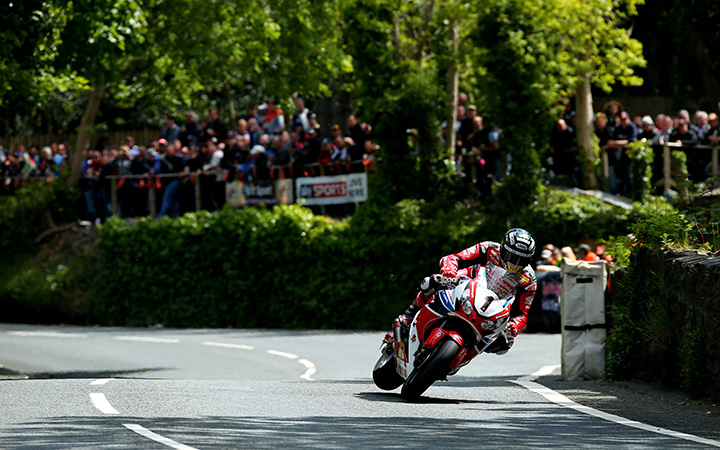 Turns out I wasn’t entirely correct in my assumptions – the adrenaline, fear and chaos of a lap of the TT course permeates throughout the paddock and grandstands around Douglas. The event seems to thrive on it. 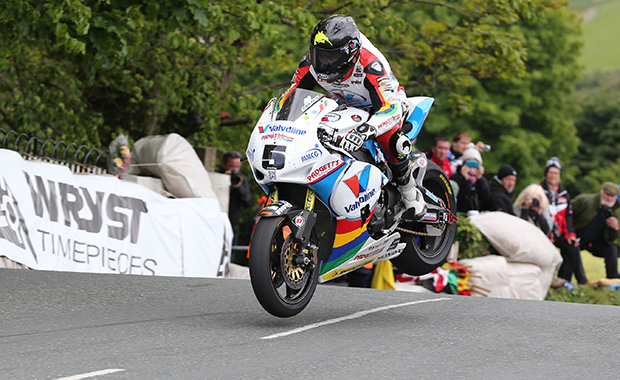 My first real exposure to that atmosphere came during Wednesday’s supersport race. I’d been led down several garden paths (and behind a garage and over a fence) to someone’s front garden on Quarter Bridge Road, just past the dip at the bottom of Bray Hill, where some more knowledgeable fans had set up shop. There they lay in the accommodating owners’ rockery – cushions were provided – hanging their heads out into the road. A road where bikes were coming past at 170mph. Sometimes three abreast. Naturally, I joined them.

Now, at any other motor sport event I’d find this sort of behaviour pretty reprehensible and rallying’s future in this country may depend on people doing less of precisely this sort of thing. But this was the TT, where common sense rarely prevails. After a couple of minutes I decided to get my head somewhere safer, and as I got up, I noticed a familiar face hanging off the garden wall behind some expensive shades. Unable to place it, I asked someone who it was. Reigning World Superbike champion Sylvain Guintoli, apparently, and he was laughing his head off. Everyone gets the bug.

The riders must surely be fearless machines, though. You’d have to be, right?

“To be honest, when I stand on the line looking down Bray Hill I’m thinking, ‘What the hell am I doing here right now? I must be mad’,” says John McGuinness, winner of two races in 2015 and a man with more TT victories than anyone but Joey Dunlop. “I think you know what you’re getting yourself in for, but there is an element of the unknown when you’re up on your back wheel or moving about through crossroads. No lap’s the same and there’s always a gust of wind or a bump that throws you off line. 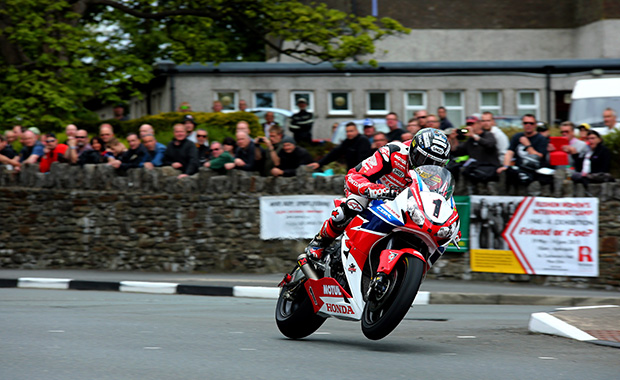 “I don’t know how the hell those bikes go through what they do; you go down Bray Hill at 180mph and everything bottoms out with the belly pan on the floor – we’ve even lost the sump off the engine down there. It’s insane. Ridiculous.

“It’s so narrow as well – tell anybody that we go that fast and they’ll say it’s not possible, but it is. It’s just what we do. We do 170-plus on the start/finish straight on a flying lap, then snick another gear and accelerate down the hill. God knows what we’re doing, but that’s the challenge and it’s what we’re paid for. I’m grateful when Friday comes and I’m in the pub.”

It’s comforting to know that these riders, who routinely commit acts of superhuman skill and stamina, are just like the rest of us in that respect.

It’s not an absence of fear that makes someone brave, it’s the will to overcome it and launch themselves into the unknown. According to McGuinness that’s one of the island’s biggest hurdles.

“The bike’s got a full tank of fuel so you don’t really know how it’s going to react on lap one – from the start line it’s scary for me. It’s important to be strong off the line though. Years ago you could sort of settle into a groove and the race would just pan out. But now, the race to Glen Helen [between the ninth and 10th milestones] is so important. 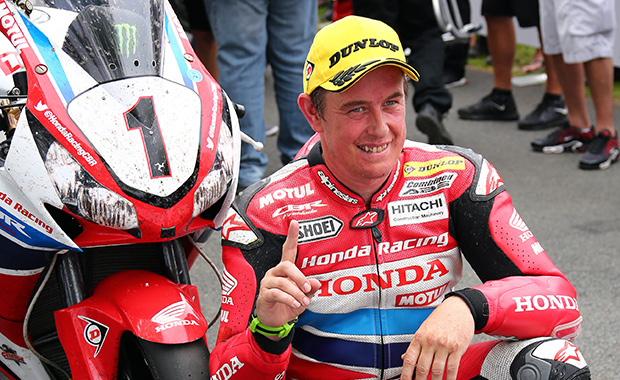 “If you’re not on lap record-breaking pace, you’re not even on the podium, never mind winning the race. There are 250-plus corners and you’ve got to hit every one right, nail all your apexes, be bang on line and confident with everything. If you’re weak in one bit, the boys’ll have you.

“If you drop 15-20 seconds on the first lap, you just ain’t getting that back. You might make three or four seconds back in the pits if you have the best stop of the race, but you can’t pull 20 seconds back on people like Hutchy [Ian Hutchinson], Michael Dunlop or Bruce Anstey. The depth of the field is huge and there are usually 10 of us that can win.”

Conor Cummins, McGuinness’s Honda team-mate and a Douglas native, sums it up: “To the average Joe it’d probably be like waking up in the morning, jumping in your car and going down the M6 at 200mph.

If you’ve seen the documentary Closer to the Edge, you won’t have forgotten what happened to Cummins at the Verandah corner in 2010, where he flew off the road at 150mph and tumbled down a hill. A potential winner that year, he suffered serious injuries that would give most racers pause, but then again half of the island’s population during race week seems to walk with a limp. Cummins doesn’t dwell on the incident – his biggest concern seems to be keeping his 6ft 4in frame out of the breeze. 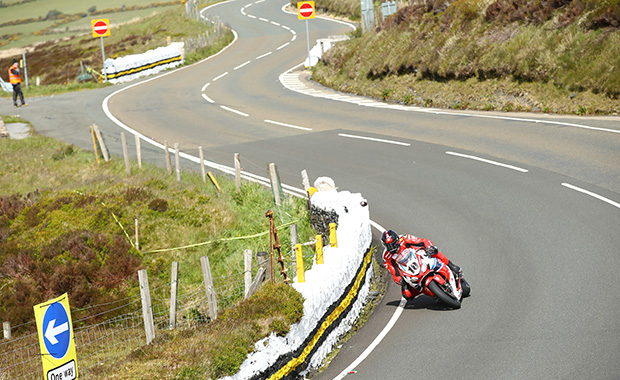 “The rest you get on a straight feels like half a second,” he says. “It’s nothing. For me, being a bit small [laughter erupts from McGuinness and the Honda crew], it’s not the easiest. I want to stretch everything out and there are times when I could quite happily drag my leg for half a mile. But you can’t do it – on a little 600 you can just feel your head scrubbing off speed every time you hit a bump and pop out of the bubble. You’ve got to be tucked in everywhere. And smooth as well, which is difficult. But it’s a side of the TT that I really enjoy. You have to be perfect.

“Every type of bike’s different,” adds McGuinness. “On the big bikes, you can put your head out in the wind and they’ll still pull. But on a 600 you’re even trying to tuck your balls in so you don’t lose speed. Conor gets tucked in well for a big fella. I’m alright, I’m only a short-arse.”

“I do actually tuck my balls in,” replies Cummins.

Thanks for that, guys. 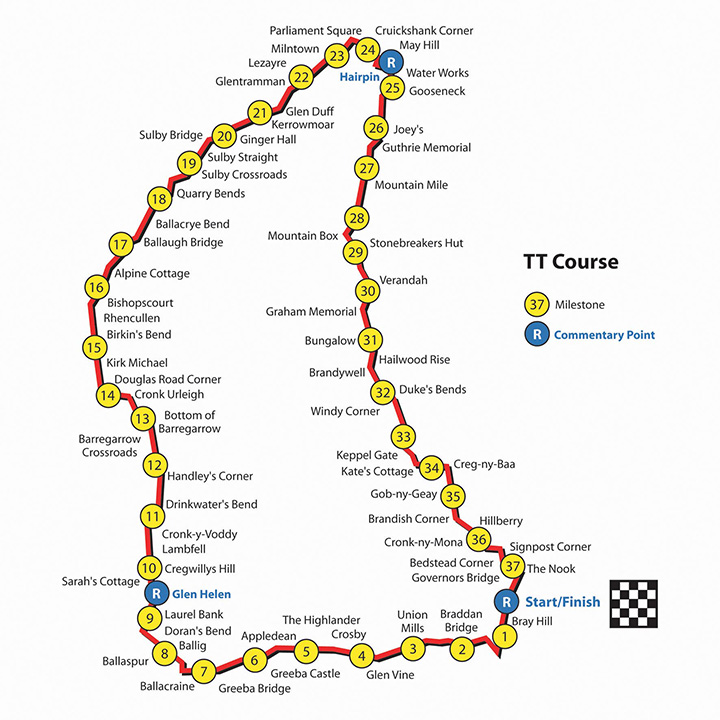 The challenge from one year to the next is to adapt to the track itself, as well as the gradually developing hardware. Plenty of races are held on public roads, but none that take in such drastically different surfaces in such quick succession. The riders end up putting a lot of faith in the tyres.

Something was working this year; McGuinness set a new lap record of 132.701mph in the Senior TT and had several other riders breathing down his neck for the honour.

“The tyres are unbelievable,” he says. “The forces and the power going through that contact patch on the rear are just insane. I’ve been part of the Dunlop programme since 2005 so we’ve spent 10 years developing this tyre. The past few years it’s been the most successful, for sure. I’m proud of what we’re working with and what Dunlop has achieved.

“At the end of the day you have to feel comfortable, safe and confident with a tyre. Apart from brakes, they’re the biggest factor on a bike. Without them you ain’t going anywhere.”

Even minor changes in set-up can spell disaster. On the Thursday of race week I ended up on a coach trip around the course with Richard ‘Milky’ Quayle, a Manx rider casual fans may remember from Closer to the Edge.

Milky was racing in what he knew would be his last TT in 2003 and crashed when his shoulder clipped a wall on the inside of a corner. The bike turned in quicker than he expected and at 160mph… well, you can imagine how it ended. Along with a laundry list of broken bones, he’s also now minus his spleen.

One of Milky’s jobs these days is coaching newcomers – he knows the place so well that even at slow speeds he can still predict every bump on the road without looking a couple of seconds before we hit it. If I transcribed everything he said on that trip it’d be a stream-of-consciousness guide to some country roads, punctuated with bike impressions, but one point stood out:

“With a lot of lads, you can see they think they’re above it. But it’s a three- or four-year process. You can’t come here and rule the world.”

A fear of the place, or at least the knowledge and respect for what it can do to you, is all part of what makes a successful TT rider. That and balls.