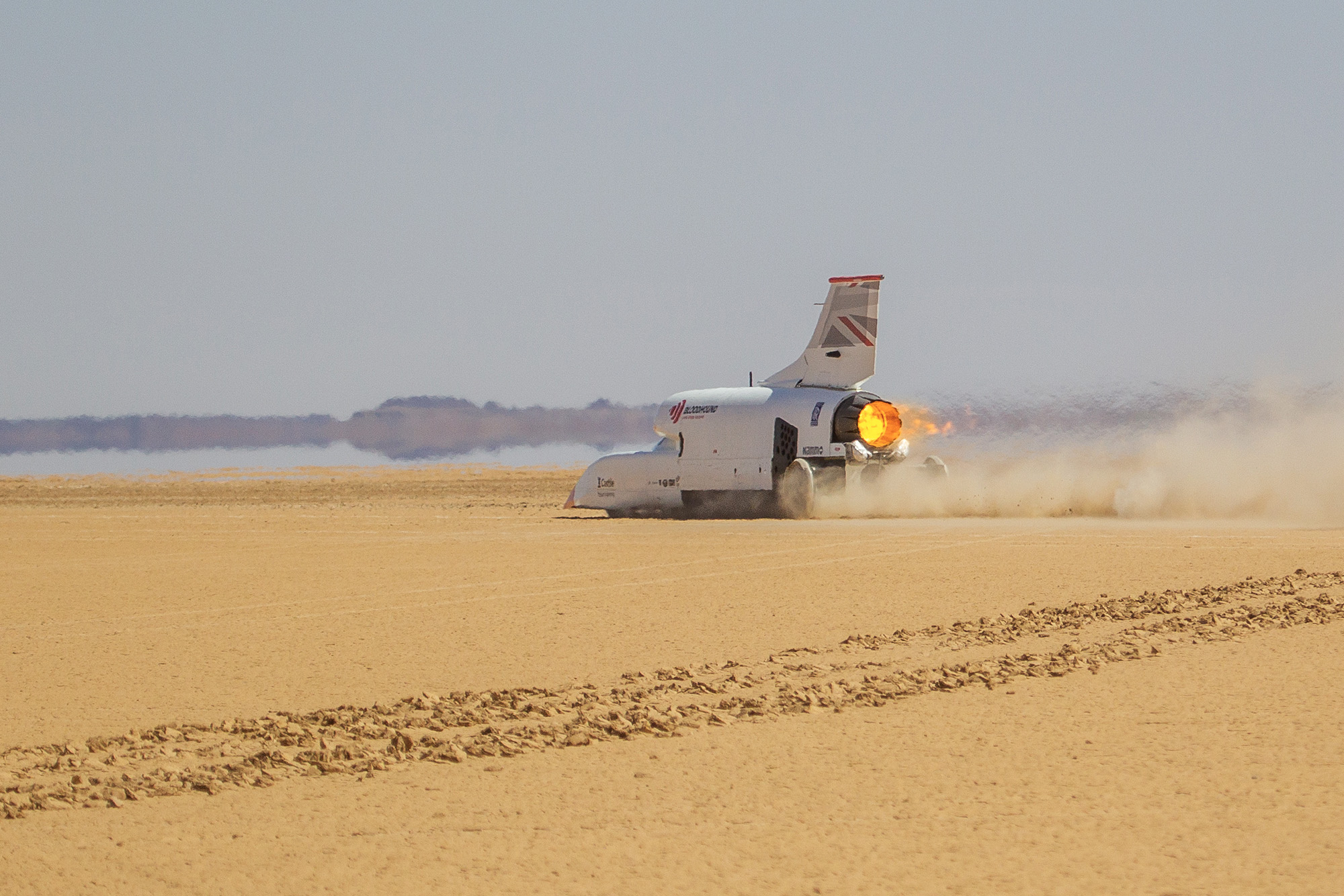 Bloodhound at the start of its 501mph run at Hakskeenpan Photo: Charlie Sperring

The Bloodhound land speed record car hit a top speed of 628mph this morning, during its latest test in South Africa,

There was no misfortune during its 13th run at Hakskeenpan, as driver Andy Green exceeded 600mph and 1,000km/h for the first time, continuing preparations for a record attempt in 12 to 18 months’ time.

Since a series of repairs to the bodywork and recalibration of an engine sensor at the weekend, the Bloodhound Land Speed Record (LSR) team has taken the car far beyond its 500mph testing target.

Green recorded a 562mph run on Friday (watch it below) and was back out early this morning to break the 600mph barrier, using the car’s jet engine alone.

Once testing is over, the car will return to Britain where it will be fitted with a rocket to more than double its thrust for the full record attempt.

Bloodhound’s speed tests are taking place on the dry lake bed of the Hakskeenpan in the Kalahari desert, where the Bloodhound LSR team hopes that it will eventually become the fastest car in the world, beating the current record of 763.035mph, set by Green in Thrust SSC in 1997.

They mark the first time that the car has been driven since 2017 when the car hit 200mph on the runway at Cornwall Airport, and have been highlighting the difficulties of land speed record attempts.

As testing speeds rose above 400mph, the extreme aerodynamic forces began to bend and twist a section of the car’s titanium bodywork.

“The issue was with an ‘into wind step’, which is an area of the bodywork that high speed air and desert grit blasted into at such a rate on this run, that it peeled back a corner, up to the first rivet,” said Mark Chapman, the project’s engineering director.

“The Fabrication Team are trimming the 30mm long piece of titanium off before they bond and rivet a patch to cover the area.”

The team noted after the seventh run that damage to the rear of the car was inflicted by impact damage caused by debris originating around the front wheels.

After a week of preparation on Hakskeenpan, Bloodhound’s Rolls-Royce EJ200 jet engine was fired up for the first time in South Africa at the end of October. It’s the only engine needed for the test; a rocket will also be needed for the land speed record attempt.

The testing programme marks the first time that the car has been driven since 2017 when the car hit 200mph on the runway at Cornwall Airport.

Since then the Bloodhound Land Speed Record (LSR) project was rescued from administration last December by businessman Ian Warhurst. The car’s distinctive blue and orange livery has been replaced, but the tail fin with the names of 36,000 supporters has been recreated.

The current programme gradually built the speed of the car towards the target of 500mph to gather vast amounts of data on how the car behaves as it accelerates and slows down from these speeds.

The wheel brakes, airbrakes and drag parachutes were deployed to slow the car to assess their effectiveness and their impact on stability. Across the car, there are 192 pressure sensors to measure airflow and to ensure that it matches up with CFD modelling.

Now that the target has been hit, testing is continuing, while the weather holds, with speeds increasing beyond 600mph.

Once complete, the team will return to Britain to analyse the data and make any necessary adjustments ahead of a bid to Thrust SSC’s 763.035mph benchmark.

The car will also be fitted with its monopropellant rocket for the full record attempt, again in the Hakskeenpan desert, which is planned for 12 to 18 months’ time. The rocket will add 120kN of power to the jet’s 90kN. 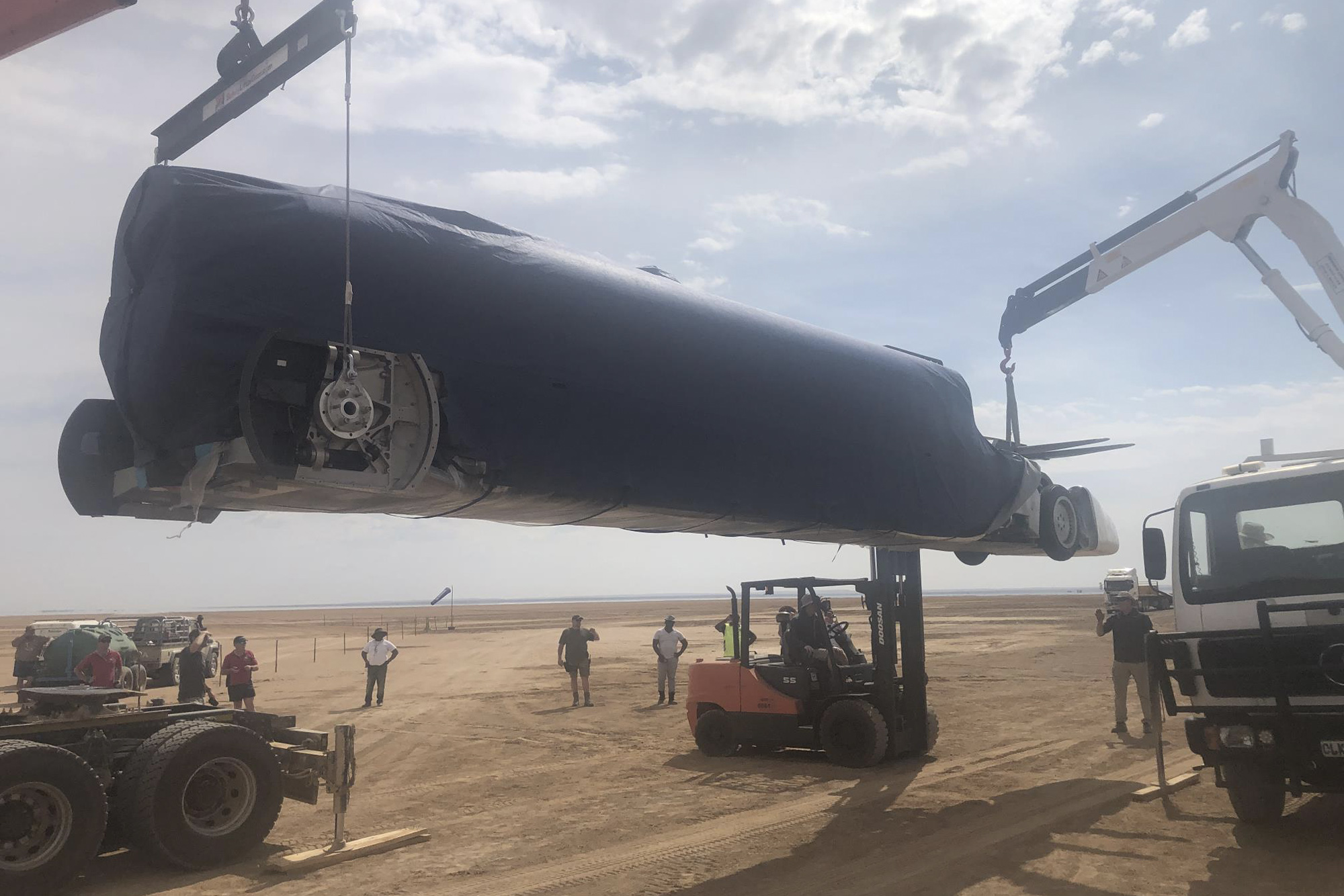 The 6.4-tonne Bloodhound LSR was transported to South Africa via air freight in order to protect it against any uncontrolled shocks in transit, and then rebuilt in the desert, which included fitting its bespoke aluminium wheels.

These weigh 95kg each and are capable of spinning at 10,200rpm: up to four times faster than those of a Formula 1 car at top speed.

The speed that Bloodhound is capable of reaching will mean the wheels will rise to such an extent that they will act more similarly to the rudders of a speedboat as it nears top speed.

Bloodhound LSR engineering director Mark Chapman said the process of converting the car to be able to run in a desert has required an incredible amount of work.

“Transforming Bloodhound from a runway spec car to one capable of reaching speeds in the transonic range on the desert racetrack has been no small task. The team of engineers, craftsmen, fabricators and technicians have pulled out all the stops to upgrade the car in just a few months since the rescue from administration last December.”

Preparation of the desert was no small task either: testing requires a 250 metre-wide, 10 mile-long section of the dry lake bed, cleared entirely of debris. A total of 16,500 tonnes of rock were cleared from 22 million square metres of ground by the local Mier community.

The area allows the car to run up to 25 times, on parallel tracks. It can’t run over the same piece of ground twice, as the mud surface breaks up as the car rolls over it. 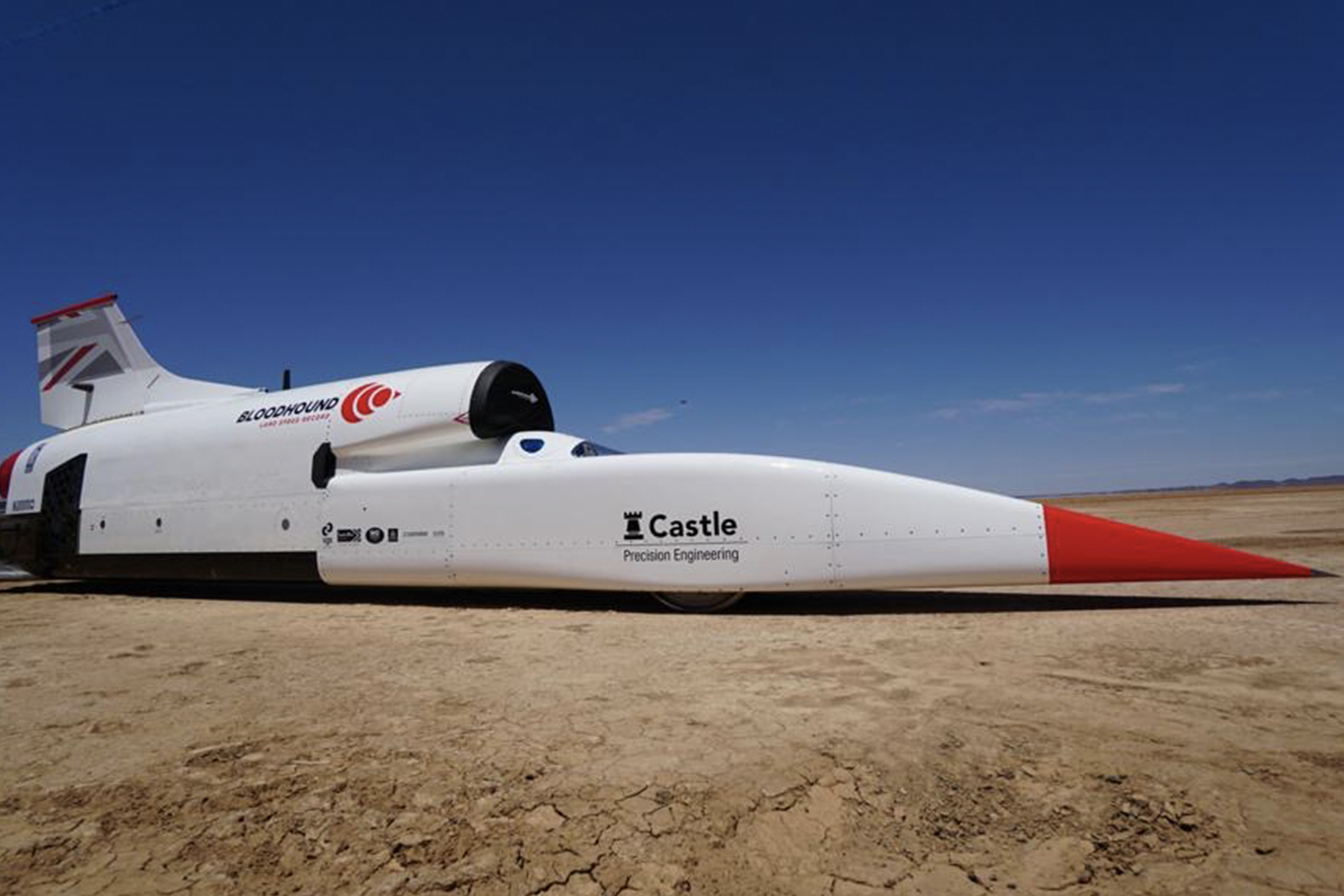 Although Bloodhound LSR is expected to be capable of breaking the current land speed record, the team is not planning to aim for the original goal — of a 1,000mph speed — during the car’s initial record attempt in 12 to 18 months’ time.

If it does succeed in setting a new land speed record, the data from those runs will be reviewed before a further attempt is made to hit 1,000mph.

This article is being updated as testing progresses so some comments below refer to earlier versions.