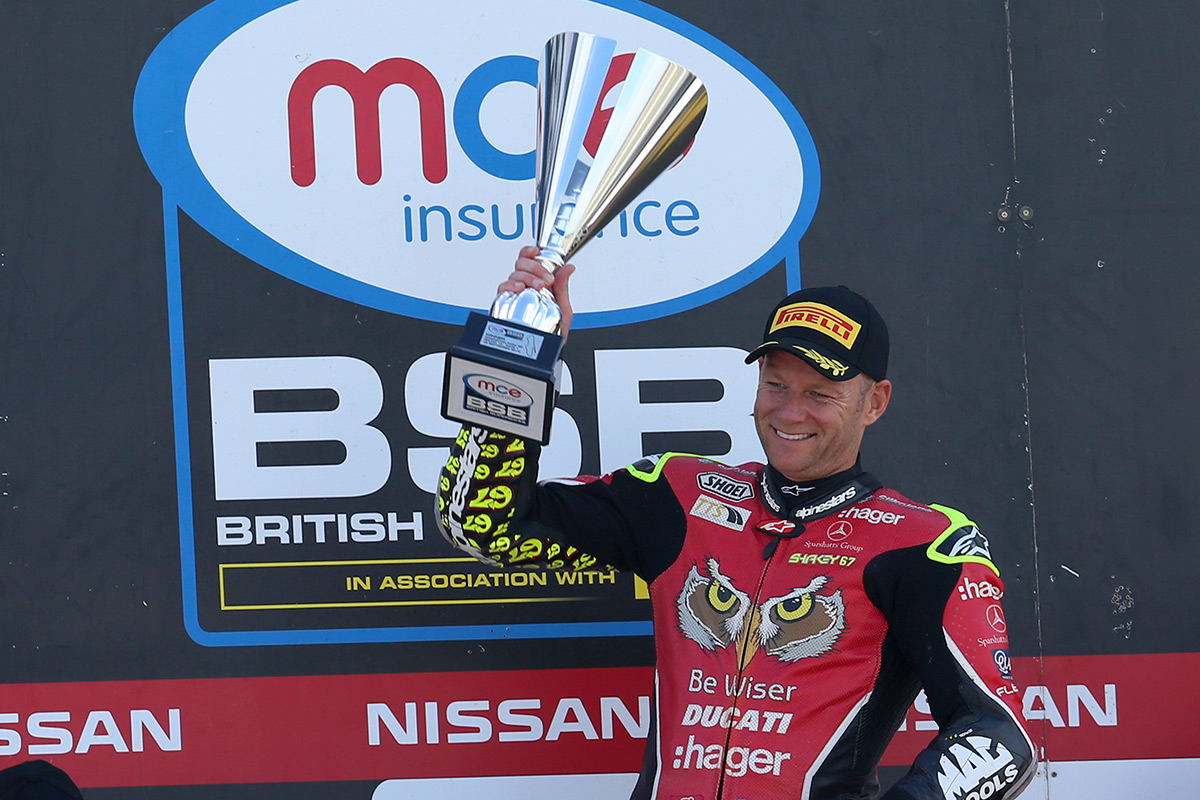 The first round of the Showdown couldn’t have gone any better – and now I’m determined to seal my fifth championship title.

We went to Donington three points behind and came out 27 points ahead thanks to two fantastic wins. Donington is Leon Haslam’s home track so he has practiced there more than any man on the planet; I was delighted to get the better of him.

We worked really hard in practice and qualifying to make sure we were in the best shape possible, but the weekend actually started really badly when I had a big crash during a wet session on Friday. The team had just built me a brand new bike and I’d smashed it to pieces.

Fortunately, I was not hurt. Motorbikes can be rebuilt, riders can’t.

I managed to qualify in second place, which was fine, and we went for the zero tyre which performs better the hotter that it gets. Leon went for the number one tyre which is better when it’s a bit cooler. I knew I had to push it from the word go and I managed to get to the front and set my own pace.

In the second race I managed to get out to the front again and I wasn’t sure whether Leon had crashed out. There are three or four rows of information on the pit boards so it’s not easy to take it all in at 150mph. I thought I saw ‘LH out’ but couldn’t believe it until the race was over and I had won. It terms of the championship race, it was excellent news.

I have been in this position on a number of occasions over the years. In fact, I went to Assen 27 points up once and came out behind, so I’m certainly not taking anything for granted. It only takes one mistake, one crash and things can change quickly. People always tend to find form at the end of the season because they need a job for the following season. It’s a cliché, but being at the top makes you a target. All we can do is concentrate on ourselves.

We head to Assen this weekend, which can be a tricky one because you never know what the conditions are going to be like. It can be wet in places and dry in others. If we can get two wins then great, but if not we need to lose as few points as possible to Leon.

People ask me if you lose a bit of competiveness after so many years of competing, but for me it’s entirely the opposite. The first title felt great, but so did the second, third and fourth. The novelty doesn’t wear off. The fifth would be another sentence in the history books. I am already the most successful rider in British Superbikes but I want to make sure that when I do finally retire, my record is hard to beat.

As I’ve got older, I’ve not necessarily trained any harder, but I have trained smarter. On Monday this week I was at Brands Hatch for a track day and cycled there and back, so that was the best part of 80 miles. I am 40 in December but feel as good as ever.

It was great to be joined at Donington by my good friend Kell Brook. I had a chat with him the garage and I told him that boxers always impress me but the pounding he took from Gennady Golovkin was phenomenal. I just don’t know how they take that sort of punishment. Hopefully I’ll get him on the back of a bike at Brands Hatch soon, which would be great.