While spectators took in the atmosphere and on-track action, Ed Foster spent the Goodwood Revival scampering along the start-line to interview the drivers — broadcast live to an audience of millions… 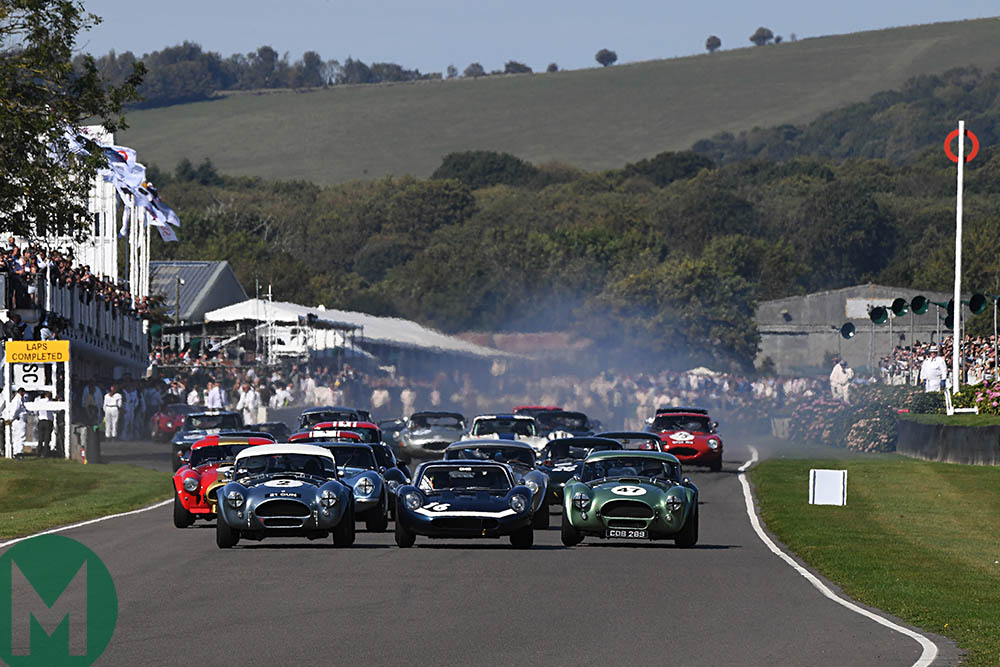 The RAC TT gets underway at the 2019 Goodwood Revival Photo: Motorsport Images

“Just make sure,” producer Steve Ancsell says to me, “that you don’t ask a question that they can reply to with a ‘yes’ or ‘no’”.

We’re at the 2019 Goodwood Revival and the Settrington Cup – the pedal-car race for children under the age of 11 – is about to start, and I am prepping myself to interview the podium finishers. Never before have I been quite so apprehensive. Drivers, riders and team members know the score – you ask a question, they reply with an insightful, 30-second reply. Children rarely do. My colleague Tom Clarkson was in the middle of interviewing Louis down on the startline.

“How old are you Louis?”

“I’m three but my father said I need to say four!”

It was a wonderful interview, but you don’t often get such long (or witty) replies. And how many questions are there which won’t garner a one-word reply? 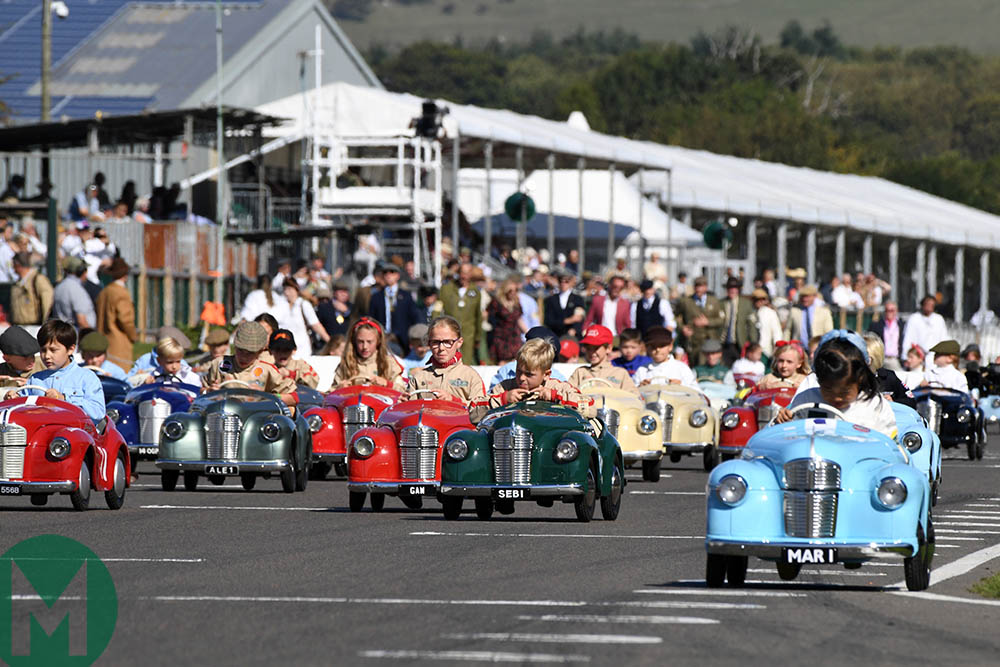 I was asked to do the Assembly Area and podium interviews for this year’s Members’ Meeting. My friend Henry Hope-Frost sadly died before the 2018 event, and Bruce Jones couldn’t make it. As one person said, “there’s literally no one else, Ed!”

Henry was brilliant at the Assembly Area role, and a large part of me didn’t want to do it. There was no way I’d ever be as good as him. It sounds glib, but I do think he would have told me to crack on with it. “Stop being a ****, Ed. Have you got any biscuits?” No matter the preparation, it was a baptism of fire. Especially when it came to the live interviews.

André mentioned that he probably sweated out all the booze from the party the night before. Not good on ITV. Neither were the cigars they were holding.

In my ear I’ll hear the director say “OK, we’re going to go down to Ed on the startline in 15 seconds”. Steve will help me gather the right people but, having just finished on the podium at Goodwood, they’re usually being congratulated by team members, being soaked in champagne, getting a cigar, or being adorned with a wreath. The last thing they want is to look up at a 6’ 7” giant and have to explain their race.

“Right, throw to Ed in five, four, three, two, one…” The joys of the startline at Goodwood is that it’s lined with tannoy speakers, and these send out what you’re saying three seconds after you say it. The earpiece does the same, just two seconds later, and I weirdly found myself slurring my words. Quite quickly I pull the earpiece out. Amazingly, it runs pretty smoothly, despite the whole thing being done in one take, which means you have to go hunting for the second- and third-place finishers live on the big screens and to millions of people around the world on the live stream.

The Assembly Area interviews are fewer and further between when the racing gets going as I need to watch the race in order to (hopefully) ask pertinent questions to the podium finishers. I retreat to ‘The Shed’ next to the startline, which is as glamorous as it sounds. Two metres wide and long, it is filled with Goodwood’s Motorsport Content team, two chairs, stale lunch bags and the best view of the start in the house. 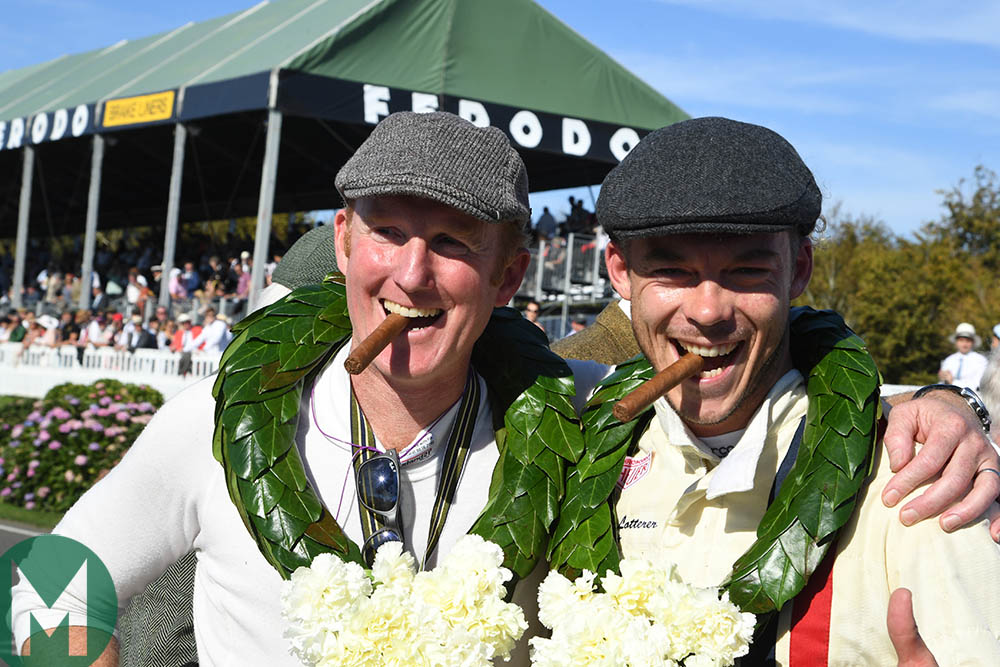 And what a race it was – the safety car may have ruined some peoples’ races, but it put Lotterer/Wilson, Shepherd/Dumas and Bryant/Turner in the pound seats. It was the former that emerged victorious when Dumas’ tyres faded, and Bryant ended in the barrier. There were cheers when the lead changed hands and thumbs up when a new pairing had won the TT.

Interviewing winners André Lotterer and Chris Wilson live on ITV1 was quite easy – they had just won the RAC TT. However, André decided to mention that the stress of the race probably meant he sweated out all the booze from the party the night before. Not good on ITV. Neither were the cigars they were holding. We did a retake one minute later, which was patched into the live stream just in time.

The best interviews from the 2019 Revival? Bill Shepherd, who was sharing his V8 monster, the Battlebird, in the St Mary’s Trophy with Romain Dumas. “What did Romain think of the car in qualifying?” I ask. Bill then proceeded to do a wonderful imitation of the Frenchman: “It eeez a little different, no?” It was also great to chat to Dario Franchitti before he headed out onto the track for his first competitive action since 2013. There was absolutely no hiding the excitement in his eyes. A special mention must go to my chat with 5’ 2”, 51kg Dani Pedrosa. There were plenty of photographers there when I was interviewing him after the riders’ briefing: 99.9 per cent were there because it was 31-time Grand Prix winner Dani Pedrosa, but I knew 0.1 per cent was there because of the differences between us: 59kg and a foot and a half. 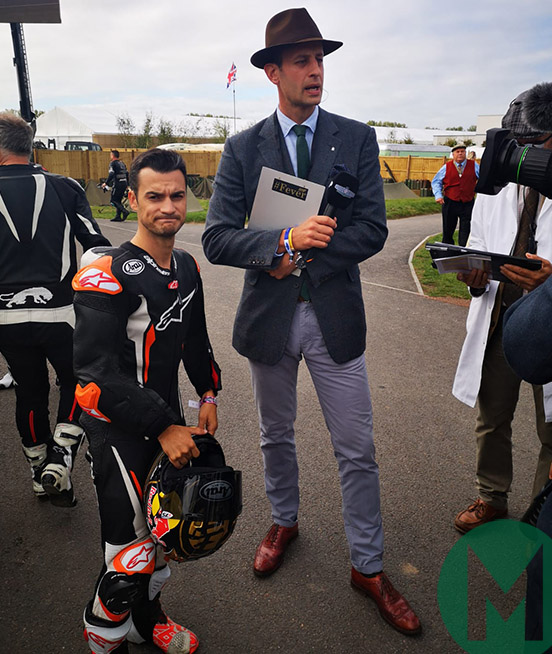 The event itself is a marvel. The amount of planning and work that goes into the events from the 700-odd full-time staff is astonishing. Days of meetings are spent discussing what the Drivers’ Club could look like, what the Gate 2 celebration could be, and what cars should be invited. Yes, we need the best cars for every race, but there needs to be a race. If one car disappears, it’s not that interesting…

As for the Settrington Cup, after speaking to the winner and runner-up, I got to the third-place finisher and had run out of questions which would stop a one-word answer. “Did you enjoy it?” I asked lamely. Silence. Fill, fill, fill! What is it they say? Never work with children or animals.