The Ford v Ferrari battle at the Le Mans 24 Hours race of 1966 was a personal feud between Henry Ford II and Enzo Ferrari that played out on endurance racing’s grandest stage, the story dramatic enough to warrant a Hollywood telling of the story that took Ford to the top step at La Sarthe.

The early 1960s was dominated by Ferrari but, behind the scenes, Enzo Ferrari was in the process of putting the famous brand up for sale. And it had attracted the attention of one American businessman in particular.

An incensed Henry Ford gave the command: ‘You go to Le Mans and beat his ass.’

With a desire to win the most prestigious endurance race on the motor racing calendar, Henry Ford II’s ambition coincided neatly with Ferrari’s apparent willingness to sell. Diligence was carried out, money offered and the transaction drawn up.

After 22 days of negotiations, and with a waiting army of Ford lawyers and engineers that had flown out to Italy, the deal was close to being signed. But at the last minute, on May 20, 1963, il Commendatore showed the squad of Ford personnel the door. 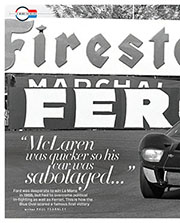 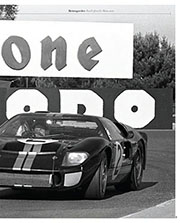 Despite an offer that consisted of eight figures, Enzo wasn’t prepared to accept Ford’s condition that he would need to seek approval for any spending increase by the racing team. He turned to Franco Cozzi, his personal secretary at the time, and said: ‘Let’s get something to eat’, leaving the accrued Ford representation to retreat to the US empty-handed.

It was the day that the Ford GT40 was born.

Ford returned to Detroit and regrouped. The rebuffed multi-million dollar offer would lead to the birth of the famous sports car and the American powerhouse dethroning the Italian brand on the track.

Retaliation by racing, beating and hopefully humiliating Ferrari in Europe and chiefly, at Le Mans, was the overarching ambition for Ford, an expensive and ultimately controversial one at that. An incensed Henry Ford gave the command: ‘You go to Le Mans and beat his ass.’

Leo Beebe, Ford’s racing director, was the conductor and problem solver. Henry Ford’s right-hand man in the pursuit of Ferrari was tasked to oversee and ensure the Blue Oval achieved overall victory at Le Mans and endurance racing’s other premier events, including Sebring and Daytona.

The project began almost immediately, and it soon turned to obsession as more millions of dollars were pumped into the project: determination, revenge and perhaps slight desperation the driving force.

Initially, Eric Broadly of Lola was tasked by Beebe with producing a Ferrari-beater. A succession of retirements and thin patience meant control of the project was then handed over to Shelby American; Carol Shelby heading up the new Kar Kraft division dedicated to the GT40 operation.

Shelby drafted Ken Miles into the fold. A renowned tester, his role in the development of the GT40 was crucial, though the path to the top step of the podium wasn’t smooth.

The 1965 Le Mans race — the second to feature GT40s — put Ford on the edge of breaking point, with each of the GT40s suffering retirements relating to poor reliability while Enzo’s Ferraris took victory.

Operations were then shifted between Shelby Automotive and Holman and Moody in the United States as well as Alan Mann Racing in the UK. There was infighting but, under the mediation of Beebe, the competitive atmosphere meant that intense development of the GT40 followed, creating the MkII.

Mann constructed three GT40 entries to Ford Advanced Vehicles specification, with Shelby and H&M separately responsible for another three MkIIs each. The competition for Ford’s primary backing led to frayed relationships between the Ford teams, with each entry desperate for the majority of the funds to be directed toward their efforts to become the winning Ford.

That competition bled from the teams to drivers also, with Jerry Grant, team-mate to Dan Gurney, explaining in Twice Around the Clock: The Yanks at Le Mans: “The real competition was between the Ford drivers…our main concern was beating the Ford drivers from the other camp. If a Ferrari beat you, you always had that ‘well, it was a Ferrari’. But if a Ford beat you, it was the driver.”

Six privateer entries also competed as ultimate effort was afforded in the third attempt to steal away endurance racing’s crown jewel from the Prancing Horse.

20 tons of spare parts, equipment, dedicated car and crew that had the backing of Ford Motor Company behind it all were dispatched to La Sarthe.

Henry Ford, honorary starter in ’66, waved the flag to open the chapter of the story he had been so desperate to author.

Leading from the start, Fords quickly established a lead, although Ken Miles’ collision with John Whitmore’s Alan Mann Racing Ford brought him into the pits at the end of lap one.

A quick slam of the door was all that was needed before he was sent on his way once more.

Ford headed the field after hour one in a 1-2-3, Dan Gurney leading the charge of 13 GT40s, brought to ensure that at least one would win.

The Gurney/Grant Ford battled for the lead throughout the night, but retired through an engine issue following temperatures that skyrocketed in the morning, leaving Miles to push on.

As the race wore on, the fleet of GT40s slowly dwindled to leave a three-pronged attack, but Ferrari wilted too, succumbing to the brutal pace of the leading MkIIs. The final Ferrari P3, in the hands of Lorenzo Bandini and Jean Guichet, submitted to a nagging water leak and clutch failure.

It left the No1 Mk II of Miles and Hulme out front leading the American effort and victory virtually assured for Ford.

Without any real challenge,  Beebe began to put plans into action that were intended to see both leading Mk IIs cross the line side-by-side in a dead heat.

The ideal photo opportunity that would underline Ford’s dominance against the competition, positive publicity would not be squandered.

Miles pitted shortly before the finish for a planned change of brakes and resumed shortly afterwards. He would be in soon after though, reporting a brake vibration, his lead dwindling by the second.

And then farce. The team discovered that the car had been fitted with the wrong brakes and would have to pit yet again. Failure or conspiracy to ensure the photo finish? Either way, it allowed Bruce McLaren to pass in the No2 GT40 and, in doing so, rejoin the No1 Ford on the lead lap.

Miles’s previous four-lap lead had been decimated, as had his confidence; the Briton believed that higher-ups at Ford wished to see someone else the victor.

Although initially receptive to the idea of an unprecedented ‘draw’, organisers stated that the No2 Ford would be declared winner in such a dead heat, courtesy of the extra distance covered, having started further down the grid than the sister car of Hulme and Miles.

The decision was unbeknown to the drivers, and the top three approached the finish line as instructed, McLaren door to door with Miles as Dick Hutcherson followed, the third-place car in tow.

Depending on the source, the Kiwi accelerated to the flag / Miles backed down in protest of the falsified finish, handing the win to No2 Ford.

A furious Miles was classified second – believing he was the victim of a grudge by senior Ford team members.

Amon and McLaren stood atop the podium flanking a jubilant Henry Ford, champagne in hand.