Standing in the pitlane amid a brace of Mercedes-AMG GTs, the odd Audi and the Glickenhaus from the VLN, I’m told he’s just warming it up.

‘He’ is Timo Kluck, born nearer to the circuit than it is long, with innumerable laps under his belt. ‘It’ is a Porsche 911R on Dunlop’s new SportMaxx Race 2 road tyres. The pitlane is the slightly aging one of the Nürburgring.

The 911R has a reputation, not all good. A stick-shift Porsche 911 of impressive scarcity, it’s been designed for drivers. No garish GT3 wing, just clever tricks of aerodynamics beneath the car and the badge differentiate it from a standard 911. The bad bit is the price. Not Porsche’s, it should be pointed out as they sold it at ‘just’ £137,000. It’s the buyers that have cashed in. One was advertised recently for more than £1m – the meteoric appreciation doesn’t need pointing out.

It arrives, suitably warmed, and I’m strapped in. No harnesses, just a normal seatbelt. Best to hold on, then. 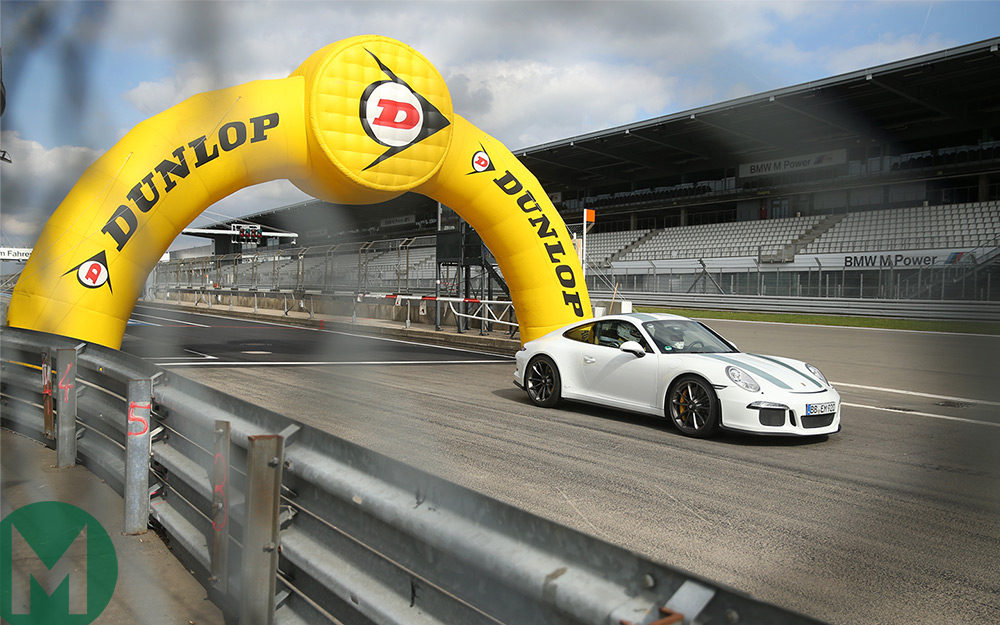 Trickling to pit exit you know what’s coming but the acceleration still pushes your head back towards its appointment with the headrest. Round a few corners of the GP circuit you know the left-hander onto the Nordschleife is coming up, but it looks little more than a hole in the wall.

The gap fits, and you’re barrelling left onto the graffiti-marked tarmac of all colours. It’s instantly claustrophobic. The walls creep into your periphery, and remain there as a permanent reminder of their peril.

Then the trees are a further stark reminder, a sobering one. Thoughts incredulously turn to the likes of Jackie Stewart bombing through at fierce speed strapped to a thinly covered tub that is ready to burst into flames at the very first opportunity. You realise, while you’re bouncing around the seat, that this is the Nordschleife-lite, the army of encroaching trees on both fronts have been pushed back to a ‘safe’ distance, Armco protecting the passing drivers from the waiting trees behind.

Kluck seems on the limit, but his Dunlops barely budge. No luridity, though minutes before he’d pointed out he drives at a comfortable pace for him and passenger. Yet he’s late on the brakes, and the throttle is buried into the footwell as long as it feels possilbe – and beyond.

He’s forever busy, turning this way and that, modulating the throttle, changing down and down, planting the throttle and punching back through the gears. Tutting at irregular intervals when he’s unhappy with his last turn, entry or exit. The blind crests and bends take faith he’s built in the past 20 years or so, the car gets feather light over every rise. The back of his hand is more a stranger to him than the ‘Ring, it feels. The road dips and falls away like nowhere else, lifting and depressing the car and your organs for fun.

That the best GT drivers in the world battle for hours in darkness here defies logic, even without 100-plus other cars of varying speeds and driver ability sitting on apexes, dragging dirt onto the circuit, getting all out of shape and generally being in the way. For a second it makes you think the guys at the front of the N24 can’t be human. 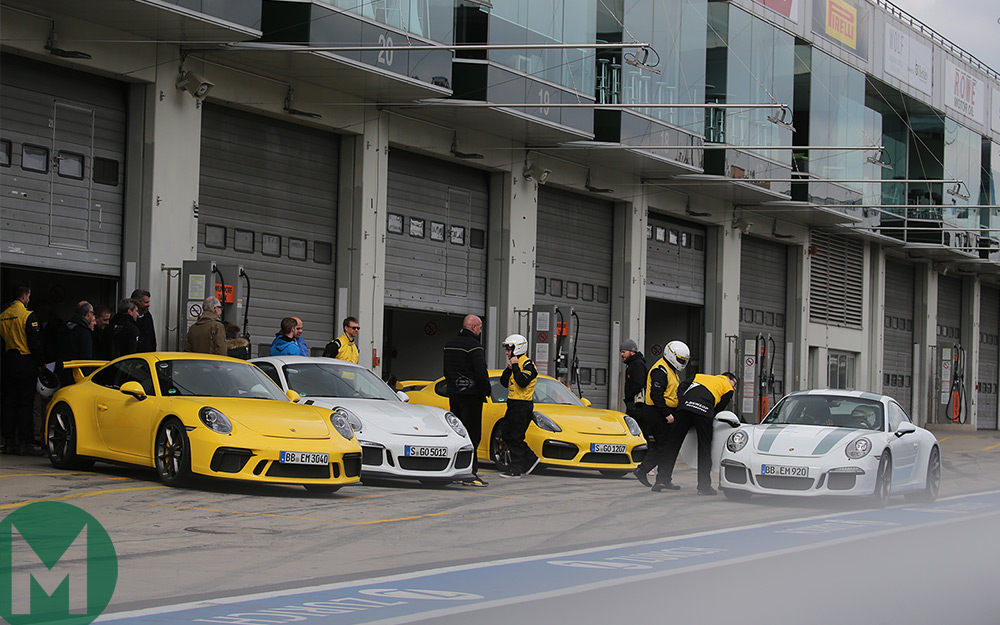 Then the Dorint Hotel peeks onto the horizon and the mad, spectacular, unforgettable nine minutes are almost over. Only now is there time to breathe, and to realise actually that you’re a tad queasy. The strap of your lid has been digging in. At no point has any of this been anywhere close to crossing your mind, there’s been no room for anything but frightful admiration and huge grins.

“I don’t drive on weekends anymore,” he says on the half-lap of the GP circuit that ends in the pitlane entry. “I haven’t done the 24 Hours for many, many years.” Now his focus is on testing Porsches, 80 per cent of which is focused on tyres.

Recovered, the 911R rolls to a stop to collect the next eager passenger.

Maybe they are human after all.