The cancellation of Wales Rally GB this year, for the first time since the foot-and-mouth crisis of 1967, wasn’t exactly a shock even if it is sad news for one of motorsport’s greatest and most historic events.

Trying to organise and run an event across a large part of north Wales and north-west England involving many thousands of spectators, not to mention the logistics of welcoming incoming visitors from abroad, is tough in normal circumstances. It seems a mind-boggling impossibility right now. Running race meetings within the confines of a circuit, whether it be a grand prix or a British Touring Car Championship round, is one thing; it’s quite another to put on an international rally that can’t really avoid covering large tracts of public ground and the mass movement of a significant amount of people.

Has the call been made too soon? After all, the national picture might be very different by the event’s scheduled date on October 29-November 1 – oh my, let’s hope so – but clearly life will not return to any semblance of normality any time soon. This was a big decision not taken lightly, but for David Richards and his team at Motorsport UK we’d argue it was correct to act decisively now, show leadership and take the most responsible course of action. Of course, people’s lives and businesses revolve around this sport, and the loss of Wales Rally GB will have an economic impact – but health and public safety must always come first. 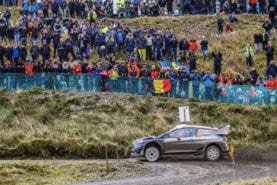 The decision leaves the rest of the 2020 World Rally Championship in serious doubt. Wales Rally GB joins Finland and New Zealand as the events most recently scratched from the schedule, with Turkey at the end of September now set to be the first to break the hiatus. But will the country really be ready to host its rally, even if it succeeds in opening its proposed ‘air bridge’ to the UK to allow tourists in from July? As with just about everything right now, it’s impossible to say.

The organisers of Rally Germany in October are said to be confident they can push ahead, and the same is said of Rally Japan at the end of the year. Given that three rallies had already run before Covid-19 shut our world down, in Monte-Carlo, Sweden and Mexico, that might allow for a five-round WRC, at a push – but perhaps the best course of action for world governing body the FIA is to take a leaf from Motorsport UK and act now: cancel the season and make the three rounds already completed count for the 2021 championship, creating a super-season similar in format to that already used by the World Endurance Championship.

Elsewhere this week, the World Touring Car Cup announced a heavily revised six-round schedule that will be confined to Europe, starting at the Salzburgring in September and finishing in Adria, Italy in November. So no longer a true World Cup then, but in these extreme circumstances it seems a logical decision, as part of a new cost-cutting drive for teams already struggling with the financial implications of losing so many months of racing. “From the outset we have been very aware of the difficulties Covid-19 has caused existing or prospective WTCR teams,” said Francois Ribeiro, the head of Eurosport Events which promotes the series. “That is why, together with the FIA, we introduced a number of cost-cutting measures to help them.

“These cost savings combined with a Europe-only calendar and our pledge not to reduce the marketing and promotional investment in the series, has led to a number of enquiries from drivers and teams that had not previously considered WTCR. 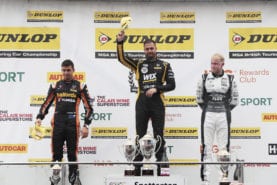 “However, to be fair to the existing teams, only registrations from single-car entrants can be submitted and these new entrants will not be eligible for the 2020 WTCR for Teams, although drivers will be able to score points and compete for a coveted FIA world title. Furthermore, if existing teams wish to submit an additional entry, they can do so but only for a driver who is eligible for the new Rookie classification.”

Back in Britain, the BTCC is ploughing ahead with its plan to run nine of its original 10 rounds, starting at Donington Park on August 2. Teams, drivers and all BTCC personnel will be taking a big deep breath as they face a run of four weekends in August alone.

Will any crowds be allowed at all, or will fans be forced to stay at home and watch ITV4’s excellent live TV coverage? There’s no clarity yet, but as in the outside world any potential loosening of restrictions on public gatherings will rely heavily on personal responsibility for social distancing. If a second wave of the virus was triggered and traced back to a BTCC round, the consequences could be severe – as Alan Gow, David Richards, Jonathan Palmer and all other senior figures in British motorsport know only too well.

No decisions are minor or easy right now. But as Motorsport UK has shown this week, strong and decisive leadership is all we can ask and expect, to protect the public, those who work in motorsport and the future reputation of an activity that is considered all too expendable and frivolous in a wider context. As for the knock-on effects for livelihoods and businesses, the short-term pain of this season is likely to be just the start. Will sponsors have the means to support racing campaigns next season? Will there even be a commercial appetite for motor sport if companies have been forced to make redundancies in their own businesses? Can circuits and venues maintain their businesses if social distancing becomes our new long-term way of life and they are forced to admit fewer numbers to stand on spectator banks and sit in grandstands?

Racers, by instinct, are quick to adapt to changing circumstances. Such proficiency and dexterity of thought and action has never been so vital.