It’s one thing taking on the Dakar desert stages in a bespoke Prodrive Hunter or groundbreaking Audi RS Q e-tron – even a KTM bike or Kamaz racing truck. Vehicles designed and honed specifically to attack those deceptive dunes or treacherous rocky landscapes.

One might posit that the Dakar Classic, the historic rallying event which this year has attracted 127 vintage machines, is one for the enthusiast’s enthusiast. The clubbie’s clubbie. It doesn’t get more hardcore than this.

“You can meet Loeb on the road section – you’re sharing the same bivouac, the same catering” Romain Grabowksi

Romain Grabowksi, one of several people entering the event driving the hammer and sickle’s favoured run around, says “It’s crazy – like suddenly finding yourself part of Le Mans.”

The Classic, for cars made before the year 2000, is run over similar stages to Dakar, but as a regularity rally [the aim being to stick to an average speed] as opposed to setting the fastest time.

First held in 2020 and concurrent with the main modern rally, the Dakar Classic first attracted a tentative 27-car entry. One year on and the numbers taking part have exploded.

It’s one of the few events in the world where amateur entrants rub shoulders with the legends of motor sport, as Grabowksi explained when speaking of his love for the rally. 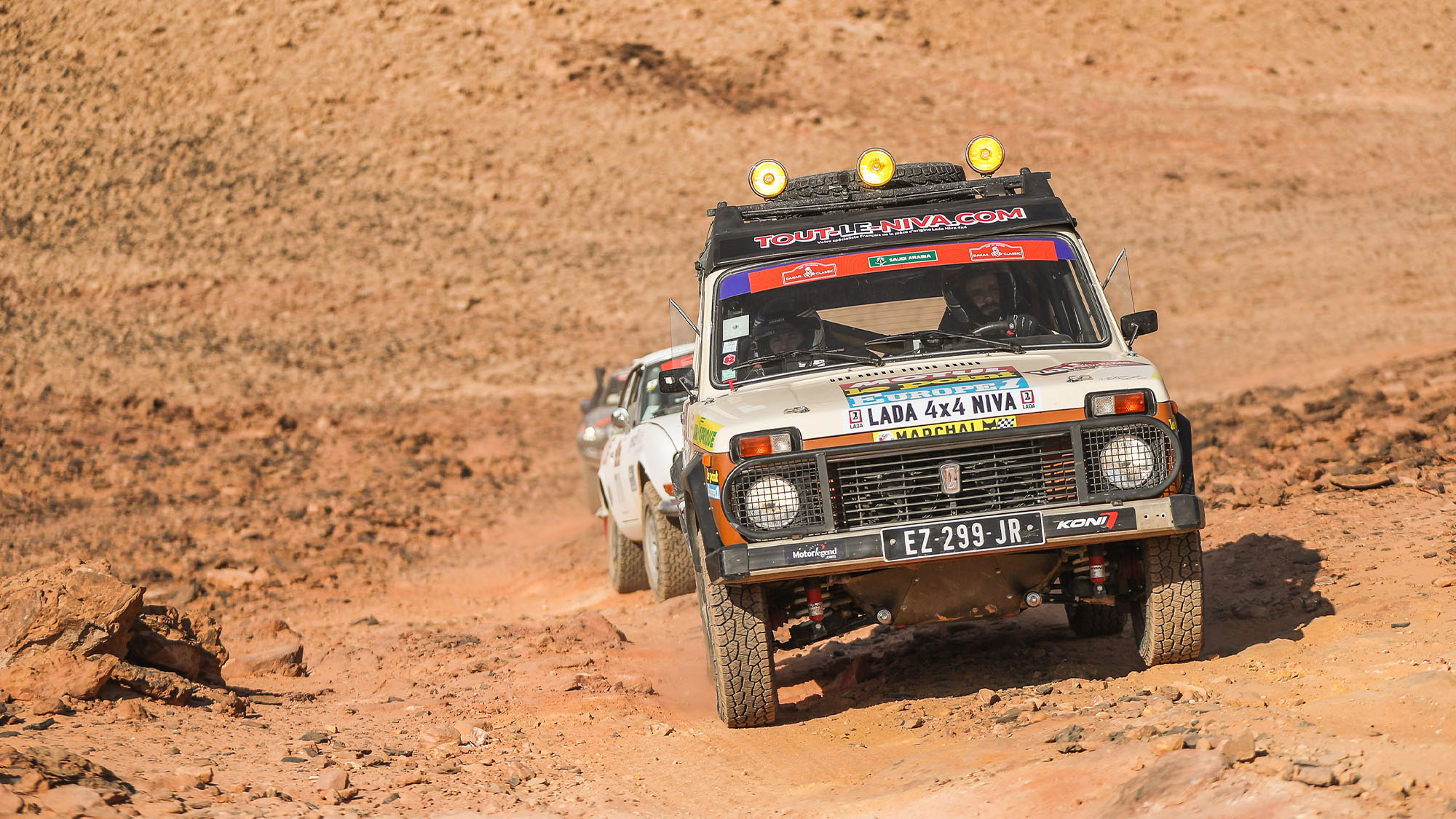 “You watch it on TV, and you see legends like Sébastien Loeb,” he tells Motor Sport whilst recovering in the Riyadh bivouac from another gruelling stage. “Then you come here and you’re sharing the same bivouac, the same catering, you can meet him on the road section. Some mornings you’re on your way to the start of a stage and then suddenly Loeb and Nasser Al-Attiyah come past you like ‘Vwroom!’”

Grabowksi, who is at the wheel of the Niva with his girlfriend Constance Chenard co-driving, describe he and his partner as “project-driven”, but the main reason they’re is entering is to honour the memory of his late father, another rally-mad petrol head who entered the modern Dakar himself forty years ago when it was but a burgeoning tear from Paris itself all the way down to Senegal’s capital.

“Coming here, I have the feeling I’m sharing something with my father” Romain Grabowksi

“My Dad managed to convince someone from his rugby team to do Dakar with him,” he says. “It was only the fourth edition so it was still a bit silly, you know?

“They managed to collect 100,000 francs, a pretty small budget. Because they couldn’t afford a new car, they bought a medical support Lada vehicle which was used at the ’81 Dakar.”

The Dakar in its original form was perhaps the most gruelling event in motor sport (many would say it still is). It comes as no surprise then that his father ran into issues on his first attempt.

“They got some problem in the middle of Mali – satellite phones didn’t exist then!” he laughs.

“They managed to get a lift on a truck back to Algeria, then spent a few nights in a hotel waiting for the boat home.

“One morning they woke and found everything from inside the car had been stolen, no papers, no passports, nothing.

“It was not a happy ending. I still have a newspaper from the time when he was interviewed by a local journalist and he said, ‘I will never come back to the Dakar!’ Of course, he changed his mind…”

Bitten by the rally raid bug, Grabowski’s father would run the Dakar twice more in a Toyota as a support vehicle driver, with the Lada gathering dust in the garage back in France.

Years later, his son would sit by the wheel of the car as a child, imagining himself taking on the dunes and desert in the little Russian hatchback.

Eventually the Lada was sold before Grabowski’s father passed away. His son got the idea to remember his old man in the best way possible, trying to finish the rally he started four decades ago. Purchasing an identical Lada in 2018, which he has gradually built up from photographs and research of the ’81 event to be totally faithful to the original Dakar version, the Frenchman feels he may have had more than a little help from someone looking down on him. 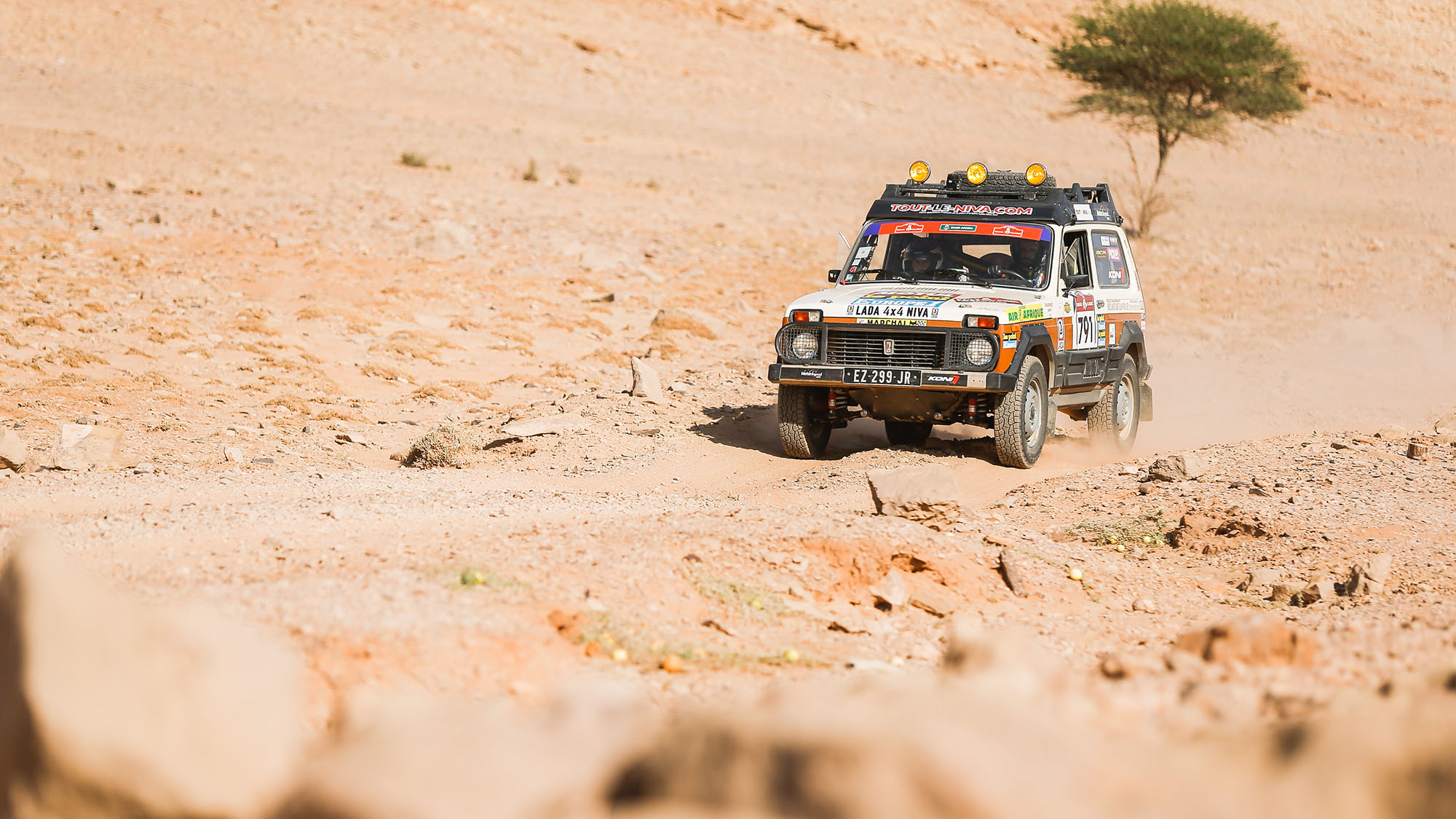 With the help of fellow Lada enthusiasts, Grabowksi managed create a rally car faithful to his father’s – even down to plastic roof mounts

As well as managing to hook up with Christophe Fay’s ‘tout-le-niva.com’, the largest Niva parts dealer in France – who took roughly “twenty seconds”, to be convinced to come along for the ride with a full complement of spares – Grabowksi and Chenard have had other considerable assistance appearing at times as if from nowhere.

“Sometimes when you when you lose someone, you still believe they’re somewhere,” he says. “Coming here I have the feeling I’m sharing something with him.”

“Many times during the project, you had the feeling that at some he was helping us,” says Chenard.

“One day we were rushing to get the car ready in the workshop, it was looking like we wouldn’t make it,” recalls Grabowksi. “A car pulled up, out got a father and his two kids, in their 20s.

“They’d seen our project on Facebook. We were very late on the project, it was mid-October 2021.

“They said ‘We don’t know you, but we’re passionate about the Lada Niva. We would like to help you.

“At first you don’t want these people touching your car, but we realised after about an hour they were extremely talented, nice, passionate. All the qualities you would expect from team members.”

The extra mechanical aid helped Grabowski and Chenard to get to the Dakar Classic, and as of today’s Day 10 are still running successfully, their only aim to make it to the finish.

The bivouac, a hive of activity where teams set up their makeshift garages in between stages, is packed with exotic machinery, and not just curio hatchbacks such as the Niva.

Grabowski admits he and Chenard had to “live, sleep, eat Dakar” to be ready for the event, and it’s the same for all the other amateur entrants:

From 911s to desert Beetles – tales from other Classic competitors 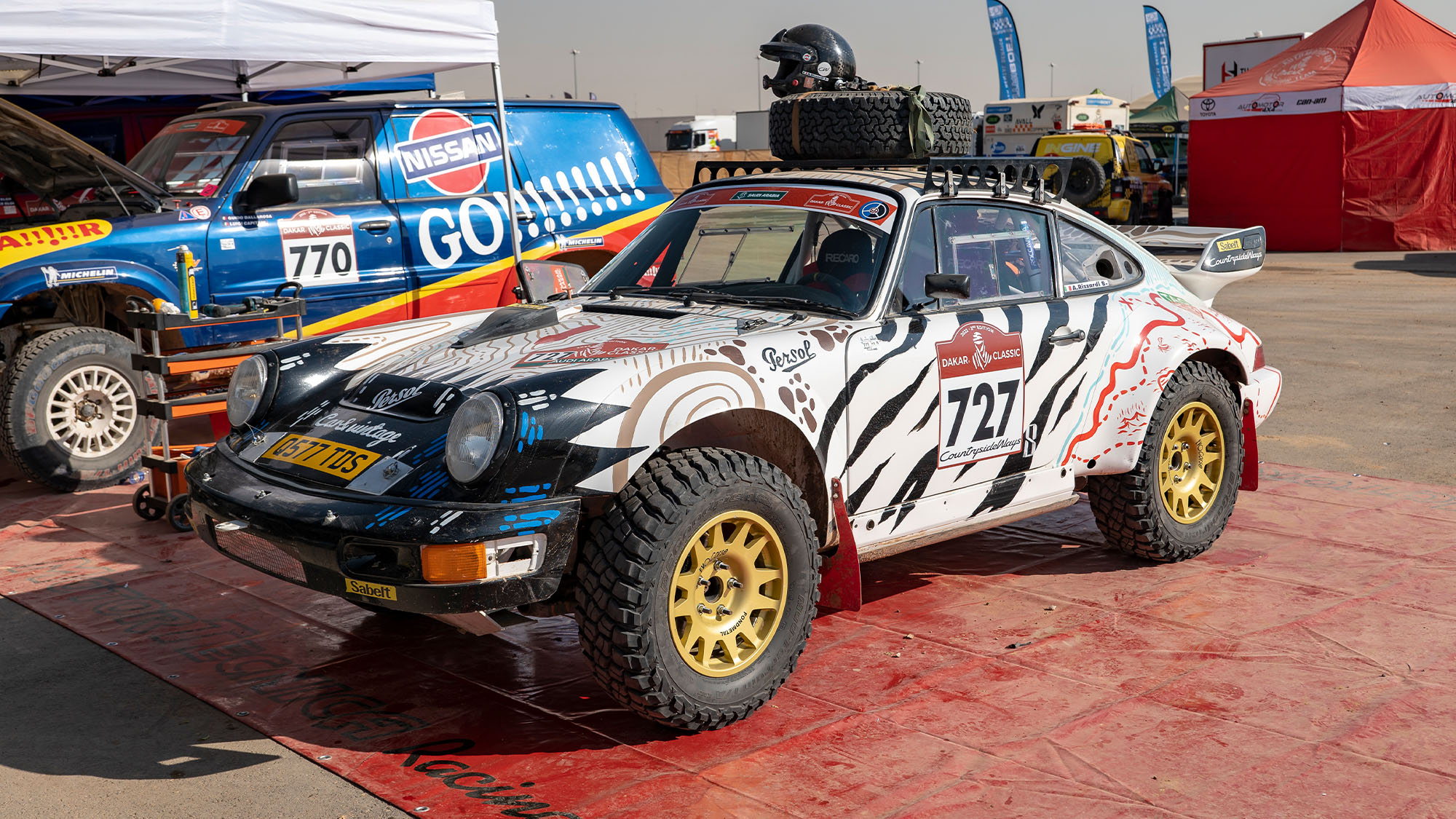 Take Italian winemaker Agustino Rizzardi, who is piloting an ex-Jimmy McRae 911 Carrera 4 from 1990 at his first Dakar Classic.

“I’m not a professional driver but I’ve been rallying for 20 years – it’s my passion,” the Italian says, in between giving mini tours of his gleaming Porsche to excited onlookers.

“10 years ago I decided to do rally raids because it’s a longer rally where you drive a lot – instead of having a 200-kilometre rally, here we drive for 1000s. This is my vacation!”

As with the Lada, the 911 had to be beefed up slightly to take on the dunes, desert and potential dromedaries. 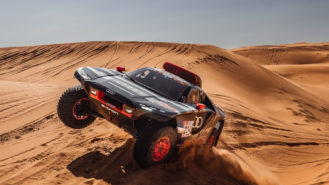 Electrifying the desert: Taking on Dakar in the biggest, most advanced Audi ever

Audi has revolutionised WRC and WEC, now its new target is Dakar – Motor Sport got up close to its electric challenger, the RS Q e-tron

“We installed bigger suspension, a bigger tank and an engine filtration system,” he says.

Rizzardi has previously taken part in the main event in a truck in 2015, but as opposed to the adrenalin rush of beating the clock, he also appreciates the challenge of getting vintage machinery over the line.

“The modern Dakar is another game,” he says. “It’s more about passion, being comfortable in the car taking it comfortably, having pleasure to the end.

“Kilometre-wise it’s almost the same. But the way you approach the tracks, the special stages are completely different.

“We take it easy – although we have to wake up at 4 in the morning!”

Whilst some drivers aren’t in it to win it, others are used to visiting the podium – it’s even in their blood.

Senegal-born Marc Douton won the first classic last year in a 179 Sunhill buggy, and now is taking on the event in a 1985 911 Safari Type G.

“I was at the Dakar arrival for four years from 1980 – it was my dream to compete in it,” he says. “I had the opportunity to do it when I was a biker competing in rally raids, but couldn’t because of my job. I had to forget the dream until the Classic showed up.

“Obviously the level is not the same [as the modern Dakar], but the pleasure is.” 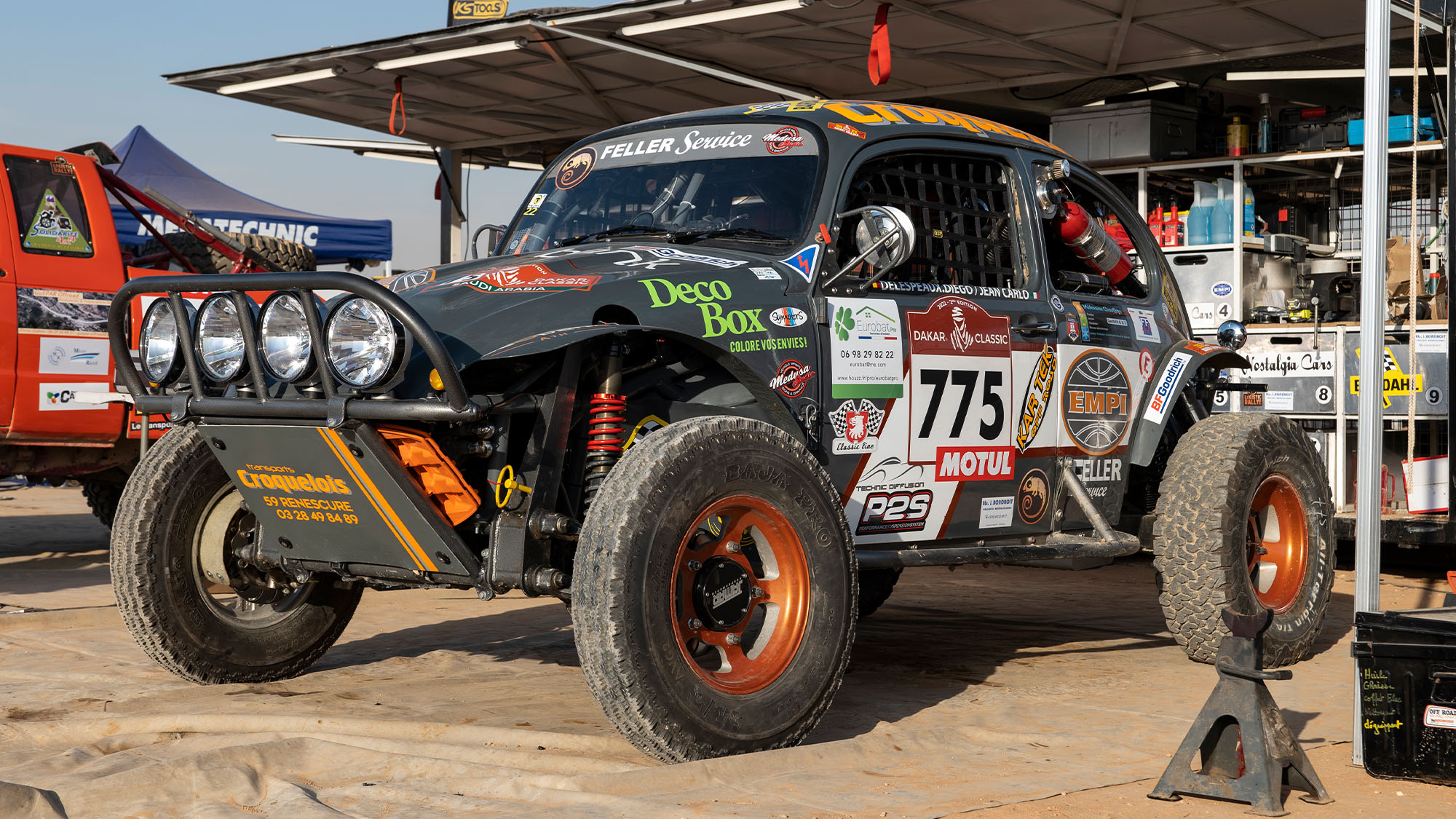 As well as the beautiful, the bivouac also plays host to the bizarre. Diego Delespaux’s ‘Mad Maxxed’ ’67 VW Beetle is one such example.

The Belgian mechanic completely reimagined the vintage car to get it ready for the Classic, and the results are spectacular.

As his co-driver Betrand Droupsy explains, pure passion for rallying pushes the competitors to the limit and beyond, not just on the special stages but also in preparing the cars.

“Diego began to build the car in June this year – a lot of people didn’t believe our car would be ready for the first test in September, but we made it!” he says.

Droupsy comments that just being part of the event is special.

“Everyone asks after everyone,” he says. “It’s not about competition – it’s a great spirit.”