There’s a palpable sense of adventure, of taking a step into the unknown, for the band of motor sport brothers and sisters who have travelled to Saudi Arabia this week for the opening round of Extreme E, the new electric SUV off-road series that has been making waves for the past year or more, long before a competitive wheel has turned.

There’s definitely a buzz about this one, especially given who is involved. Lewis Hamilton and Nico Rosberg immediately boosted the series’ credibility when they signed up as team owners, renewing their old Mercedes Formula 1 rivalry in a new and different way. Then fellow world champion Jenson Button followed them by plunging in too – although he’s taken his commitment a step further by choosing to drive himself. He’ll join the likes of rally kings Carlos Sainz Sr and Sébastien Loeb, rallycross and DTM star Mattias Ekström, ace all-rounder Stéphane Sarrazin – and that’s just some of the men.

One of the key selling points of this brainwave – brought to you by Alejandro Agag, the ex-politician and businessman who also founded Formula E – is this is motor sport with a strong social, moral and ethical conscience. Gender equality is one central pillar: each of the nine cars, fielded by teams that include big hitters such as Chip Ganassi Racing and United Autosports, will be shared by one male driver and one female.

Among the women is W Series champion Jamie Chadwick, who will share Veloce Racing’s entry with Sarrazin. She, like everyone involved, is excited by the prospect – but admits she doesn’t quite know what she’s let herself in for, especially coming from a hard-top circuit racing background. Judging by development driver Timo Scheider’s whooping reaction when he tested the Odyssey 21 SUV last Sunday on the desert course in Saudi’s Al-’Ula region, the answer is probably an awful lot of fun. The buggy, made by French constructor Spark that also builds the Formula E cars, is a 1650kg 550bhp “beast” capable of 0-62mph in 4.5sec, at gradients of up to 130%. The races are short because so is the range – and that’s because the emphasis here is on explosive performance over endurance. Extreme E is all about the wow factor, to highlight how EVs can be a lot more than simply ‘worthy’.

“It doesn’t compare to anything else I’ve raced in,” says Chadwick, although one leveller is none of the race drivers have much experience of the Odyssey 21 so far. “We had the shakedown test, which we did at 50% power and was limited to 100km a day, which split between two drivers really isn’t a huge amount. Then we had the official test which was two days in Spain and was not as much running as I would have liked either.”

So what’s the car like to drive? “Unbelievable,” she says with a grin. “It was really surprising when I first drove it, even at 50% power. It’s a beast. Not only is it fun to drive on its own in isolation, racing wheel to wheel with everyone else will also be pretty cool.”

Rallycross-style qualifying heats, semi-finals and an ‘X Prix’ final is the format, run over two days this weekend, on a ‘route’ rather than a circuit mapped out through a stunning desert landscape. The range limitation means each driver gets just one lap of the roughly five-mile route, before handing over to their team-mate. This writer is among the band of travellers in Saudi, but quarantine rules mean we’ve only just left our Jeddah hotel at this stage. A clip of video showing the course with a backdrop of red sand and rocks inspired thoughts of pod racing scenes in Star Wars – an analogy Extreme E itself has suggested. To be fair, it does seem to be accurate.

“It’s definitely a baptism of fire, like nothing I’ve done before,” says Chadwick. “But that’s part of the challenge and why I’m looking forward to it. It’s something I’m really relishing.”

But she’ll be at a disadvantage given that all her experience comes from racing on the black stuff, won’t she? “I really don’t think it’s a problem,” she says. “I had doubts, but after the first tests I was pleasantly surprised how quickly I would be able to get up to speed. That combined with the amount of training I’ve had from Veloce in the last few months means it’s a championship anyone from any avenue can come into.”

Parallel to the gender equality pillar is the environmental one. At first glance, racing at five remote venues around the world – desert in Saudi, rain forest in Brazil, glacier in Argentina, arctic in Greenland and what they call ‘Ocean’ in Senegal – sounds like possibly the most destructive form of sport ever created. But look closer. The venues have been chosen as areas of the world that have already been damaged by climate change and at the heart of Extreme E is a mission to not only spread the word, but also leave a genuine legacy of change in each region. The team of scientists travelling to each round are being pitched as just as central to this adventure as the drivers and teams who are competing in the races.

“We chose to organise our first ever race in Al-’Ula, with the aim to shed light on the threats presented by desertification,” says Agag. “The magnificent sand dunes and breathtaking views of Al-’Ula will represent the perfect backdrop to showcase the exploits of the innovative engineering masterpieces and the world class driving capabilities taking part in the competition.” 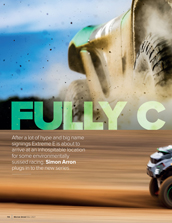 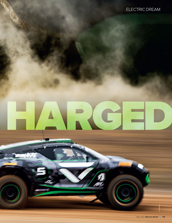 Hamilton. Sainz. Andretti. Loeb. Rosberg. Ganassi. Button. Even before a wheel had turned in anger, Extreme E was already infused with a sumptuous motor sport pedigree. And while the notion of…

The environmental pitch in Saudi is that desertification is an increasing problem that causes around 12 million hectares of productive land to become barren every year. Projections suggest the average availability of water in some regions will decrease by 10-30% in the next few decades, affecting the lives of 2.4 billion people. Heavy stuff. So how can racing electric SUVs on a patch of desert for a weekend change anything? The point Agag likes to make is that any action is better than doing nothing at all. There’s a genuine desire to do some good in this regard. Yes, without the ‘green’ angle, he could never justify his sport – but it genuinely seems he wouldn’t be bothering to do it at all if there wasn’t a greater-good ambition to motivate what is a massive logistical (and vastly expensive) exercise. And yes, how it’s all financed is a legitimate question too.

Here’s another one. Why couldn’t Extreme E have chosen an area of the Sahara or any other desert in the world, rather than a venue in a kingdom that’s not only the world’s largest producer of oil, but continues to carry a global reputation overshadowed by its questionable record on human rights – specifically against women? ‘Sports-washing’: that’s the phrase Amnesty International likes to use for Saudi’s investment in welcoming international elite sport to its culture. A new report published by human rights organisation Grant Liberty says Saudi has spent $1.5 billion on international sporting events to bolster its international reputation, including the deal to bring F1 to Jeddah this coming December.

[By the way, the Covid test station we headed to on Monday morning was on the site of the new F1 circuit. Let’s just say this coastal ‘resort’ might need a lick of paint or two before F1 arrives. Rundown British seaside towns have nothing on what we saw.]

What is Extreme E? Guide, preview and updates

Extreme E is the latest green racing series – read our guide to find out what it is, who's in it, where it is, when it is and how you can watch it

Anyway… Agag and all involved with Extreme E won’t be able to dodge the uncomfortable questions, and to be fair to the Spanish entrepreneur he probably won’t try to. He’s faced plenty of criticism on Formula E over the years and always remains defiant. We’re keeping an open mind heading into the weekend.

What can’t be doubted is the power Extreme E is likely to wield in years to come. The car manufacturers will flock to this series, especially as it’s based on blessed SUVs and they have scope in the future to shape the bodies to mimic those of their own road cars. Hummer and Cupra are already signed up as partners and just this week Lotus launched a technical collaboration with Button’s JBXE Racing team. Make no mistake, this series will be huge.

And it’s hard to miss, too. In the UK alone, you can catch the action this weekend live on ITV, online via the BBC, and on Sky Sports and BT Sport. They all want a piece of this action.

And so the adventure begins. Let’s dive in.