The Ford RS200 could have been the WRC’s next big thing, but after lives were cut short, it all came to an end 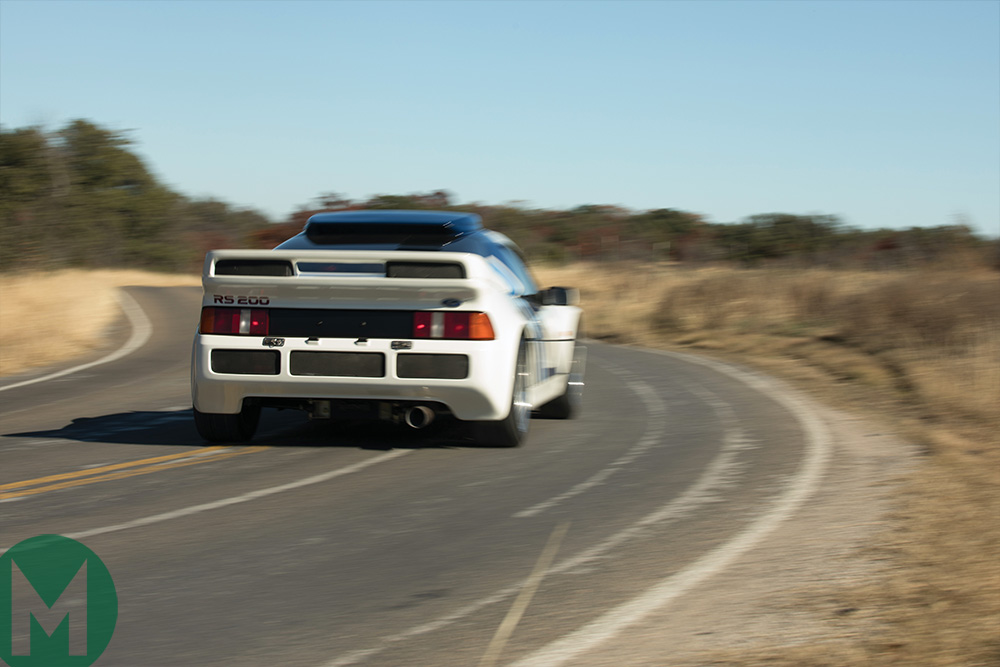 Fear, power, speed and ingenuity: Group B was the most evocative era of rallying. And this Ford RS200 Evolution, one of 24, represents the zenith of Group B rally. Now, it’s on offer with an upper estimate $700,000 at RM Sotheby’s Arizona Sale on January 17, 2019.

Before it came the Escorts, but Ford wanted to be a major player against the Lancias, Peugeots and Audis that dominated in the 1980s with a four-wheel-drive monster. Just as Formula 1 is the ultimate version of a single-seater, this is the ultimate rally car.

Tony Southgate, designer and engineer at BRM, Lola and the All American Racers, was contracted to develop Ford’s C100 Mk3 Le Mans prototype. But that car never raced. So he moved onto the Group B project, competing with other designers to submit proposals with a two-week deadline.

He got the job, taking cues from circuit racing cars, with an aluminium monocoque and mid-mounted engine and gearbox. The RS200 Evo also took a lot from the Sierra – 118 parts, to be precise – mostly small components, but the windscreen, doors and tail-lights were also from the parts bin.

It featured a Cosworth ‘BDT’ power unit that produced 600bhp, with larger brakes and better suspension. The result was a 0-60mph time of just over 3sec, which was a long-standing world record.

Two hundred needed to be built, but only 20 were converted to ‘Evolution’ specification, with four more following suit later. So this 1986 version is extremely rare.

The RS200 Evo was to set Group B alight. But things didn’t turn out that way.

During the 1986 Portuguese Rally, Joaquim Santos lost control and hit the crowd on the inside of a corner, killing three. Works teams including Ford withdrew from the rally, and in the April 1986 issue of Motor Sport, Gerry Phillips summed up the situation frankly.

“So crowded was that stage, and so unconcerned were the organisers that the road itself was crammed with a solid mass of excited, uncontrolled, almost hysterical humanity until seconds before a car arrived, that the responsibility must be theirs alone.

“Spectators crowd the roads completely and part only to form a narrow avenue for oncoming cars when they are just yards away, and even then they stay close enough to reach out to touch them as they pass, drawing applause from their fellows if they succeed; amateur photographers squat in the middle of the road, determined to get the business end of a rally car as large as possible in their frames before jumping clear; where a wall borders the outside of a bend, it will be completely hidden from a driver’s view by a solid row of people sitting or leaning on it, and it is a point of honour not to get scared and move away: escape roads are blocked, and crews find it impossible to use pace notes because landmarks, junctions and verges are all invisible.”

Henri Toivonen’s death in Corsica was the last straw for the FIA, and it pulled the plug on Group B, bringing in safer and more diluted Group A cars for 1987.

The Ford RS200 Evolution’s short World Rally Championship cameo was over. But that was just as well for its motor sport boss, Stuart Turner, as it found a more fitting home on Pikes Peak and on rallycross circuits.

“For me the most memorable thing about the RS200 was not necessarily the rally side. We’d been used to so much success with Escorts that finishing WRC events third, fourth or fifth never really captured our imaginations.

“It was more what happened after the ban, when Martin Schanche and others used the RS200 to such good effect in rallycross. I think that proved the package was all right, but rallying had still become too fast. You can’t just line special stages with Armco.”

A successor to the RS200 with a bigger engine was scrapped, and a number of road-going Evos were destroyed in a factory fire. Rally’s era of excess was over, as was the car that could have taken its crown.

Squat on its low-profile tyres, round enthusiastic headlights raring to go, it stokes a number of questions. Mainly, ‘what could have been?’