At 47, Sébastien Loeb is a full 12 years younger than his Extreme E rival Carlos Sainz Sr. But age is apparently an irrelevance for these legends, and nine-time World Rally Champion Loeb is still relishing a busy motor sport life, juggling his drive for Lewis Hamilton’s X44 Extreme E squad with another Dakar Rally campaign for Prodrive, which runs both programmes. What he isn’t committed to is another WRC comeback – at least not yet.

“The media went too far with this WRC story” Sébastien Loeb

Speculation is rife that the 79-time World Rally winner is set to return for a limited programme with Malcolm Wilson’s M-Sport Ford team in 2022 for his first WRC start since he competed for Hyundai at Rally Turkey last year. In an exclusive interview with Motor Sport, Loeb admits he’s spoken to Wilson but makes it clear he’s a little ruffled by the stories – without ruling out the possibility it could happen.

“I imagine you saw a lot of articles in the last days,” he says when we ask him if a WRC return is on the cards. “I don’t know where they are coming out from. For sure it is true I spoke with Malcolm [recently] about the possibility eventually to come for one, two or three events, but that is it. At the moment it was just a discussion like that and my priority is to concentrate on what I am doing: Extreme E and preparation for the Dakar. Nothing is done and I don’t know myself whether I will do WRC in the future or not. The media went too far with this story.” 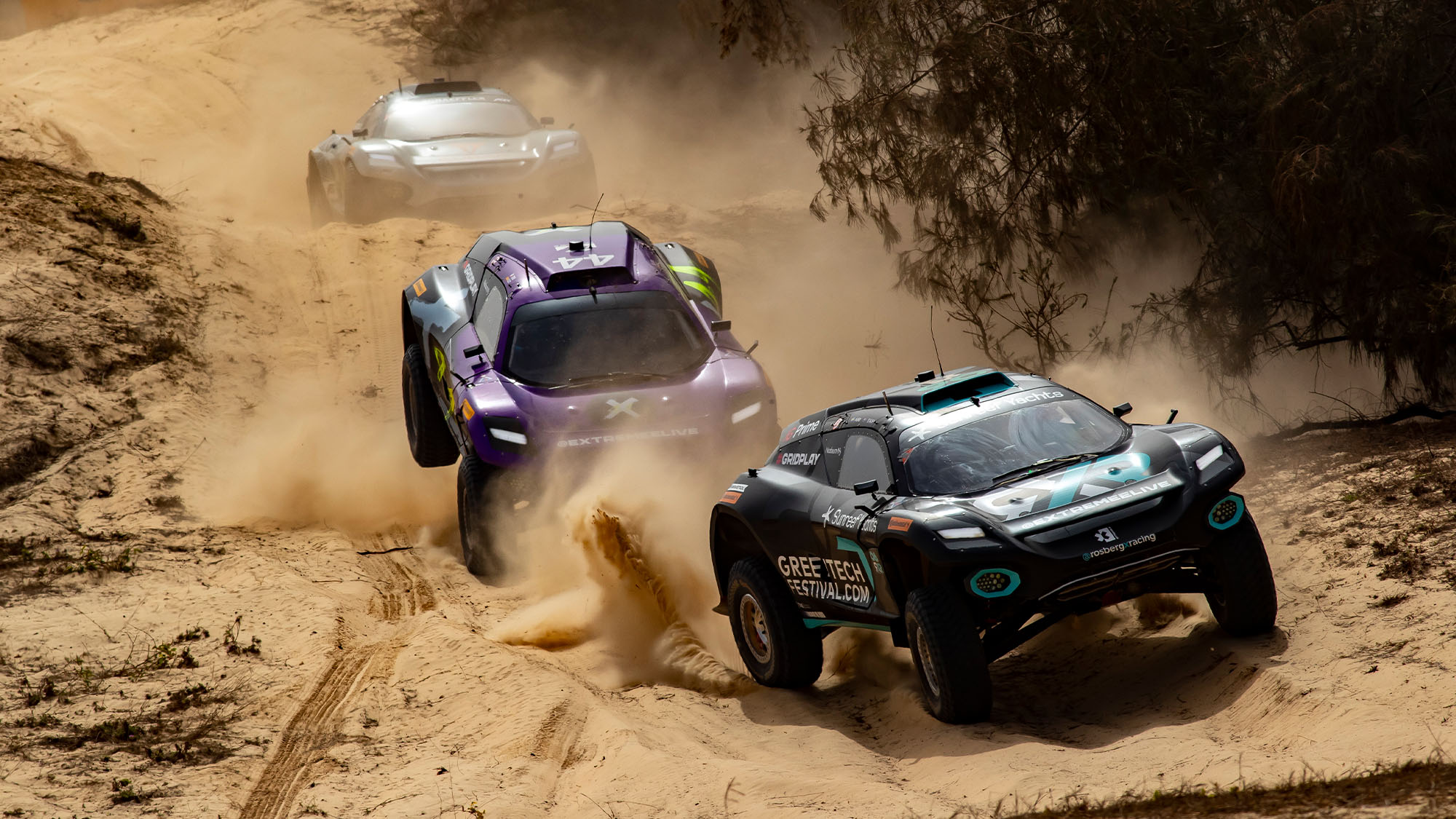 Loeb is hoping for closer Extreme E racing in Greenland

Still, the new hybrid Rally1 rules set to be introduced next year certainly have Loeb’s attention. “It’s for sure a good move for the performance of the car,” he says. “With the 100kW hybrid on top of the WRC engine it will be powerful and very fun to drive. Also [it will require] a bit more strategy because you will maybe have to manage a bit where you want to use it, because you will not have it full time. It can be something interesting.”

More prominent in his mind is the third Extreme E event, the Arctic X Prix which takes place this coming weekend in Greenland. He and team-mate Cristina Gutíerrez lie second in the points to the unbeaten Rosberg X Racing duo Johan Kristoffersson and Molly Taylor, having scored a podium third in the Saudi Arabian season opener, then retired from the final in Senegal when the teams’ two female drivers made contact. That only heightens the growing rivalry between the two teams, which is bound to be in focus in Greenland given the Nico Rosberg vs Lewis Hamilton subtext.

“They [RXR] have won the two races, but we have won the two qualifying [sessions] – and qualifying is more representative of the speed of the crew,” points out Loeb. “In the semi-final and final you might not have as good a start as the other one and they get ahead, then it’s complicated to overtake. In Senegal we had very good speed, much better than the others. But we had bad luck in the final with a little contact that broke our car. It would have been better had it broken their car! I think we are in good shape, we have scored some good points. OK, it is not the same as the victory, but we are motivated for the next one.”

Rosberg has been a relaxed and engaging presence at the Extreme E rounds run so far, but it’s hardly a surprise Hamilton has yet to make it to a race: something to do with a busy Formula 1 schedule – Greenland obviously clashes with the Belgian Grand Prix – and trying to beat Max Verstappen for his eighth world title. But Loeb says his team boss is taking an active interest in X44. “Yes, we have some conversations with Lewis, he is interested in the team, he is really concerned about ecology and so it is important to him to have this team,” he tells us. “He is happy that I am driving for him and I am happy to drive for him also. It’s a good relationship. He doesn’t have time to come to the races, maybe he will come one day, I don’t know. But when you see the planning of the F1 [schedule] it’s complicated for him. I would not like to do 20 events in a year! But we always speak before and after the races.” 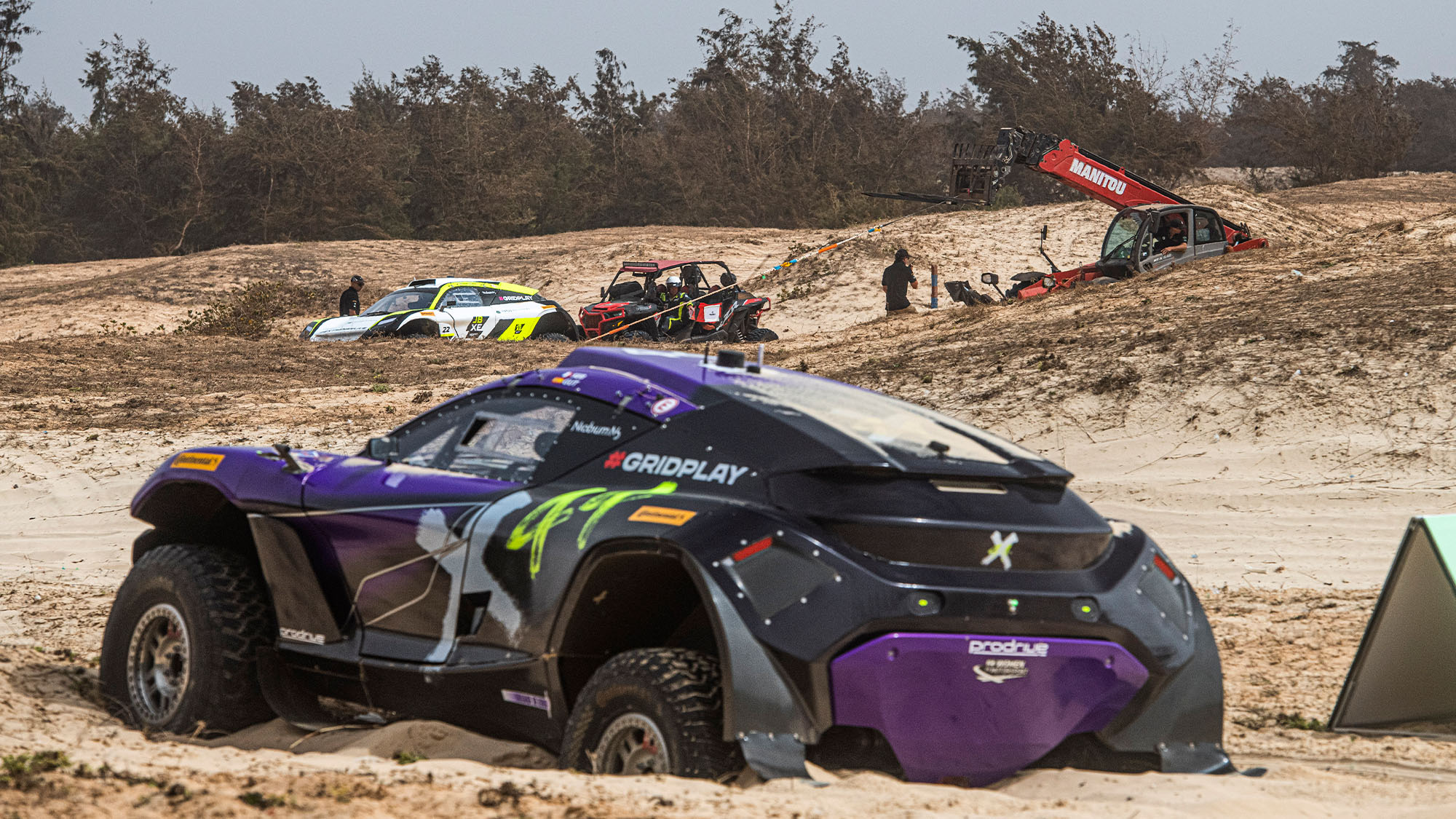 During his illustrious 20-plus years in motor sport, Loeb has never exactly come across as the touchy-feely type. Is he really motivated by a desire to tackle climate change, like Hamilton? “What I enjoy for the first time in my career [is] I do motor sport, my passion, in a way that we have a positive impact instead of a negative one,” he says. “Even if the negative impact is not huge [in motor sport], we are still driving petrol cars. Here, we drive electric cars that don’t create pollution and on the side of that it also tries to have a positive impact in different ways: [highlighting] the turtles on the beaches in Saudi, the mangroves in Senegal and the education in Greenland. It’s a good way to try to help motor sport to continue to live.”

From a driving perspective, Loeb says he is enjoying life in the pioneering all-electric off-road series, is gelling well with Gutíerrez and relishes discovering new places around the world. “We have a very high level of driving because we have a lot of very fast drivers,” he says. “To drive this car you need to have the experience of rallying or rallycross and you can see we have a few world champions from different disciplines, and that makes it exciting. You really need to push on the limit to beat the other guys because it is a sprint race.”

Teething troubles with the all-new, bespoke Spark-built Odyssey 21 have been relatively minor, but like his rivals Loeb circles the suspension as the priority for development. “We have to improve the suspension because it’s a bit tricky to drive the car with it, but on the engine side and the power management it’s really working well,” he says, before expanding on the specifics of the niggle. “It’s very regulated, we cannot change or improve our own suspension,” he says. “What we have is all the same for all the cars and it’s not good enough. It’s under-damped, so the car is lifting all the time and jumping around. I don’t think it is very complicated but I think it needs to be done.”

As is the way in Extreme E, Loeb and his rivals have little idea what to expect from the course they will face in Greenland – “I know nothing” he says – but cautiously welcomes a move to increase the number of cars competing in the final. Poor visibility created by dust meant only three raced against each other in Saudi, four took the start in Senegal and this time the plan is to up the number to five. “It can work if we don’t have the dust problem we had in Saudi,” says Loeb. “In Senegal it was much better and we saw a much more interesting semi-final and final because the car could keep contact with the car ahead. Even if it was still difficult to overtake we could see a fight, whereas in Saudi after the first corner there was 15sec between the cars because we couldn’t see anything. More cars in the final can work if we don’t get this problem of dust. If we do maybe we should look to another solution, like a joker lap like we have in rallycross.”

Once the inaugural Extreme E season wraps up, Loeb’s full attention will turn to the Dakar Rally in January with a revised Prodrive-built BRX Hunter T1+ with hopes of better fortune compared to last time: he retired on the eighth stage when not one but two punctures left him and co-driver Daniel Elena stranded on a stage for five hours.

In the wake of the 2021 event, he and long-time friend Elena split, so this time he’ll have a new co-driver, Fabian Lurquin, alongside him. The new pairing became more acquainted on the recent Baja Espana Aragón, where Loeb sensationally led into the final stage driving the original version of the BRX – only to hit a series of troubles that cost him a first Cross Country win. He and Lurpuin had fallen to seventh by the finish. 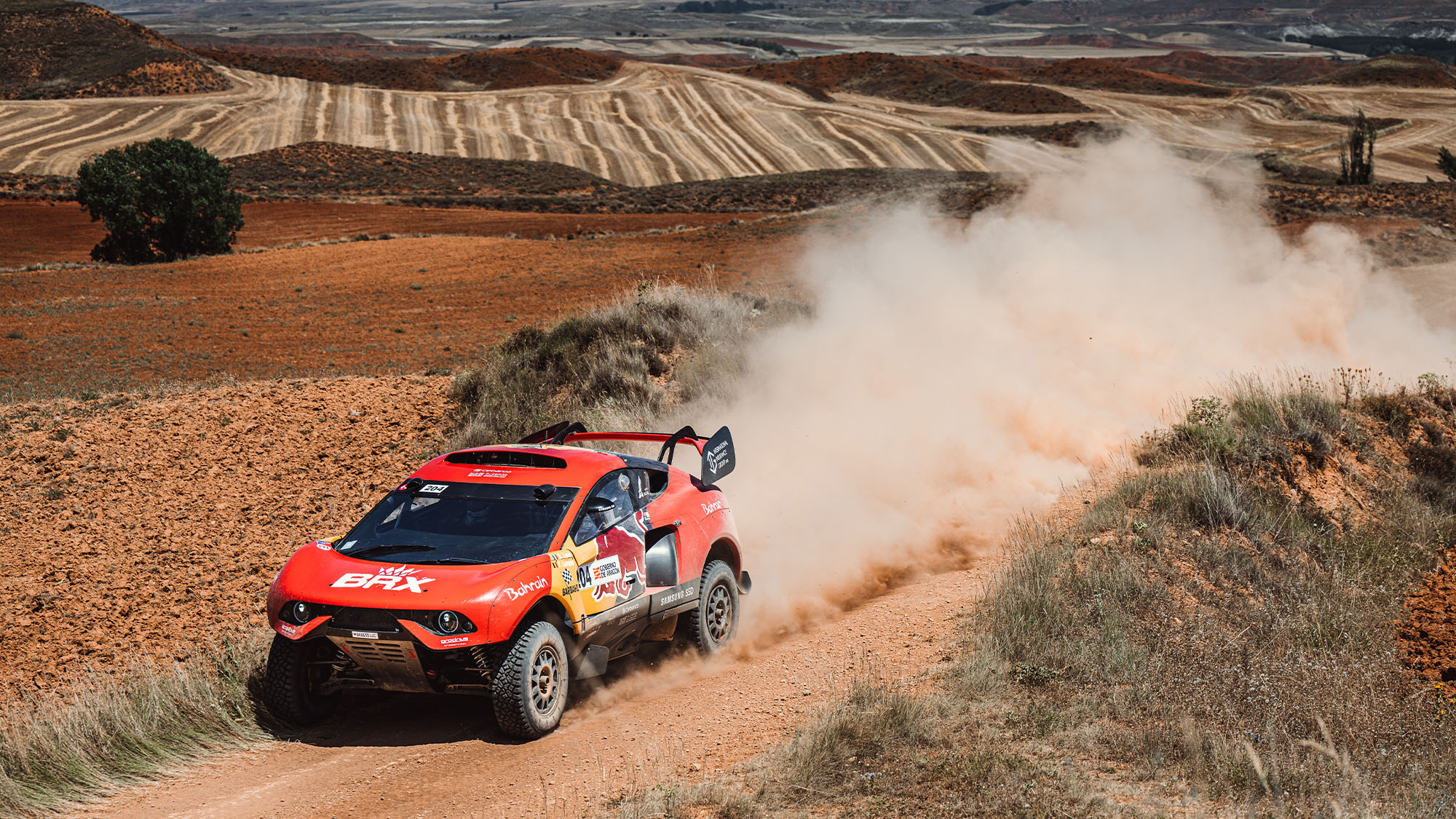 “I had fun because the roads are a bit like WRC, and it was interesting to drive this car on these type of roads,” he says. “It was our first experience with my new co-driver, so it was interesting to discover how we can collaborate in the car. The car was working well and it was important to see that we were able to fight with the best drivers. Then we had bad luck: 150km into the last stage we were 2min 45sec ahead and just had to cruise to the end – and then the trouble started. The first alarm was an overheating engine so we checked if we had something in the air intake, but there was nothing, which was a bit strange. Then 2km later we lost the power steering. I don’t know if the problems were linked but without power steering for 40km in a twisty stage it was really undriveable.

“I still tried to keep the rhythm in the fast sections, but I lost control. At one point when I hit the brakes the steering turned and we went into some stones and we had a puncture. Because we had no hydraulics for the power steering we had no electronics for the jacks, so we had to use the spare which is complicated to access, and we had to use some stones to raise the car high enough to change the wheel. Everything went wrong. Until that point, 40km from the end of the Baja, I enjoyed it and it was exciting.”

The great man seems upbeat, is clearly enjoying his sport as much as ever and with that in mind, you wouldn’t bet against that WRC return – even if Loeb makes it clear a deal is yet to be done. Best keep your fingers crossed.