“Hellish” is the word that Nicky Grist uses, and with some justification.

Elfyn Evans only needed a handful of points to claim this year’s WRC title but knew that that one mistake would open the door to the charging Sebastien Ogier and end his hopes of a first championship.

Amid rain, slush and snow on the mountainous roads around Monza, there was plenty of opportunity to slip up. On the mountainous Gerosa stage, Evans lost the rear of Toyota Yaris and skidded off the tarmac.

It was a sight that brought back memories for Grist, a World Rally champion co-driver who experienced a similar heart-breaking loss with Colin McRae.

“It was like Rally GB in 2001,” he says. “All we basically had to do was just keep Richard Burns behind us to win the World Championship – at our home rally in Wales.

“Unfortunately, on the first proper day, in the forest on the third stage, we rolled out of the event and destroyed the car. I’m sure that’s a very similar feeling to what Elfyn has right now. Anybody would be [very upset].”

Evans’ dismay was palpable: “ I’m feeling massively disappointed,” the Toyota driver said. “It’s [a case of] what could have been…”

In some contrast to McRae’s swashbuckling style, the Welshman had been doing his best to run a cautious rally up to that point. However, upon hitting a patch of treacherous ice on a tightening right-hander, the Welshman was powerless to stop his Yaris sliding down the bank and into the forest.

“When I braked, it was just like glass and there was no chance of us slowing down at all,” said Evans. “It completely caught me by surprise. I actually had the surface change in my notes, but I didn’t anticipate it would be as extreme.”

Ogier, who would go on to win his 7th WRC title, himself commented on the stage: “It was incredible, the corner he [Evans] went off there’s nothing you can do – I nearly went off. It’s not really fighting, it’s surviving.”

It reminded Grist of sage knowledge from one his own champion driving partners. 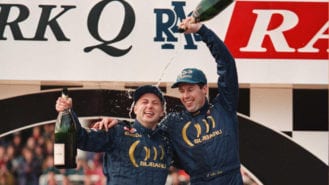 “Juha Kankkunen said to me, ‘Yes, you’ve got to be fast, and you’ve got to win rallies to win World Championships. But, the one thing you need more than anything else is a bloody good dose of good luck.”

A veteran of 131 WRC events, Grist is in no doubt of the formidable challenge Monza would have represented, particularly as a title decider.

“When you look at the weather conditions that were thrown at him, you normally only ever see these on the first round of the championship in Monte Carlo, where a bad result didn’t probably really matter,” Grist says.

“But the pressure he was under must’ve been pretty extreme. When he’s out to win his first World Championship, and he’s thrust into a position of trying to choose tyres for three batches of three stages, when you’ve got wet tarmac, slush and snow – it’s a hellish situation to be in.

“I think if the conditions had been dry and cold, I think the outcome would have been a lot of difference in that Elfyn most definitely would have been right in there at the end of the rally.’

“When his team-mates faltered, Evans drove a sensible rally and won. He reminds me of Kankkunen.”

In spite of this bitter disappointment, Grist still sees a very bright rallying future for Evans.

“I’m sure his confidence is going to be on a real high no matter what happens in Monza, because he is shown he’s good enough,” he says. “I think that the way that he drives, the way he performs, he’s got many more chances of winning a championship in the years to come.

The very fact that Evans was leading the title fight was due to his almost cast-iron consistency, and Grist believes this to be his greatest quality.

“He’s won rallies and shown just how reliable he is,” he says. “When he’s in a position to win, he takes advantage. Elfyn just seems to always be at the finish. So that makes him a very clever driver, as well as very fast. I think that probably if we’d had 14 rounds of the World Championship this year, he would have been in a very similar position.

“The fact is, he’s got the speed to take on the best in the world. But I think when the going gets tough, he seems to be able to control his speed. He basically makes sure he gets the car through.

“I think that was quite evident with his performance in Turkey this year, where the conditions really were quite tough. When his teammates faltered and fell by the wayside, he just drove a sensible rally and picked up the victory. He reminds me of Kankkunen.”

The former co-driver also feels experience will tell in the coming seasons for Evans.

“He perhaps put himself under too much pressure. In the years to come, that pressure is going to disappear really,” Grist notes, “From a Sebastian Ogier point of view, you could imagine his mindset would have been a far more calm and relaxed demeanour in comparison to Elfyn, because he’s already got six World Championships under his belt.

“Winning a seventh, would it have made a difference? Well, it would have made a small difference to him. But did he really need it? No, he didn’t at all.

“I think the one thing you take from this is the fact of being able to handle these pressure situations, when it comes down to the last few events of the year and winning a championship is going to be a real possibility.”

With Evans remaining at Toyota next season, Grist believes him to be best placed for another title tilt.

“Elfyn’s going to be a challenger in the years to come. I think a lot depends on what team and what car you have, but Toyota have shown they’re a leading light.

“I can see it being another Ogier and Evans battle again in 2021. He’s definitely going to be right in there fighting for the championship, without a doubt.”