Sébastien Ogier delivered a resounding performance on the final day of the Monte Carlo rally to win the event for a record eighth time and claim maximum points for finishing first on the final Power Stage.

Despite brake problems on the first day and a puncture on the second, which cost him 35 seconds, he went into Sunday with a 13sec lead over team-mate Elfyn Evans and enough confidence that he could afford to take “no risks” on the early icy stages.

Although Evans thought he could have pushed harder, the final 32.6sec gap to Ogier underlined the Frenchman’s superiority.

“This is a perfect start to the season,” said Ogier. “Watching this rally as a kid gave me the dream to become a driver one day. If I could have only one record, for sure I would take this one. It has a lot of meaning for me, and this is also the reason I was quite emotional on the podium.”

Thierry Neuville rounded out the podium for Hyundai with new co-driver Martijn Wydaeghe, who will remain in the passenger seat for Arctic Rally Finland.

Neuville’s progress to third was helped by an unfortunate puncture for Kalle Rovanperä which cost the impressive 20-year-old almost a minute on the first stage of Sunday, leaving him in fourth. There was one final chance for him to display his promise in the Power Stage, though, where he finished second, 3.2sec off Ogier.

Dani Sordo was the next-best Hyundai in fifth, securing some points for the team following Ott Tänak’s retirement on Saturday. Takamoto Katsuta declared himself happy with sixth after coming into the rally with “zero confidence”.

“The Yaris WRC has been fantastic this weekend,” said Ogier. “I had such a good feeling in the car. I think it was a good decision to do one more year. The team is great, so a huge thanks to all of them.

“The first stage this morning was incredible: There were so many grip changes and it was impossible to read because it was like black ice. The gravel crew went through the stage two hours earlier and there was nothing there at the time, just a little bit of frost. So it was really surprising. It is never the easiest to manage a lead and especially on this rally, but we did it.”

Throughout the rally, Evans regularly pondered whether he could have taken more risk and gone faster, and it was no different at the end, although he felt positive about the pace of his car.

“It was a tough final day with very challenging conditions, as it has been throughout the weekend really,” said Evans. “Maybe I didn’t push quite enough to really challenge Seb for the victory, he was very very good this weekend. It’s his home rally so it was always going to be tough – but credit to him.

“As a team it’s a fantastic start to the year. We can be happy with the points, but of course you always want more and hopefully next time I can be a bit stronger. I don’t think I quite had the feeling this weekend.

“Perhaps at the start of the year it was better not to risk everything to try to win, but we know if we want to challenge for the title we’ll have to do that during the year. However, I feel we’ve got a really strong car and a very strong team to go with it.”

Without any further service before the finish, the cars left Puget with the tyres they would have to complete the rally on, and headed straight into conditions that moire than merited the description of treacherous.

“I have never driven a stage as tricky as this one – it was amazing,” said Sordo. “How slippery is it? Some places, it’s another level!” 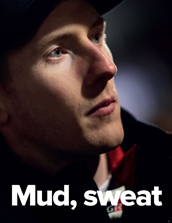 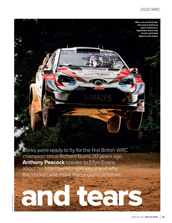 Elfyn Evans has his feet firmly on the ground – but most people who come from Dinas Mawddwy do. It’s a quiet and unpretentious village, home to around 600 people,…

Greensmith ran wide on the very first corner but made it to the end. “God, was that slippy!” He said. “I’ve not driven a stage like that in my life. I don’t know what to say!”

Caution was the order of the stage, as drivers were wary of jeopardising their overall positions by taking risks on the unpredictably slippery surface.

Ogier may have found it tricky, but finished first, only 0.7sec ahead of Neuville who insisted that he had been taking it easy. As it turned out, he could have taken it even easier, as third-placed Rovanperä suffered a puncture and dropped 53.3sec, losing his podium place to the Belgian, with little hope of recovery — almost a minute back.

The pace on parts of this stage was comically slow, as drivers tiptoed over snow-covered roads. Greensmith once more offered an early illustration of the risks, as he spun and lost time turning the car around.

Neuville went one better; the cool-headed Belgian finishing fastest, 4.5sec ahead of Evans despite professing caution once more. “I tried to avoid all the cuts in this one – we don’t want to get a puncture.”

Ogier followed his team-mate closely, finishing only 1.3sec behind Evans after what he called a “very careful” run with “no risks”.

Barring any mishaps, it was clear that the top three looked set, as Rovanperä took an ultra-cautious approach, sitting comfortably in fourth, 30sec clear of Sordo and without any apparent hope of moving up the rankings.

“After the puncture there is nothing really we can do,” he said. “The gap is too big. I am not pushing anymore and I’m just focused on keeping my position.”

With less ice on the road than earlier, drivers were visibly more confident on the re-run of the stage that had started the day.

Sordo completed his run in 8min 45.3sec — 20sec faster than his first attempt — but was beaten to the stage win by the home hero.

Ogier was understandably happy with his “clean run” that put him 2.7sec ahead of Sordo, with Neuville 1.9sec further back, ahead of Evans who looked secure in second.

Pierre-Louis Loubet capped off a miserable Monte by lodging himself in a snow bank for 2min on the Power Stage, arriving at the finish disgruntled due to his “stupid mistake”.

There was little cheer when Greensmith’s door swung open either. “I’d say it’s been the worst performance of my career to date,” said the First M Sport driver.

“I feel like with the preparation I’ve had, I should have delivered a much better performance. It’s happened now, I’m going to learn from it and improve on it for the next one.”

Rovanperä’s luck finally turned, however, as he ducked just under an 11min stage time, ahead of all but the man who dominated the event.

Winner of the Power Stage and the 2021 Monte Carlo Rally, Ogier and co-driver Julien Ingrassia, leapt onto the roof of their Yaris WRC to celebrate a successful start to their title defence.