Who stole the show at last weekend’s Arctic Rally Finland? The evergreen seven-time champion Sebastien Ogier? Ott Tänak who led from Stage 1 to the finish? Crowd-pleaser Thierry Neuville with his latest antics?

None of the above. The performance that truly lit up an iced-over WRC round was the sensational debut of 19-year-old Oliver Solberg, who battled with off-road heavyweights in a performance far beyond his years.

Finishing comfortably in the top 10, Solberg wasn’t just in touch with the big hitters – he pushed them all the way, and beat a few too. It was a drive that left onlookers simply astounded.

Where did this seemingly God-given, ‘none-more-driftier’ speed come from? Being the son of rally legend and WRC champion Petter Solberg helps. It looks like the younger ‘Sol’ has a strong rallying pedigree and then some.

“I got so emotional and into it – I was angry when I lost 0.8sec to Ogier”

Talking to Motor Sport about his stunning debut, Solberg described feeling like he was in a dreamlike state as he battled his heroes, and also shared his ambition to emulate his father’s achievements.

The young charge’s journey from junior jumper to senior slider began just a few weeks ago, making his performance ever the more remarkable.

Rewind to January’s Monte Carlo Rally, and Solberg was feeling rather nervous. The WRC2 prospect had just been called in to see Andrea Adamo, the sometimes fearsome boss of the Hyundai WRC team.

Adamo is not known for mincing his words and, as a result, Oliver feared he might be about to be hauled over the coals like a few drivers before him.

In fact, it was quite the opposite. His WRC dream was about to become true.

Solberg took the fight to Ogier across the whole event

“Andrea was so happy with my speed during Monte Carlo that he said to me, ‘Why not just throw you in the WRC car straight away and try it out in the Arctic [Rally Finand]?’ said Solberg.

Fast-forward a few weeks, and the young Swedish-Norwegian could barely believe his eyes as he drove towards SS1 on Arctic Rally Finland.

“When I was on the way to the first stage, I had Sébastien Ogier on one side of me and my team-mate Ott Tänak on the other — the proper guys! Quite crazy. 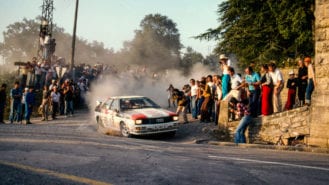 Come the start of Stage 1, Solberg had a vision of how things were going to go – it was all worked out.

“I was so hyped, you know? I had done the car settings, was ready to take the perfect launch, and then – nothing.

“There was a little bit more grip than I expected and the car just stalled. So I lost about six seconds – but it was ok.”

Solberg amended for his error on the following stage though, setting an astonishing fourth fastest time on his second-ever WRC trial. As he progressed through the stages, he then became locked in a battle with his idol Ogier.

“Oh, that was crazy!” he exclaims. “I got so emotional and into it – I was angry when I lost 0.8sec against him across 30km – which is not maybe the correct thing to do if you’re only 19 and you’re fighting against the seven-time world champion!

“But when you drive, you don’t really think about the fact that it’s Ogier.

“Then you come to the finish, and realize ‘S***! It’s the seven-time world champion!’ It’s special.

“I was close to the top, and so was quite surprised when I saw the names behind me!” 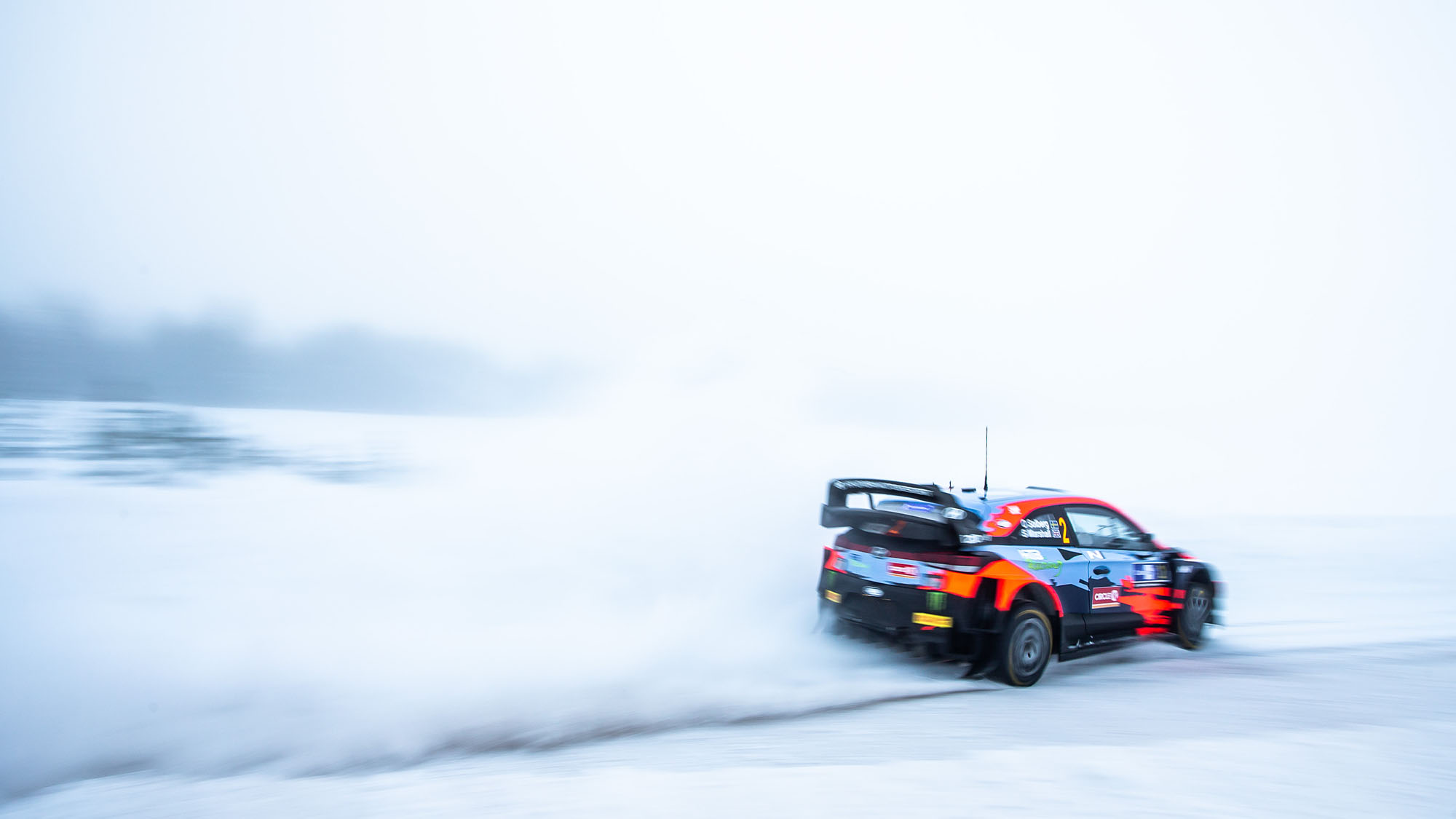 Solberg has begun his WRC odyssey

As soon Solberg was up and running, he says that he felt at home.

“The first stage, you’re a little bit tense, high shoulders,” he admits. “Then, you go for the second one, it’s much better, you’re more relaxed, you know how everything works and so on.

“From the second stage onwards, I felt quite confident.”

Once Solberg installed himself in the top six, he stayed in the fight right up until the death. 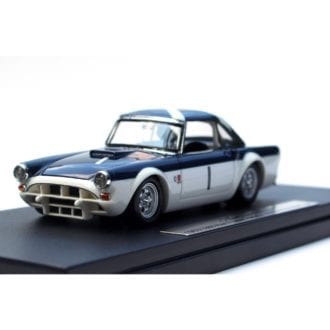 He had displaced the more experienced Toyota driver Takamoto Katsuta, and was doing a decent job of keeping Ogier at arm’s length.

It was tough going though. Ogier, with the championship on his mind, was ultimately baring down, displacing Solberg for sixth on SS7.

Then, there came the mistake: off into the snowbank and out of contention. Classic error on a snowbound event.

But it wasn’t Solberg who made it. It was Ogier. In his desperation to keep ahead of the young charge, he had crashed out on the night stage. The young pretender reclaimed sixth.

Solberg maintained his impressive performance right the way up to the end of the rally.

Coming up the final turn of the final and extra points-paying power stage, Solberg’s ambition finally outran his adhesion.

His right-rear wheel clipped a snowbank and span him round in sight of the finish line. He fortunately only lost one place, finishing his first ever WRC event in an impressive seventh place.

For a 19-year-old with no WRC experience, the drive was incredible.

What contributed to the error on the last stage, with a sixth in sight?

“Well, it was maximum attack, you know!” he says. “I went absolutely flat out and just couldn’t see how the time was gonna be.

“It could have been power stage points, I could’ve beaten Ogier and Tänak, it was quite close.”

The youngster admits their experience showed on this rare occasion

“The limit those guys have, it takes a lot of experience. I had the spin, but it’s okay, it’s nothing major and it was a part of the learning I guess.”

Despite the accident, Hyundai boss Adamo still couldn’t hide his joy at the result. 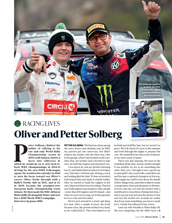 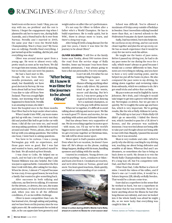 Petter Solberg climbed the ladder of rallying to his one and only World Rally Championship crown in 2003 with Subaru, before a move into rallycross in which he would go…

“He said it was way above his expectations!” Solberg comments, clearly happy with the judgement. “You know, he was so happy and very proud. He gave me a big hug and said he was very, very happy.”

Oliver’s WRC champion dad Petter was known for taking no prisoners, and asked if he would compare his own driving style with his father’s, Oliver notes at least one difference.

“I think I may be a little bit calmer than him inside the car,” he says. “But I still think the driving style, I guess is quite similar.”

So where will Oliver take his cool yet super quick driving style next? The Scandinavian is confident yet sanguine.

“The plan is WRC2,” he says. “Hopefully, I can do some more WRC car driving, but we’ll see. There’s no plan really.

“It’s quite a simple answer. It’s to be in WRC for a long time, and, hopefully, we will become world champion.”