It’s not just Jaguar bringing back the classics. Aston Martin is building the DB5s from ‘Goldfinger’ for £2.75 million each, and Andrew Frankel is wholly supportive of the project 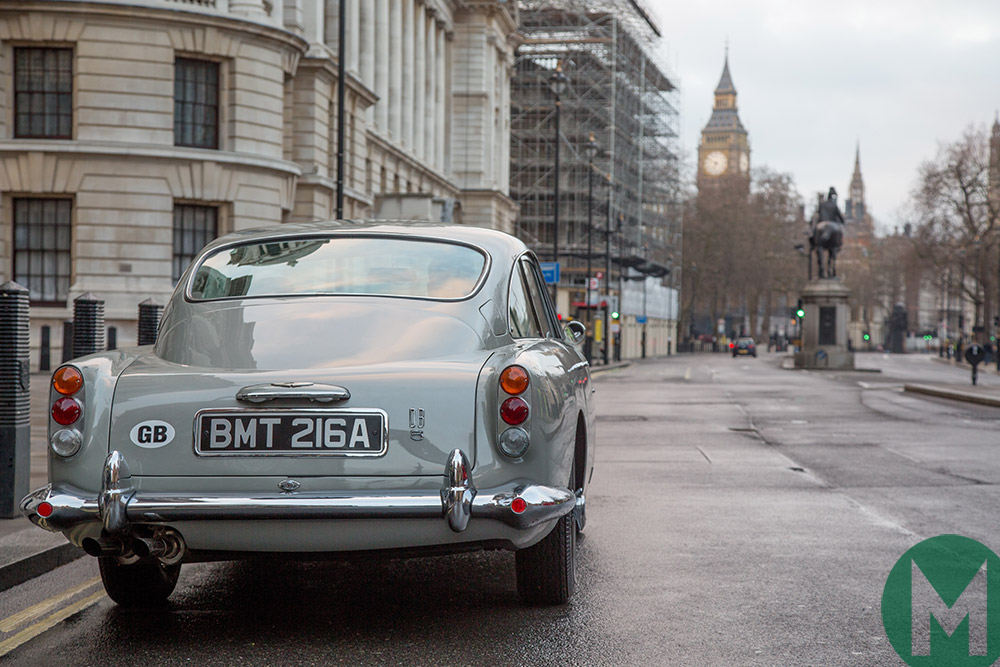 Aston Martin is going to build 25 new DB5s that will be all but identical to the iconic car used by James Bond in ‘Goldfinger’. Right down to their Silver Birch paint, save ‘some sympathetic modifications to ensure the highest levels of build quality and reliability’.

The marque is working with Eon Productions – which owns the James Bond brand – and its special effects supervisor Chris Corbould, to make sure each car is as gadget-laden as possible.

Two other things you should know about these cars: each will cost £2.75 million before local taxes and none will be road legal, at least as sold by Aston Martin. I am sure all, or at least most, will have been sold long before news of the project reached the public domain, which provides the clearest view yet into the world of the people who’d spend such sums on something that is, at the heart of it, a rather collectible toy.

It’s no surprise that the cars are not road legal. None of the ‘continuation’ cars produced by Aston Martin and Jaguar are: their designs meet none of the safety criteria with which all cars produced by such companies are required to comply before they can be sold to the public, and their manufacturers are too large to be able to take advantage of the low volume type approval exemptions that allow Caterham, Ariel and other small manufacturers to stay in business. But that does not mean an enterprising owner could not submit the car for approval once acquired, in the same way as might someone who’d built a special in their garage.

I would have precisely no interest in owning one myself even if I were in a position to spend that amount of money on a car of limited use, but if others do, who am I to say they should not?

And, to Aston Martin and its customers, the fact the cars aren’t road legal actually presents a particular opportunity in this case. For, while the company will only admit to revolving number plates in public, as the cars can’t be driven in public I can’t see why a number of other authentic ‘refinements’ can’t be fitted too, like the smokescreen, oil slick and tyre slashing wheel spinners, though I think the machine guns might prove a fairly large breach of our gun laws.

And yes, I know what you’re all thinking, but having been tutored in the ways of the Martin-Baker ejector seat before being flown in a fighter strapped to one, I think it unlikely, not least because of the amount of explosives or rocket power involved, not to mention the likely collateral damage to the DB5. Maybe the seat can be fitted atop an enormous spring allowing the driver to eject any passenger who falls into disfavour like Zebedee from The Magic Roundabout…

What do I think of these cars? I think they are terrific. If customers really want to give Aston Martin (and presumably Eon) millions for a new lookalike 007 DB5 that will likely never be seen in public, I see no harm in it whatsoever. And I can see a great deal of good in terms of how much better normal Aston Martins will be that have benefitted from additional investment surely measurable in of millions that will result from this project. I would have precisely no interest in owning one myself even if I were in a position to spend that amount of money on a car of limited use, but if others do, who am I to say they should not?

Indeed not even my usual concern about continuation cars – that over time they re-appear claiming to be originals – is hardly a concern because of what happened to the original Goldfinger Aston Martin. Actually, that should be Aston Martins.

Four were used in connection to the film, but two only for publicity purposes after the film had wrapped, whose locations and identities are well known. As is one of the cars actually used in the film – the so-called ‘road car’. The problem is that this car never had any of the gadgets fitted to it in period and was just used for driving shots. The car everyone thinks of as the Goldfinger DB5 – the so-called ‘effects car’ – was stolen from a hangar at Boca Raton airport in 1997 and has not been seen since. Years from now someone could try to pass off a continuation car as that car, but as it would instantly become the most heavily scrutinised car on the planet, I think the chances of pulling it off would be vanishingly small.

On a wider note, I do wonder how long manufacturers will be able to ride the continuation wave. Aston Martin has already committed to making 25 continuation DB4 GTs, and Jaguar is making the same number of new D-types to go with XKSSs and E-types already produced. I note too that Ferrari, which has surely the most to make from this market, has so far steadfastly refused to get involved, though for reasons not known to me. But, for now, at least if the customers exist and re-making old cars provide money to invest in new ones, good luck to them.