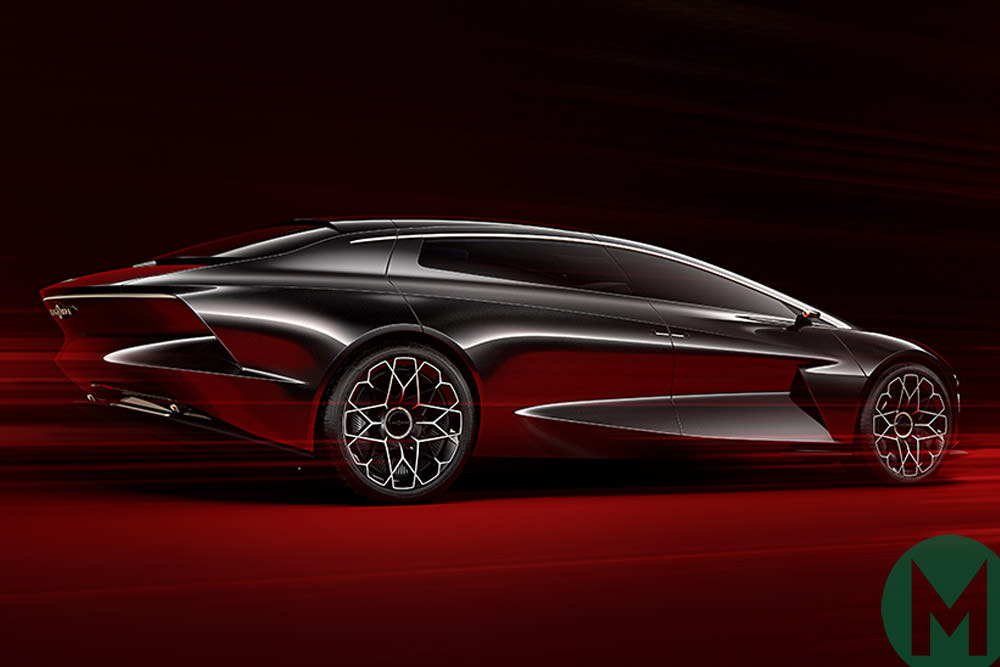 We have known for a while now that Aston Martin was not just going to leave Lagonda as an untapped resource. We knew the brand would be relaunched at some stage and that a couple of cars – likely to be an SUV and a saloon – would nose their way out its new St Athan factory in Glamorganshire, sometime early next decade. But what I think very few would have predicted was not just that Lagonda would be revived at this year’s Geneva Motor Show, but the way in which it would be done.

Which was to unveil what the company claims with justification to be the world’s first modern luxury zero-emissions car. According to Aston boss Dr Andy Palmer, Lagonda will enter the market again in 2021 as an all-electric rival to Rolls-Royce, as focused on the future as its Goodwood-based rival is steeped in tradition. To ram the point home he pulled the wraps off the Lagonda Vision Concept, a car so futuristic in appearance, it made Bill Towns’ 1970s Lagonda look almost conservative by comparison.

Of course Lagonda doesn’t have to build the Vision Concept and it will be interesting to see how much of the super-sharp monobox styling with its innovative rear doors (that not only hinge at the back up also have roof openings that allow you literally to stand up and step out) survive into production. But because its electric architecture allows a ‘skateboard’ structure, the requisite design flexibility above floor level should be achievable.

In packaging terms what this layout achieves is remarkable. The car is far shorter and lower than any Rolls-Royce saloon on sale, but inside there is sprawling space to spare, even before you’ve put the car into autonomous mode, and turned the front seats around to face those in the back. Inside Lagonda design chief Marek Reichman employed David Linley who, when briefed with creating a modern yet luxurious interior threw away the wood and leather rule book and went to work with cashmeres, silks, carbon fibre and ceramics. It takes a skilled and experienced hand to make such materials work in harmony, but I’d say it’s been achieved with space to spare.

It’s all very well to play so fast and loose with convention with a concept car. It’s a different matter when producing something with the durability people now expect, in four figure volumes per year and selling it at a price the customer is prepared to pay and which will return you a healthy profit. All of those challenges remain, complete with those required to package crash structures, batteries, motors and everything else.

But that’s all for the future. For now I’m just happy that Lagonda is back doing what Lagonda has always done best: being brave. I think Aston Martin is correct when it identifies the brand as one not tied to its history and clearly the fact that no other major manufacturer is close to offering a bespoke luxury electric vehicle (Teslas are great, but very much positioned in the volume-oriented premium market) provides a clear opportunity for what the company enjoys describing as a 100-year-old startup.

And the truth is Lagonda can do almost anything and be true to its heritage. It can be bold like the Towns car, it can be beautiful like those produced in its 1930s heydays, it even has a Le Mans win to its name. All it must not do is tread on the toes of Aston Martin, so don’t expect any chintz-lined Aston Martin Lagondas or indeed, any racy Lagonda Aston Martins. The plan is for the brands to live as entirely distinct entities under the same roof or, more accurately, roofs.

Aston Martin has just declared its best ever results, and in terms of brand perception is now the fastest growing of its kind in the world. But, as Palmer is keen to point out, he and his team have only just got started. Delivering on the promise of the Lagonda Vision Concept will be unimaginably hard work, particularly in the very tight timeframe Palmer has prescribed. It might need all sorts of technical joint ventures, beyond even the one that already exists with Mercedes-Benz. But it does ensure one thing: whatever happens, it’s not going to be boring. For better or for worse, this most enigmatic of car companies looks likely to keep up thoroughly entertained for the foreseeable future.