McLaren Automotive must be hoping that the next ten years follows a smoother trajectory than its first. The start was horrendous – its launch car, the MP4-12C was introduced before it was finished, with too many flaws and too many production-related faults. As one very senior member of its management once confided to me: ‘it was worse than had we not launched it at all.’

Things did get rapidly better: the 12C’s problems were discreetly fixed, extant owners looked after with free upgrades and then came a raft of cars that rightly assumed their place among the supercar greats. You’ll know their names: P1, 675LT, 720S and so on. But just as a good reputation can take years to build, so can a poor reputation take equally long to shake, and I’m not sure McLaren really recovered fully from that start-line setback.

Right through the last ten years I’ve heard tales on unreliable cars despite the fact that I’ve driven dozens, usually hard and fast and often on circuits, and not been let down by one yet. Last year I ran a 720S as a daily driver for six months, left it buried in snow for a week, yomped it over the Alps, flogged it round tracks and save the headlights losing their ability to see around corners until I turned the engine off and on again, not one thing went wrong with it.

I’m not saying all McLarens have been trouble-free or even close and I believe, for instance, that early 720Ss did have some software issues, but these are tiny volume, highly complex supercars and my experience of them has been at stark variance to what I’ve read about them elsewhere.

But that’s not the only reason things turned south for McLaren this year: luxury car brands have been clobbered by Covid and uncertainty over Brexit won’t have helped either. Which is not to say McLaren hasn’t been making mistakes of its own: certain models were oversupplied to the market, hitting residuals, while the decision to refuse to put a precise number on how many 600LTs it would build is now acknowledged to have been a mistake.

The results have been painful just to watch, so goodness knows what it must have been like in Woking these last few months as thousands were laid off, the vast majority from the automotive division. But it was the news that the company was being forced to sell and lease back its own HQ that to me provided the clearest indication of just how difficult life had become. 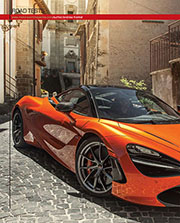 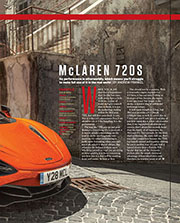 Its performance is otherworldly, which means you’ll struggle to make full use of it in the real world | BY ANDREW FRANKEL When you slam shut that extraordinary door for…

What must be so galling is that the world is almost unanimously agreed that McLaren hasn’t launched a poor car since the 12C launched a decade ago. In fact, most have been bloody brilliant. That 720S was and remains the finest modern supercar I’ve driven while the 570S when introduced was so far and away the most desirable car in its category that rivals presented as lambs to the slaughter. True not everyone loved the Senna and the GT was afforded a merely warm rather than a rapturous reception, but the most prolonged criticism McLaren has faced is that’s it has not varied the recipe enough. And insofar as every single car it has built in ten years has been a carbon-tubbed supercar with a twin-turbo V8 driving the rear wheels alone through a seven-speed double-clutch box, you can see a point to be made there.

That is all about to change. Indeed the 765LT launched last week is the last new McLaren before the formula changes for good, of which more in a minute. For now I think this third LT is another fabulous car. I say ‘think’ because I’ve only been allowed to drive it on a circuit which, for a car that will spend most of its time on the road, is fairly limiting. But on track it is incredible: though based on the 720S, it’s 45bhp stronger at 754bhp, 80kg lighter and only 35kg heavier than the entirely track-focused Senna. It’s four seconds a lap quicker than the already preposterously fast 720S, yet just 2.5sec slower than the Senna. At £280,000 it’s also little more than one third the price of its hypercar stablemate and just 765 will be built in coupe form, followed by a no greater number of Spiders.

So it’s stunningly light, ridiculously powerful and fabulously fast. But so too is it endlessly rewarding with a precision and poise you’d simply be unable to provide in a heavier car. It keeps your eye on the ball mind: it’s not the kind of car to approach in a casual manner. It’s a very serious tool and needs to be treated that way if embarrassment is to be avoided. I have no problem with that. I like such cars to keep me focused and challenged.

But soon these LTs will be built and attention will turn to the future, which arrives in the Spring as a car known at present only by its P16 internal codename. We don’t even really know what it’s replacing because while the Sports Series cars – the 540C, 570S, 570GT, 600LT and 620R – will stop production if they have not already, I understand McLaren is moving away from its current structure of Sport, Super and Ultimate series cars to one where there will be just supercars, GTs and hypercars. Which actually makes far more sense and even suggests the possibility of a McLaren 2+2.

What we do know is that P16 is new from the ground up, carry over components being limited to a few fastenings. Its tub will be made by McLaren in its new composites facility rather than supplied by an external supplier and its engine will be a smaller V6 boosted by a hybrid battery pack. Far from a reduction in engine power resulting, expect the P16 to have more power than a 570S, and probably quite a lot more. Impressively, weight gain has been kept to a double-digit number of kilos.

Will it do the job? Without seeing how it looks and discovering how it drives it is impossible to say. But I will tell you this: someone I know there who is not inclined to spin a line said ‘think of the last ten years as McLaren 1.0 followed by 1.1, 1.2 and so on with each additional model. P16 is McLaren 2.0. A new start.’ Let’s hope so.