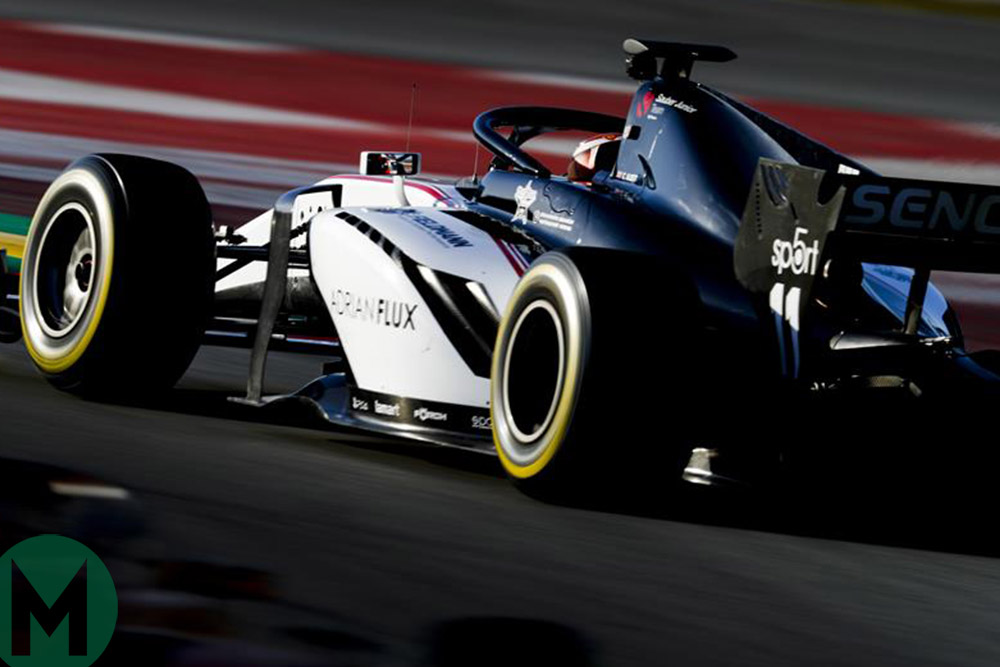 The 2019 Formula 2 season begins at Bahrain this weekend as the grid of racers battle for places in Formula 1, IndyCar and other top motor sport championships. Here’s a list of the 2019 teams and drivers.

Swiss driver Louis Délétraz switches to the reigning teams’ champion Carlin from the Sauber-affiliated Charouz. He admitted his 2018 Formula 2 campaign was “a bit of a disaster for many reasons,” though he did get a Haas Formula 1 test late in the year. Now self-admittedly he needs to aim for wins and the title in 2019.

Japan’s Nobuharu Matsushita continues to be patiently coached by Honda, which hopes he’ll be the next Japanese F1 driver. To this end he had three years in GP2/F2 from 2015 to ’17, then last year did a season in Super Formula where he was 11th in the championship. Now he’s back in F2 and could hardly ask for a better opportunity than at Carlin.

Rookie Nikita Mazepin has plenty of promise, and won four races in GP3 last year – double the number of title winner Anthoine Hubert – on the way to runner-up spot in the standings. It’s promise that Mercedes has noticed, which will give the Russian F2 rookie 12 days of private testing this year in its 2017 F1 car.

Nyck De Vries, McLaren protégé, finished fourth in last year’s F2 table, and all three ahead have since graduated to F1. Yet it was an underwhelming campaign all told for the Dutchman at the Prema team with which Pierre Gasly and Charles Leclerc won titles. He’ll be hoping his ART switch brings an overdue upturn.

Another McLaren protégé, Brazilian Sérgio Sette Câmara largely matched the pace of his famous Carlin team-mate Lando Norris last year, but was scuppered by various issues. The Brazilian hotshoe has now decamped to the DAMS squad and he should be in the thick of title contention.

Nicholas Latifi has two F2 race wins in two seasons, though struggled with the switch to new cars in 2018. DAMS has given the Williams reserve another go, and Latifi insists his 2019 target is the title. Plenty make comparisons with Lance Stroll but as a few also maintain with the Racing Point F1 driver, there may be more than money to Latifi.

Last year in FIA Formula 3 Guanyu Zhou often looked as quick as anyone, though his title tilt faltered mid-season. Now with the squad that has taken over Russian Time he should make a decent account of himself in F2 in his rookie season. He’s also freshly stepped into a Renault F1 development driver role, having previously been on Ferrari’s books.

Luca Ghiotto showed flashes of form at Campos in F2 last year in a car that often didn’t handle well – still managing four podiums and a near miss of a win. For 2019 he switches back to Virtuosi – he drove for the team in its Russian Time guise in 2017 and finished fourth in the table. Word from the team is that he has slotted back in like he’s never been away.

Many eyes will be on Mick Schumacher, and not just due to his famous name. The rookie took last year’s FIA F3 title with an astonishing late run, though what the upturn was based on remains a matter of debate. This year at Prema – as well as with some F1 test outings rumoured to be in the offing – Schumacher has plenty of opportunities to silence his doubters.

Sean Gelael must by now count as a series veteran, as this will be his fourth full season in F2 and its predecessor GP2. It’s hard to point at progress either as he’s finished 15th in the table in each of the last three years. Last year he got second place in the Monaco feature race, and is back for second year at Prema.

The Charouz cars showed good pace in the team’s first F2 season last year, and now for 2019 it freshly partners with Sauber. It has Callum Ilott, from the Ferrari roster, in its driver line-up and the Briton is fresh from finishing third in the GP3 table behind his ART team-mates Hubert and Mazepin, taking two wins.

Ilott is joined by another GP3 graduate in American Juan Manuel Correa. Correa’s GP3 campaign was much more trying than Ilott’s, him ending up 12th in the standings with a best finish of fourth at Jenzer Motorsport. Less experienced than almost all of his rivals, he admits the top seven in the championship will be a good outcome for him this year.

French driver Dorian Boccolacci gets his first full F2 season after competing in the final few rounds with MP Motorsport last year, having started 2018 in GP3 with the same squad. He subsequently did some post-season testing with Campos and the squad was impressed enough to take him on for 2019. He’s also fresh from victory in the Andros Trophy ice racing series’ Elite class.

Renault F1 test driver Jack Aitken returns for a second F2 season, this time at Campos rather than ART. He has plenty of advocates and promise but last year he didn’t quite measure up to his champion team-mate George Russell, taking just one win – in a reverse grid race – and 11th in the standings.

The last to be confirmed in the 2019 F2 field, Jordan King is a familiar face – both to F2 and to his team – returning after an IndyCar year as Ed Carpenter Racing’s road and street course driver. Prior to that he completed the 2017 F2 season with MP Motorsport, getting 11th in the standings, and had two GP2 seasons with Racing Engineering prior to that.

An Indian who races with a Dutch licence, Mahaveer Raghunathan joins F2 with a so-far meagre record. Completing most of the 2015 FIA F3 season as well as completing the two Barcelona races in the 2016 GP3 season-opener round are the main points of note. His best finish across the two was 20th place.

Tatiana Calderon enters F2 after three years in GP3; last year was her best therein with 16th place in the standings. For her F2 debut she joins the HWA-affiliated Arden team, with whom she also made her GP3 bow. She also has an ongoing Alfa Romeo F1 testing deal.

Anthoine Hubert last year became the final ever GP3 champion. He only won two races on the way – and none after Silverstone – but don’t let that full you. His approach was textbook in title-winning with 11 podium finishes and always erring just on the right side of caution, and it all ensured him the crown with a race to spare.

Another Ferrari Driver Academy member and another son of a famous father, Giuliano Alesi joins F2 after three years in GP3, all of which were also with Trident. His second season therein was his best with three race wins and fifth in the standings. Last year he tapered off a little to get just one victory and seventh overall.

Swiss driver Ralph Boschung is set for his third F2 campaign, as well as to compete with his third team in that time. He finished 19th in the standings in 2017 with Campos and while last year, at MP Motorsport, he improved a solitary place in the final standings he has legitimate claims to a hard-luck tale at various points.