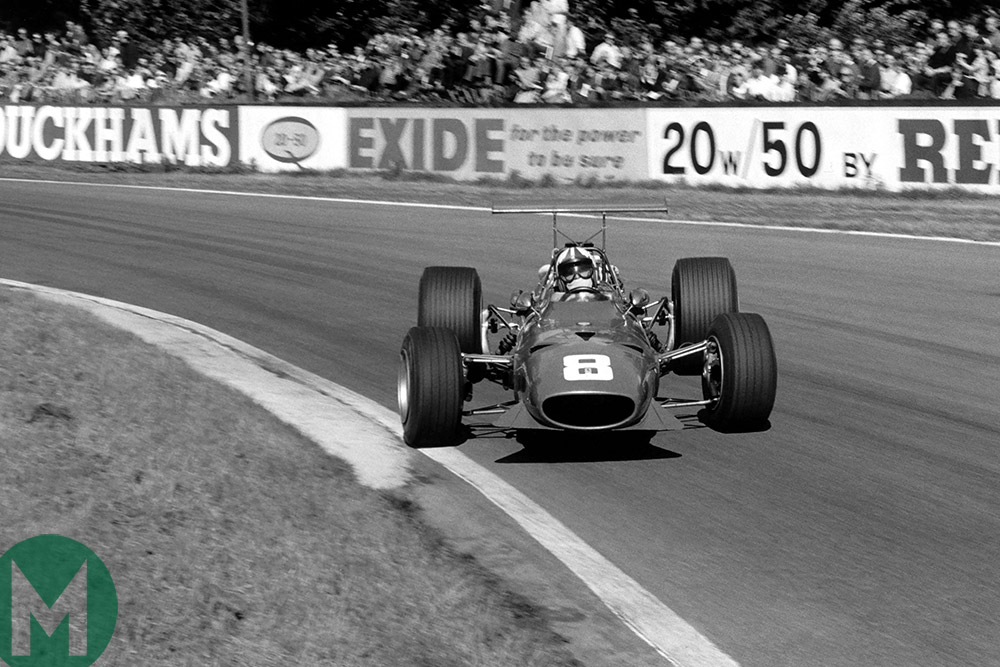 It was August 1968 and I had just turned one and so remember nothing of it.

Which is a shame because Mid-Cheshire Motor Club, with financial support from Guards Cigarettes, had persuaded Ferrari to send three – three! – of its 312s for Chris Amon, Jacky Ickx and category newcomer Derek Bell to drive.

Also present were the Lotus 49Bs of Graham Hill and Jackie Oliver, the Brabham BT26s – two plus a spare – of ‘Black Jack’ and Jochen Rindt, and a brace of BRMs overseen by Reg Parnell Racing for Pedro Rodríguez (a works car in disguise) and Piers Courage.

Star of the show, however, was the Ken Tyrrell-run Matra MS10 with which Jackie Stewart had two weeks prior won the German Grand Prix at a fog-bound and soaked Nürburgring by more than four – four! – minutes.

On this occasion, however, rain hampered the spring-heeled Scot’s bid for pole position, Hill beating him to it by six-tenths in Friday’s dry first session.

The event had been brought forward from its usual September slot in the aftermath of the French strikes that had caused Le Mans to be rescheduled.

F1’s month-long break between the German and Italian GPs was thus filled.

And summer in the North West came up trumps when race day dawned dry and sunny.

The New Zealander was unconvinced of the efficacy of designer Mauro Forghieri’s moving of the wing forward from its original position but he had been unable to convince him of the aero of his ways despite their mutual respect and friendship.

Proceedings got underway with a 19-lapper for Group 4 sportscars won by Mike de’Udy’s Lola T70-Chevrolet after a protracted battle with the sister car of Jo Bonnier was decided by some rubbin’ is racin’.

And they would end with another 19-lapper – a British Saloon Car Championship encounter that provided a 1-2-3 for the Ford Falcons of Brian Muir, Roy Pierpoint and David Hobbs.

The meat in this sandwich was the 40-lap main event, which was – get this! – flagged away by Juan Manuel Fangio.

Oulton had done us proud.

Stewart got the jump from the middle of the front row to lead Amon and Hill as a forest of wings flew down The Avenue.

Downforce had quickly exerted its grip since the introduction by Ferrari and Brabham of aerofoils at Spa in May and all bar the back-row no-hopers had them by Oulton Park.

Colin Chapman’s was, of course, the biggest and tallest and mounted to the rear hubs of the Lotuses for maximum effect. Ferrari’s was amidships and fixed to the sprung element, as was Stewart’s, though his Matra had since Germany gained Lotus-type canards.

Hill moved ahead of Amon on the second lap and set his sights on Stewart.

The latter’s other GP win so far that season had been registered at Zandvoort during a North Sea storm in June and Dunlop’s R7 pattern – with an extra central drainage channel cut into its 970 compound – received much of the credit.

Birmingham’s finest had yet to convince in the dry, however. Not that it had had much opportunity to do so in a season regularly battered by rain.

But Stewart seemed to have everything under control, including a locking front brake.

The same could not be said of the rest: Hill retired on lap seven when his Lotus lost drive; on the same lap Courage’s front suspension collapsed with surprisingly little drama; Bell pitted on lap nine when his gearbox jammed in fourth – and would retire after 25 when its engine let go; Brabham’s troublesome quad-cam Repco V8 added to its tale of woe with two more failures; and Ickx was stymied by a misfire caused by an untraceable electrical gremlin.

The race in truth was not a classic.

But it was a master class of high-speed precision, Amon in particular scribing graceful arcs as he balanced his handsome Ferrari, with its vipers’ tangle of exhausts, on the throttle through fast corners still demarked by trees padded by the occasional bale of hay.

The New Zealander was unconvinced of the efficacy of designer Mauro Forghieri’s moving of the wing forward from its original position but he had been unable to convince him of the aero of his ways despite their mutual respect and friendship.

This, though, was to the benefit of a crowd that witnessed artistry aptly recalling Fangio aboard a Maserati 250F at Rouen in 1957.

Amon, don’t forget, had first caught the eye of the overseas stars in 1961/’62 with his sensational handling of a 250F; some reckoned that this epitome of the front-engined GP car had not been driven as fast since, well, you know who.

I feel sure that Amon and Fangio would have exchanged pleasantries afterwards but it was, of course, the ever-efficient Stewart who shared the back seat of an Alfa Romeo Duetto with the five-time world champion on a lap of honour.

Whenever Amon had pushed, Stewart, his Cosworth DFV less melodic than Amon’s V12 amid the echoing trees but torquier and by far the better ‘package’, had been able to respond – they set joint fastest lap – and his eventual margin of victory was 4.6sec.

Like I said, I was one and this is what I missed.

Ask my Dad, however, and it was Amon’s day.