It arrived finally on 20 July 1957, at Aintree. Stirling Moss, having commandeered a Vanwall from injured team-mate Tony Brooks, crossed the line 26 seconds ahead of Luigi Musso’s Ferrari to score the first all-British win (bar Bosch ignition and injection, plus Pirelli tyres) since the world championship’s 1950 inception. 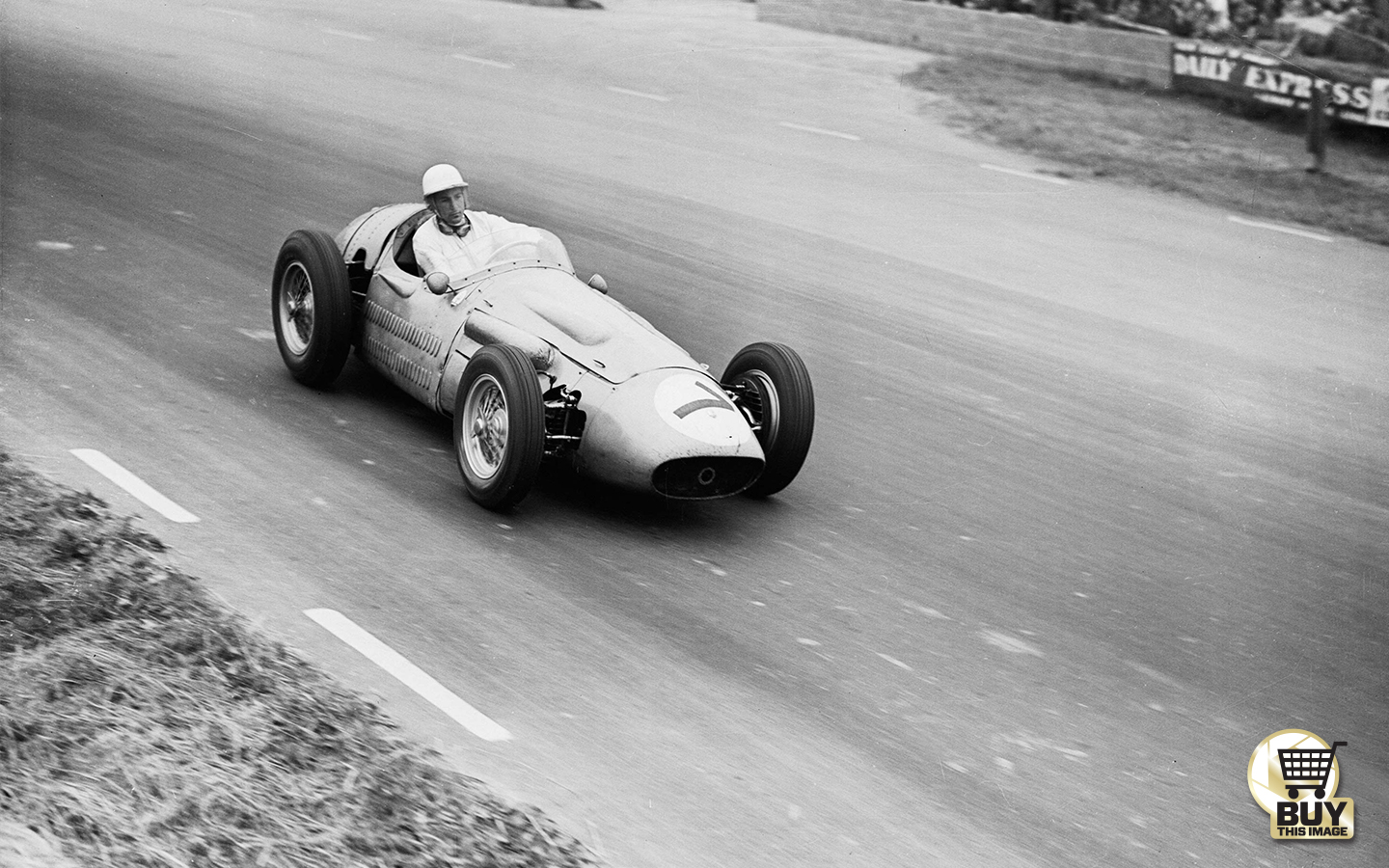 That British Grand Prix at Silverstone, 60 years ago today, was the first powerful indicator that the old order’s number was up – even though a 45-year-old won it in a Ferrari.

Although Brooks had scored a remarkable victory for Connaught against a phalanx of Maseratis in the non-championship Syracuse GP in October 1955, the whole thing seemed so preposterous that it was deemed a one-off by many.

Those ‘bloody red cars’ had the know-how and the numbers.

Even when the great British Racing Green hope, aboard the new, super-scientific Vanwall, designed by tyros Colin Chapman and Frank Costin, defeated the Ferraris to win Silverstone’s International Trophy in May 1956, doom-mongers pointed out that he was only on loan from Maserati.

Moss had indeed tested the best of British – BRM, Connaught and (older type) Vanwall – the previous winter before deciding to go Italian. This patriotic man had shown rather too much patience in the past and couldn’t be criticised for now looking after number one.

Besides, his perennial rival Mike Hawthorn, our first winner of a world championship GP, had gone British by joining Vanwall for 1955 – and regretted it.

And now he was having his doubts about his BRM. The P25 was astoundingly quick – Hawthorn had led a string of non-championship races – but frustratingly unreliable and unbalanced; during Goodwood’s Richmond Trophy it had rolled and pitched him out when a UJ seized.

Connaught’s B-type was the opposite: a fine handler short on power. Designer/boss Rodney Clarke was ahead of the game with his well-staffed drawing office and wind tunnel (powered by a Ford V8) but behind the eight ball in terms of finance. Had he had BRM’s money he might have been the ticket.

But it was Vanwall’s Churchillian owner Tony Vandervell who had the drive, the organisation and the resources.

All the right notes were there at Silverstone 1956 – it’s just that they weren’t necessarily in the right order. 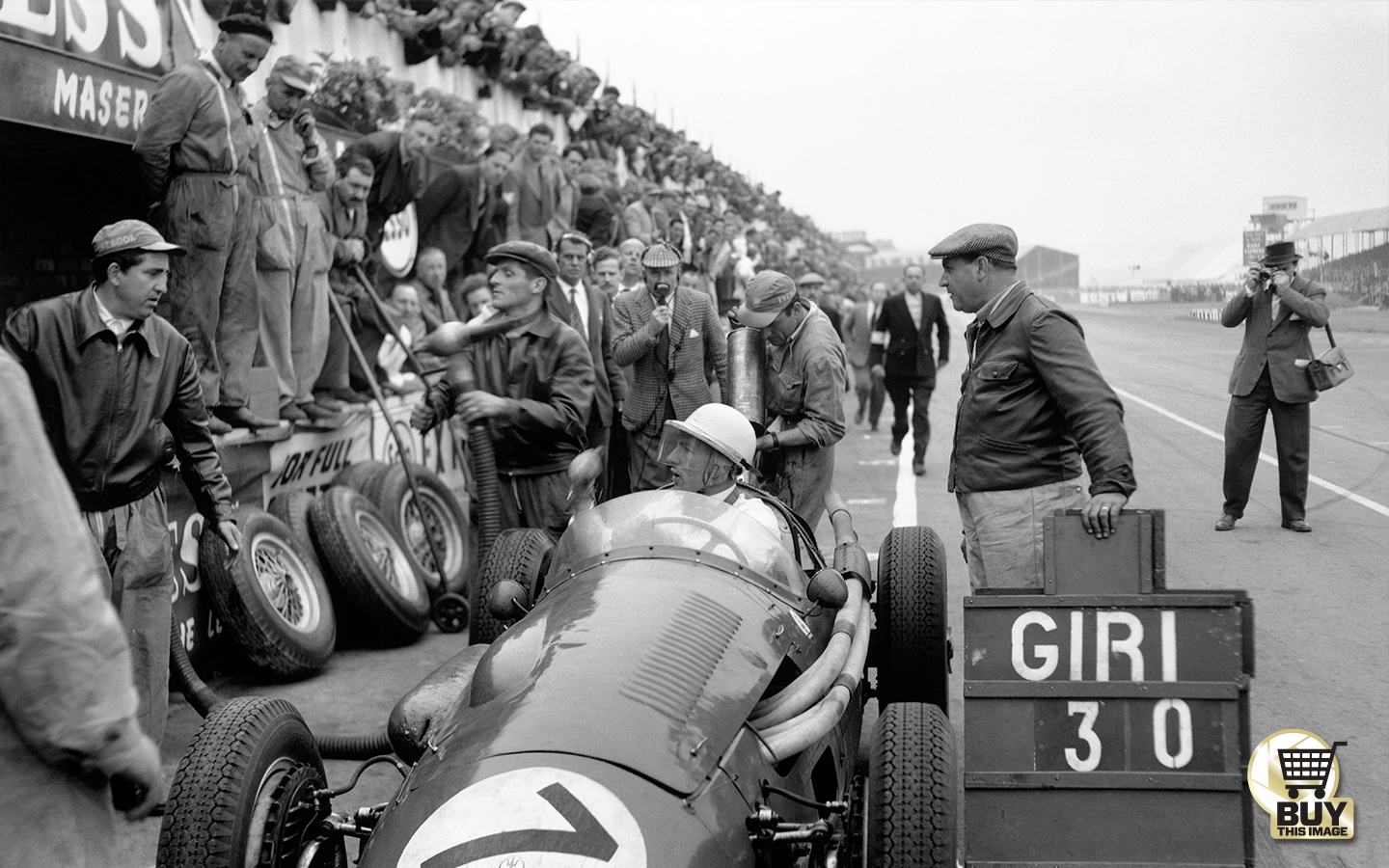 Of the 28 starters – by far the biggest GP field of the season and thus a sign in itself – 13 drivers were British, as were 11 of the cars: three each from BRM, Connaught and Vanwall, plus a (front-engine) Cooper-Bristol and an Emeryson-Alta.

Three of those drivers – Moss (back in his Maserati 250F and on pole), Hawthorn and Ferrari’s Peter Collins, winner of the previous two GPs and therefore the surprise points leader – started from the four-car front row. “The sort of thing,” stated Motor Sport, “that’s becoming pleasingly regular.”

Roy Salvadori was on the outside of the second row in his privateer Maserati, alongside the Vanwalls of ebullient Harry Schell and Froilán González, who had been coaxed from retirement in Argentina to return to the scene of both his GP victories.

The third row consisted of Ferrari’s Eugenio Castellotti, Brooks and the Alta-engined Connaughts of Archie Scott Brown and Ulsterman Desmond Titterington. The latter two were blessed with much talent yet these would be their only GP starts. Overseas organisers were unable to see beyond the former’s severe physical handicaps – Archie truly was remarkable – and his team-mate was soon to be claimed by family and business commitments.

Thus the first three rows contained six British cars and seven British drivers. Motor Sport again: “So many that the possibility of a British success [it meant for a car] was not unreasonable.”

The most telling stat, however, was less obvious. Of those magnificent seven only Salvadori, 34, was not in his 20s. Their average age was 27.

The overseas contingent included the race’s youngest – Maserati’s Cesare Perdisa was 23 – but its average age was 35.

The fecundity of Britain’s buoyant and diverse club racing, in particular its 500cc Formula 3, was beginning to bear fruit: Brooks and Collins were 24, Moss was 26 and Hawthorn 27. 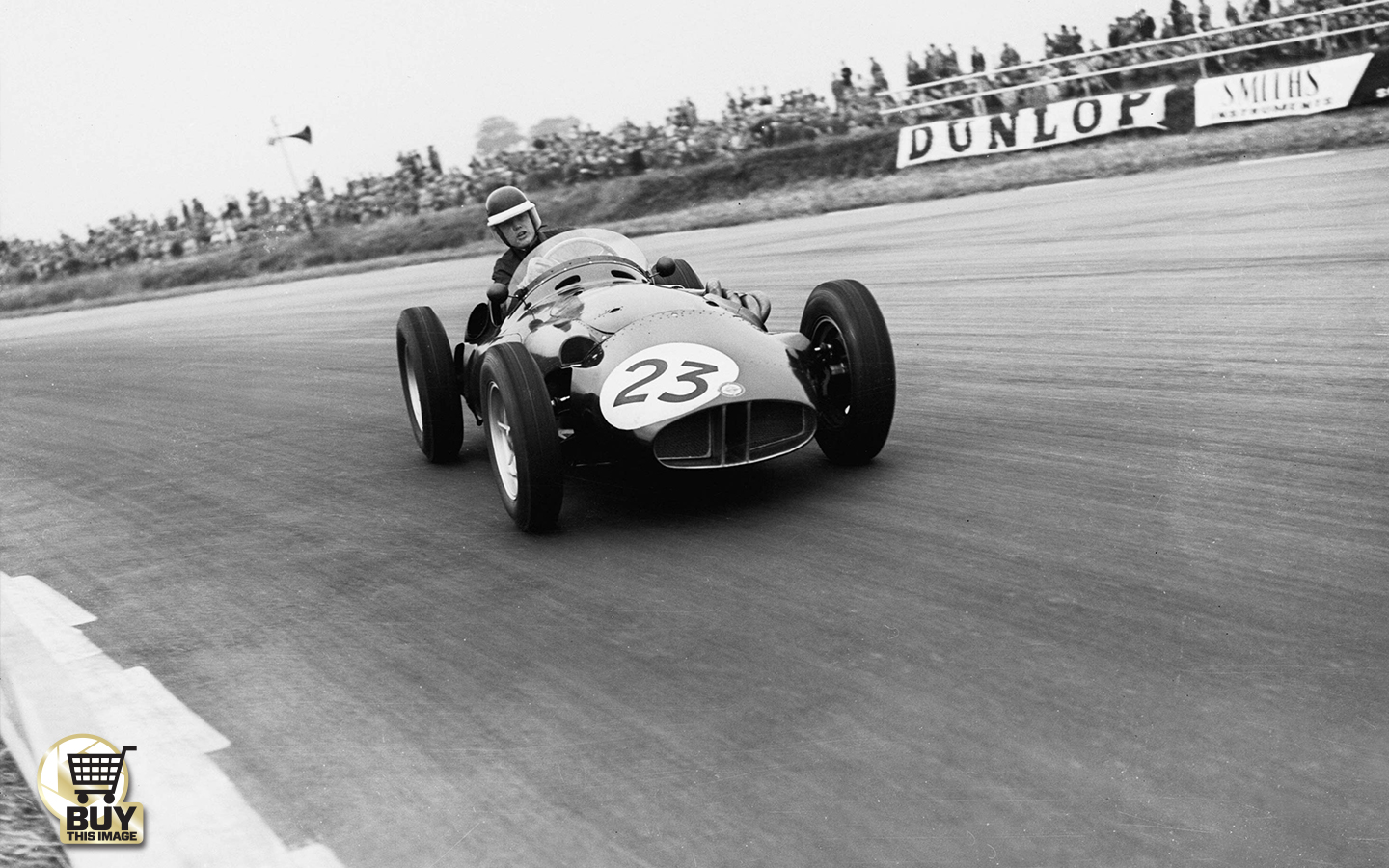 The first British marque to get its act together would have the pick of this crop. But though their cars showed speed at Silverstone, clearly they remained short of stamina.

The accelerative BRMs of Hawthorn and Brooks led the early stages, and home drivers for a time filled the first five places when – shock-horror! – Juan Fangio, perhaps feeling this pressure, spun his Lancia-Ferrari at Becketts.

But already the British cracks were beginning to show. Gonzalez broke a driveshaft at the start and team-mate Schell would soon be badly hampered by a duff shock absorber. Ron Flockhart’s BRM’s engine failed on the second lap. And Scott Brown, dicing with Ferrari’s Castellotti and ‘Fon’ de Portago, two of Europe’s hottest hotshoes, lost a wheel when a rear hub assembly collapsed on lap 16.

Moss took the lead from Hawthorn on that same lap. The latter had been slowing for a time and feared that he might suffer a repeat of his Goodwood mechanical failure. It was a good thing that he stopped when he did: on lap 23.

Brooks was falling back, too, and had been passed by an inspired ‘Salvo’, a recovering Fangio and a steady Collins when his BRM’s throttle linkage broke. Having jury-rigged a fix using a pen borrowed from a marshal, he returned slowly to the pits in the hope of receiving a sturdier repair.

A few laps, later, however, his throttle stuck at Abbey and the BRM rolled and pitched him out. He was lucky to escape with a broken jaw and chipped ankle – and the image of his blazing wreck was a stark reminder to the British. 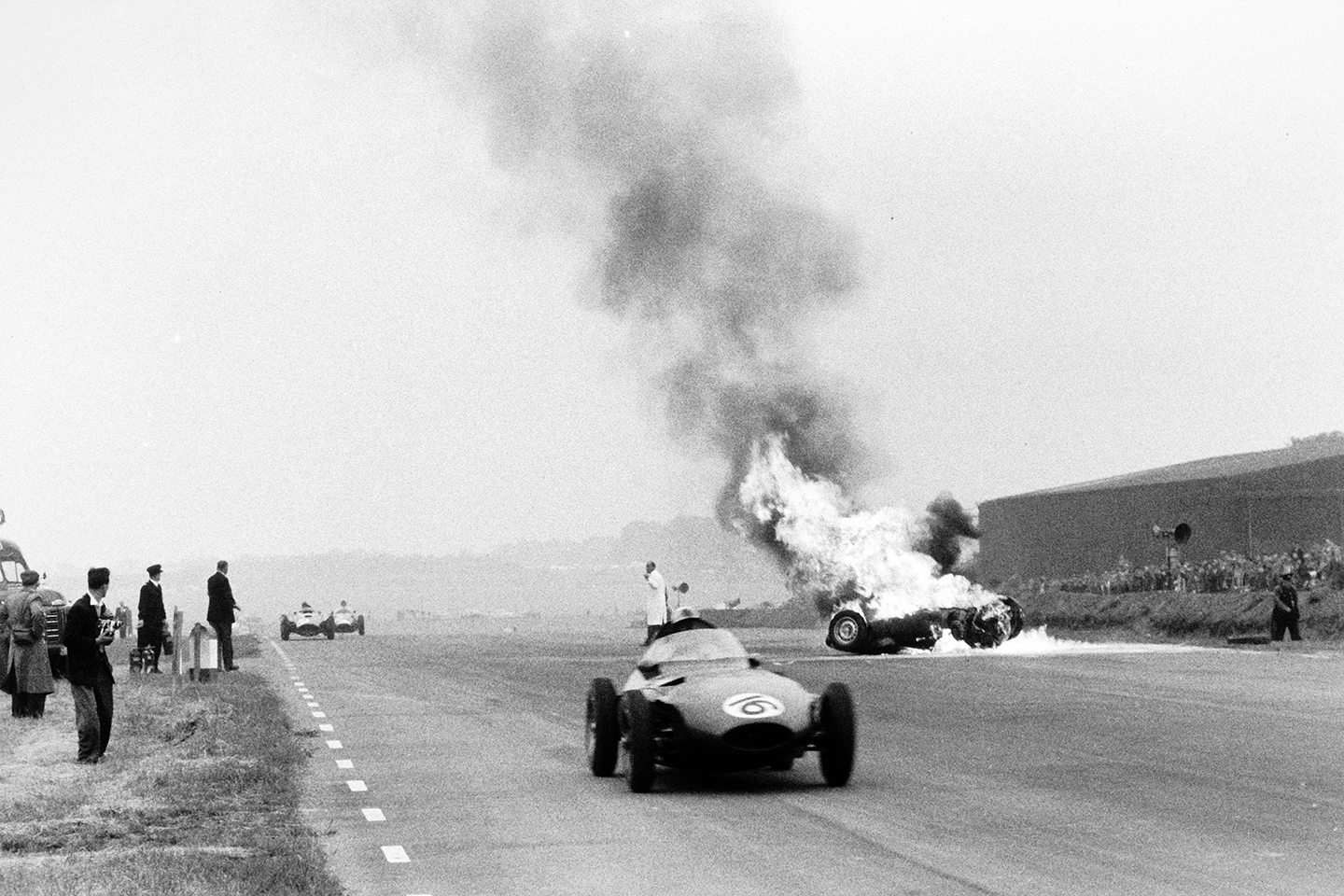 The race, at 101 laps, proved attritional even for the Italian cars. Moss lost the lead on lap 69 because of a misfire and a pitstop and would retire seven laps from home when his gearbox failed. Salvadori’s fuel tank came loose. And Collins would require two Ferraris, switching to Portago’s after his own exhibited signs of imminent engine failure, in order to finish second and maintain his championship lead.

And so it was left to Fangio to pick up the pieces – and the win – in a car with which he was decidedly unhappy.

That the average age of the top five was 42 – if you combine the ages of Collins and de Portago – indicated that experience counted for something still.

And that journeyman Jack Fairman’s Connaught, the best-placed British car in fourth, was three laps behind the winner indicated that Italian machinery possessed a considerable advantage still.

But change was in the air.

And a fundamental shift was brewing.

‘Nut brown Aussie’ Jack Brabham had endured a nightmare with the 250F in which he had invested every penny and had been nothing but trouble: he qualified last and managed only three laps before its engine let go. He determined to be rid of it and to return to Cooper.

That the latter’s new and nimble rear-engine F2 car had won that morning’s support race was no great surprise – but the fact that Salvadori’s winning average, in a car giving away a full litre to the F1s, proved just 2.65mph slower than Fangio’s most definitely was.

Brabham had no other choice. Luckily for him. And for Cooper. 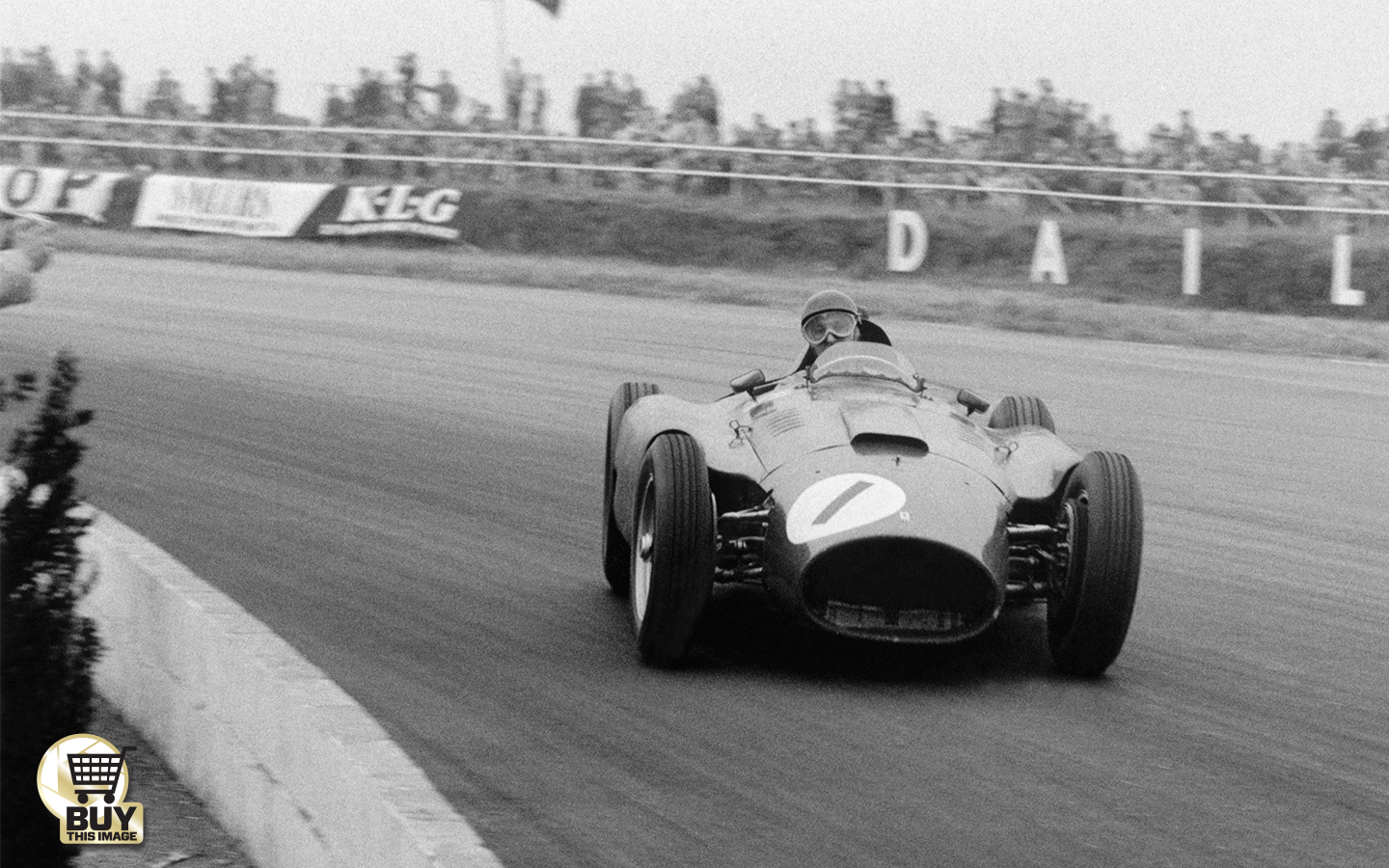