For Formula 1 fans of a certain age, watching Italy’s recent (and for most England fans, heart-breaking) progress through the Euro 2020 tournament will have inadvertently triggered memories of Michael Schumacher’s crushing dominance in the early 2000s-era of the Formula 1 World Championship.

As Italy captain Giorgio Chiellini and co chanted the Azzuri anthem with great gusto, so an image was conjured of seven-time champion Schumacher conducting his loyal Ferrari fans to Il Canto degli Italiani from the podium after yet another trouncing of the field.

Today marks 19 years since ‘Schumi’ won the drivers’ title in perhaps his most devastating fashion at the 2002 French Grand Prix, 11 rounds into a sixteen-race season, earlier than anyone had ever done it before – and since. Even more satisfying for the driver, it put him on a par with F1 legend Juan Manuel Fangio’s record for all-time drivers’ titles won – five.

When asked if he could improve upon 2002, Schumacher simply said “No.”

Ferrari’s eventual constructors’ championship points total was equal to the rest of the field combined. So complete was the Scuderia’s dominance, the FIA felt moved to bring in some of the most significant rules changes in decades in a bid to galvanise the competition.

Though 2004 was even more successful in terms of race wins (13 that year, to 2002s 11), no-one has ever bettered Schumacher’s comet-like streak to the crown in his Ferrari F2002 when it was all wrapped up by Magny-Cours on July 21. 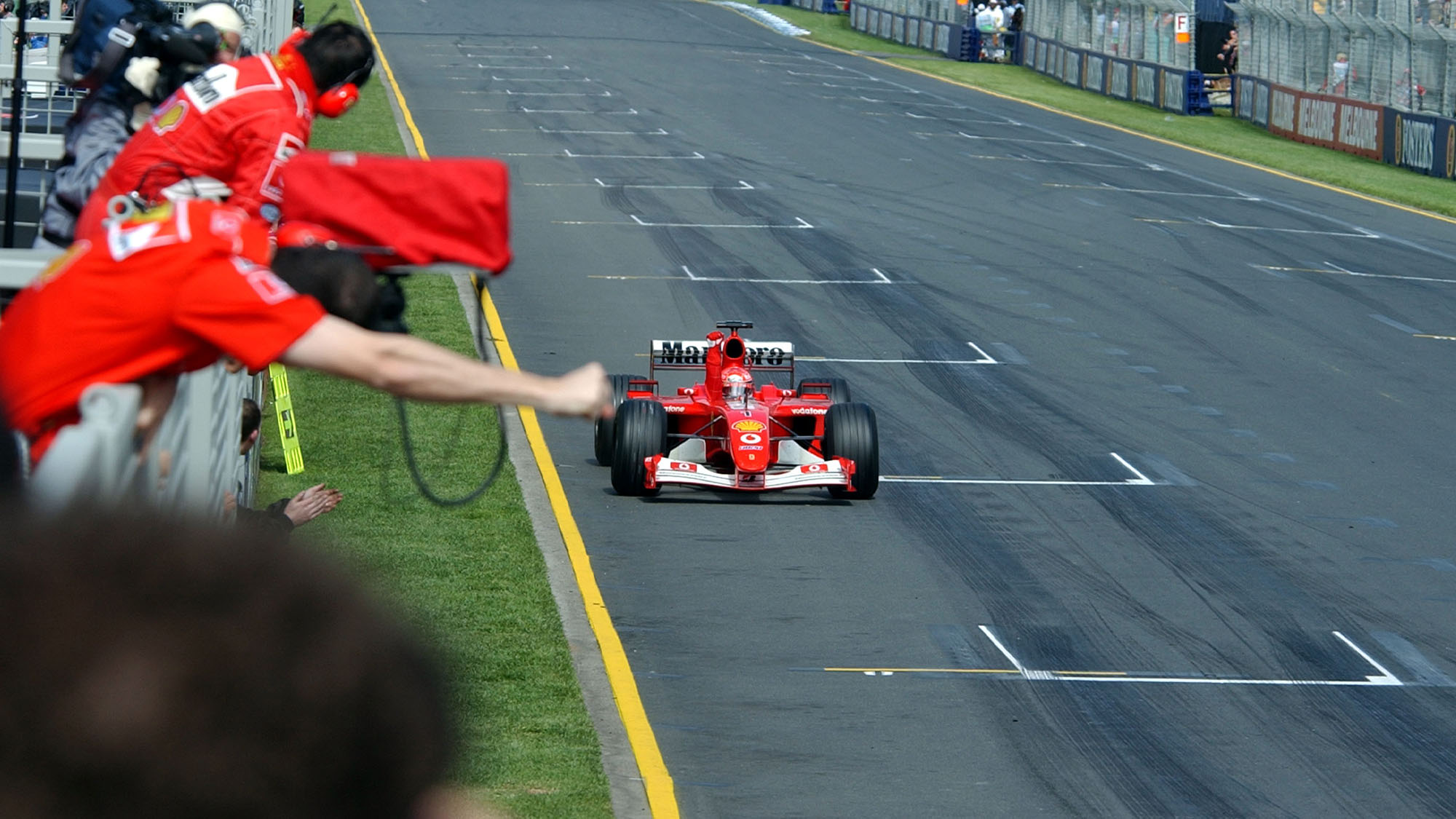 This story is perhaps F1’s ultimate example of man and machine being truly at one.

However, casting your mind back to the start of that 2002, one of the striking points about this season is that the German didn’t even start off the year with a new car.

The previous year’s F2001, designed by Rory Byrne, Aldo Costa and Nikolas Tombazis, was more than good enough to take Schumacher, by then the standard-setting F1 driver, to the 2001 drivers’ title with four races to spare – and then just carry on the next season.

The team elected to hold back the 2002 iteration to further hone its reliability, running a B-spec F2001 at the season-opening Australian Grand Prix.

“It wouldn’t be good for us if our 2002 car got beaten by Ferrari’s 2001 car,” said Williams-BMW technical director Patrick Head, presciently, ahead of the Melbourne race. 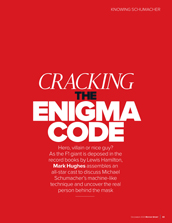 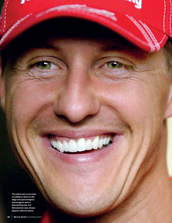 Ominously though, Schumacher did exactly that and won the first race of 2002 anyway, before ceding places one and two to brother Ralf and Williams-BMW team-mate Juan Pablo Montoya in Malaysia. But despite these early strong results, those at Maranello weren’t content in simply just carrying on with their old car’s philosophy.

The design team’s method for continuing the lineage of success was to junk what they had previously known before in order to take their success up to another level.

And they had the perfect driver – one who loved getting stuck into testing – with which to do it. Schumacher had chalked up 54 race wins in the ten years prior to 2002, but in terms of win-rate, he was only just getting started.

The key to Ferrari’s new racing iteration was weight – or lack of it. Byrne and his boys made the greatest gains in this area through the gearbox and were inspired by the design of their Italian compatriots, Minardi.

Ferrari had barely changed its basic gearbox assembly and construction since the early ‘90s and, despite winning recent titles in ‘99’, 00 and ’01, took Faenza inspiration to construct the F2002’s gearbox casing from lightweight titanium alloy, while also making it significantly smaller and stiffer than the previous version.

This, combined with the lighter suspension and uprights, meant the centre of the car’s gravity was much lower, giving the team more room to play with in terms of moving ballast around. 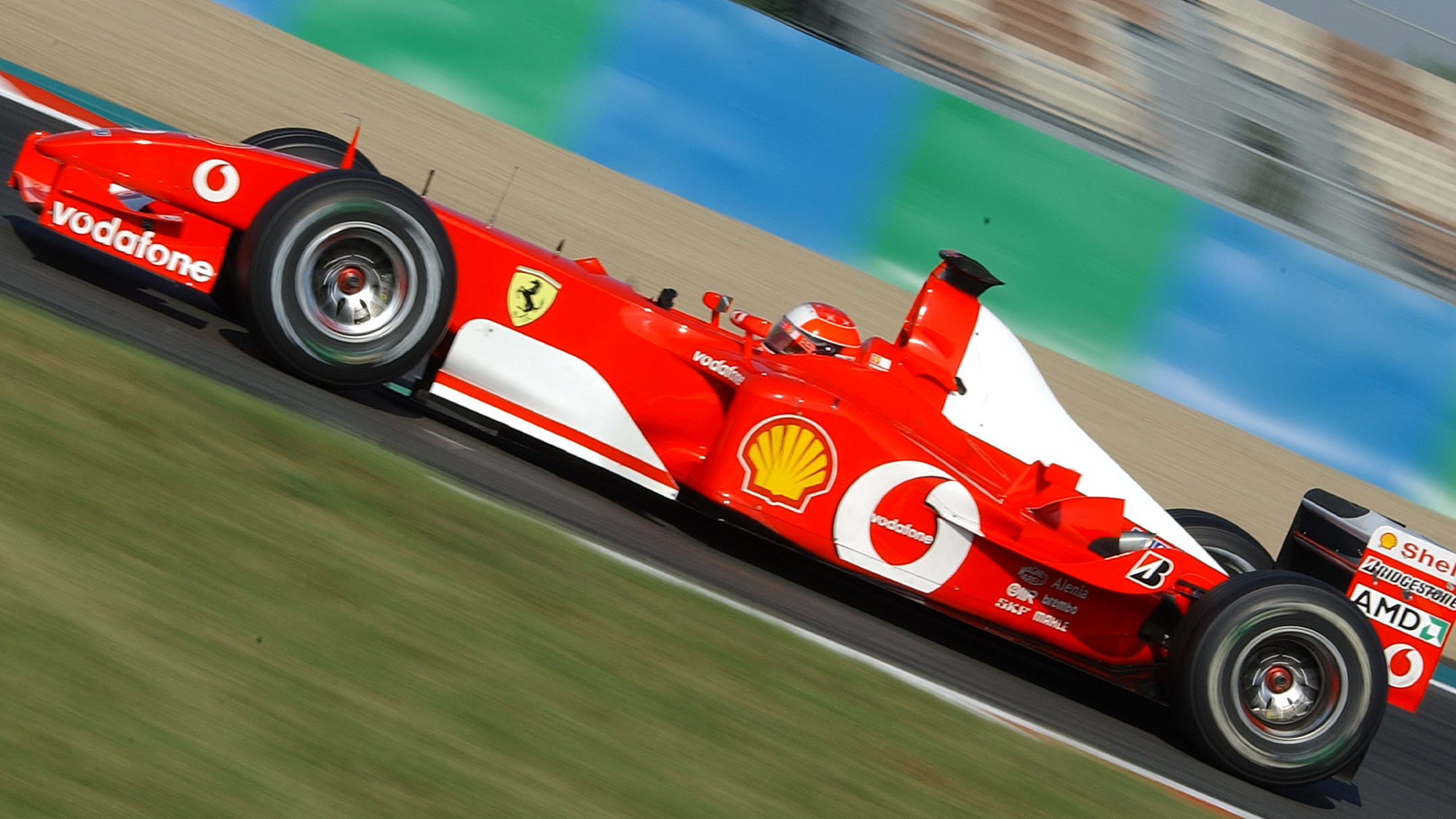 The F2002’s aggressive coke-bottle shape also allowed increased air-flow to be directed towards the diffuser and rear wing, helping the car to have a considerable advantage in terms of aerodynamic efficiency.

The new Tipo 51 3-litre V10 wasn’t bad either, producing 835bhp at a canter, which could be turned up to 900bhp in qualifying. Whilst perhaps not a match for Williams’ BMW power-unit in terms of sheer power, the drivability of the horses afforded, combined with the chassis, were still more than enough to see the Cavallino through.

“What makes it so special is that in every area we’ve been able to improve the car,” Schumacher commented on the F2002 in an interview with James Allen. “Although last year’s car was a very good car, we’ve gone a step further.”

What further helped was Ferrari’s increasing closeness to tyre supplier Bridgestone. With other top teams running Michelins, the Japanese companies focus was firmly on Ferrari, which suited them fine.

“We have Bridgestone on our side, which develop very well together with us, we have a lot of time [developing the tyre],” the German commented on the special relationship. “We have a special test car [which] does all the development with them. And all these [things] just work hand in hand is probably one reason of the success.” 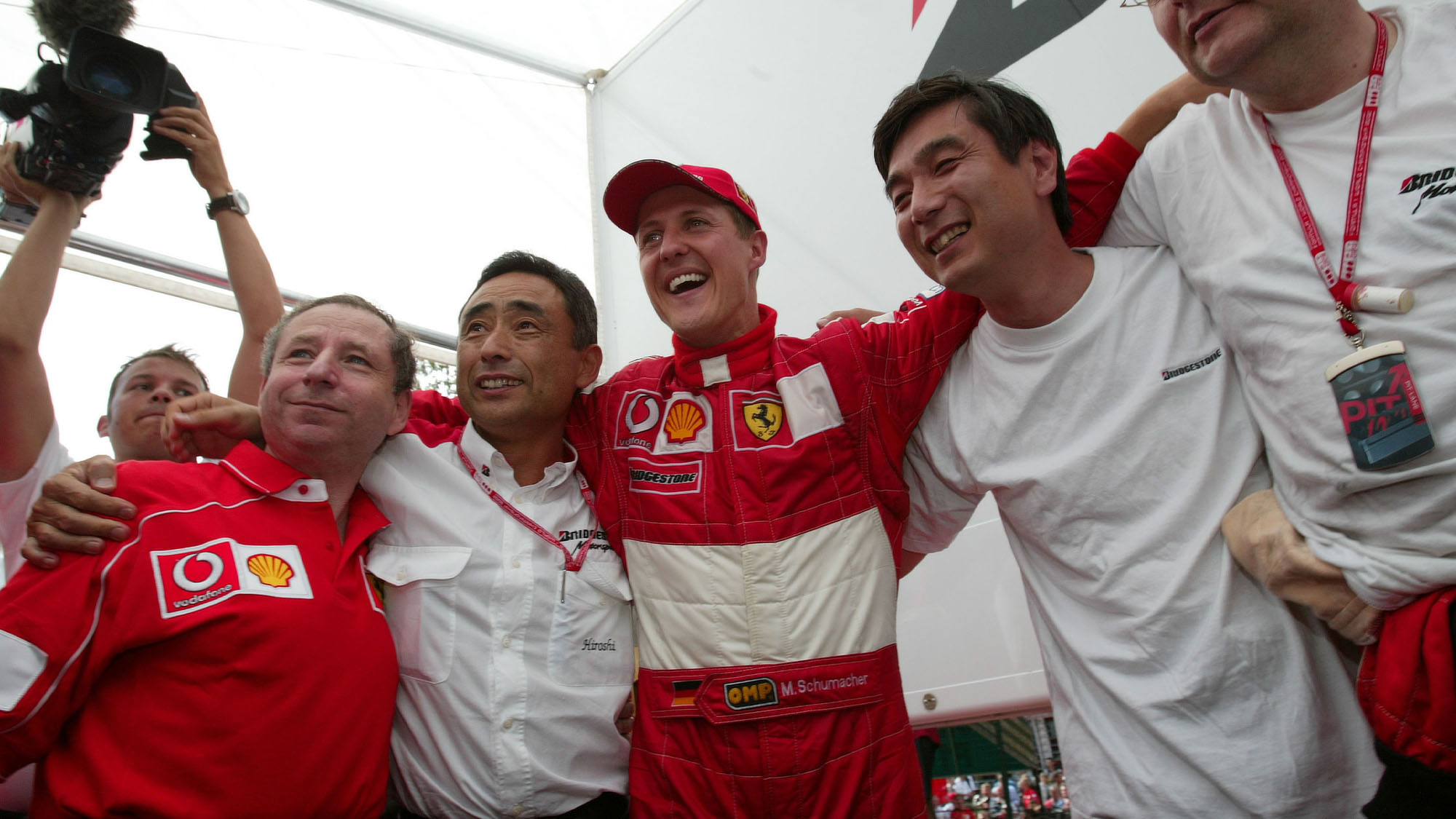 It was a flying start for the new Ferrari. Schumacher won right out of the box in the F2002’s first race at Interlagos, taking the win by half a second from the sibling Schumacher. Asked if he’d been under pressure, he said “It wasn’t that bad.”

Schumacher then claimed victory by 17sec from team-mate Rubens Barrichello at Imola. Then he won in Spain too.

Old or new car, it had all been relatively smooth running so far, but then came Austria.

Barrichello’s San Marino runner-up position had been his only points of the year so far, but he rallied in the Styrian mountains to dominate the Austrian GP weekend. He had pole, and the race should’ve been rightfully his, but Ferrari intervened and asked the Brazilian to move over and let Schumacher win. Barrichello at first refused, before the threat of punishment made him change his mind. The Brazilian slowed just before the finish line to let Schumacher win, to expressly make his point.

Team orders being enforced so early in the season caused uproar amongst fans, but as Ross Brawn succinctly put it in an interview at the time with Adam Cooper: “The situation today was that Michael had 44 points and Rubens had six. If they were both fighting for the championship on an equal points basis we wouldn’t have made the decision we made today.”

Not only by 2002 had Schumacher and car improved, but also the team’s tactical nous was now razor sharp too. Nothing was being left to chance.

“We sat there in Suzuka [‘98-‘99], we sat there in Jerez [‘97], and wondered what decisions we could have made during the year that could have avoided the situation we had then” Brawn added. 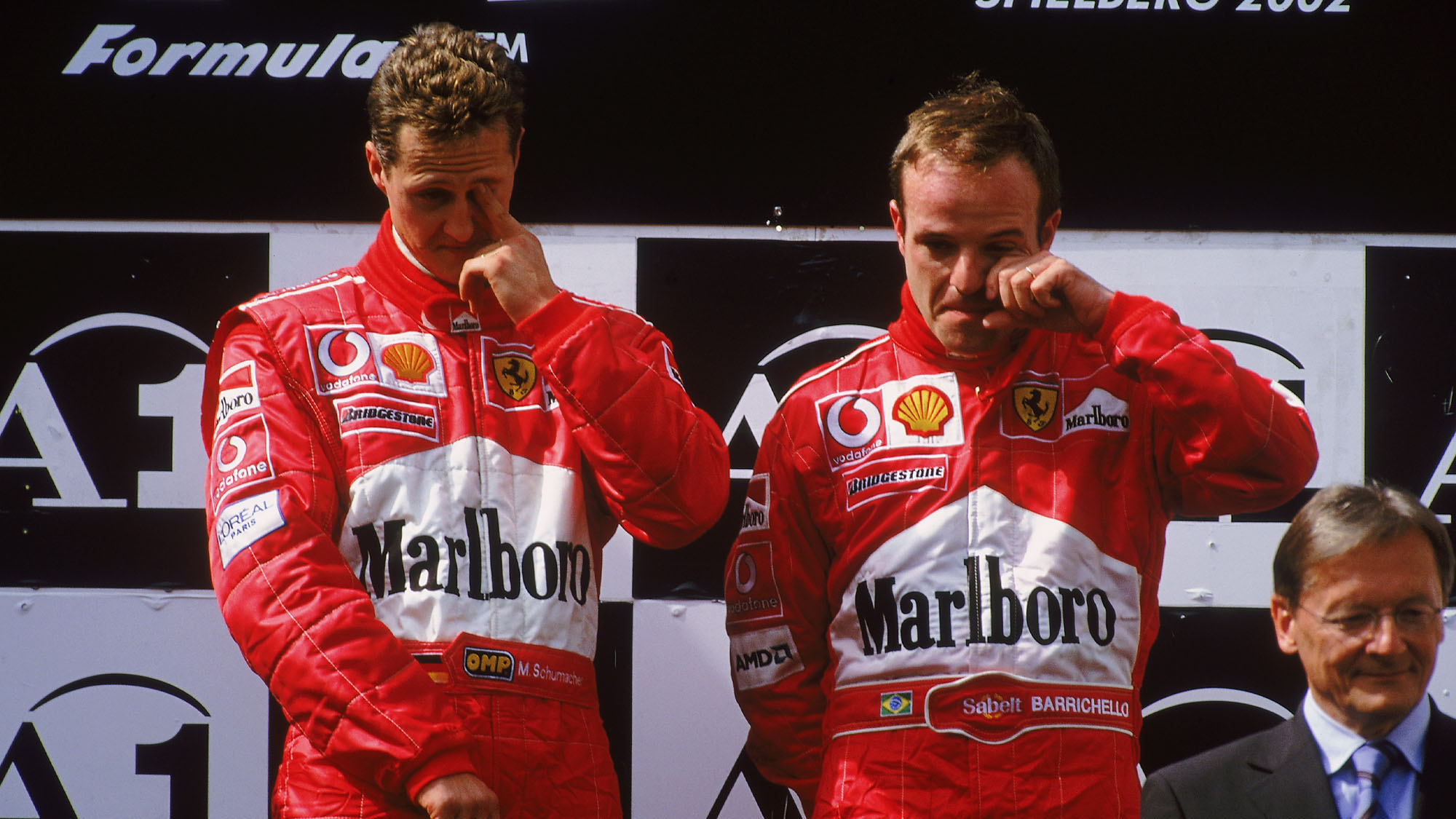 “Too many championships have been lost in the past when teams haven’t given that support to their driver. We don’t operate like that.”

Next race up in Monaco, Schumacher was only foiled due to a David Coulthard-shaped roadblock, McLaren’s sole win of the season, before the lead Ferrari man came home first again in Canada.

So rampant was Schumacher and the F2002’s progress that two races later the drivers’ championship – and a new record for the speed in which it has been won – was within his grasp at the French GP, round 11 of that season. It’s apt then that it may have been Schumacher’s most challenging race – and therefore greatest win – of that season.

Beaten off the line by Montoya then baulked by the Colombian at the hairpin on the first lap, the Ferrari had to wrestle second place back off Räikkönen to stay in contention. 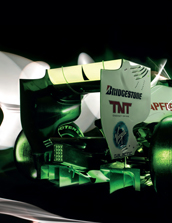 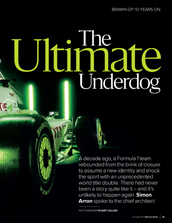 It’s always the same when a fresh group of Formula 1 regulations is implemented. Cars appear slightly odd when the first publicity shots appear, but after watching for a few…

The Ferrari driver then jumped the Williams at the first stops before the German committed a rare mistake and crossed the pit-lane exit line – cue a drive through penalty.

Dropping again to third, Schumacher once more got past Montoya at the stops before Räikkönen then slipped off at the hairpin on oil left by Allan McNish’s Toyota to relinquish first place and allow the Ferrari to romp home to the win and drivers’ championship – with a record six races still remaining of the season.

“I’ve never been good at these moments to find appropriate words,” a visibly moved Schumacher said after the race. “It just has overcome me. Suddenly when I was leading, and felt I was going to win the championship, that was the worst five laps I’ve had in my career. The outbreak I had was pretty heavy, and that’s when I realised how much pressure I was under.”

The German emphatically equalled Juan Manuel Fangio’s record of five crowns, and with more race wins (65) became the most successful F1 driver of all time up to that point.

Later on that season, so far ahead of rest were Ferrari, he could afford to repay Barrichello by letting him past to win the US GP in Indianapolis, braking so that the Brazilian won by barely half a brick. 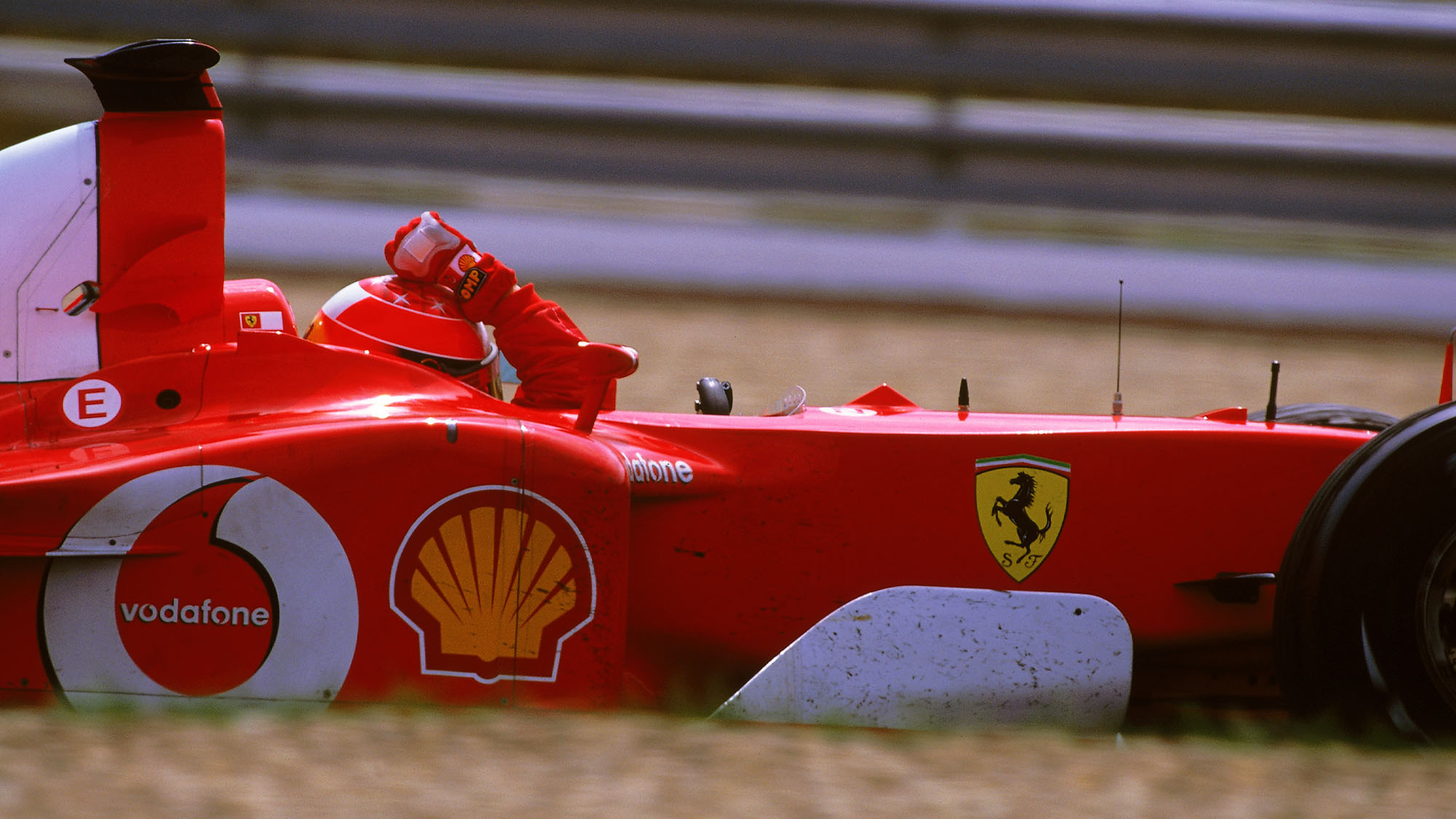 “In my heart I got even with what happened in Austria, I felt I had to do something,” he commented on that grand prix giveaway.

Quite simply, the overall performance of driver, team and car was stunning, as the German himself was ready to admit.

“No, clearly no,” was Schumacher’s answer on ITV when asked if the year could’ve been any better. “It has been a fantastic season with many achievements, with many good races, a lot of emotions, so it’s been a beautiful year.

“If you look at my emotions and the way I’ve been after the race [in France when he won the ’02 title], crossing the line, all those pictures explain far more than I could put into words.”

The recent introduction of sprint race qualifying has drawn comparisons with 2002 and attempts to spice up the action. So dominant were Ferrari driver and team that F1 felt pressured for 2003 to enter bring in an all-new qualifying format and points system in the hope of stopping the all-encompassing dominance of the champion package. Schumacher didn’t seem unduly worried come the season’s close.

“We have a saying in Germany,” he said when pressed on these changes aimed at stopping him and his Scuderia team. “You eat nothing as hot as you cook it. Let’s wait and see.”

As it turned out, not even the raft of new rule changes or coming man Kimi Räikkönen could stop the Schumacher-Ferrari axis. They won the titles in 2003 again anyway, with a whole lot more Il Canto degli Italiani from the podium.