Simon Arron recalls Rubens Barrichello’s win at the 2003 British Grand Prix, which was memorable for all the wrong reasons 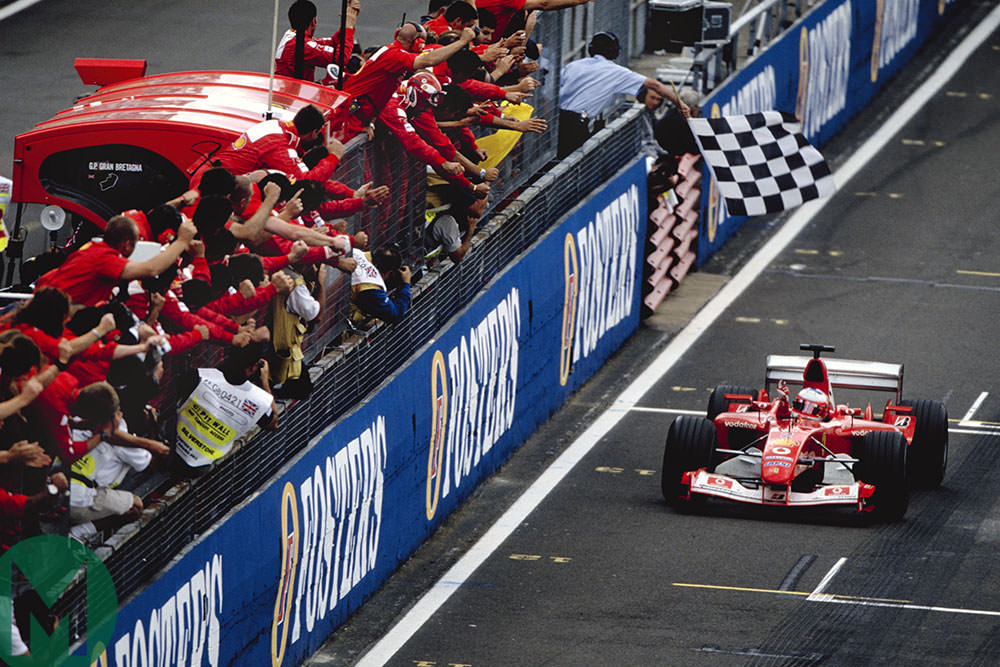 As a contest it was among the finest of the season – and perhaps the decade – yet it will ever be remembered for rather more than the spectacular manner of Rubens Barrichello’s victory. In simple terms the Brazilian qualified his Ferrari on pole and went on to win by 5.462sec, which sounds rather straightforward. The bits in between, though, were anything but…

The race began conventionally enough, Barrichello making an indifferent start – something that had troubled him since his F3 days – to run third, while his team-mate Michael Schumacher chopped Fernando Alonso’s Renault onto the Hangar Straight lawn at about 185mph and prompted the stewards to do absolutely nothing – something science remains powerless to explain.

With Jarno Trulli (Renault) leading Kimi Räikkönen (McLaren) and Barrichello, the order remained settled until the first of the day’s interruptions: somebody had failed to optimise one of the locking mechanisms on David Coulthard’s McLaren and his cockpit surround flew free, shattering on the track and triggering a safety car period to allow debris to be swept clear. Shortly after the restart, Barrichello executed one of the campaign’s finest moves by passing Räikkönen around the outside of Abbey: further progress appeared to be little more than a formality, but…

It is not unusual for Formula 1 spectators to wear garish colours, but that is usually a consequence of buying team clothing from the official merchandising stalls. In this instance, the cameras suddenly trained on a middle-aged man wearing a green and white top, kilt and lurid green socks – nothing that matched any competing team of the period. It was serial trouble-maker Cornelius Horan, who, on lap 12, scaled the safety fencing and ran onto the track carrying a banner: “Read the bible, it’s always right.” He might have been better advised to read a detail on his entry ticket, the one pointing out that motor racing can be dangerous.

Mark Webber was the first driver to witness this unexpected turn of events. “As I came onto the Hangar Straight,” the Jaguar star said, “I saw what I thought was a piece of bodywork on the track. One second later I decided it wasn’t a bit of car and a second after that I realised it was a person.

“I simply couldn’t believe what I was seeing. I wasn’t particularly worried about what might happen to the idiot on the track. I was more concerned about other drivers and the effect on any kids watching if a car did hit him. That was absolutely my first thought. It’s the kind of incident you don’t forget.”

Webber managed to avoid him – and the only impact Horan felt was that of a rugby tackle from marshal Stephen Green, who then quite literally dragged him from the asphalt and bundled him back over the sleepers. The safety car was deployed, while Horan was carted off to the police cells and later served two months for aggravated trespass. This seemed not to be a huge deterrent.

He was arrested at the 2004 Epsom Derby, when police felt (not without reason) that he was about to stage a course invasion. Later that summer, in Athens, he barged Olympic marathon leader Vanderlei de Lima off course. The Brazilian struggled free and resumed the race, but lost a significant chunk of what had been a comfortable advantage and eventually finished third. The Greek authorities fined his assailant, but handed out only a suspended jail term. Horan had been an ordained priest, but was defrocked in 2005. He was also subsequently arrested in Germany, before he had an opportunity to disrupt the 2006 FIFA World Cup, and the following year was handed a restraining order that forbade him going anywhere near the London Marathon route.

Back at Silverstone, meanwhile, most drivers headed for the pits.

Running out of sequence after an earlier stop, Toyota duo Cristiano da Matta and Olivier Panis stayed out and rose to the head of the field, while Barrichello lost time during his stop and slumped to eighth. It was the catalyst for a spectacular recovery drive, the final act of which involved passing Räikkönen for the lead on lap 42.

“Silverstone has always held a special place in my heart,” he said, “and that 2003 win remains one of my career highlights.”

Sadly, most people remember it less for the Brazilian’s cavalier performance than they do for Horan’s folly. His intent, it seemed, was to alert the wider world to his belief that the end of the world was nigh – which might indeed have been true in his case, were it not for Green’s prompt intervention.

It wasn’t the first time F1 had been similarly affected. During the 2000 German GP at Hockenheim, the safety car was called to allow Robert Sehli to be removed from the track after a one-man protest against his former employer Mercedes-Benz.

Barrichello won that one, too, to tee up one of the most unusual doubles within the annals of motor sport.