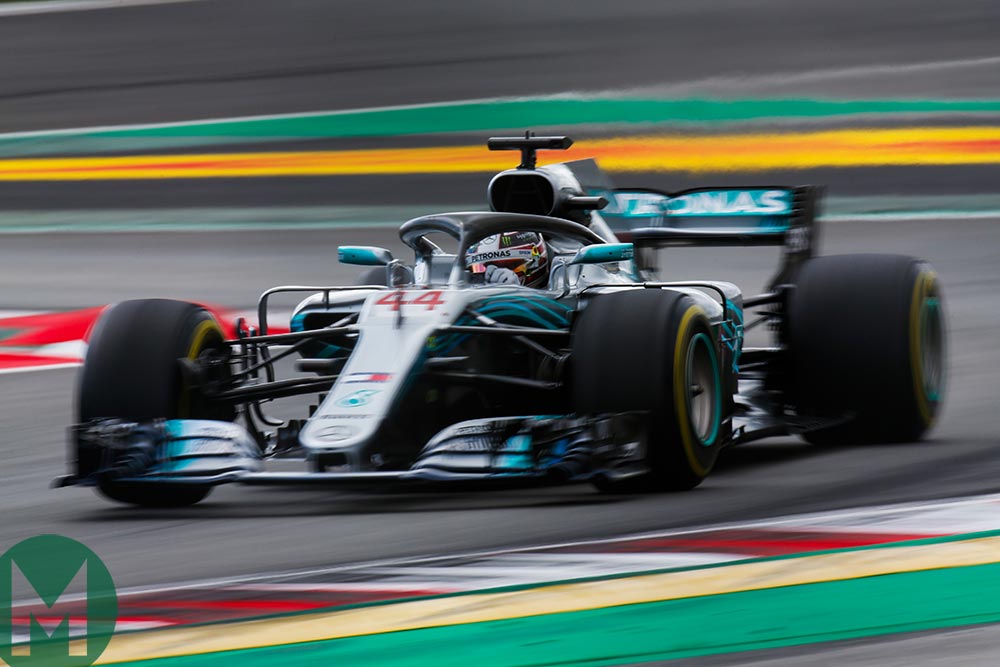 Hamilton pulled away from the start, but the safety car was quickly deployed on lap one after Romain Grosjean’s Turn 3 spin, which collected Nico Hülkenberg and Pierre Gasly in a cloud of smoke and debris as the trio retired.

The polesitter slowed down the pack under the safety car and pulled away as the field struggled on cold tyres.

Vettel pitted for mediums on lap 18 and Bottas followed suit, but a slow pitstop put him behind Vettel.

Kimi Räikkönen retired from second place on lap 25, and gave way to the chasing Red Bulls. Hamilton pitted shortly after Räikkönen’s retirement and emerged behind new leader Verstappen, who was on a long-run on soft tyres.

The Red Bull pair pulled in for mediums on lap 35, giving Hamilton back his lead.

However, a virtual safety car was triggered by Esteban Ocon’s Force India, which stopped billowing smoke on lap 41. Vettel responded by pitting for new tyres but the Mercedes pair stayed out, leaving Vettel in fourth behind Verstappen and Bottas.

Although Verstappen picked up damage on the VSC restart by clipping Lance Stroll’s Williams, he continued in third with Vettel trying his best to reduce the gap between them, but the Ferrari couldn’t make its way past, finishing under a second behind the Red Bull.

Daniel Ricciardo was the last driver on the lead lap in fifth place ahead of Haas’ Kevin Magnussen, who was largely unchallenged in sixth.

Carlos Sainz was briefly stuck behind the Sauber of Charles Leclerc, but eventually made his way past to finish seventh.

Fellow Spaniard Fernando Alonso had a much harder job of overtaking Leclerc (for eighth) but finally broke the rookie’s dogged defence on the VSC restart, sweeping by through Turn 1.

Alonso caught up with Sainz, but with one lap remaining he couldn’t overtake the Renault, which, as a result, takes fourth in the constructors’ championship ahead of McLaren.

Lance Stroll finished 11th and his Williams team-mate Sergey Sirotkin finished 14th and last after spinning on the VSC restart under acceleration.

Brendon Hartley’s Toro Rosso limped over the line with an issue but he was classified 12th, ahead of Marcus Ericsson.

Stoffel Vandoorne was the last of the retirees as he pulled over on lap 48 with a loss of drive.

For full analysis of the Spanish Grand Prix, stay tuned and sign up for the Mark Hughes newsletter to receive the in-depth Grand Prix report to your inbox soon.