Charles Leclerc has a great opportunity to win from pole after qualifying for the 2019 Austrian Grand Prix. But the race is anyone’s, writes Tony Dodgins 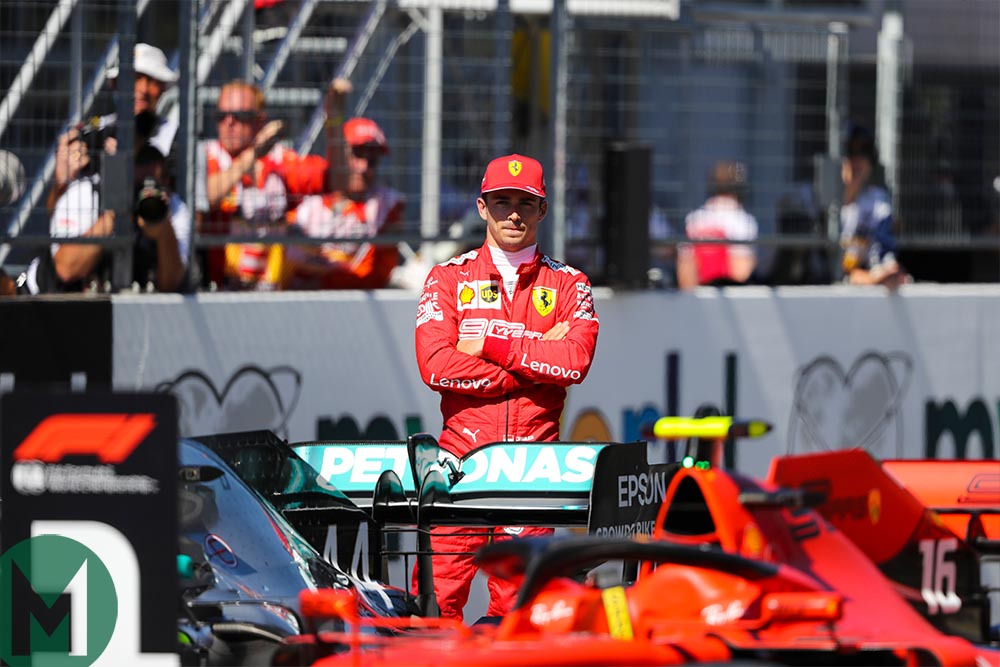 When the paddock reassembled in Austria a few days after the French GP, the big topic was still Lewis Hamilton’s Mercedes superiority at Ricard.

On paper, the Red Bull Ring is very different. With three significant straights and not many longer duration turns, this was more like Montreal, where Ferrari took pole. But when the last lap of Hamilton’s French GP, on used hard compound Pirellis, was just a couple of hundredths slower than Sebastian Vettel’s on a new set of softs taken for the sole purpose of securing the fastest lap point, you could hear jaws hitting the floor. He was taking the pee.

Lewis was still smiling about it four days later.

“Something I really like is how I can work with engineers and designers, all amazingly bright guys from places like Oxford, Cambridge and Harvard. They have all their data but it’s me in the car. It’s neat, sometimes, when I can prove them wrong. Like at the last race: they didn’t know the tyres would go as far as they did. Or that I could do that lap time at the end! That’s not what their data said.”

So, what was the delta between his last Ricard lap and the data expectation?

Cue even bigger grin. “About a second… The team gets petrified that I’m going to make a mistake in a situation like that, but they should know me better!”

Up against that, even if we’d been at Santa Pod, it was understandable for Charles Leclerc to be guarded about his pole chances. He thought that the Mercedes would still be quickest but that Ferrari would be closer than Ricard. So, he was absolutely delighted to trip the timing beam at 1min 03.003sec versus Hamilton’s 1min 03.262sec to claim his second pole of the season.

A few weeks ago Leclerc was not happy with his qualifying performance and has improved things by working hard on predicting track evolution and taking a set-up direction that accepts compromises in Q1, where there is ample margin anyway, in order to have a car better suited to Q3. It paid dividends in France and even more so in Austria, allowing him to properly execute a scenario that had seen him have the measure of Vettel all weekend and to top FP2/FP3/Q2. 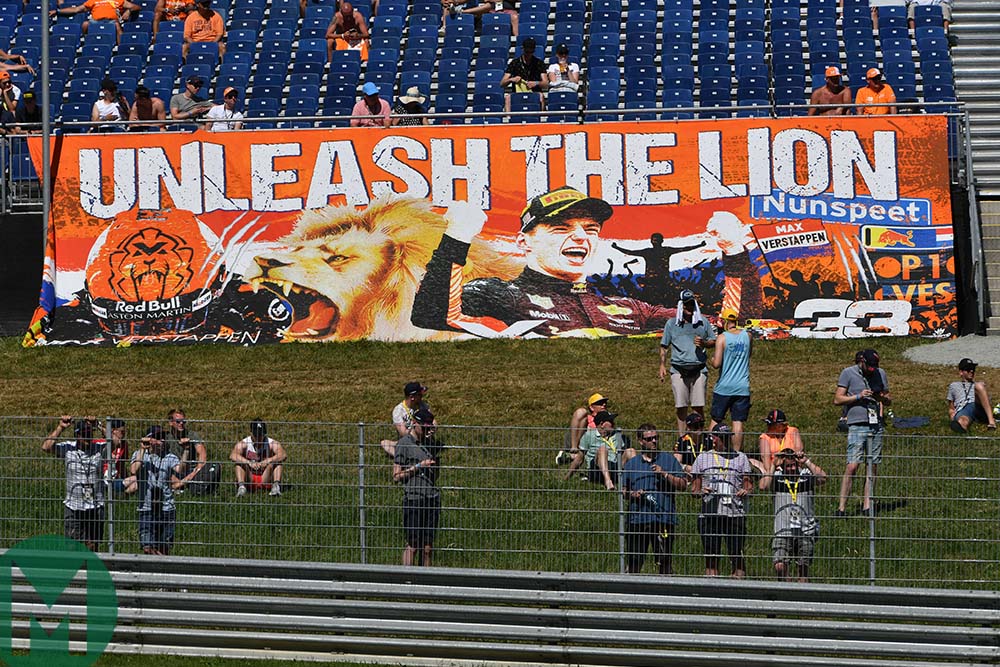 Way better than that, though, was sector bests in all portions of the lap. A 0.12sec advantage over Hamilton in sector one (all straights bar Turn One) was to be expected, but 0.14sec in sector two (which includes the quick, long left-handed Turn Six) and 0.04sec in sector three (Turns 7/8, Nine and Ten), was not. Where had that come from?

“The main issue has been not having enough front end and this week it’s quite a bit better,” Leclerc explained. “We took a different set-up philosophy that’s working well here but won’t necessarily at every track.” So, calm yourselves, Ferrari faithful!

Vettel was the best part of three tenths behind his team-mate in Q2 but the evidence suggests that he would have been battling for a front row slot had he not been confined to the garage in Q3 by a problem with an air pressure line to the engine. He will start ninth and, given the Ferrari’s straightline speed, could still be a podium contender.

If Maranello had been a bit coy over its pole expectations, Merc’s engineering chief Andrew Shovlin was not surprised: “We don’t seem to be as competitive here as in France; we’re missing the kind of cornering sequences that the car likes.”

Adding to Hamilton’s problems is a grid penalty for impeding Kimi Räikkönen at Turn 3 in Q1. Lewis spotted Antonio Giovinazzi’s Alfa Romeo approaching but by the time he saw Raikkonen, his best effort at running straight off on the outside of the turn were too late to avoid a disparaging hand gesture from the Finn, and the attention of the stewards. Despite receiving a three-place penalty, he will start fourth, thanks to penalties applied elsewhere on the grid.

Lewis’s demotion promoted Max Verstappen to the front row in front of noisy, fevered Dutch support at Red Bull’s home grand prix. Last year’s winner, Verstappen qualified just 0.17sec behind Hamilton and will also be a threat in the race. 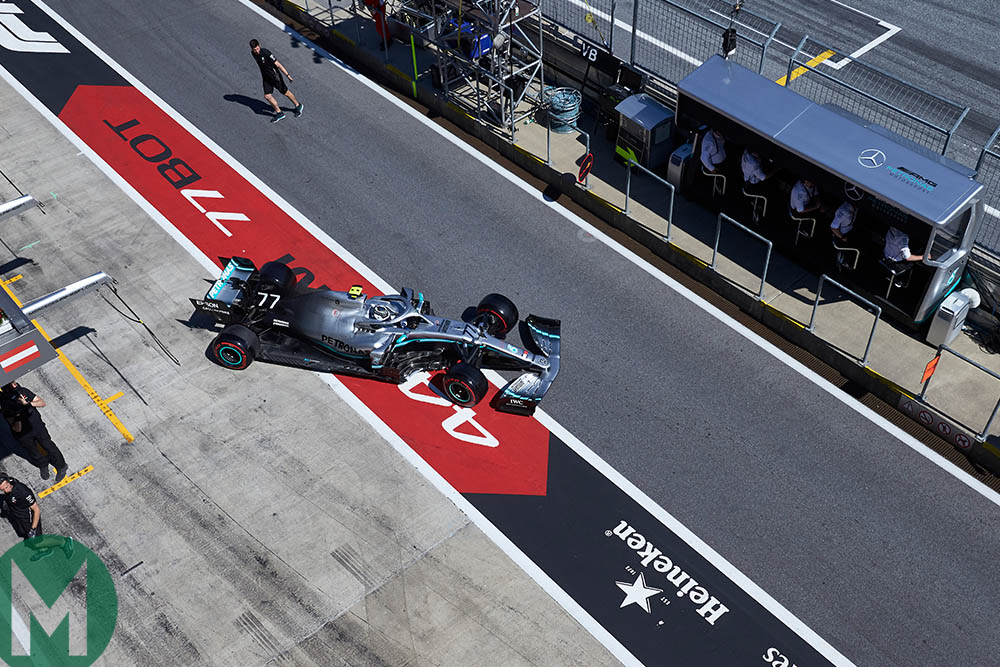 A tenth slower, Valtteri Bottas labelled qualifying “sub-optimal.” As everyone jostled for position and attempted to pick up a tow from the car in front, Leclerc passed the Mercedes, which had been behind Verstappen’s Red Bull.

“There was a bit of a communication issue,” Bottas said, “I got told there was no time and I was way too close to Leclerc to improve. It turned out that I had some margin, so could have used that.” It may have been enough to get him ahead of Verstappen on the grid but Leclerc’s time was out of reach.

Haas has always gone well at Red Bull Ring but such is the confusion over overheating tyre surface temperature in association with core temperatures that are too cold, that any request for weekend predictions were met with a smile and a shrug.

Happily though, the car/track empathy was still in evidence and Kevin Magnussen pulled out a stupendous lap to qualify fifth, just over half a second behind a Mercedes! Annoyingly for the Dane, a gearbox change between FP3 and qualifying, assisted well by Romain Grosjean’s half of the garage, sentenced him to a five-place grid drop. Grosjean only just failed to get the second car into Q3, lapping 0.03sec adrift of his team-mate in Q2.

Only a couple of hundredths slower than Magnussen, sixth quickest, was the impressive Lando Norris, who will start fifth after grid drops are applied to Hamilton and Magnussen.

These are exciting times for McLaren. Carlos Sainz was always going to start at the back due to taking a fourth power unit in Austria, and hence hadn’t been bothering too much about optimising the car over a single lap. And yet, when he tried a single push lap in FP2, he ended up fifth overall. Which only added to his frustration. 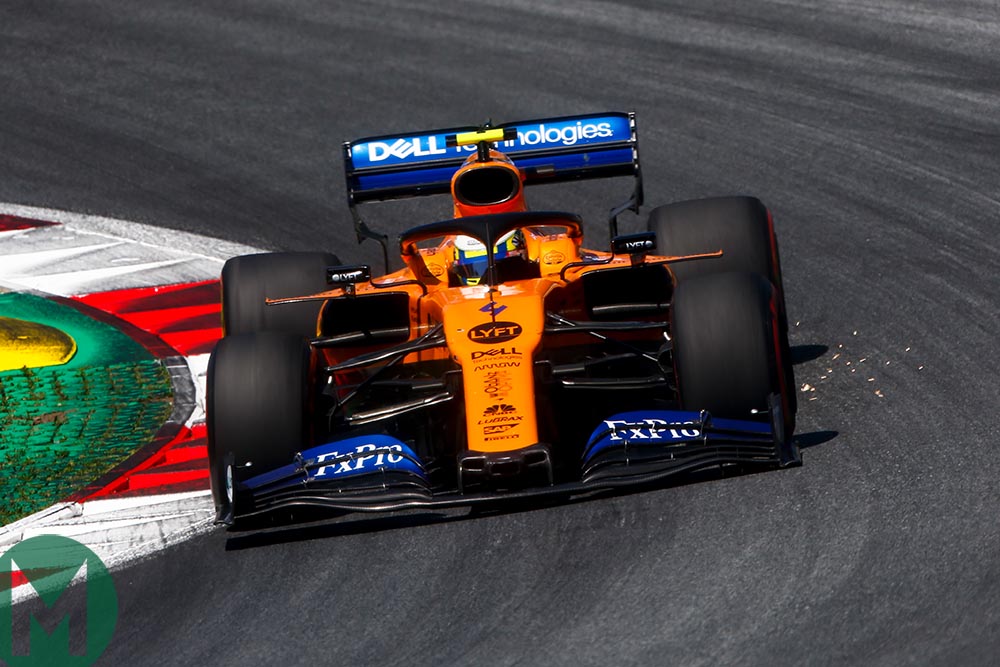 Driver, through no fault of his own, has weekend ruined. It’s hardly a new sermon, but the day is long overdue that F1 finds a sensible way to divorce reliability issues – whether engines or gearboxes — from driver penalties. Fine teams or take away constructors’ points all you like, but why spoil the show and upset the fan base?

When you look at the prevalence of Ferrari grunt in the Austrian top 10, this was a fine effort by McLaren. Encouragingly for the team, the MCL34 is performing consistently well on different types of track and there is a real sense of spirit at Woking. The drivers, despite being well-matched, even genuinely seem to like each other!

Räikkönen and Giovinazzi took advantage of an improving chassis and its stonking Ferrari power unit to qualify both cars in the top 10, split by just a hundredth of a second. Had Räikkönen been able to repeat his Q2 time, he’d have split Bottas and Magnussen.

Pierre Gasly also lapped quicker in Q2. More comfortable in the Red Bull than he’d been in his home race at Ricard, he was just 0.15sec shy of Verstappen in Q2 but a relatively conservative banker first Q3 run was not improved upon when he ran wide at Turn One on his second attempt.

The race prospects are genuinely fascinating. There is every chance that Ferrari, Mercedes and Red Bull will be closely matched for race pace. Add to that strategic variation: Leclerc will start on soft compound Pirellis, while Verstappen and the two Mercedes will start on the medium tyre.

Had this been Ricard, that would have taken Leclerc out of the equation. Here though, not so. Ferrari ran the medium in Q2 before electing to set their times on the soft. Not because they needed the pace, but because Leclerc’s long run had suggested that they could get a decent stint length out of it at a sensible pace. The Mercedes, though, should be able to run longer.

A scorching track temperature will mean that all compounds will need managing. And, has anyone gambled a little with engine cooling? Think Sochi 2017. Close the car up a bit and you might find a tenth per lap which, over a race, will give you more than 5sec. If you were confident of pole, you might have done that. But if you then unexpectedly have to run in dirty air, engine temperatures can be marginal.

Then there are race set-ups. On Friday afternoon we saw Verstappen and Vettel (both Turn 10) and Bottas (Turn Six) all lose their cars to sudden snap oversteer. In race trim a bit more front wing looks after the front tyres but makes you more vulnerable to the sort of snaps we saw, especially in conjunction with any gusty tail winds. All of it needs to be factored. Advantage Ferrari maybe, but Austria really is anyone’s.