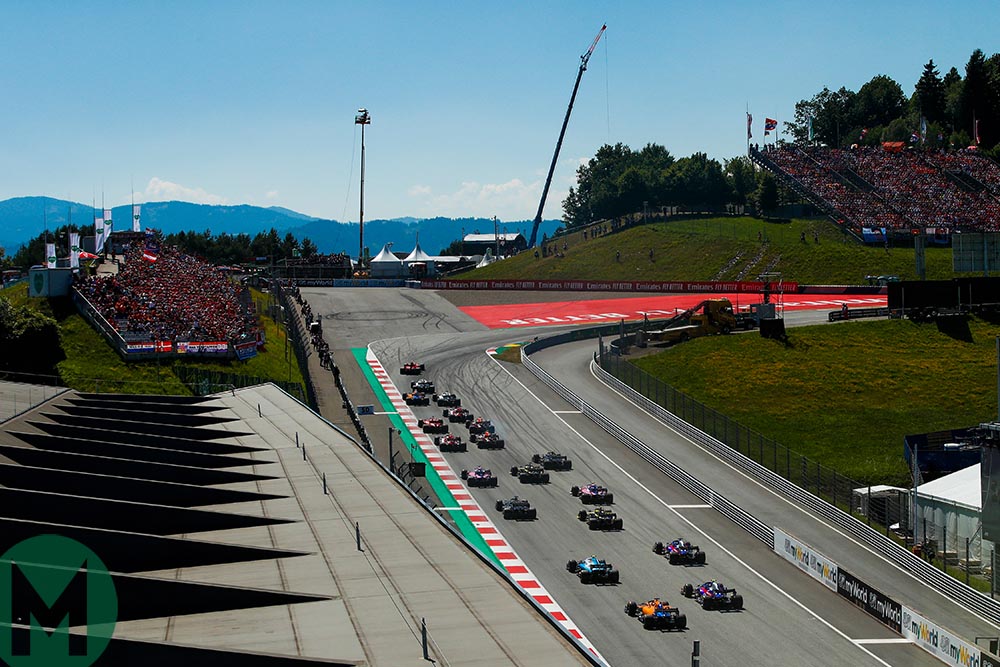 The lights go out at the start of the Austrian Grand Prix Photo: Motorsport Images

Max Verstappen fought back from a disastrous start to win at the Austrian Grand Prix, taking first place from Charles Leclerc with two laps to go, after a nail-biting battle.

The pair made contact, pushing Leclerc off the track so, despite receiving the winner’s trophy on the top step of the podium, Verstappen had a three-hour wait to see whether a steward’s inquiry would impose a penalty. In the end, no further action was taken.

It came as a relief to Verstappen’s “orange army” of supporters who had been cheering a victory that looked unlikely at the start, when Verstappen’s anti-stall system kicked in, as he started from second place behind Leclerc.

His Red Bull was rapidly swamped, being overtaken by both Mercedes, as well as Sebastian Vettel, Kimi Räikkönen and Lando Norris.

Mercedes was off the pace, however, and Verstappen had the edge on the Ferraris, as well as fresher tyres after a late pit stop. It paved the way for a commanding comeback, where he overtook Vettel, Bottas and then Leclerc on track in the final 20 laps. The victory was the first for Red Bull’s engine supplier, Honda, since 2006.

The result lifts Verstappen to third place in the drivers’ championship with 126 points, ahead of 123 for Vettel. Hamilton remains ahead, with 197 points, followed by Bottas with 166.

McLaren again put on a strong performance to finish as best of the rest, with Norris sixth and Carlos Sainz eighth, followed by the Alfa Romeos of Räikkönen and Antonio Giovinazzi.