Charles Leclerc is on pole for the 2019 Italian Grand Prix, but the qualifying session will go down in history for the bizarre final two minutes 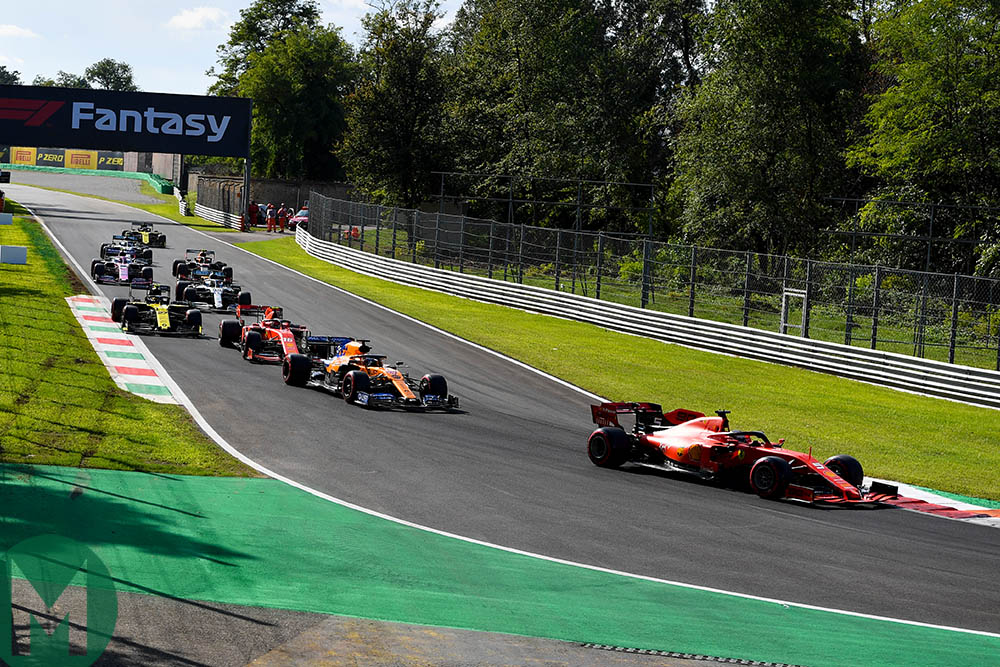 Everybody wanted a tow, so nobody got a tow Photo: Motorsport Images

Lewis Hamilton loves Monza: “It’s incredibly special – the fastest, the lowest downforce and drag and a real racer’s circuit. A bit like a go-kart track where you bounce the car off kerbs, there’s no real high downforce corners and you can follow closer. Then there’s the history and atmosphere.”

But given Ferrari’s current straightline speed advantage, did Hamilton think that with a tow he might be in the pole fight?

The answer was immediate: “EVERYONE will go for the tow here. You saw it last year. And this year the effect is even bigger.” Half a second to seven-tenths if you got it spot-on, said the engineers, but that’s easier said than done…

This was Thursday, before a wheel had turned, and Lewis’s words proved amazingly prescient. But even he wouldn’t have predicted the comedy scenario we witnessed in Q3 when they messed each other around so much that only Carlos Sainz got across the start/finish line in time to complete his second run.

The situation at the end of the first Q3 runs could not have been tighter. Fresh from his win at Spa, Charles Leclerc had headed to Milan for Ferrari’s 90th birthday celebrations and been totally wowed by the scale of his reception.

“I felt like a rock star for a couple of hours!” said the man whose mature, compartmentalised approach to his job prompted former Ferrari chief Luca di Montezemelo to liken him to a young Niki Lauda. 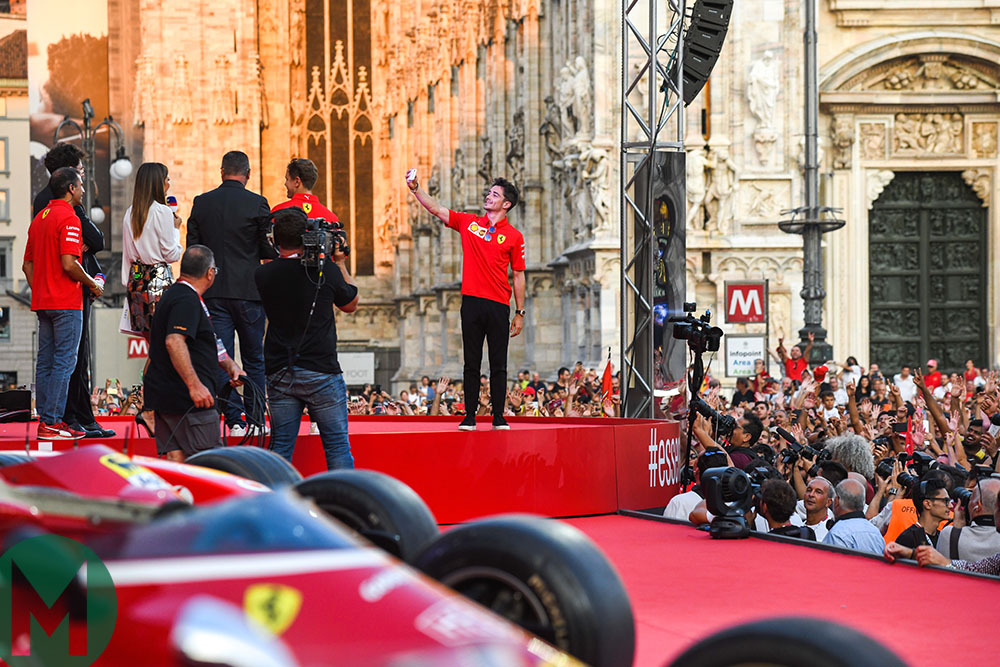 Leclerc feted in Milan ahead of the race weekend Photo: Motorsport Images

At Monza for the first time in a Ferrari, Leclerc was out for his fourth pole of 2019, equalling the tally of Hamilton and Valtteri Bottas. After the first Q3 run he was top of the pile on 1:19.307. Hamilton broke the timing beam in 1:19.346 and Bottas in 1:19.354. Vettel, outqualified by Leclerc for the past six races but always quick at Monza, scene of his first win in a Toro Rosso 11 years ago, was on 1min 19.457sec.

But there was considerable doubt about the validity of Vettel’s lap. Saturday morning’s F3 race had witnessed a nasty shunt to Australian Alex Peroni, who thankfully emerged unscathed. A sausage kerb on the outside of Parabolica, there to stop drivers deliberately running wide on exit and getting higher speed down the following straight, launched Peroni into a series of barrel rolls that brought him down cockpit-first on top of the barrier and thence into the debris fence. He was undoubtedly saved by the car’s ‘halo.’

It was a prima facie case of an unintended safety consequence brought about by an attempt to solve the track limits conundrum that has become such an issue. Frankly, a moat with some attendant frog men would be a safer bet…

The FIA reacted quickly, removed the kerb and announced that anyone putting all four wheels over the white line on the exit of Parabolica would not just have that lap scratched, but also the following one, which made complete sense.

Now, it wouldn’t be wise to accuse Derek Warwick of wimping out of anything, even if your name was Floyd Mayweather or Manny Pacquiao… But, there was a long silence from the race stewards (Warwick, Silvia Bellot, Paulo Longoni and Garry Connelly) when still shots showed Vettel bang to rights.

There used to be a time when the Italian GP started when the Ferraris went and it was suggested that penalising Vettel here would have been like a Mancunian referee awarding a last-minute penalty against Liverpool at Anfield.

“If they can’t see that then they need one of those SpecSavers two-for-one vouchers…” said a paddock wag.

Half a second adrift, fifth and sixth, were the Renaults of Daniel Ricciardo and Nico Hülkenberg, the Renault once again proving competitive in low downforce configuration, both drivers happy with the baseline balance.

At Red Bull it was Max Verstappen’s turn to suffer a daft engine penalty and start from the back, with Alex Albon getting his first chance to have a proper run at qualifying since his promotion to the senior team.

Although many had been impressed by Albon’s drive to fifth from the back at Spa, Daniil Kvyat was not among them. With a wry smile and a denial that his grapes had turned sour, the Russian said: “I don’t know why it’s such a good start because he spent 36 laps behind me, in a Red Bull…”

At Monza though, Albon was certainly impressive on the opening day. The three big stops into Monza’s chicanes in unique low downforce trim, with rear-end skittishness caused by lack of downforce, demands feel and commitment. That’s all aided by experience, which Albon was obviously lacking, so to end up within a quarter of a second of Max Verstappen was a great effort. Sixth in Q2, he lost his first Q3 run when Kimi Räikkönen spun at Parabolica and brought out the red flag. The others without a time on the board when Raikkonen lost it, were Carlos Sainz and Lance Stroll. 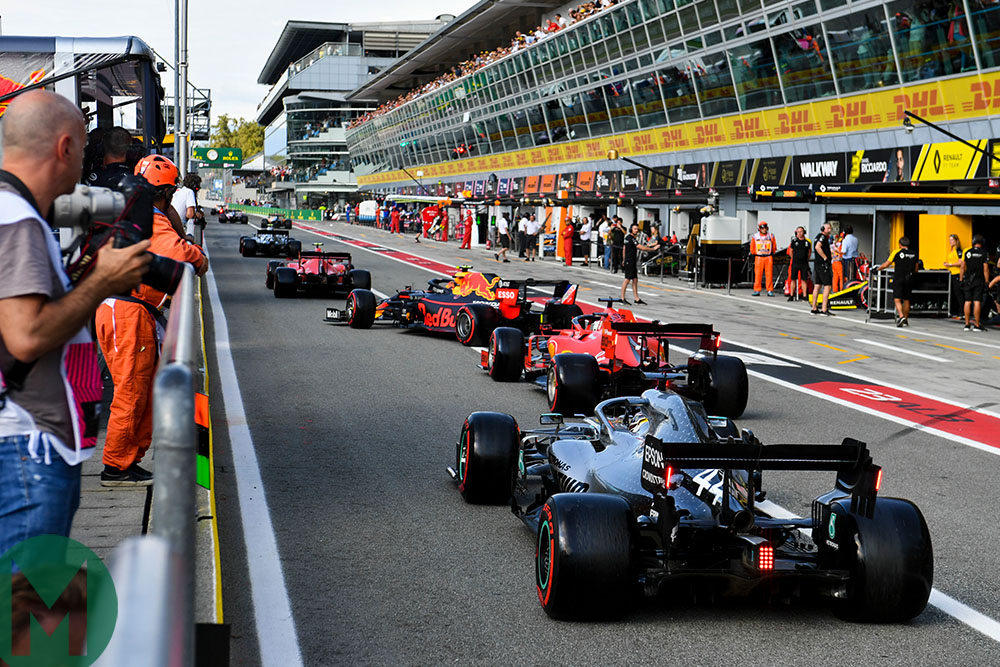 As the clock ticked down on Q3, nobody wanted to be the man without a tow, at the head of the pack. They all watched each other and nobody made a move. Ultimately, Hülkenberg’s Renault and Stroll’s Racing Point were the first to emerge, with Hülkenberg promptly missing out the chicane and heading down the escape road. He took his time about negotiating it. Noting that and not wanting to pass the Renault, Stroll backed off as he came through the first chicane, backing up Sainz, the Ferraris, the Mercedes, et al.

Sainz then came alongside Stroll and they formed a kind of road block as everyone jockeyed and dawdled and it immediately became apparent that not everyone was going to make it across the line in time to get their laps in.

Throughout qualifying we’d seen a selection of the world’s best drivers feigning an inability to hit their braking points into the first chicane so as to avoid providing tows but, as Sainz pointed out, all they succeeded in doing was getting their tyres dirty while the guys behind slowed down anyway. The FIA had already apparently said that it would be difficult to penalise drivers because there was no direct rule about it.

Sainz ended up being the only driver crossing the line in time to get his lap in, promoting himself to seventh in the process. In anticipation of the problem, the FIA had imposed a minimum out-lap speed of 1min 45sec, and nobody had broken that rule, which rather suggested that it needed to be faster.

“I’m not sure if I was smart or the only one not stupid!” Sainz said. “When the team told me the lap delta was down to 5-10sec, I started to go. I knew that I would be the only one across the line and that Albon and Stroll had not set a lap.”

Ferrari team principal Mattia Binotto had been on the blower to his drivers advising them to get a move on. Hamilton, further back, presumed that it was Ferrari, on provisional pole, who had deliberately timed everyone out, until Leclerc put him right on that.

Lewis Hamilton and Valtteri Bottas at the official photoshoot for the top three drivers after qualifying for the 2019 Italian Grand Prix” src=”https://motorsport-magazine.s3.eu-west-1.amazonaws.com/wp-content/uploads/2019/09/05033703/lewis_hamilton_and_valtteri_bottas_either_side_of_charles_leclerc.jpg” style=”width: 100%;” />

Hamilton and Bottas satisfied with their positions Photo: Motorsport Images

Lewis though, was not that upset: “The out lap is risky business and it was crazy but you kind of enjoy it at the same time. We’re on the front row, have split the Ferraris and so we should be able to race them.”

Hamilton may also think that he can make the difference in the race, as he did last year at Monza when he beat Räikkönen in a faster Ferrari. Particularly as the Mercedes’ and Ferrari’s pace is closer than in 2018.

Toto Wolff was more outspoken: “Have you ever seen anything like it? Everyone looked like idiots. That was not worthy of the junior formulae never mind F1.”

Stroll, whose ninth place was his best qualifying slot of the season, admitted: “Yeah, it was a bit of a comedy show. Nico (Hulkenberg) was playing games in the escape road but I wasn’t buying it.”

The upshot was that, Sainz apart, nothing changed from the first run, robbing the spectators of a much-anticipated final shoot-out. But we were in Italy, Ferrari was on pole, and so their devastation was containable.

With Alex Albon set to start eighth, Cristian Horner was less than impressed. “The Renault caused all the issues,” he said. “It ends up a cluster …. scenario. If there’s a positive, Alex’s theoretical lap speed would have put him P5, possibly P4, and we’ve got a decent race car.” 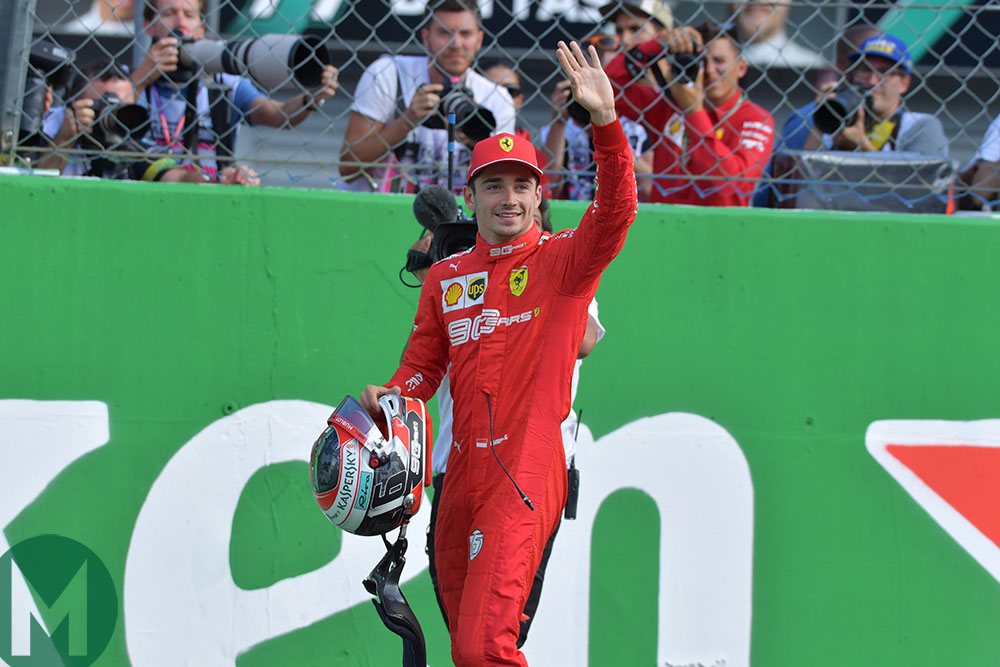 Crowd-pleasing pole-sitter made up for the Q3 debacle Photo: Motorsport Images

After some considerable time, the summonses began: Hülkenberg, Sainz and Stroll were reprimanded for driving unnecessarily slowly, avoiding any grid penalties. Hulk was also investigated for deliberately leaving the track without a justifiable reason.

He got away with that, the explanation comedy gold itself: “The driver stated that he was focussing his attention on the cars that were behind him and that he left it too late to turn the corner so he went straight ahead into the chicane. The stewards noted that he entered the corner at the same speed as he did on his previous fast lap (presumably, here, they mean ‘out’ lap). He was also in 3rd gear instead of 2nd gear which he used on his previous out lap.

“The Stewards note that the regulation refers to “deliberately” leaving the track and in this case we are unable to determine that the driver deliberately left the track.

This is a grand prix driver we’re talking about. As a press room colleague said, he might as well have said he’d suddenly remembered he’d left the oven on and went down the escape road to phone home…

When you’ve been around this business a while you think you’ve seen most things, but F1 always manages to surprise you!

These results do not show the effect of grid penalties

*Back of grid start due to power unit changes