Formula 1’s visit to the Algarve International Circuit for a race might prove to be a one-off, but thanks to Lewis Hamilton the venue will have a place in the record books for a long time to come.

It didn’t look that way for long spells of the weekend, as Valtteri Bottas held the upper hand until the moment it really mattered, when Hamilton took pole position. That had the potential to be a race-defining moment given the big difference in grip between the clean side of the grid – where pole position was – and the dirty side.

When Hamilton led into Turn One and Bottas was fighting off Sergio Perez having already lost out to Max Verstappen, that only seemed more likely, but we were all underestimating the lack of grip that would be available on the opening lap. 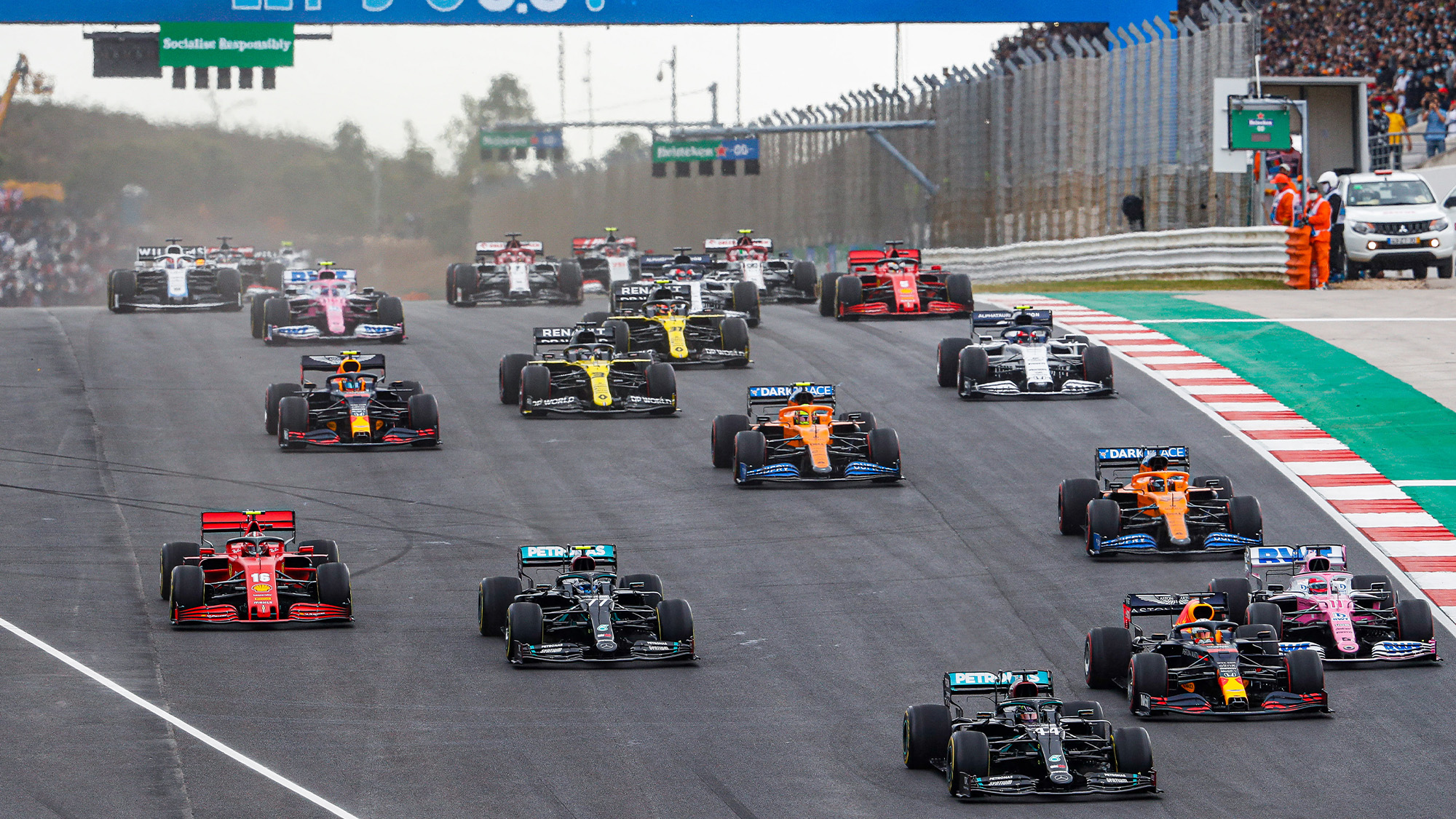 Sainz rocketed off the line behind polesitter Hamilton

There was light rain falling, but this was just simple grip levels, and everyone had miscalculated them. That was emphasised by the fact that Kimi Räikkönen was the only driver outside the top ten to start on soft tyres. He lined up 16th; he’d end the first lap sixth.

Bottas showed the same fight he had in Germany to force his way back past Verstappen at Turn Three to run second, and then saw Hamilton struggling at Turn Five. A few corners later and Bottas was through.

Behind him by that point was Carlos Sainz, because Verstappen and Sergio Perez had tangled at Turn Four and the McLaren was switching on the soft tyres a lot more easily than the Red Bull.

”I should have defended from Valtteri but I was like ‘I’ll come back later on’ and that’s what I was able to do.”

“I really don’t know, I was surprised myself to see it,” Verstappen said of his first lap struggles. “So we really have to analyse why it is because I tried everything I could on the formation lap to warm them up, and I don’t think normally I’m that bad on the first lap but it was very tricky. Most of it we stayed out of trouble and then Sergio tried to go around the outside and didn’t give space so he took himself out but luckily he didn’t damage my car.”

Verstappen was surprised given he was on softs, but Hamilton on the other hand was on mediums and took a conservative approach after nearly dropping it at Turn Six.

“I had a good start but then going into Turn Seven I had a huge oversteer moment,” Hamilton said. “I didn’t know what was next so I really backed off massively and arguably I really should have defended from Valtteri but I was like ‘I’ll come back later on’ and fortunately that’s what I was able to do.”

That approach led to Sainz cruising around the outside of Hamilton on the opening lap, and the Spaniard didn’t let up as he then forced his way through against Bottas on lap two to take the lead.

“Lewis was taking it super easy, I nearly crashed into him because he was braking so early and I could just drove around the outside no problem,” Sainz said. “I was expecting [Bottas] to pick up the pace but I was just super comfortable.

“I tried to show my nose to try and make him a bit nervous and look in the mirrors and he missed the apex a little bit. That got me into the lead.”

It was a stunning start to the race – none more so than by Räikkönen in sixth – but it was short-lived. The Mercedes pair got their tyres up to temperature and cruised past Sainz, with Bottas opening up a lead of nearly three seconds before Hamilton came alive and took the lead with ease starting lap 20. 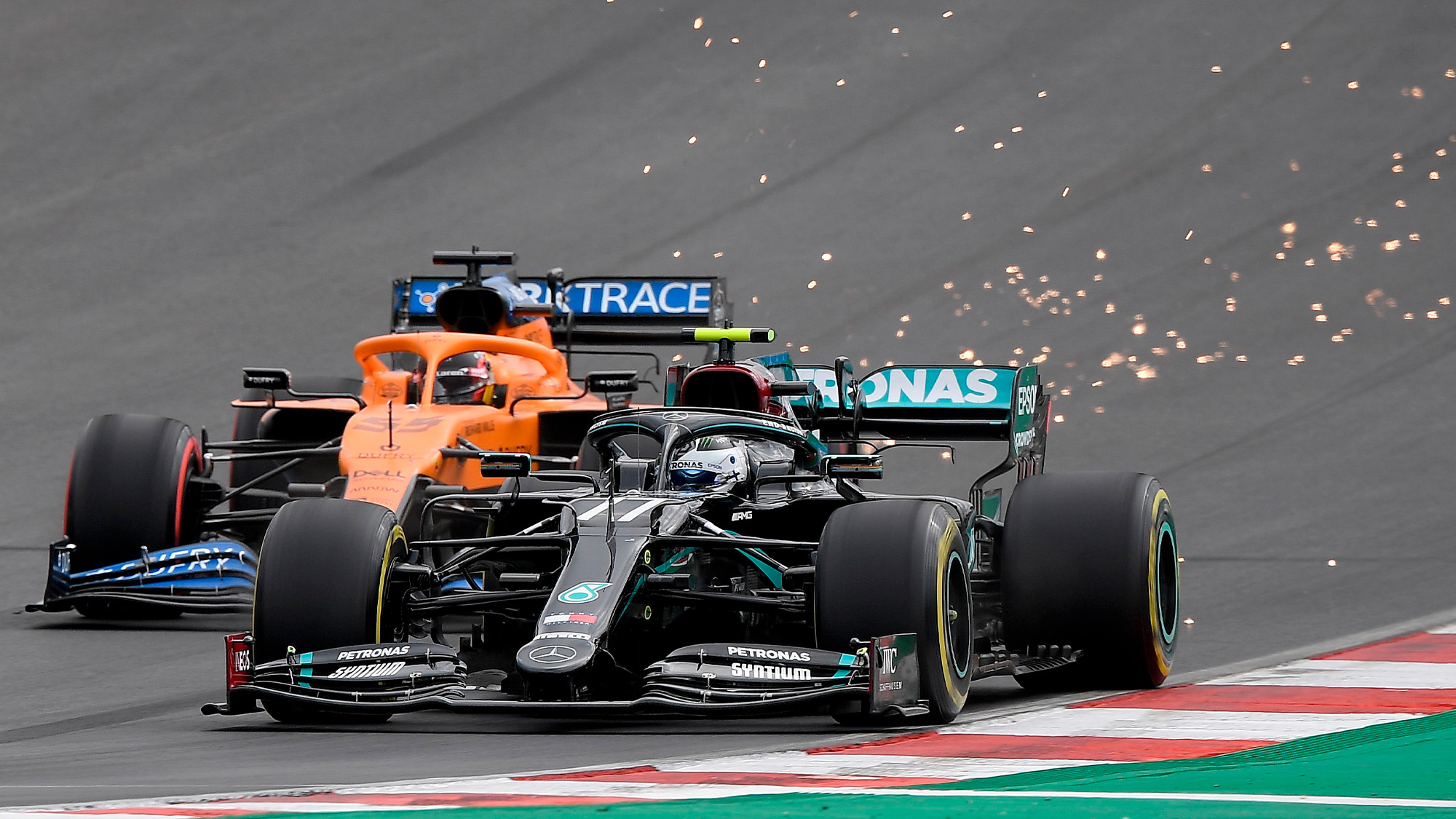 An early lead for Sainz was short-lived, with Bottas sweeping past on lap six

“The opening lap was pretty good, there was a bit of drizzle, which made it a bit tricky,” Bottas said. “Obviously, some cars from behind, on the soft tyre, had the upper hand, but I was pretty pleased I could get the lead. To be honest, after that, I just had no pace today, I don’t understand why, but no pace…

“I tried to defend but at the rate [Hamilton] was going to close there was nothing really I could do. Like I said, I have no idea why I didn’t have the pace today. Pushing hard but should have gone faster.”

From there, Hamilton was gone. He put in fastest lap after fastest lap – despite first complaining of poor tyres and later suffering from cramp – and left Bottas nearly half a minute behind.

It was the sort of dominance that we don’t always see even when Hamilton gets out ahead. He’s always comfortable, but he set a new record with a performance that is befitting of the moment. 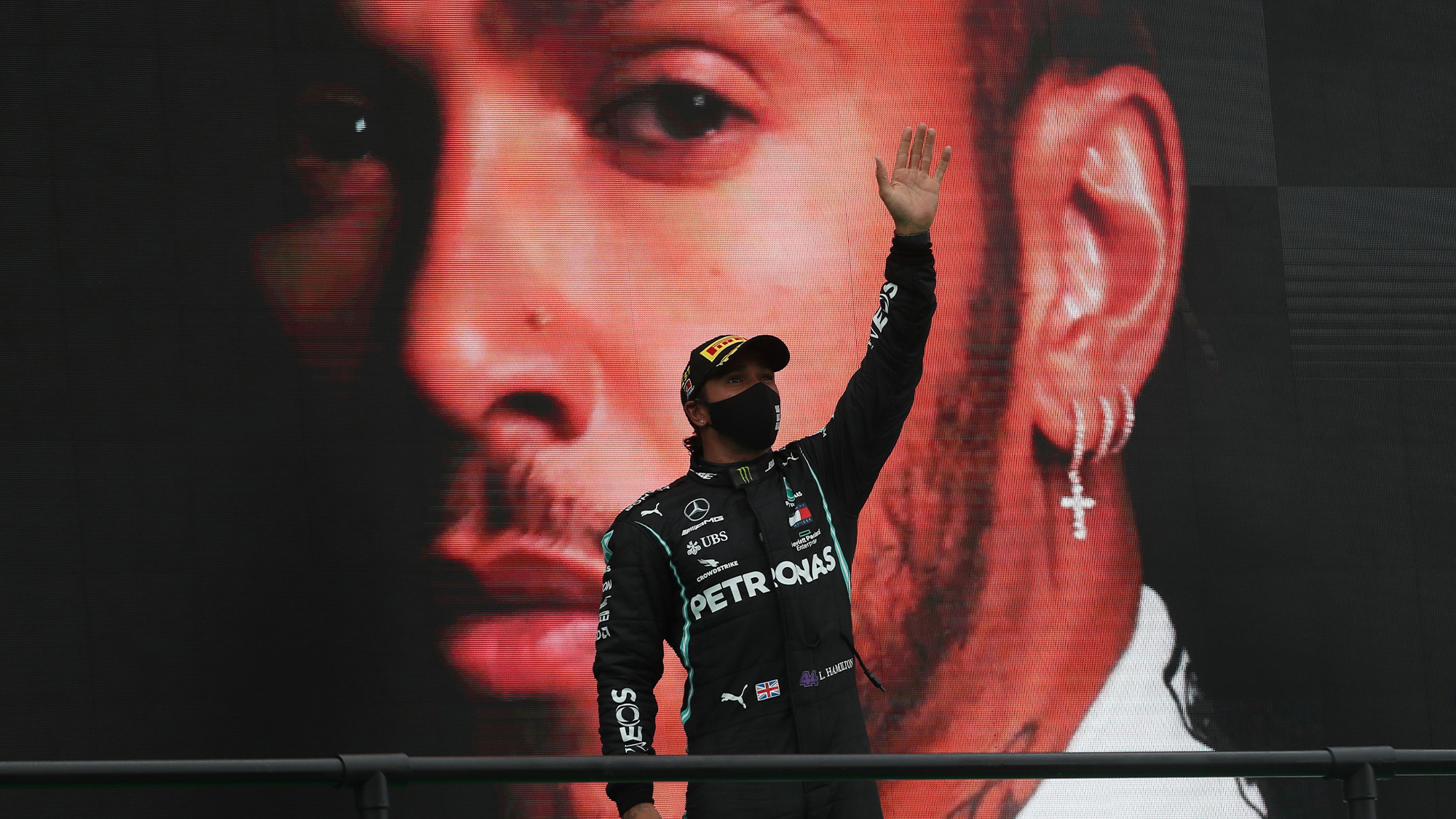 “Firstly when I come to these races I never think of the numbers, I just don’t let it enter into my thought process,” Hamilton explained afterwards. “At this track it’s very, very smooth, you see the trouble we’re having with the tyre temperatures and at the end of the race I was thinking of what I will and won’t say – in terms of what’s appropriate to say and what not to say – but ultimately it’s no secret, I think today was about tyre temperature.

“I felt through the race that I was learning lap-on-lap more about the circuit. I was trying lots of different lines and discovering new lines that worked well. The wind direction was very, very tricky – lots of crosswinds, headwinds and tailwinds – and there are some positions that you can utilize to your favour and others that kind of get in your way. I think the key is the times you have a tailwind it’s minimising the loss through those stages.

“Set-up was something that I really focused on, less about qualifying set-up it was more for the race set-up and today I think that enabled me to go one better than before. I generally felt like I was getting faster and faster throughout the race, but I had to keep up the pace for these tyres and that was really the key.”

Keeping the pace up translated into maximum points, and a non-event in terms of a fight between the top four. Behind Bottas, Verstappen stopped earlier but couldn’t make inroads on the medium tyre, while Charles Leclerc climbed back into the fourth place he had started from and showed excellent pace to lock it down. 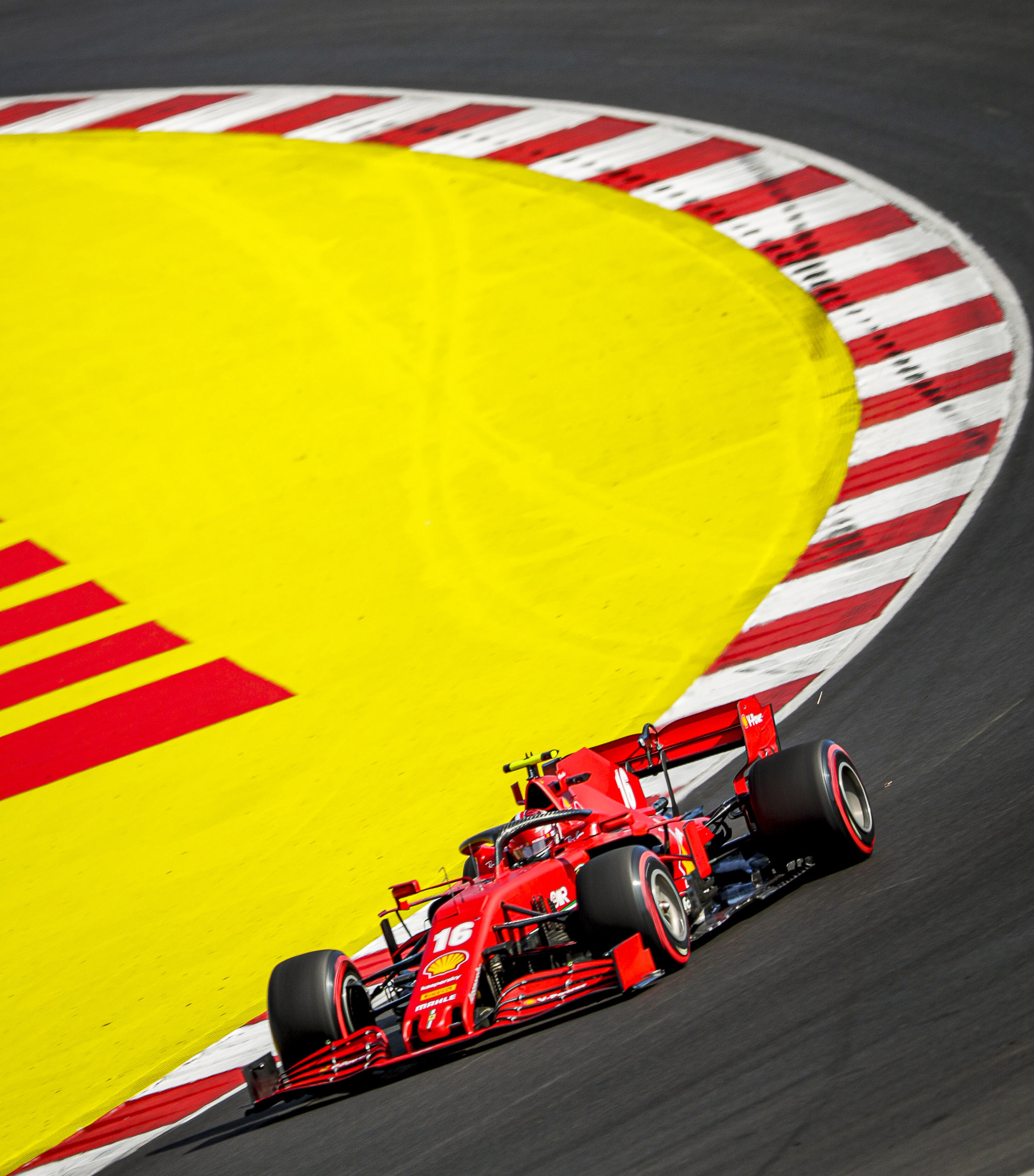 Fifth was up for grabs though, with Perez delivering an excellent recovery drive. There were no safety car interruptions but after a late second stop for softs he was still fifth, with Pierre Gasly close behind. After initially pulling away, Gasly came back at the Racing Point and pulled an impressive move around the outside into Turn One on the penultimate lap, learning from a close call between the two that earned Perez a reprimand one lap earlier.

“Some moves were very tight on the inside so I was very happy to make it around the outside on the next lap to get the fifth place,” Gasly said. “It felt good from the inside, but it didn’t look it from the outside.

“It was a great race for us and we are really strong at the moment, we finished sixth last weekend and fifth this weekend so honestly we really managed to extract everything from the car on Sundays and on my side I feel I am performing at a very good level so I will keep pushing that way.”

Perez dropped behind Carlos Sainz on their final lap – each being the only drivers to score for their teams as their team-mates collided at Turn One – but Gasly’s performance stood out even more in contrast to more struggles for Alex Albon.

An early stop put the Red Bull youngster in traffic and he ended up two-stopping but falling short of the points as Esteban Ocon, Daniel Ricciardo and Sebastian Vettel rounded out the top ten. For Vettel, it marked a solid performance in the context of his 2020 season, which also goes to show just what a special achievement we’re witnessing from Hamilton.

“I definitely sometimes wonder, ‘jeez I’m 35 years old’, I still feel physically strong but of course you wonder when is it going to tip over and when are you going to start losing performance?” Hamilton admitted after the race.

“But shown by today it’s not yet.”