When the results of what looks set to be the only Tuscan Grand Prix are looked back at, the familiar sight of a Mercedes one-two and a Red Bull in third will not pique interest in the same way that the Monza podium did. But this was an even more chaotic race, that for the first hour didn’t see much in the way of racing at all.

Lewis Hamilton made one mistake all afternoon out on track, and it was at the first start of the race. His launch from pole was poor and Valtteri Bottas easily led, but Hamilton got a lucky break. Max Verstappen suffered a power unit issue that saw him go from side-by-side with the championship leader around 100 meters after the line to 14th at Turn 1, and by Turn 2 he was in the gravel.

Support races in F2 and F3 this weekend showed the potential for incidents when fighting through the first sector and three into one didn’t go as Kimi Räikkönen caught a snap of oversteer climbing out of the first corner. Räikkönen was on the right and Pierre Gasly in the middle, with Romain Grosjean on what was about to become the outside of Turn 2. Gasly moved right in response to Räikkönen but touched Grosjean, nudging him back to Raikkonen in a sandwich. 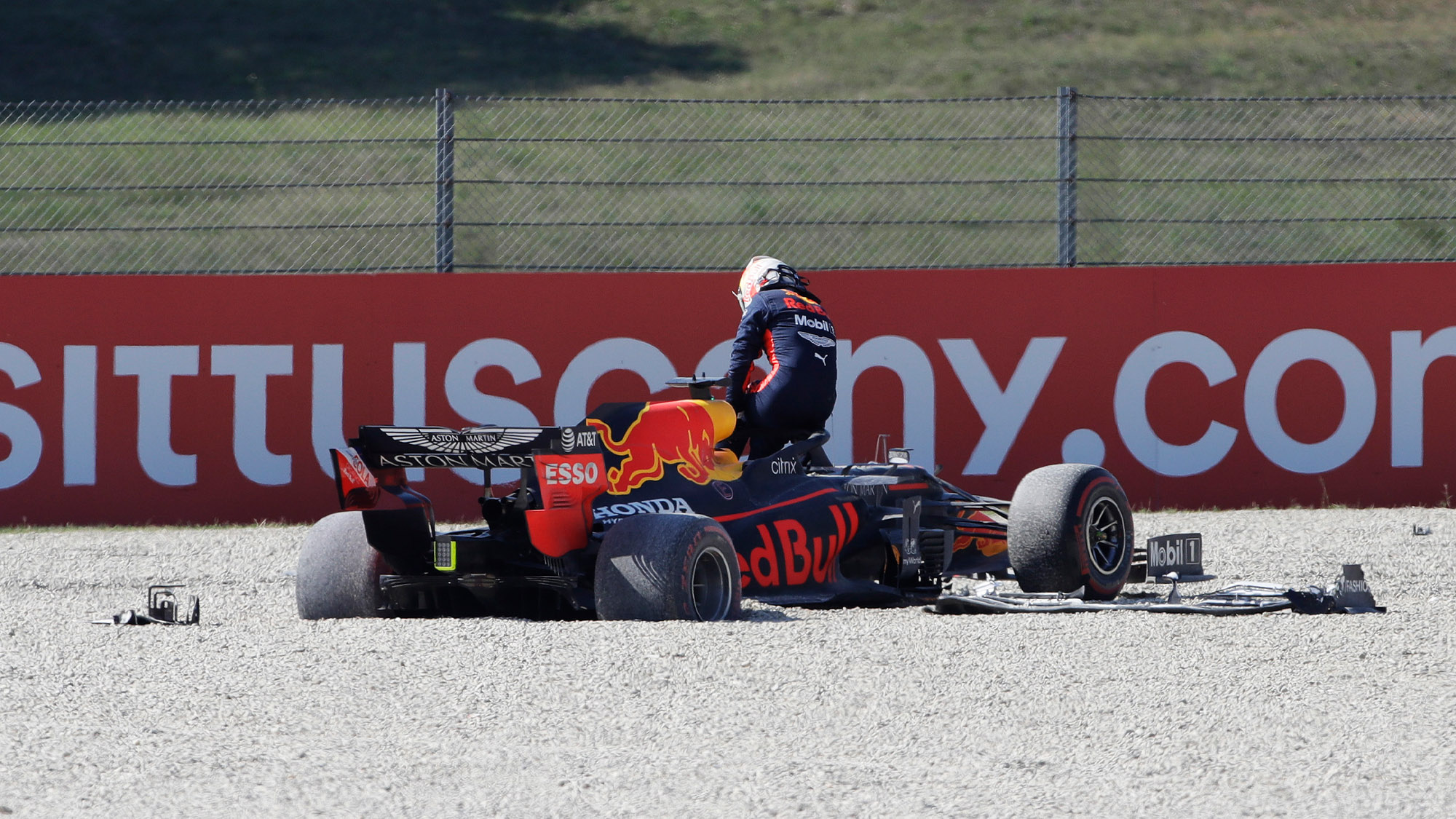 Verstappen climbs out of his beached Red Bull

Gasly was briefly airborne as the trio took Verstappen with them, only Räikkönen making the corner minus his front wing while the Red Bull and AlphaTauri retired in the gravel. Grosjean even ended up in the barrier but somehow continued with a damaged car.

The gravel is a redeeming characteristic of Mugello, but less redeeming is the time it takes to recover cars given the tight access caused by the undulations of the track. So it wasn’t until the end of lap six that racing resumed, and for four drivers they didn’t even make it across the start line.

The Safety Car lights went off late and Bottas opted to use as much of the pit straight as possible before accelerating away in order to reduce the tow effect. Further back in the pack, something triggered movement from other drivers and Nicholas Latifi accelerated behind Kevin Magnussen, darting to the left when he realised there had yet to be a restart.

But Latifi – though not appearing to be the initial trigger – had then led to others behind him putting their foot to the floor, and when the Williams moved around the slow Magnussen, Antonio Giovinazzi had nowhere to go. The Alfa Romeo struck the rear of the Haas hard, and Carlos Sainz was next on the scene at full throttle, wedging underneath Giovinazzi briefly. Latifi also took a hit and cars were left scattered across the pit straight.

“It was pretty sketchy,” Latifi said. “When you’re in this position you can only see the few cars in front of you, you can’t see the leaders … Really I think everyone who was involved in the incident itself, we were all just passengers, there was nothing more that we could have done. 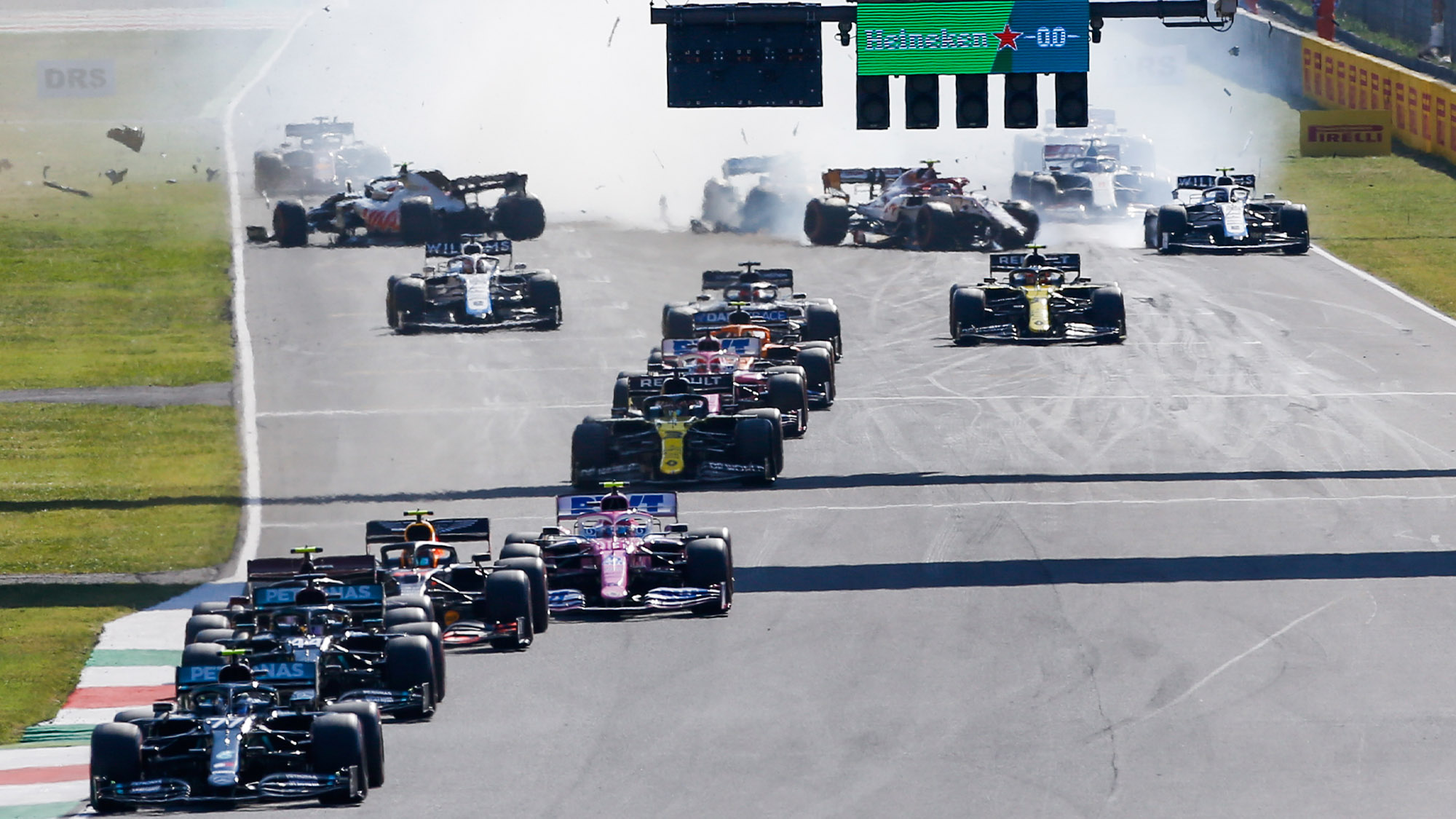 Safety car restart brought the second pile-up of the race

“When something like that happens you think it’s the fault of the guys at the front because they’re the ones controlling the pace, but having watched the video back I don’t think the leaders did anything wrong. “But there was definitely some guys in front of us that were leaving too big a gap and then because they were leaving a gap they then accelerated flat-out into this gap when the race hadn’t restarted, but they could see that the race hadn’t restarted, they’re just trying to close the gap. But obviously the guys behind see that and think you’re going.”

A red flag was required for the second weekend in succession as cars were removed, and that meant another standing restart. On Saturday, Bottas wanted a headwind into Turn 1 to give him a better tow against Hamilton off the line. He got it, but it hurt him on the second start as he saw Hamilton slot in behind him and cruise past with the slipstream to take a lead he would not relinquish.

“Frustrating isn’t the right word, because I felt I really tried everything,” Bottas said. “At least the first part, the first start was absolutely perfect, on the restart I managed to keep my position and felt that the pace was good.

“Once I lost the position to Lewis, on the second start, I tried everything I could to get it back but I couldn’t. He as faultless today and it was a pretty crazy race, it feels like we had three races instead of one. I tried and I feel it’s just a matter of time before things will go my way. It will come and I’ll keep pushing.” 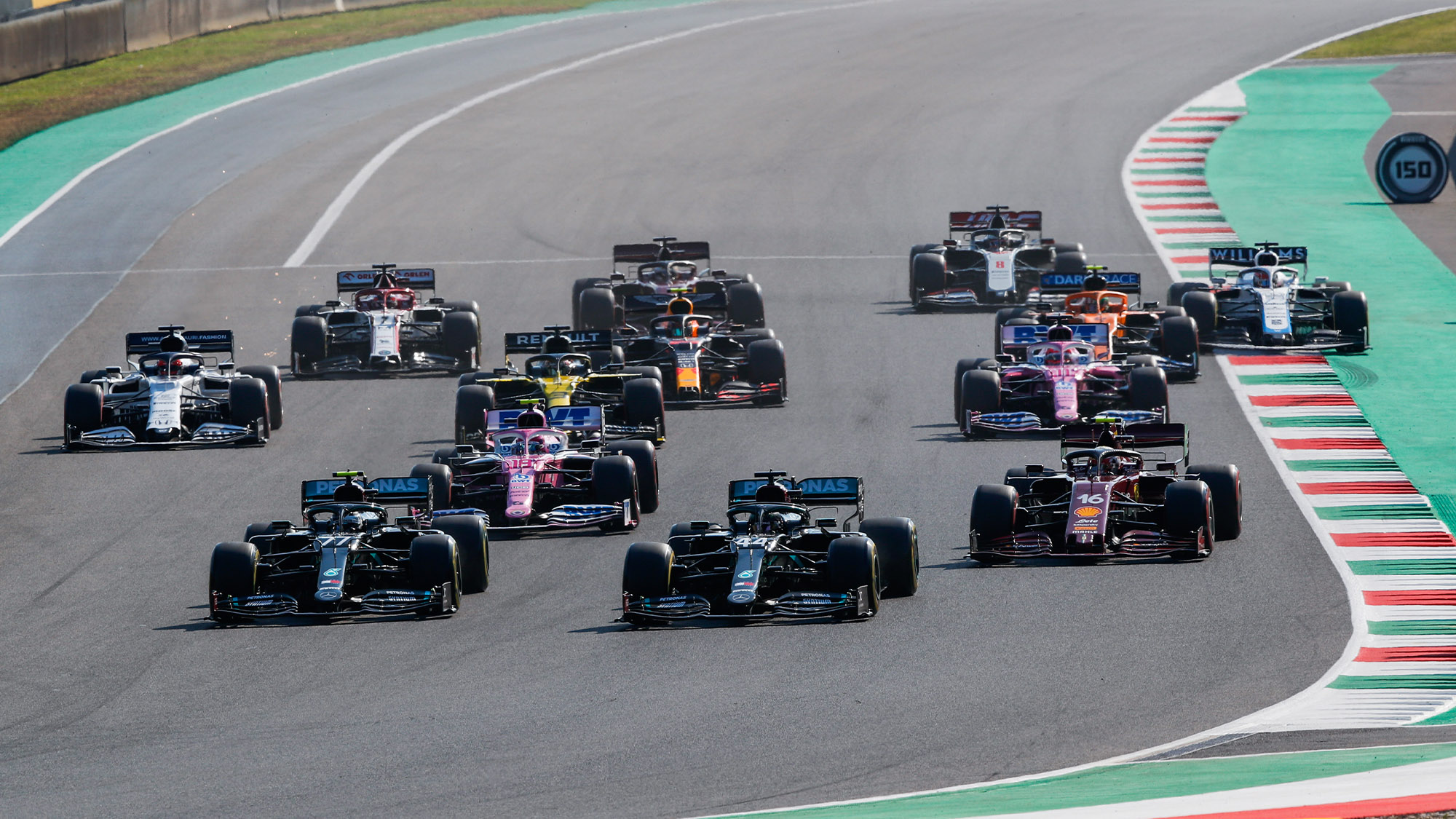 When the first full racing lap was complete, Charles Leclerc was third behind the Mercedes pair after making an excellent getaway on the original race start, with Alex Albon dropping from fourth to seventh behind Lance Stroll, Sergio Perez and Daniel Ricciardo.

Perez appeared to be struggling, and soon slipped behind both Ricciardo and Albon, but Leclerc was suffering from Ferrari’s lack of performance in its 1000th race even more. He plummeted down the field with little fight as the DRS proved effective enough for overtaking into Turn 1, and Ricciardo set off after Stroll.

Renault went for the undercut on what was now effectively a one-stop race and managed to jump Stroll for third, while Albon closed up on both as an exciting fight for the podium shaped up. It was needed, as Bottas had faded badly on his first set of medium tyres after the red flag and was over six seconds adrift of Hamilton, with both going to the end on hards.

“Safety Car would be nice now,” Bottas said when told to not push too much during the long stint. And he soon got his wish.

Mugello punishes mistakes but Stroll appeared blameless when a failure saw him fly off the track at flat-out second Arrabbiata, suffering a big hit against the barrier. The damage was significant to both car and barrier, and a fire under the engine cover needed extinguishing even as the car was craned away. 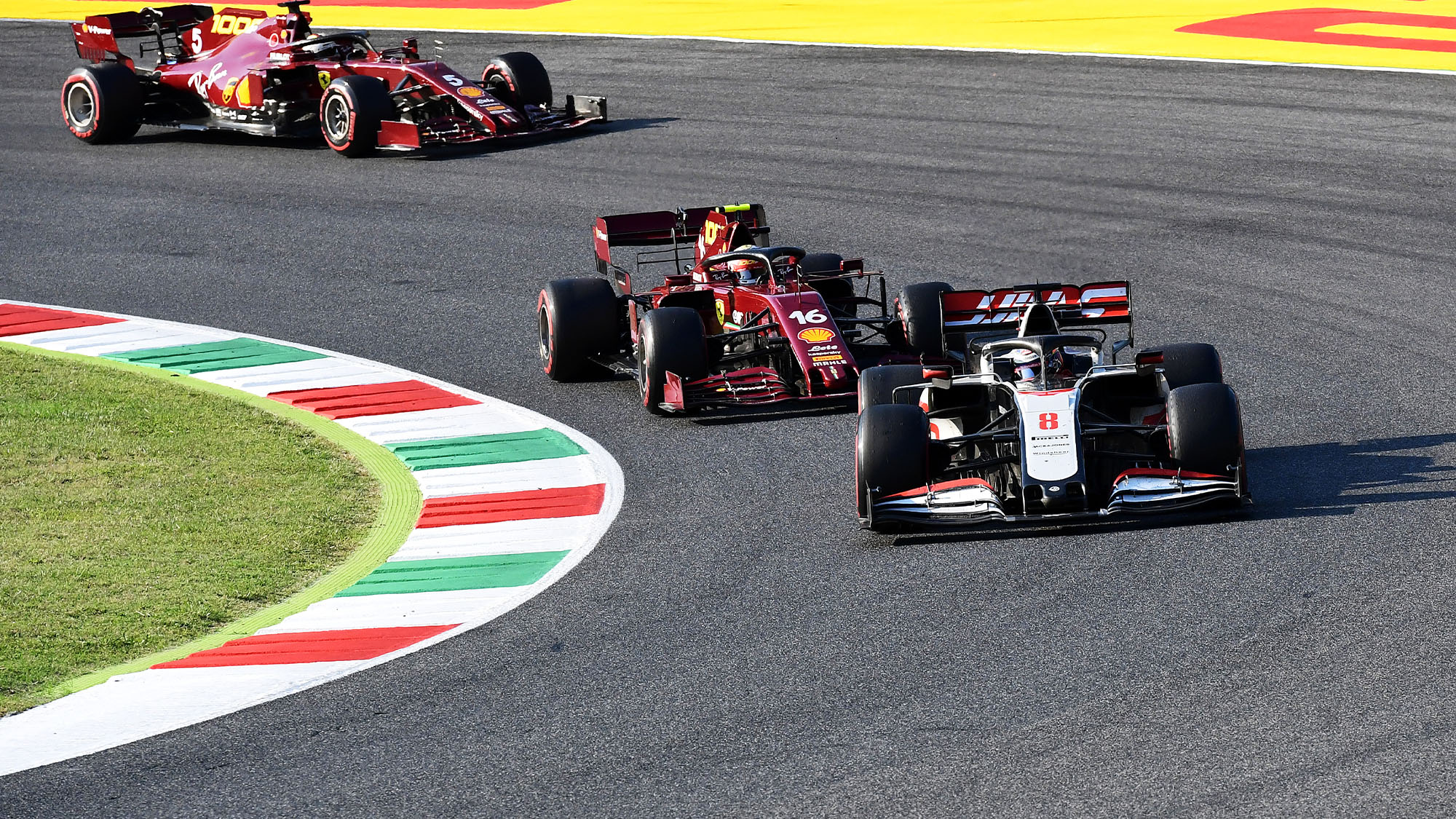 With Esteban Ocon an early retirement due to brake issues, that left 12 cars facing a 13-lap sprint to the flag, again from a standing start.

All 12 went for soft tyres, so the restart was crucial, and from second on the grid Bottas had a chance of finally benefitting from that tow he had originally hoped for. Instead, he botched the launch and Ricciardo jumped into second place.

It was short-lived as Bottas swept back past the Renault around the outside of Turn 1 a lap later, but Hamilton had enough of a gap to push for fastest lap, cool the car and recharge the battery and go again. Bottas ended up just over a second adrift, but never close enough to attack.

“Hectic!” Hamilton described the race as afterwards. “Such a roller coast ride, emotionally and physically. Valtteri was so quick all weekend so keeping him behind with the starts and stops we had, I wouldn’t say it was very easy to stay in the zone. I’m really proud of my performance today because it was not easy.” 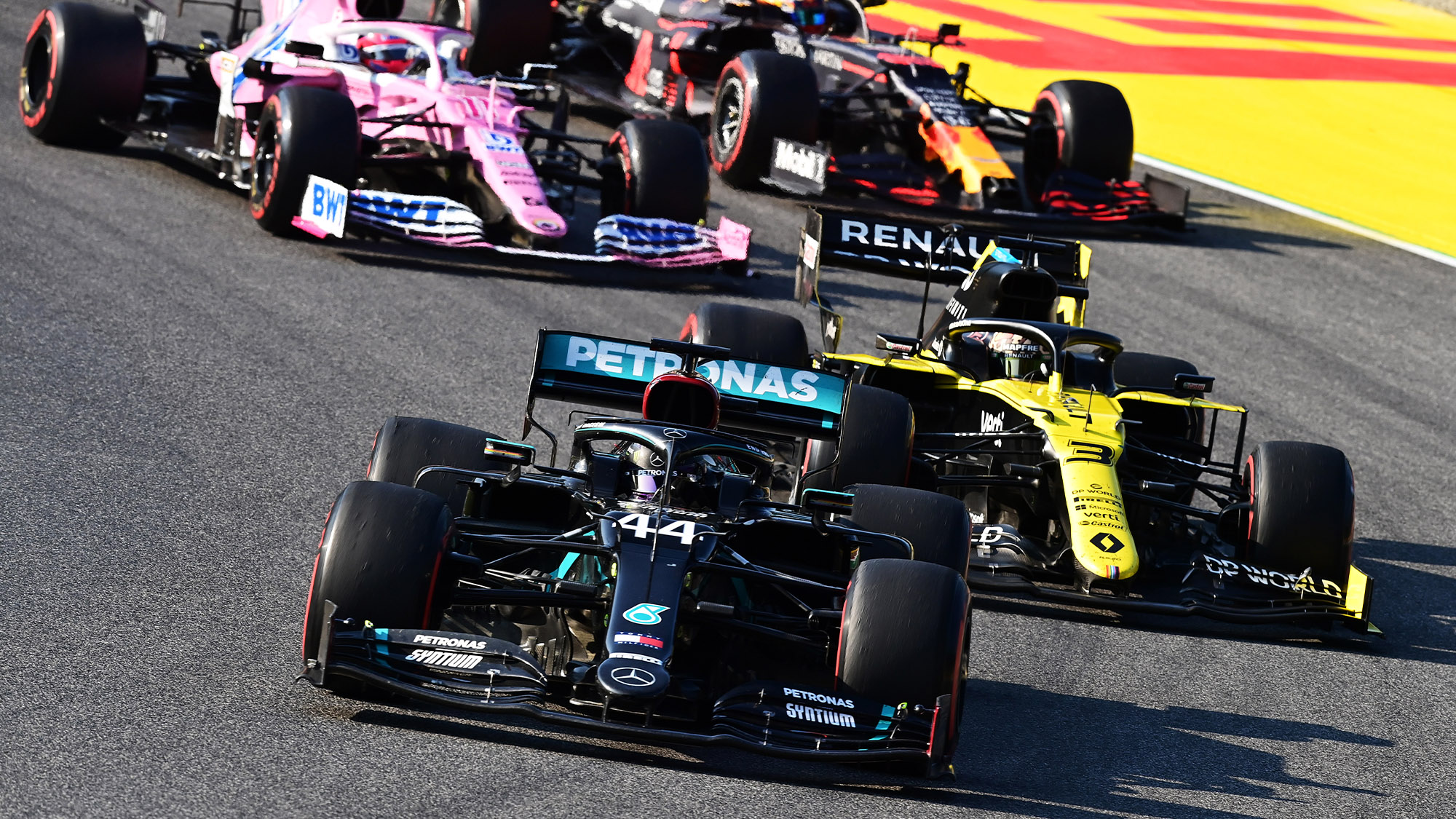 Ricciardo had told his team “Let’s finish what we started” before the final restart but his pace was also lacking on low fuel and soft tyres, with Albon able to match Bottas’ overtake on the Australian to secure a well-deserved first F1 podium. 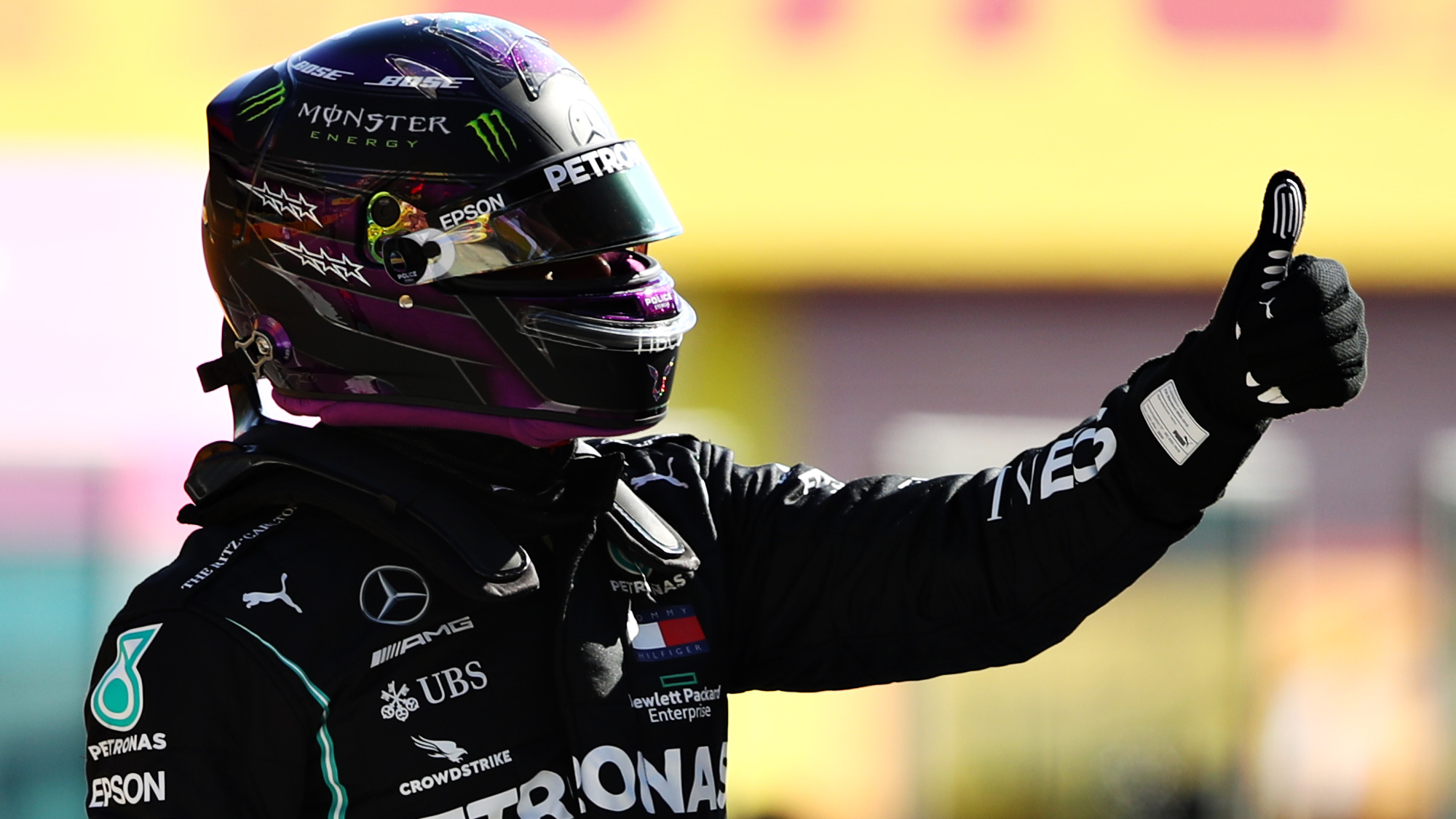 Nobody wanted the dark cloud of a global pandemic but, as silver linings go, it doesn’t get much better: rolling Tuscan hills, a track like Mugello, the fastest F1 cars…

“It was nice to finally get that podium” Albon said. “Obviously under the circumstances as well it was a tricky race. We weren’t very good off the line so a lot of the overtakes had to be on the track and that made it exciting. We had a really good car today and fortunately we were able to extract it and do the overtakes when we needed to.”

In all the drama, only two teams got both cars to the finish. While Mercedes finished one-two – and Hamilton moved to within one of Michael Schumacher’s all-time record of 91 wins – Ferrari were limited to eighth and tenth, split by Kimi Räikkönen despite a five-second time penalty for the Finn. But Ferrari should be praised for putting on a great event at a track that wasn’t on the original 2020 calendar, and would be more than worthy of a spot in future years. Especially if it continues to deliver this sort of entertainment.