You get funny weather in the mountains but, strangely enough, you’ve got to go back to the seventies for a rain-afflicted race at what was then the Osterreichring.

The older among you might recall Vittorio Brambilla punching the air in jubilation after winning a prematurely-stopped Austrian GP in his March – and promptly crashing. Or Mario Andretti sliding off and Ronnie Peterson claiming his last GP win only weeks before he succumbed to injuries sustained at Monza. Or Alan Jones winning his first Grand Prix, for Shadow.

When it rains here, it rains properly. And that was the forecast for qualifying at the Styrian Grand Prix, the first time F1 has ever run consecutive races at the same venue. All the talk was of postponing qualifying until Sunday morning but, to the credit of both F1 and its 20 drivers, a fantastically entertaining session in awful conditions enlivened Saturday afternoon after FP3 was cancelled.

No surprise then, that the pole man, for the 89th time in his career, was Lewis Hamilton. Of the last 13 wet F1 qualifying sessions, Lewis has taken pole nine times. And, for the record, Mercedes can boast a clean sweep, with Nico Rosberg on top in the other four.

It’s true that in such conditions, the car with the most downforce is what you want beneath you. And there’s no denying that for the past few seasons Mercedes has had that car. But that sells Hamilton vastly short. You still have to drive flat-out at more than 200mph when you can’t see where you’re going.

Alain Prost, for one, was never keen on that. His precision and skill-set made him quick in the wet, but racing in blind spray, he thought, put you in the lap of the gods, a place he preferred not to be.

George Russell likened it to driving at 200mph on a motorway with your wipers turned off. It takes courage and commitment. And great skill. Hamilton’s 1.21sec margin over fellow front-row starter Max Verstappen emphasised the degree of it.

“I had a big moment, a big aquaplane on the lap before my best one,” Lewis admitted. “I just love these days, like at Larkhall….”

It was revealing that at such a moment his mind drifted off to the purity of his karting days, where he learned his wet weather craft and developed those skills. Before adding, with a smile behind his Covid mask, “but it’s a bit different in an F1 car…!”

Max Verstappen has great karting genes too, from Dad Jos and mother Sophie Kumpen. He was quickly into his stride, finishing a tenth behind Lewis in Q1, a tenth behind him in Q2 and topping Q3 more than once before having to give best to Hamilton after losing it at Turn Nine.

“It was raining harder in Q3 and we were struggling more,” he explained. “I just couldn’t get the power down as well and was aquaplaning. My last lap would have been better but not enough to beat Lewis. It was really tough. From even 6sec behind a car it was really hard to see the braking zones. I’m happy though. I think the car’s better than last week and we should have a decent shot at it in the dry tomorrow.”

Carlos Sainz has always been a man to watch in the wet and did a fabulous job to claim third on the grid, less than two-tenths from Verstappen and three-hundredths clear of last week’s pole man and winner Valtteri Bottas in the second Mercedes.

It was a career-best F1 qualifying performance in what Sainz considered to be the toughest session he has contested in the sport’s top echelon.

Bottas wasn’t thrilled with his second-row slot and reported a problem generating heat in the tyres, part of which he put down to a glazed right front brake. Interestingly, the drivers of the pink Mercedes both reported lack of grip from the rubber too, with Sergio Perez failing to make it out of Q1 and Lance Stroll — a decent wet weather driver – starting 13th. You’d have been tempted to think that Bottas’s lap was a decent effort had it not been for his team mate’s time…

A delighted fifth, just 0.22sec behind the second Mercedes was Esteban Ocon, who was at the sharp end in every qualifying session. It was no mean feat for the Frenchman to be showing Daniel Ricciardo, 9th, the way in such conditions. 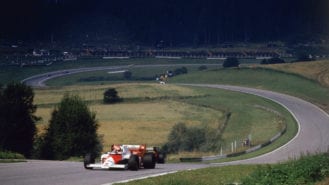 “Every time it rains in F1 I feel very comfortable,” he smiled. “Actually, I didn’t have a new set of wets left for Q3, so it might have been even better.” Another quarter of a second would have had him vying with Sainz for third.

Just three thousandths behind was last weekend’s podium finisher Lando Norris, another fine effort in what was only his second experience of an F1 car in the rain after Hockenheim last year.

It has been far from a straightforward weekend for Norris so far. Chest and back pain from the compression of braking g-forces restricted him in Friday practice but was assisted in qualifying by a combination of the medical cabinet, massage and the reduced forces at work in the wet. He conceded though, that 70-odd laps on a dry circuit tomorrow may pose a challenge.

Like Bottas, Alex Albon suffered in comparison with his team mate. Still not happy with the Red Bull RB16’s handling, which he found snappy, he was nevertheless seventh and just a tenth behind fifth.

Snapping at his heels with one of the performances of the day was Pierre Gasly in the first AlphaTauri, with Sebastian Vettel’s Ferrari rounding out the top 10 after Seb pipped team mate Charles Leclerc to the final Q2 spot.

Starting 11th, last year’s pole man would normally be able to console himself as first man outside the top 10 with the freedom to run an offset tyre strategy. But, with qualifying wet, Leclerc won’t even have the benefit of that small saving grace. In cars with better race than qualifying pace but poor straightline speed, Maranello’s finest face a frustrating Sunday afternoon.

Heroes of the hour? Lewis, for sure. Sainz? Yes. Ocon? Yep. Gasly? Definitely. But maybe George Russell deserves the loudest applause. While the rain was never going to level the pitch enough for Russell to compete where he belongs, it did so sufficiently for him to put a Williams 12th on the grid.

“The car was moving around a lot. And it was so hard to see that my engineers were having to tell me where other cars were, but I loved it,” he enthused.

Had Russell managed to find just another nine-hundredths, he’d even have made Q3! While it’s fantastic to have a fighter like Alonso on his way back to F1 with Renault, and way too early for Vettel to be forced to vacate the premises, Russell is a man that deserves a seat in a top car. Bottas may be a decent guy and a quick driver but you do even wonder whether, a little way down the road, George could yet emerge as the biggest threat to the fellow who once more sits imperiously at the top of the time sheet.

Hamilton’s wet-weather masterclass, from Larkhall in 1998