0.7 seconds. That was the difference between Lewis Hamilton and Max Verstappen at the end of the Bahrain Grand Prix after a thrilling battle that sets the 2021 season up beautifully.

With just four laps remaining, the gap was less than that. With three to go, Verstappen led for six corners, but had to yield after an illegal overtake. It was edge-of-your-seat stuff.

And it had all come together for the finale after a strategic battle that started early on.

The signs were ominous for Red Bull from even before the word go, as Sergio Perez — running two new power unit components after a precautionary Honda change overnight — stopped on the formation lap when an electrical failure saw his car cut out. He managed to restart it before the field completed its second formation lap, allowing him to take up a position at the end of the pit lane for the start. 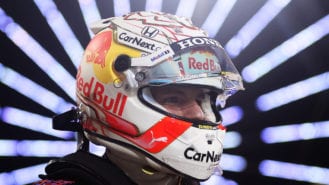 Verstappen led away but the sight of a Haas crashing at Turn Three was repeated from four months ago as Nikita Mazepin’s debut lasted just a few hundred metres before he dropped at the back of the field on cold tyres and spun into the barrier. The safety car was required for two laps before racing resumed, and Verstappen had already complained of a problem accelerating out of slow-speed corners, later diagnosed as a differential issue that he had to manage throughout the race.

With Charles Leclerc up to third ahead of Valtteri Bottas on the opening lap, three different cars spread across the track on the restart but Verstappen stayed in the lead ahead of Hamilton, as another virtual safety car interrupted matters before a full racing lap had been completed. Pierre Gasly – starting from fifth on medium tyres compared to softs for those around him – dropped behind the two McLarens but clumsily clipped Daniel Ricciardo at Turn Six and broke his front wing, leaving debris on track.

Behind that, Mick Schumacher became the second Haas to spin, only going one corner further than Mazepin had managed on the first race start before swapping ends but being able to continue. 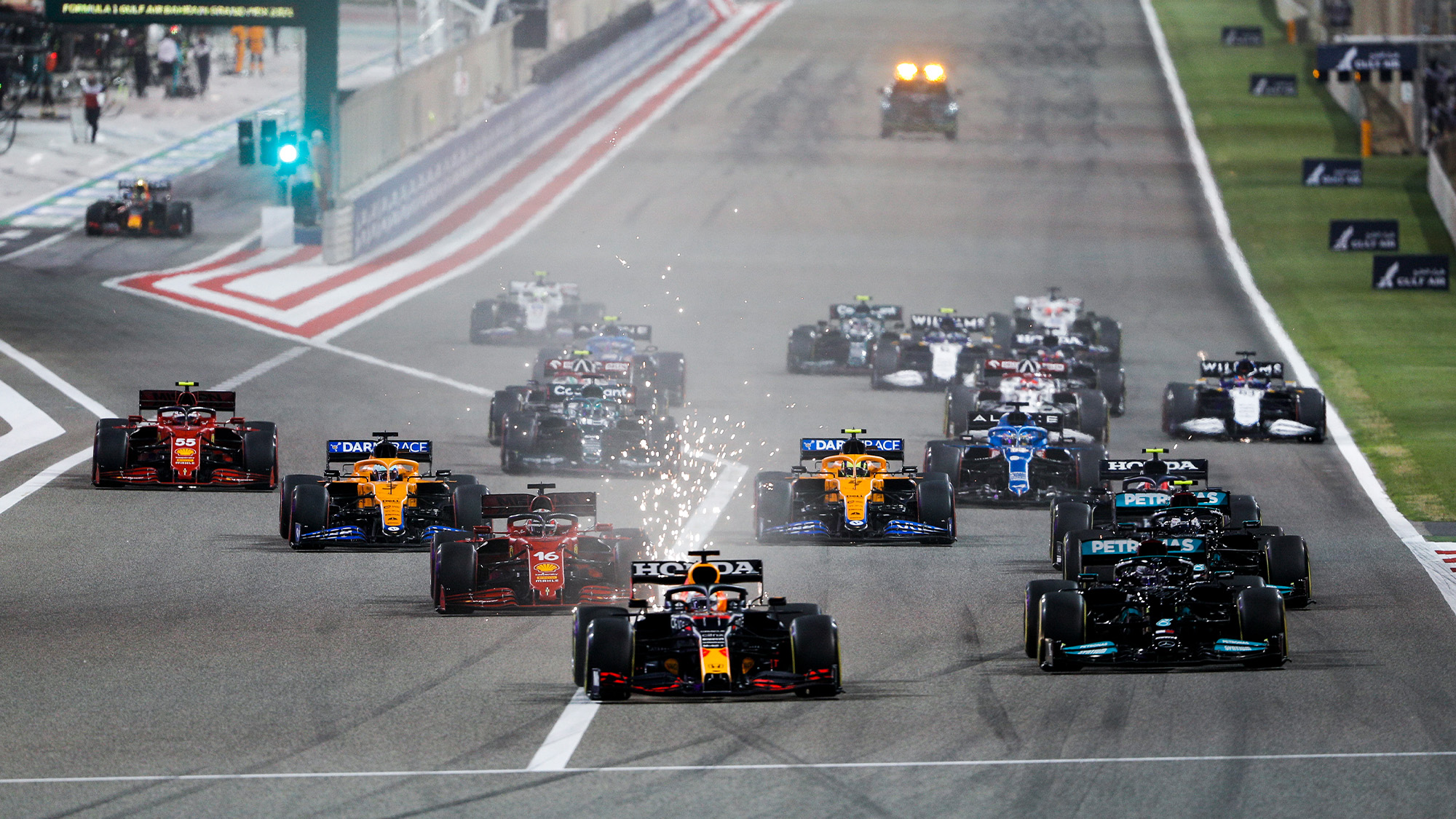 Verstappen led from pole at the start

Once the race finally got into a proper opening stint, Verstappen looked comfortable for a while, pulling two seconds clear of Hamilton and managing his pace despite his diff complaints. That prompted Mercedes to try something different, with Hamilton pitting on lap 13 for hard tyres, opening up a potential three-stop strategy but also guaranteeing track position once Verstappen didn’t respond instantly.

“There were a few things going on throughout the whole race,” Verstappen said. “They undercut us and we were just sticking to our strategy, which I think was working fine but the problem is with these cars it’s so hard to pass. Once you have that track position it showed today that it’s just super powerful.”

With the top two out of sequence, the battle was set up to come to a head late on, but there was no shortage of drama elsewhere in the interim. Lando Norris had got the better of a good scrap with Leclerc for fourth after going wheel-to-wheel through Turn Four, and Perez had been making moves after his pit lane start and an early stop for more medium tyres, climbing into the top three before his second stop. 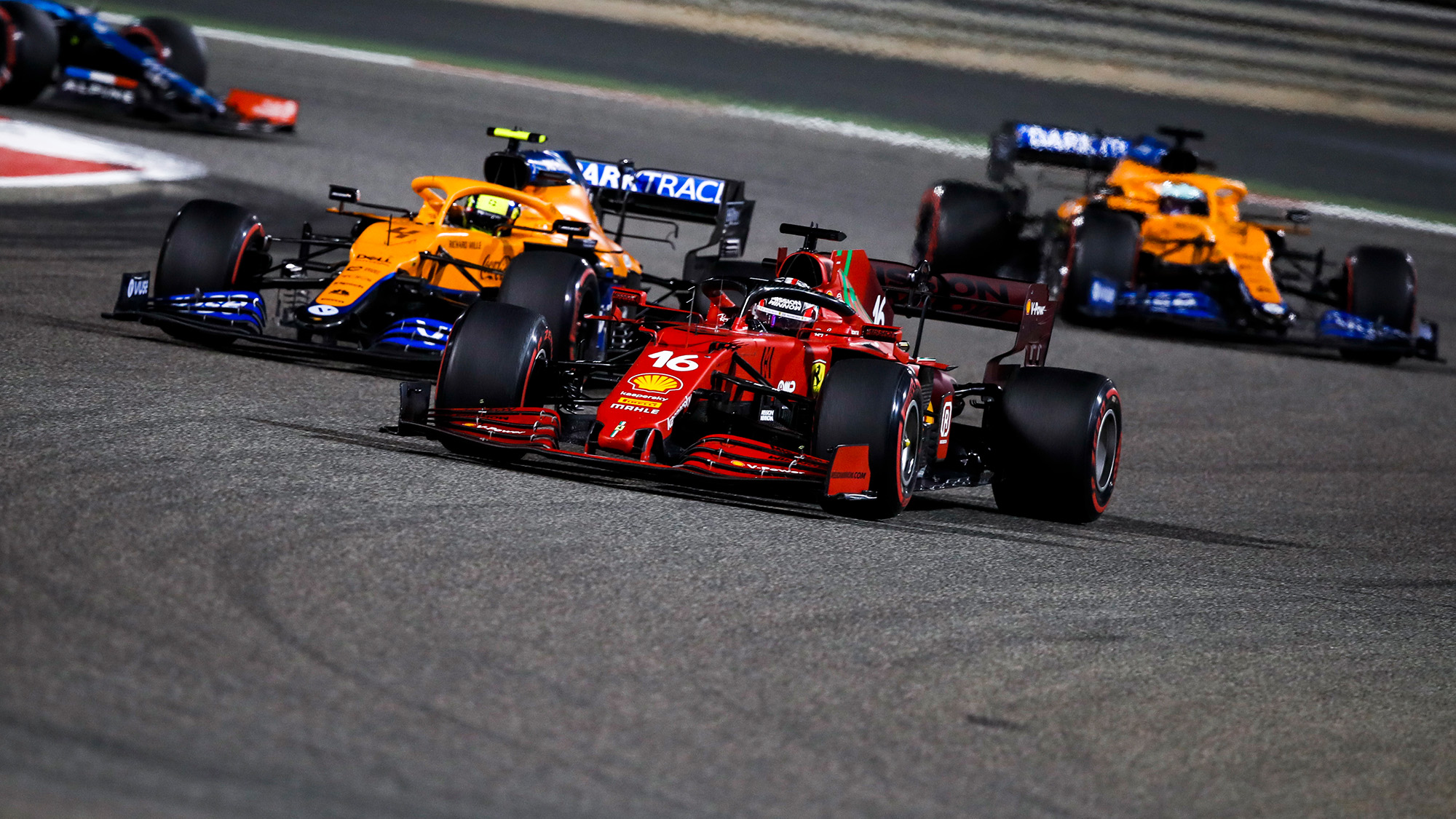 There was also action from young and old as Yuki Tsunoda recovered from a tentative first lap to approach the points, and Fernando Alonso used an undercut to fight with Lance Stroll and Ricciardo in the lower reaches of the top ten.

Although Bottas had threatened to join the party at the front at one stage, he was dropped out of contention by a slow second pit stop and couldn’t live with the pace as the final stint progressed regardless. Hamilton stopped for a second time at the halfway stage on lap 28, and Verstappen pulled out a solid medium tyre stint before switching to hards 12 laps later.

With such an advantage, it seemed certain that Verstappen would reel in the 8.8sec lead Hamilton had and he started quickly — setting the fastest lap — before the jeopardy of his situation was highlighted. 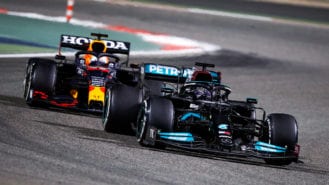 Lewis Hamilton secured a magnificent victory in Bahrain over Max Verstappen in one of F1's most memorable battles in recent years. The hopes were that Red Bull would be in…

Sebastian Vettel was forced to start from last place after a grid penalty for ignoring yellow flags in qualifying, and he went for a one-stop to try and salvage something on his Aston Martin debut. As Esteban Ocon overtook him using DRS before Turn One, Vettel slotted in behind and then duly ran into the rear of the Alpine, pitching both into a spin and earning a ten-second time penalty.

Both cars were able to continue, preventing the need for a VSC or safety car, but Verstappen knew he had to get on with it and closed up on Hamilton’s gearbox, finally diving to the outside at Turn Four with four laps to go.

Hamilton all but matched his braking point and the Red Bull was forced to go off track on the exit to complete the pass, soon receiving the instruction to return the position to the seven-time world champion. It proved crucial. 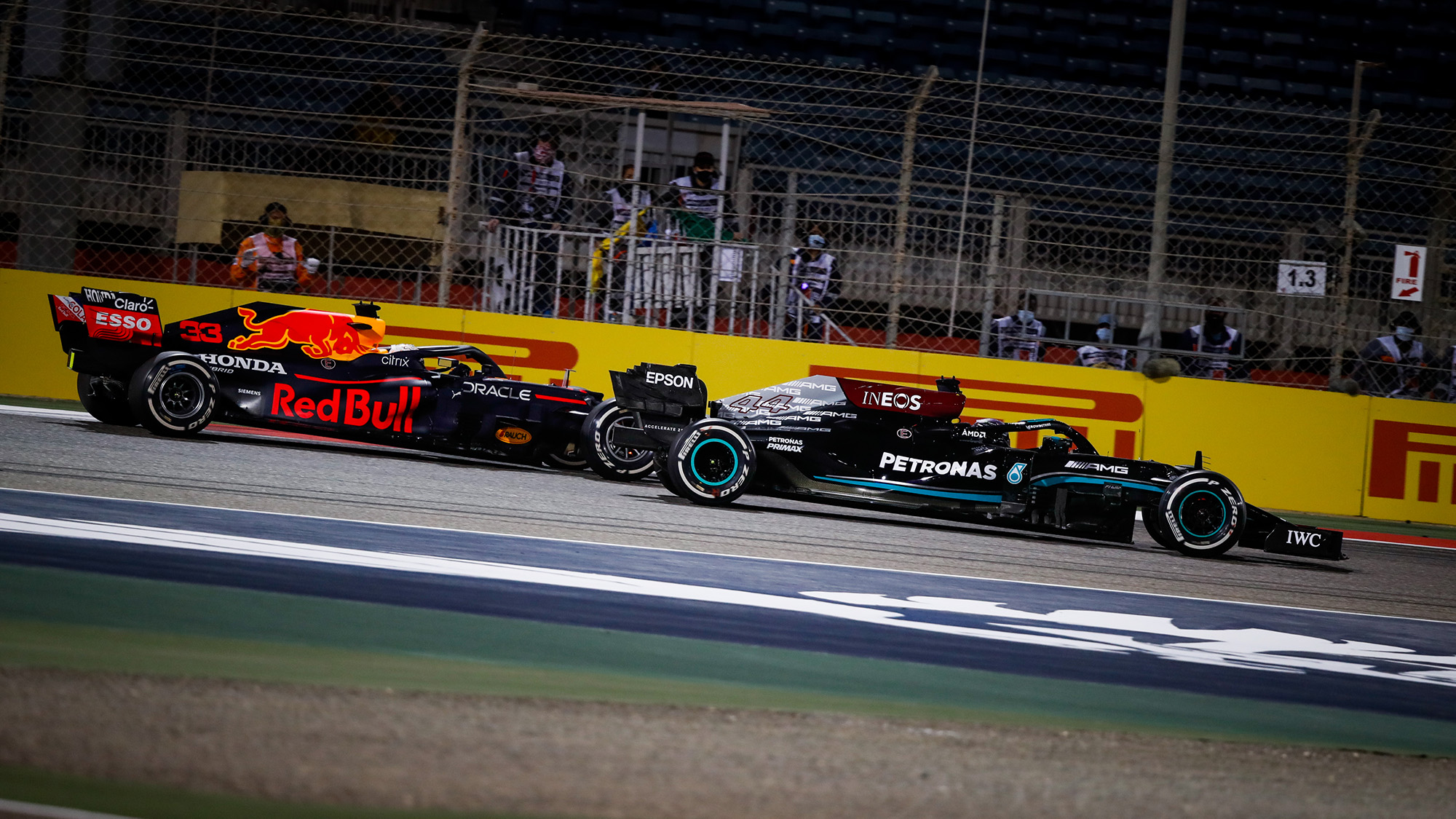 “As soon as I got close I had that one shot because Lewis got held up a bit because of the backmarker,” Verstappen explained. “I went outside of the track, of course then gave the position back and tried again but my tyres were not in a good state anymore to really put the pressure on. That was a shame.”

The instruction to give the place back came from Red Bull after a message from race control, and team principal Christian Horner admits it feels like a win that got away.

“We had a better tyre for the final stint but unfortunately Lewis had just enough to be able to hold on,” Horner said afterwards. “Tough to lose a race like that, obviously we managed to get the pass done at one stage, got wide at Turn Four – Max was very sporting and gave it back immediately, but obviously tough to lose a close race like that but we have to take a lot of positives out of the weekend.”

It’s easy to focus on Red Bull because of the pace shown in testing and throughout the weekend, but that does a disservice to Hamilton. His final stint was another magnificent display of tyre management while nailing his exits out of Turn 13 in the closing stages, denying Verstappen the best chance of overtaking into Turn One. 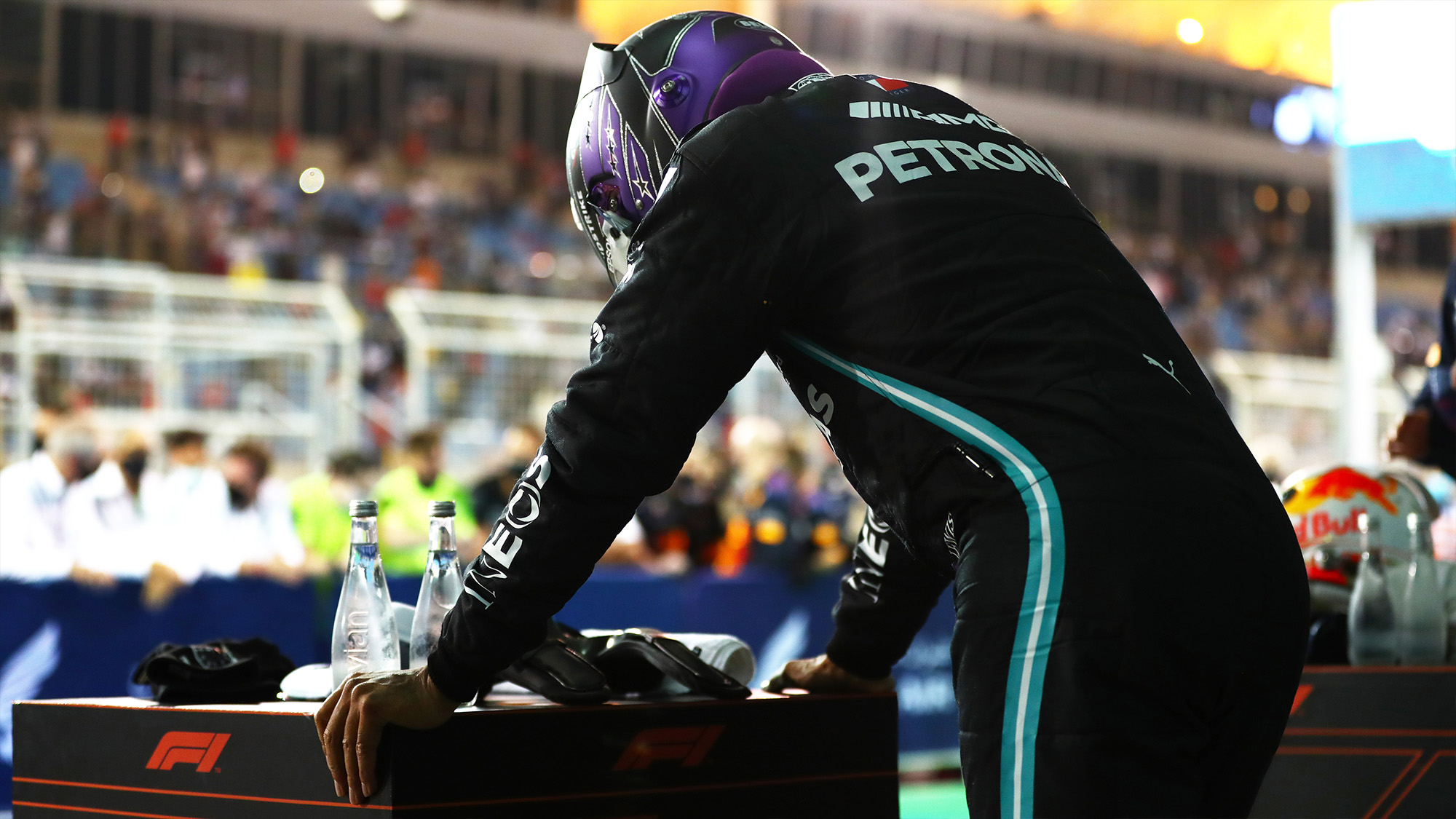 A truly hard-fought victory for Hamilton

“Wow, what a difficult race that was,” Hamilton said. “Definitely stopping early, we knew it was going to be difficult but we had to cover Max. They’ve had an amazing performance all weekend. So it would take something really special.

“We stopped for that last stint and were trying to find the right balance between not pushing too much and having tyres that were alive at the end of the race. It was difficult and Max was all over me right at the end, but we just about managed to hold him off. It was one of the hardest races I’ve had for a while, so I’m really grateful for it.”

Bottas came home a distant third but at least salvaged the fastest lap after a late pit stop, while Norris fairly cruised to fourth in a strong showing from McLaren. Perhaps more impressive was the pace of the Ferrari as Leclerc stayed in the top six throughout, although he was unable to prevent a resurgent Perez taking fifth from him just as Hamilton and Verstappen went wheel-to-wheel.

Seventh went to Ricciardo to give McLaren a strong start – the Australian fading a little as the race went on – while Carlos Sainz similarly couldn’t quite match his new team-mate after losing a few positions at the start and came home eighth. But Perez and Verstappen weren’t the only drivers providing late action, as Tsunoda’s debut finished on a high with a last-lap move on Stroll to take ninth.

When the dust – or sand – settled, it was a familiar podium, but the energy on it was so much different. Hamilton celebrated wildly after showing so many more of the skills that have made him the most successful driver of all time, and Verstappen rueing a win that got away.

Contrasting emotions from the two title favourites, and that’s certainly no bad thing. After years of largely processional opening races in Melbourne, what Bahrain has done is made the prospect of a season-long battle even more exciting. It was just the start that F1 needed. 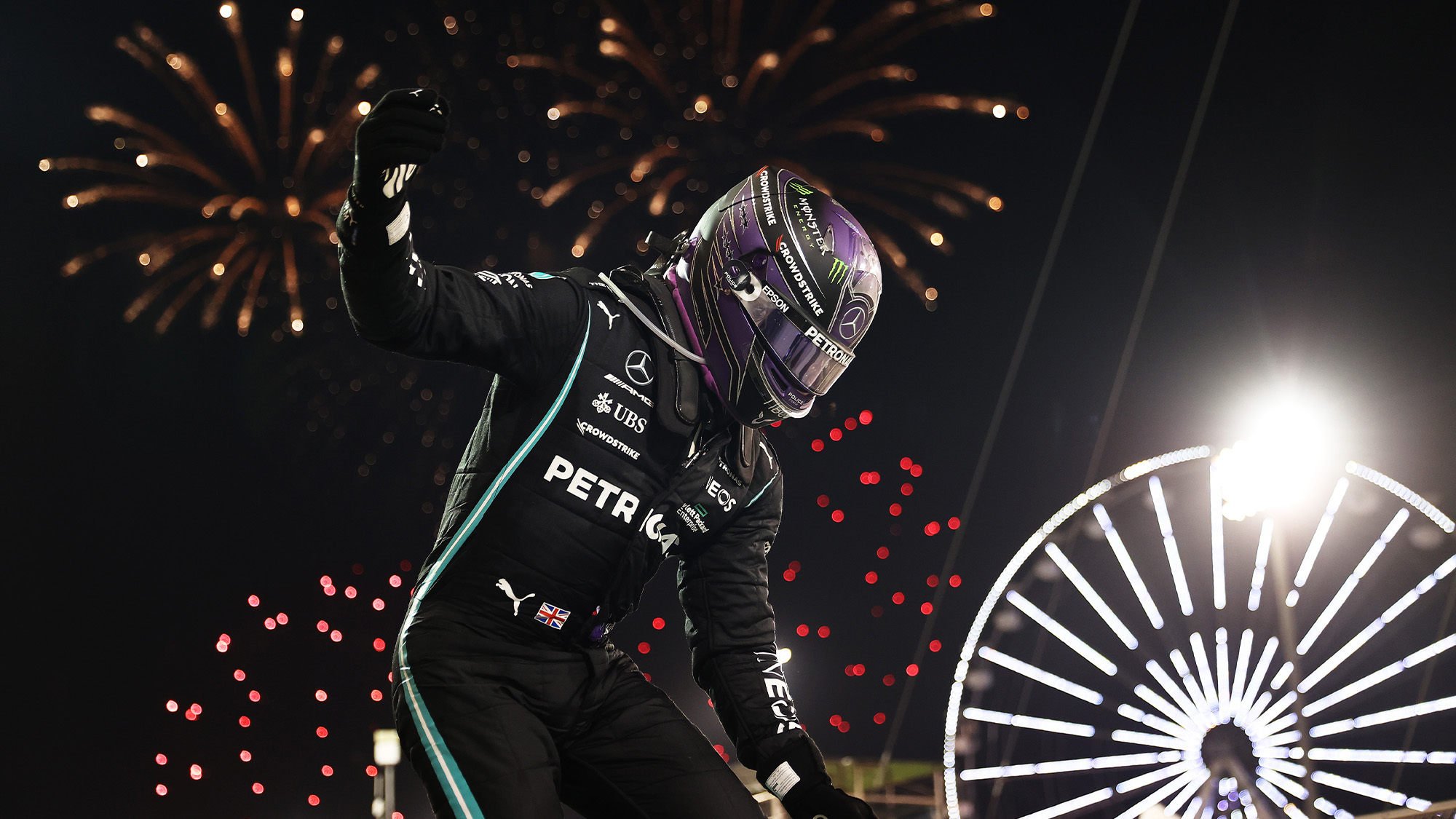