In 2007 the Paulistas had embraced Lewis Hamilton – a mixed-race tyro chasing the F1 championship in a mixed-race city – but one year on attitudes had changed. He was in title contention again, but this time up against Felipe Massa, a son of São Paulo. 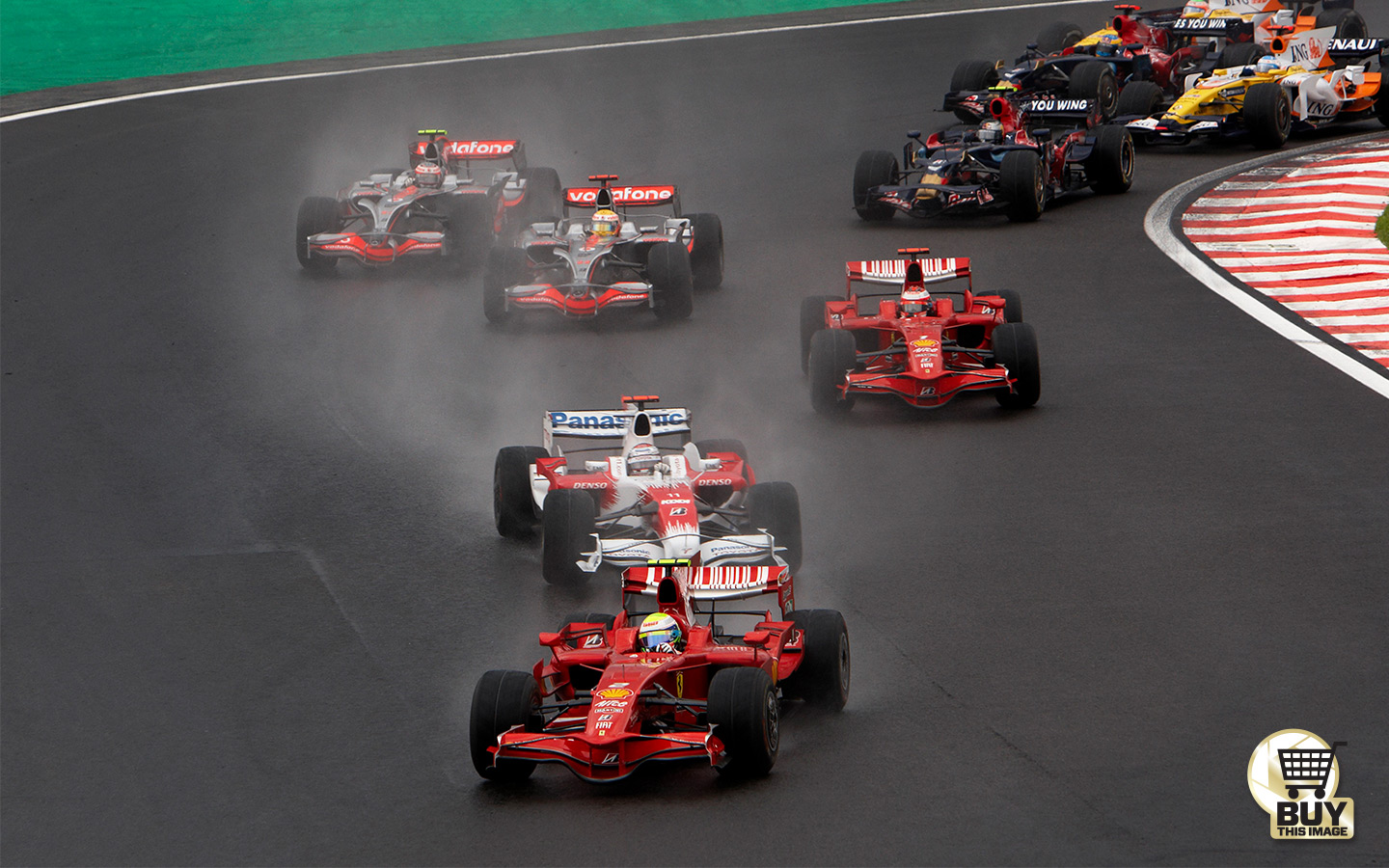 One of Hamilton’s pre-race functions was hijacked by local pranksters. They threw him a toy black cat, a symbol of misfortune in Brazil. Hamilton was unfazed. “Where I come from,” he said, “black cats are lucky.”

The Englishman led the standings prior to the race – and fifth place would suffice to take the title. Massa needed to win and cross his fingers, but qualified on pole with Hamilton back in fourth. Fuel weight was a factor back then – and the Brazilian had been so swift that McLaren wrongly assumed he must be on a three-stop strategy…

Sunday’s forecast was unsettled, but rain held off until just before the scheduled start and the race was put back by 10 minutes to fit wets. BMW left Robert Kubica on dries, against his wishes, and he peeled in at the end of the formation lap to change.

Massa led away from Jarno Trulli (Toyota), Kimi Räikkönen (Ferrari) and Hamilton, but David Coulthard’s final GP was soon over, his Red Bull having been hit by Williams team-mates Nico Rosberg and Kazuki Nakajima. Nelson Piquet then flew off at Turn Three and the race was neutralised.

Force India put Giancarlo Fisichella on dry Bridgestones during the interlude – and within a couple of laps of the restart he was quickest, which prompted everybody else to change. McLaren left it late keeping Hamilton out until lap 11 – about two too many. That dropped him to seventh, although he was soon back up to fifth and driving a controlled, if subdued, race.

Massa made his final stop on lap 38, continuing to lead from Fernando Alonso, Räikkönen, Hamilton and Sebastian Vettel, whose Toro Rosso became ever more of a thorn in the McLaren’s sidepod. Then, with 10 laps to go, the rain returned.

By lap 64 almost everybody had plumped for wets, but Toyota left its drivers out – and that promoted Timo Glock to fourth. With two laps to go Vettel pushed Hamilton down to sixth and the balance of power shifted. “I didn’t know what position I was in,” Vettel said, “and had no idea I might be influencing the championship.”

The rain had intensified when Hamilton began the final lap: he was 0.754sec behind Vettel, 13.144sec adrift of Glock. As Massa finished comfortably clear of Alonso, he punched the air cautiously and awaited information. Half a lap behind, Vettel and Hamilton were approaching Junção – the final corner before the uphill blast to the flag – and closing on Glock, whose dry tyres were hopeless in the now ferocious downpour. “It was almost impossible to stay on the track,” Glock said. “I had no idea who was behind me and didn’t see where Lewis overtook.” He had the best view in the house but missed 2008’s most critical moment.

“When I crossed the line the positions meant I was going to be champion,” Massa said, “but then I was told Lewis had passed Glock. That’s racing, though. There are always explanations for what happens in life and if things worked out like this today, it’s just the way it was meant to be.”

He had been the afternoon’s outstanding performer, on and off the track. SA 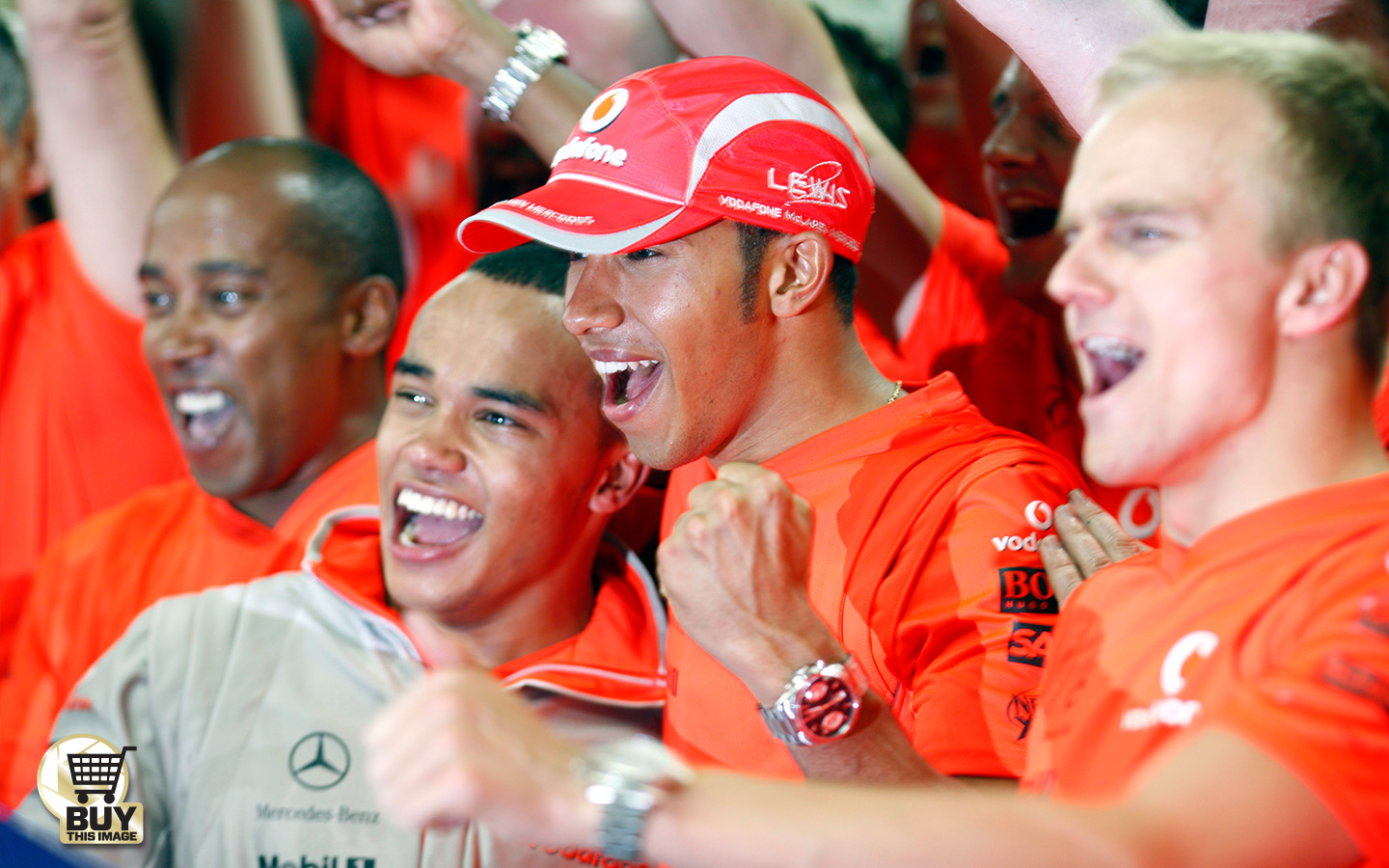 Hamilton celebrates with his brother Nicolas and Heikki Kovalainen