Though turbos were stripped back by Formula 1 regulations in the late ’80s, McLaren and Honda still managed to squeeze the most out of them. The latest installment of ’80s month, in print and online 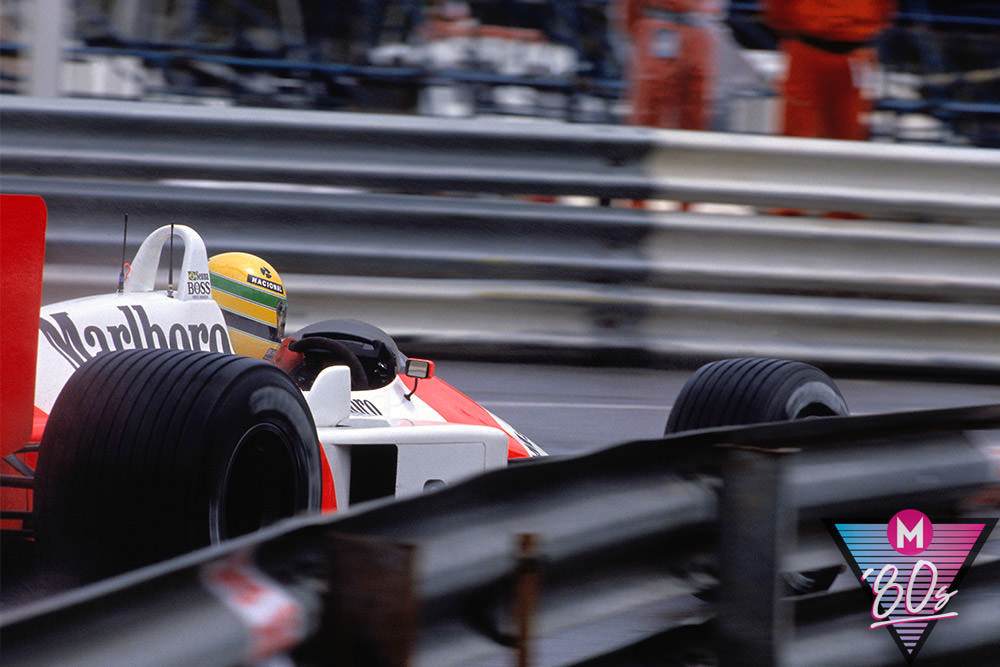 Back in the mid-80s the governing body realised that the escalating power of the electronically-controlled turbocharged engine was getting way out of hand. It needed to find a way of bringing power down to more sane levels, but without annoying the car manufacturers who had recently brought unprecedented wealth to Formula 1. So, to give everyone time to prepare, and allow any investment to be phased predictably, a four-year glide-path was set out that progressively neutered the turbos, ready for the blanket standardisation in 1989 of the normally-aspirated 3.5 litre motors that were allowed alongside the turbos from 1987.

That glide path for the 1.5 lt turbos looked like this:

The most swingeing of those regulations came in the final year of 1988, with massive reductions in both permitted boost and fuel usage. When initially announced, it was believed this would be so prohibitive it would render the turbo uncompetitive and bring the new naturally-aspirated era in one year early. But that was to misjudge the pace of progress – and specifically just how on top of the game Honda was by this time.

It may seem difficult to believe from the perspective of Honda’s current F1 struggles, but back then it was the absolute master of F1 power units, in much the same way that Mercedes is today. Its technical team in Tochigi looked carefully at whether it might be possible, within such tight restrictions, to adapt its turbo V6 to still give a competitive advantage over the 3.5 lt engines in 1988, the best of which were making around 600bhp, with no fuel restriction. It decided it could. So too did Ferrari.

Limited to 4-bar and 195-litres in 1987, the Honda V6 had delivered 1010bhp at 12,000rpm when in the back of the Nigel Mansell’s Williams FW11B or Ayrton Senna’s Lotus 99T. Just scaling down from 4-bar boost to 2.5 implied a reduction to 630bhp – and that was without figuring in the reduction in fuel supply, which would have taken it down to maybe 610-615bhp, hardly any more than the 3.5 atmos and with a bulkier package that needed more cooling.

But both Honda and Ferrari reckoned they could better that with some reconfiguring and that the turbo 1.5 would still therefore offer a competitive advantage. They were right – though Honda was much more resoundingly so than Ferrari and enjoyed what remains the most successful F1 season of all time for any engine manufacturer.*

After powering the McLaren MP4/4s of Ayrton Senna or Alain Prost to victory in all but one of the races in the 1988 world championship, Honda released an SAE technical paper (number 890877) on the RA-168E motor that gave some insight into its thoroughness in creating an almost all-new engine despite this being the final year of the formula, regardless of it working flat-out on the new atmo V10 3.5 litre for 1989. Ferrari’s re-engineering of the 4-bar engine to meet the 1988 regulations was nowhere near as exhaustive.

Honda’s technical team – under the directorship of Osamu Goto – retained the 80 degree angle of the V6 cylinder block but changed virtually everything else. The cylinder bore size was reduced from 82mm to 79mm to give a much smaller combustion chamber as there was no longer going to be enough fuel to properly fill the old size. This, of course, implied a correspondingly longer cylinder stroke to retain the same 1.5 lt capacity, meaning a quite different block. The smaller combustion chamber also made it more feasible to increase the compression ratio in an attempt to begin clawing back in revs what it had lost in boost. It jumped from 7.4:1 to 9.4:1, helping it run to a maximum of 14,000rpm compared to the big-bore 4-bar’s 12,000rpm. It featured flat piston tops, the reduction in crown minimising the heat build-up. Relatively small valves did the same and helped with fuel economy. With so little fuel to play with, Honda strove hard to increase the thermal efficiency to the maximum and internal cooling was a crucial part of this. Particular attention was given to cooling around the valve area and each side of the block had its own water pump. Water galleries were welded outside the cylinder block walls so as to absorb less heat, then switching to the inner walls on the cylinder head where temperatures are higher. The resultant cool-hot-cool flow brought more uniform temperatures, negating hot spots. Between the fuel pump and the injectors there was a heat exchanger that pre-warmed the fuel – the greater atomisation giving a more explosive mix for a given quantity of fuel. Combustion consistency (and therefore efficiency) was a key target as a standard problem with a high boost/high revs combination is unstable combustion or even misfiring. The high compression ratio and careful design of the intake ports and injection system gave the desired consistency. 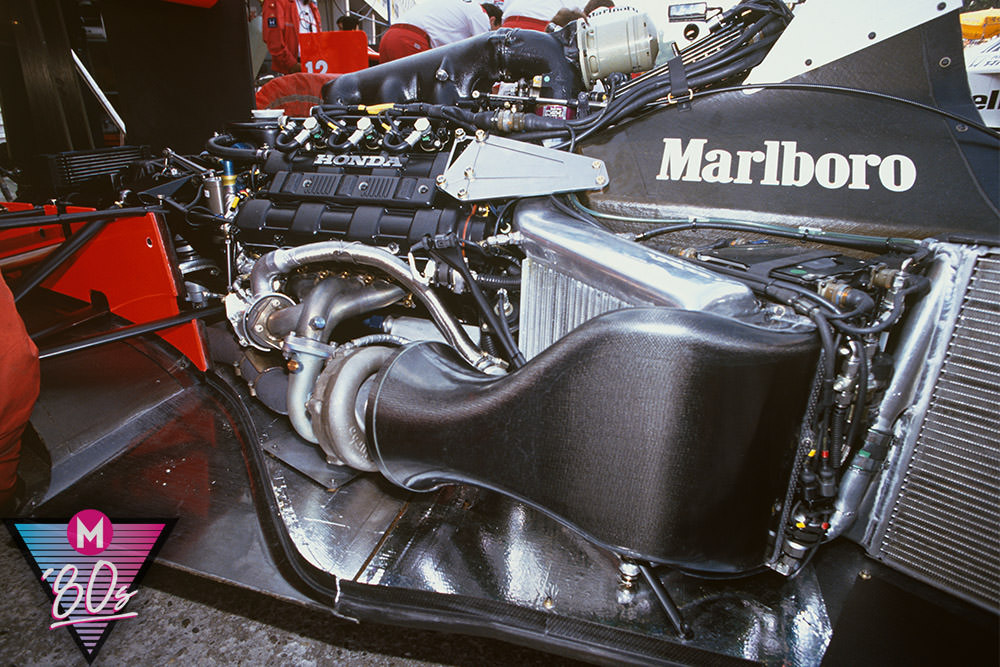 In all, it gave an engine with a 30 per cent thermal efficiency – way ahead of the competition and well ahead of the big-bore 4-bar 1987 motor. It began the year with a solid 640bhp in race trim, but this had risen to 685 by the season’s end, with over 700bhp available in qualifying (with no fuel restriction). It was a big reduction on the four-figure power numbers achieved in ’87, but crucially it was significantly more than that of anyone else.

Ferrari merely modified its 1987 engine, retaining the same cylinder dimensions. It increased the compression ratio by changing the combustion chamber and piston top shape, but the essential dimensions remained as before. Consequently, t didn’t gain anything like as much rotational speed – running to a 12,500rpm maximum, just 500rpm more than in ’87 and 1,500rpm down on the Honda’s. It could give comparable power to the Honda or comparable economy – but nowhere near, simultaneously. Although it could qualify with around 650bhp (well clear of the atmos), at the more fuel-demanding tracks Gerhard Berger and Michele Alboreto were sometimes having to manage with little more than 550bhp during the race.

Furthermore, the Ferrari was nowhere near as aerodynamically powerful, largely thanks to the McLaren’s step-up gearbox that had enabled Bob Bell to swoop the diffuser up far more boldly than was possible on the Ferrari. He was helped in this by Honda making a tiny but tough clutch that allowed the crankshaft to be lowered and relocating the oil pumps from the bottom to the side. The combination of significantly more power and more downforce than the only other comparable car gave the McLaren-Honda MP4/4 an advantage of around 1.5sec per lap over the next fastest. Even without Senna and Prost in its cockpit, it would have dominated. No driver was worth as much lap time as that.

All that said, the McLaren was a less aerodynamically advanced car than the March 881 that new boy Adrian Newey had penned, but that car had nowhere near the Honda’s horsepower, with its naturally-aspirated Judd V8.

Honda’s shock and awe approach to the final year of the turbo formula was at the heart of McLaren’s greatest season – and made for a fittingly defiant final hurrah for the 1980s turbo.

* (If we accept that the Cosworth DFV’s 100 per cent win record in 1968 and 1973 was not, strictly speaking, a factory programme despite carrying Ford badging and that Ferrari’s monopoly of the 1952 season was achieved in the F2 category).