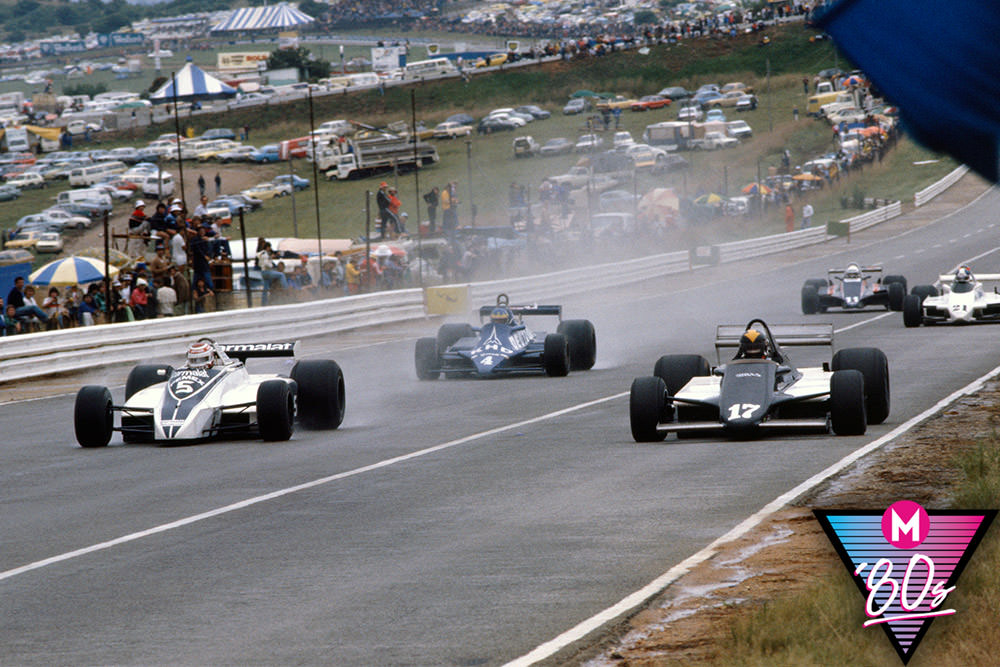 “What it boils down to really is that the technical trade and industry of the automobile world are accepting FIA control and rules, as they always have done, while those who make their living from motor racing are revolting.”

He’d had his fill of the ‘war’ in Formula 1 – and it would appear that he considered Bernie Ecclestone’s FOCA rather than Jean-Marie Balestre’s FISA to be ‘flying Messerschmitts’.

Peace had threatened on 19 January 1981 when Enzo Ferrari oversaw the Modena Agreement between the grande costruttori and assemblatori – yet within weeks Jenks would be winging to South Africa for a ‘pirate’ Grand Prix.

The season was supposed to have begun in Buenos Aires in late January but fears that national hero Carlos Reutemann might be prevented from competing by his revolting Williams team caused the race promoter to demur.

FISA acceded and the Argentine GP would eventually be held on 12 April.

But when it insisted that the South African GP be similarly postponed, Kyalami’s new owner stood firm – with FOCA at his back: it was either 7 February, a Saturday, as scheduled, or not at all.

The inference being that the World Federation of Motor Sport – announced in November – and its breakaway World Professional Drivers’ Championship was no idle threat.

It was a show of strength born of financial weakness.

Given the logistics involved – plus the fact that Goodyear had withdrawn its supply from European racing as of December – it was a final roll of the dice of the ‘Cosworth Brigade.’

Costruttori Alfa Romeo – despite a rumour that it might send a car for Bruno Giacomelli – Ferrari, Renault and Talbot-Ligier stayed at home while Britain’s assemblatori made the best of a bad job.

In fact they made a pretty good fist of it on unsuitable production Goodyears intended originally for the skirt-less cars of the Aurora AFX British F1 Championship and supplied by Ecclestone.

This rubber, however, would prove just the ticket for Reutemann.

The race started on a damp track and the pole-sitting Brabham of Nelson Piquet ran away with it initially.

The early laps provided spectacular action for a sparse 35,000 crowd but large TV audience – FOCA’s preferred dynamic – as those on wets scrambled past those who had gambled on slicks.

The Lotus and McLaren of Nigel Mansell and John Watson were foremost among the former and passed and repassed before experience got the better of exuberance.

The track, meanwhile, was beginning to dry.

World champion Alan Jones, having dropped from third to 10th because of a missed gear at the start, was the first to give up on wets on lap 17 (of 77).

Two laps later he spun at Marlboro (previously known as Crowthorne) Corner and damaged his Williams’ rear wing. He almost gave up there and then but resumed after disembarking to assess the damage.

Jones’ difficult day would end after 62 laps because of damaged skirts.

Reutemann in contrast was at his understated brilliant best having switched to slicks on the grid. The clouds were clearing and the track and race were coming back to him.

Piquet, searching for damp patches and hoping that rain would return, pitted from a shrinking lead on lap 27 – and Watson led for two.

The latter’s car, a horrible handful in the dry of Thursday, had shone in the rain of Friday – but even ‘Wattie’ had to concede that slicks were by now the trick.

His dice with the race’s surprise package would brighten the latter stages.

Keke Rosberg had qualified his Fittipaldi on the second row and started on slicks – only to lose time when a stop because of a suspected rear puncture turned out to be for a flapping exhaust cover compromising airflow to the wing.

The Finn resumed the struggle and did just enough to hang onto fourth. He had, however, been lapped by Reutemann.

The man from Sante Fe had almost been strangled by catch-fencing wire when he crashed on Thursday and admitted to feeling giddy. You would never have guessed it from his Saturday performance.

Piquet had charged to second place on fresh rubber but it was Reutemann who set the race’s fastest lap on lap 72.

‘Lole’ was sure, however, that he would receive no points for his effort.

This unsanctioned Formule Libre affair had proved two things: F1 was not F1 without Ferrari and that Fiat and Renault could not afford to miss out on TV exposure.

Renault in particular was desperate to race in America and the next GP was scheduled for Long Beach. So it leaned on compatriot Balestre.

FOCA’s unity would not last much longer but it had lasted just long enough.

The first Concorde Agreement was signed on 4 March and the United States GP West on 15 March was run to FISA’s rules.

Yet although the assemblatori had been forced to raise its skirts as well as use unfamiliar Michelin radials, and would immediately turn in on themselves – protesting the twin-chassis Lotus – it caught the grande costruttori with their trousers down.

Jones, Reutemann and Piquet finished 1-2-3 and F1’s new commercial rights-holder caught it all on camera and beamed it around the world – even to France.

Reutemann never did get his points and Piquet would beat him to the title by one.

That he did so in a car park in Las Vegas was irrefutable evidence – though the war was not yet over – that F1 had changed forever if not irrefutably for good.