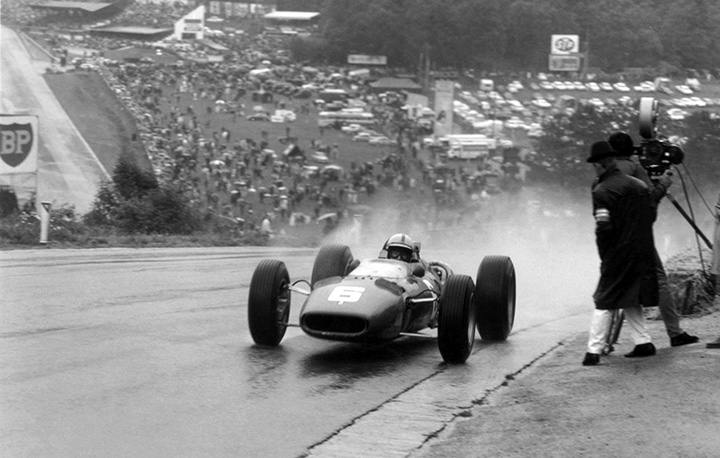 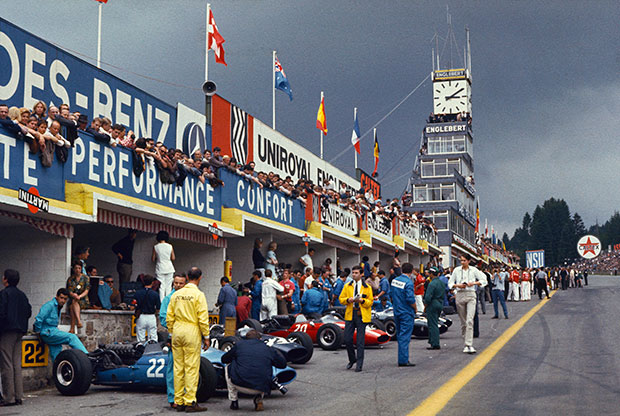 Friday and Saturday had been hot and sunny. Indeed, the latter’s practice session was delayed for 45 minutes by a forest fire above Burnenville. Sunday, however, dawned overcast and threatening.

Spa’s microclimate had everybody guessing on the grid. With reports of rain emanating from the far side of this ultra-fast 8.75-mile road circuit, John Surtees, his Firestone-shod Ferrari on pole position by more than three seconds, decided to make a late switch to proven Dunlop wets. A wise decision, as it turned out.

The opening lap was wilder, more surreal than anything Hollywood could have conjured up – director John Frankenheimer was busy here collecting footage for his Grand Prix film. The rain had swept across the circuit – and the engine in Jim Clark’s Lotus had already gone bang – by the time the field reached Burnenville. Caught unawares, seven cars were eliminated: Mike Spence (Lotus) and Jo Bonnier spun – the latter’s Cooper-Maserati left dangling precariously over a high brick parapet; Denny Hulme’s Brabham-Climax slapped into the back of Jo Siffert’s Cooper-Maserati; and the BRMs of Graham Hill, Bob Bondurant and Jackie Stewart spun at the Masta Kink. 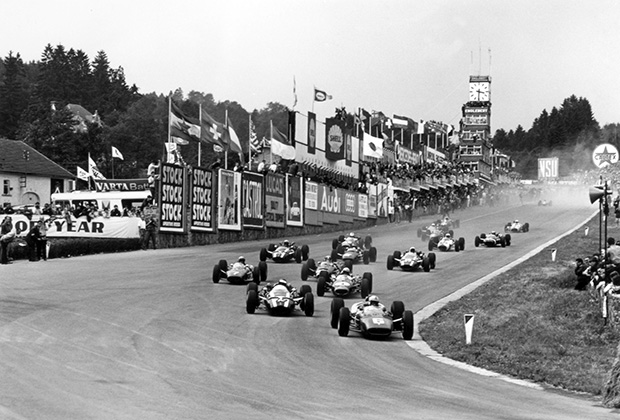 The latter struck a telegraph post, hit a cottage and was trapped in a car bent like a banana and fast filling with fuel. He had to be rescued by Hill and Bondurant, the former borrowing a spanner from a spectator to remove the steering wheel and free his team-mate after 25 nervy minutes. Stewart’s lucky escape – no thanks to the organisers – was the genesis of his controversial safety campaign. Being tended to by nuns and taken to hospital in an ambulance that got lost en route had opened his eyes, if not yet those of some others.

Jochen Rindt, an impressive second-fastest qualifier in the dry, was another to endure a monumental spin in the sudden downpour. He somehow avoided hitting anything at the daunting Masta Kink and by the fourth lap had forced his Cooper-Maserati past the Ferraris –a 3-litre V12 for Surtees and a 2.4-litre V6 for Lorenzo Bandini – into the lead. 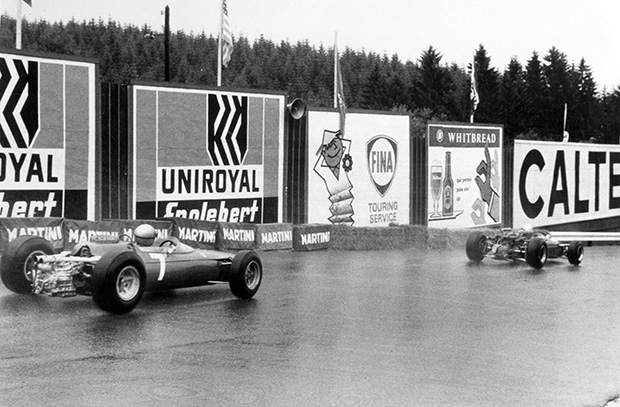 Surtees was content to play a waiting game and hung back just far enough to steer clear of Rindt’s hanging spray. As the rain began to ease, the Englishman increased the pressure on the precocious Austrian, whose limited-slip differential began to wilt under the increased forces exerted by a drying track.

From the Archive: “An Italian victory” by Denis Jenkinson (July 1966).

With four laps to go, Surtees made his move and pulled away relentlessly thereafter to score what would be his final victory for the Scuderia. His had been a calculating display of virtuosity and strategy. Not that Machiavellian team manager Eugenio Dragoni saw it that way. He complained that Surtees had let a rival team’s car lead for 20 laps. Rightly incensed, Surtees hit back. When the meddlesome Dragoni again undermined him at the following weekend’s Le Mans 24 Hours, he walked out, never to return. PF