And to mark Prost’s special day we have picked out five of what were even his most impressive races.

Prost was a revelation in 1981, with his promotion to Renault. He took his first F1 win – an opportunistic one in unusual circumstances – at Dijon.

Yet it was in win number two at Zandvoort that he underlined his sheer all-round ability. Prost was faultless under the most pitiless pressure.

He had already shown his steel a couple of rounds earlier, at Hockenheim, for several laps holding off the insistent Alan Jones in his Williams, often wheel-to-wheel. Jones nipped by in traffic that time. In the Netherlands they reconvened, with a different outcome.

Prost led from pole and Jones quickly moved by Prost’s team-mate René Arnoux into second place. But dislodging the other turbocharged Renault was another matter. Lap after lap Jones swarmed all over the leader, often got alongside, but Prost wouldn’t budge. “He may be a bit dull and unexciting to talk to but he’s a hard nut,” was Denis Jenkinson’s assessment for Motor Sport.

Only briefly did Jones prevail, as he passed, again among backmarkers, onto the pitstraight. But Prost startled Jones by immediately diving to his inside at the subsequent Tarzan hairpin then sitting it out to reclaim a lead he didn’t lose.

The 1986 season is Prost’s crowning glory, and with reason as even now it is perhaps the last F1 drivers’ championship won not in the best car. It had a fitting final act in Adelaide.

A fratricidal squabble at pacesetting Williams, plus Prost’s skills, meant he went to the final round with a title chance. Yet Nigel Mansell needed only third place for the crown.

And Prost’s chance got slimmer when on lap 32 of 82 he punctured while well-placed and lost a load of time. “After that,” Prost noted, “all I could do was push as hard as possible. There was nothing to lose – even second place was no use to me.”

He clawed Williams’ title protagonist pair in, and the day suddenly turned back his way. Mansell was eliminated in that most iconic of F1 images, his tyre blowing out in a shower of sparks. Then Mansell’s stablemate Nelson Piquet pitted for tyres as a precaution.

This didn’t leave Prost on easy street, as his fuel computer long said he was five litres short to make the finish. “I just had to hope it was wrong,” Prost said. This time, fortunately for him, it was.

We often do Prost a disservice. He is synonymous with driving calculation but, as one Australian observer put it, while he had the head of Jackie Stewart, he also had the right foot of Gilles Villeneuve. Never better was this demonstrated than in F1’s first Suzuka visit, in 1987.

Running second on lap two, Prost suffered a puncture. “By the time he had limped back round to the pits and changed the offending left rear tyre, he was two laps down,” Alan Henry explained for Motor Sport.

“He resumed to charge back into contention, making up one of those laps on the entire field by the finish and consistently lapping a second faster than any other car on the circuit.” Prost’s fastest lap indeed was some 1.7 seconds faster than the next best of anyone.

It was only good for seventh and no points. But, as Gilles would also attest, points and wins aren’t everything. “His Japanese performance was one of the drives of the year,” Henry continued. “It was a truly momentous piece of driving, produced for no other reason than self-respect on the part of the McLaren team leader.”

This race is recalled usually for Mansell’s stunning outside pass of Gerhard Berger. But, undemonstratively as always, Prost that day did something as remarkable. Far ahead of those providing the fireworks.

After a qualifying nightmare Prost started 13th, his lowest starting slot for seven years. But his race day set-up genius and gentle touch on the tyres remained. And on Sunday he ghosted forward typically and got onto his Ferrari team-mate Mansell’s tail, who was running second.

Still it looked that was as far as they’d get, as for two-thirds of the way this race had every sign of a typical Ayrton Senna and McLaren-Honda demonstration.

Then suddenly the deficit to Senna fell. It transpired he had a slow puncture, while Prost noted his own car “got better and better”. He slipped past Mansell in traffic and ate the gap to his nemesis.

“By lap 60 the writing was on Senna’s wall,” said David Tremayne for Motor Sport. “He and Prost passed the pits nose to tail and going into turn one Alain pulled out from behind and went calmly into the lead. His 41st win was only laps away.” 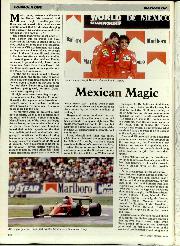 Motor racing broke out in Mexico at the Grand Prix weekend, and now I begin to realise just why those who witnessed it first hand were so ecstatic about that…

Donington Park 1993 is a familiar tale. The following act, however, confounded it.

Conditions had changed little from Leicestershire for the subsequent race at Imola, with a damp track for the start. “Knowing observers predicted another disaster for him [Prost],” noted Tremayne. “‘Senna weather,’ they said.” And they no doubt felt vindicated as Williams team-mate Damon Hill and Senna swept past Prost immediately.

But this was no Donington repeat, as Prost quickly attacked second-placed Senna and, after a few laps of typical Senna defence, clean accelerated by him out of Tosa hairpin.

“This was when Prost’s set-up experience also came into play,” Tremayne continued. “Prior to the race there had been a half-hour acclimatisation session because of the rain, and he’d changed his FW15C slightly. ‘After that it was fantastic in traction,’ he enthused.”

Senna got back ahead by stopping for slicks first, and after Hill pitted the trio were together. Senna attacked a defensive Hill at Tosa for the lead. Prost hung wide on the entry then accelerated past the pair of them at the exit, nicely blocking Senna behind Hill. He was never seen again, and nursed a sticking throttle to victory.