Damon Hill is often credited as the first second-generation Formula 1 world champion. But while Hill’s title in 1996 certainly made him the first champion son of a champion, there were plenty of others before him who successfully carried the torch in the ‘family business’. Alberto Ascari was an early example who walked in the paternal shoes of leading pre-war Alfa Romeo hero Antonio to win for Ferrari in 1952-53. And 40 years ago this week, another chip off the old block rose to the summit, when he clinched the 1980 world championship in dramatic fashion in Montréal.

Like so many sons and daughters of famous parents – indeed, just like Damon Hill – Alan Jones never had it easy as he clawed his way to the defining professional achievement of his life. Stan Jones certainly inspired his son as he lit up the thriving Australian national scene of the 1950s and gave him a Mini-sized leg-up to get him going, but the old man must have been tough to live with (and up to). Jones once described his father as an “aggressive, stocky little bloke” – the apple clearly didn’t fall far from the tree – as Stan’s weekend adventures while running a successful Holden dealership sparked the boy’s imagination.

Stan Jones was something of an Aussie hero in that first post-war decade, rising to prominence in a characterful Maybach Special in which he won the 1954 New Zealand Grand Prix at Ardmore, and later in a Maserati 250F, chassis 2520. He wrapped the ex-Moss car around a tree at Albert Park in November 1956, but won the Australian GP (very much non-championship back then) at Longford in 1959. But the Maserati was soon obsolete, Stan selling the car at a significant loss (c’mon, he had no way of knowing…), to go for an in-vogue Cooper Climax that his lad would borrow on occasion.

But after the bright days of the 1950s, the Jones family went through it in the following decade when the business failed. Stan could have joined Jack Brabham and Bruce McLaren on their odysseys to Europe, but his business and family had kept him Down Under. Now his boy made the big journey instead, first in 1967 for fun and adventure, then in 1970 with a single-minded purpose. Alan arrived in England with £75 in his pocket.

It never ceases to amaze how racing drivers of that generation had to scrape and cajole their way to eke out opportunities, with little idea what they were doing. It could have gone either way – more likely wrong than right. Instead, the Alan Jones story is one of the best and most unlikely rises. The ubiquitous route took him through Formula Ford (Merlyn), Formula 3 (Lotus 41 – and a broken leg at Brands Hatch), before a works GRD drive in 1973 lit the blue touchpaper. What a shame then, that Stan missed the best bits. Jones Sr died in March of that year from a succession of strokes just before his boy became an F3 race winner and eventual series runner-up to Tony Brise.

Even now, Alan appeared a long-shot for any sort of significant racing career – even if those who looked closely could see a potent natural talent combined with the necessary belligerence that was perhaps a national, as much as a family, trait. Harry Stiller spotted the mix and gave Jones his F1 break in a Hesketh (seventh on his debut at Silverstone’s International Trophy in 1975), but the tough resilience instilled by the old man also made Jones his own man. No surprise he clashed with F1 ‘big beasts’ Graham Hill and John Surtees when he drove for both, as substitute for the injured Rolf Stommelen for the former (fifth at the Nürburgring), and in a car sponsored by prophylactic brand Durex for the latter (oh, the sniggers and outrage). Jones felt lost by 1977 and was almost tempted to go home.

Then poor Tom Pryce collided with that ill-fated marshal and the fire extinguisher he was holding, at Kyalami. How cruel, how strange, how twisted motor racing can be. From such horror, Jones had a new F1 foothold as he replaced Pryce at Shadow. In partnership with a returning Tony Southgate, they tuned the DN8 into an instrument Jones could play – with feeling. A rain-affected victory in Austria – a year after John Watson’s for Penske and two after Vittoria Brambilla’s for March, completing the hat-trick of unlikely rookie wins at the Österreichring – surprised everyone, including the organisers, who had ‘mislaid’ their copy of the Australian national anthem for the podium. Jones would recall an apparently drunk man playing it on a trumpet. It didn’t matter. AJ was on his way.

He could have driven for Ferrari, and even signed a contract, before Gilles Villeneuve was snapped up in his place. But it was just as well. Instead, he’d throw his lot in with Frank Williams, who had one last hand up his sleeve after the failure of his partnership with Walter Wolf. Frank never did like sharing control – except, that is, with his new kindred spirit. Patrick Head, co-founder of the freshly minted Williams Grand Prix Engineering, was the key Frank had unwittingly being looking for throughout the decade. Together, these two would build something magical – with Jones as their talisman. 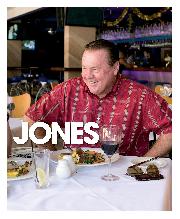 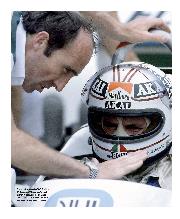 Scroll down the roster of drivers who won a single World Championship – names like James Hunt and Jody Scheckter, Nigel Mansell and Damon Hill – and for each there’s…

Williams was perfectly formed in 1978, hewn into uncompromising granite by a rare and potent alchemy. Hell, Jones and Head even looked like brothers. Williams spent the next 40 years trying to recapture such a brew – and there’s an argument they never quite found it again, despite the roster of heroes who would pass through their cockpits.

Armed with Head’s neat, logical, Wolf-influenced FW06, Jones began to shine. But for all the promise, he was lacking something – which he discovered when he tested Head’s new FW07 in a secret run-out at Ontario Motor Speedway after the Long Beach GP in ’79. So this was ground effects. No wonder Mario Andretti and Ronnie Peterson were so hard to live with.

The FW07 was the car the Lotus 80 should have been: a properly engineered and perfected version of the all-conquering 79 (copying, in one form or another, has always been a core F1 trait). At Silverstone, Jones qualified on pole, sixth-tenths faster than Jean-Pierre Jabouille’s turbo Renault – all with a supposedly humble Cosworth DFV – but in the race, a new weld on the water pump cracked and the leak led to a piston failure. Team-mate Clay Regazzoni picked up the pieces to deliver Frank his sweet breakthrough. But for Jones, the cork was out of the bottle despite the disappointment. He’d win four times that season, in Germany, Austria, Holland and Canada – too late for the title, but notice was duly served for 1980.

Five wins and five other podiums would carry him to glory, and Williams to a first constructors’ title. But in Montréal 40 years ago, it almost slipped from his grasp thanks to pesky Nelson Piquet, who arrived in Canada a point ahead. He took pole too, only for the pair to collide at the first corner and trigger chaos down the field. What a proper rivalry this was, full of vinegar. Even after the restart, Piquet in his spare Brabham looked unstoppable – only for an engine failure to scupper it all. For Jones, was this destiny? It seemed that way. Even leader-on-the-road Didier Pironi was swept aside, penalised a full minute for jumping the start. Jones had his title, then won brilliantly after a stirring comeback drive at Watkins Glen to cap a title he would barely have imagined when he left Australia 10 years before.

Boy, even the old man might have had a kind word after that one.