Alexander Albon will compete in the 2021 Deutsche Tourenwagen Masters (DTM) championship in tandem with his Red Bull reserve driver role.

The Anglo-Thai driver will take part in races that do not clash with his Red Bull duties with backing from the Formula 1 team.

Red Bull announced last month that Albon would be replaced by Sergio Perez for the upcoming F1 season after a difficult year alongside Max Verstappen.

Albon achieved just two podium finishes in 2020 and finished seventh in the drivers’ championship, 109 points adrift of his team-mate, on 105.

DTM will transition from sports cars to a GT3 format without driver swaps for the 2021 season in efforts to attract more manufacturers to join the series. 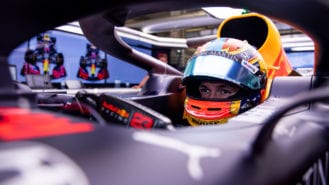 Where did it go wrong for Albon? The drives that cost him his Red Bull seat

Wind back to September 2019 and Alex Albon's arrival at Red Bull was a shot in the arm for the team after the struggles of Pierre Gasly. An engine penalty…

Though the format will remain much the same with two sprint races per weekend of 55 minutes plus one lap, rolling starts will replace standing starts for each race.

Fellow Red Bull junior Liam Lawson is also set to compete in the DTM series when applicable alongside his potential Formula 2 duties this season.

Lawson finished the 2020 F3 championship in fifth position and claimed three race victories across the year, and is expected to make the step up to F2 in 2021.

The 18-year-old took part in the post-season Bahrain F2 tests with Hitech GP, though any race deal with the team is yet to be confirmed.

There is yet to be any confirmation on which teams either driver will compete for in DTM.

“The DTM with a high-class field and GT3 sports cars is an interesting platform and a real challenge, both for successful race drivers like Alex Albon as for our Red Bull junior driver Liam Lawson,” head of Red Bull driver development Dr Helmut Marko said.