If, as big boss Sergio Marchionne has suggested, Alfa Romeo returns to Formula 1 to act as Ferrari’s feeder team, the wheel will have turned full circle.

For it was Alfa that set Enzo Ferrari on the path to glory via his privately funded – by commercial sponsors and pay drivers – Scuderia: the blueprint for the modern F1 team.

Having made himself useful in lots of little ways to the Milanese marque, this failed Grand Prix driver set up on his own – with Alfa’s tacit support – in late 1929.

In this way the manufacturer could claim the kudos of victory while dodging the flak of defeat.

Indeed, Società Anonima Scuderia Ferrari, flexible and fast to react, was its official representative from 1933-’37.

When the works seized back total control – a swoop that included the voiturette that would become the dominant Alfetta – it confirmed to Enzo, thoroughly miserable and soon out of favour, that he was not cut out to be an employee.

It also made him realise that, for all its resources and mythic status, Alfa Romeo could no more guarantee success than could he.

Between them, however, they have had their moments – many of which have lived long in the memory to help span the long absences from the highest level of one of the most evocative motorsports brands. 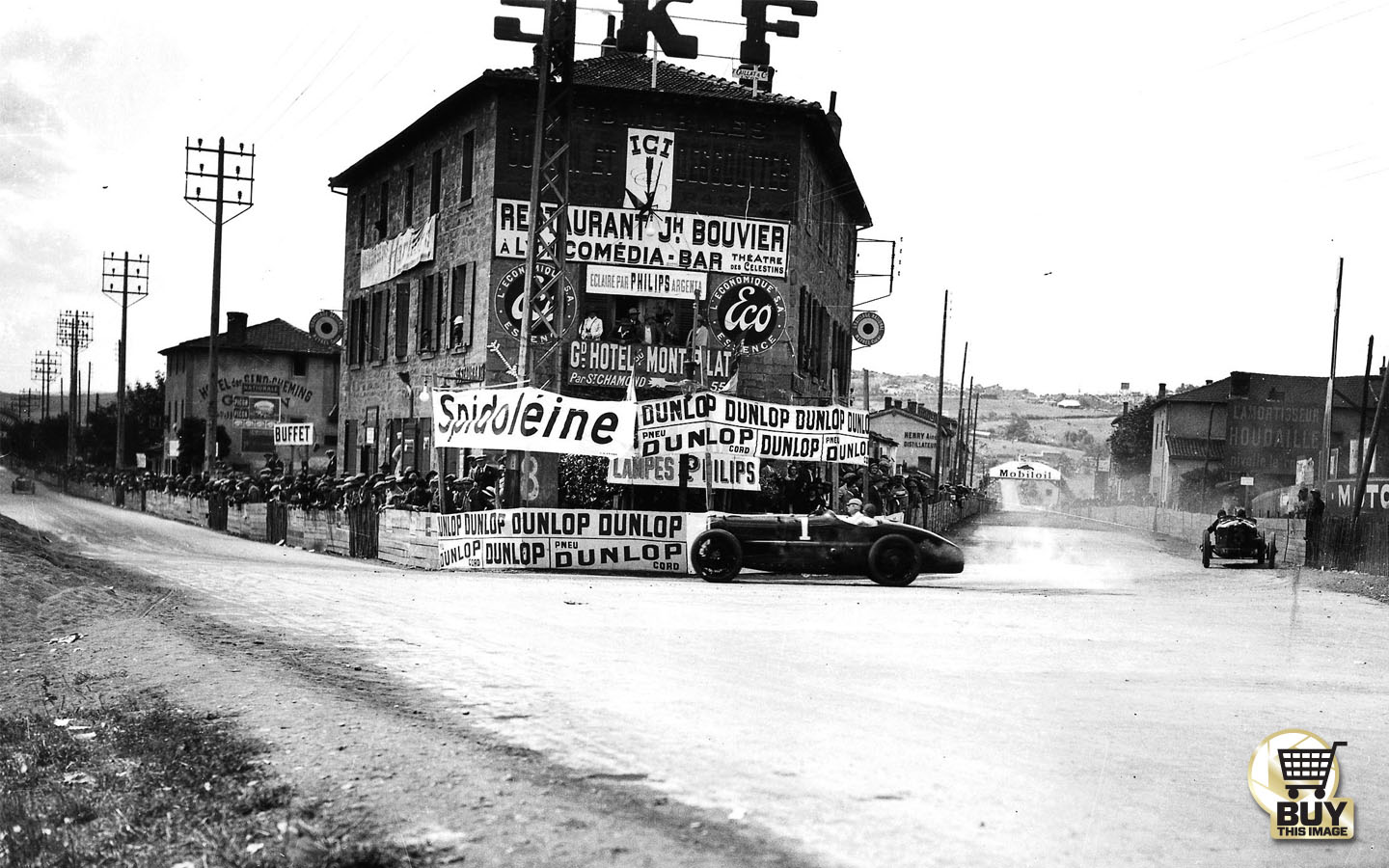 The high point of 1920s motor sport occurred at Lyon in southeastern France on 3 August. Twenty cars, representing the best of Britain, France and Italy, took the rolling start, and though Sunbeam’s Henry Segrave and Fiat’s Pietro Bordini led the early stages, they were pressured and outlasted by the great Vittorio Jano’s first design for Alfa Romeo.

The P2s of Antonio Ascari and Giuseppe Campari seemed set for a 1-2 when the former’s cracked its cylinder block in the closing stages. The third team car of Louis Wagner finished fourth – behind the V12 Delages of Alberto Divo and newcomer Robert Benoist – while the fourth stood silently by, its driver absent, citing illness; Enzo had flunked his audition to become a GP driver.

The 2-litre GP formula, created in 1922, had peaked – trendsetters Fiat had withdrawn and Sunbeam throttled back – by the time of the inaugural world championship (for manufacturers only). Ascari won the Belgian GP at Spa with embarrassing ease – by more than 20 minutes from Campari – and would have won the French round at Montlhéry had he not crashed to his death while leading.

Alfa regathered and clinched the title with another 1-2, at Monza, Florentian nobleman Count Gastone Brilli-Peri this time heading Campari.

With nothing more to prove, and a 1.5-litre GP formula looming, Alfa promptly withdrew.

Team manager Ferrari warned that a modified P2 would be too powerful and fast for this rugged road race through the Sicilian mountains – but Achille Varzi had a point to prove after his recent Mille Miglia defeat to team-mate and former ‘bike rival Tazio Nuvolari.

He led from the off and broke the lap record by almost 4min, but struck trouble – and lost the lead to Bugatti’s Louis Chiron – when his spare wheel came adrift and split the fuel tank. His riding mechanic grabbed a can of fuel at the final pit stop and attempted to refill on the move – with inevitable consequence at speed on a bumpy road. Varzi, however, ignored the flames at his neck to beat Chiron, who had slid off the road, by 1min 50sec.

‘Wildman’ Nuvolari, having plumped for the sensible option of a 6C 1750 sports car, finished fifth, almost 18min in arrears after coping with a broken road spring.

The world’s top two drivers in by far its best car, Jano’s P3: the first fully resolved single-seat GP car. Tazio Nuvolari was ‘Senna’ to Rudi Caracciola’s ‘Prost’ in a season of salted success but peppered with gesticulation, miscommunication and ill feeling.

At Monaco – P3s not yet ready – Caracciola, his two-seat Alfa 8C Monza sticking out like a sore thumb in German white, let the hobbled Nuvolari, the long-time leader, win and later said that he thus gained acceptance within the team.

But he did he really hold back and was he really accepted?

Nuvolari won on the P3’s debut in the Italian GP at Monza – where ‘Caratsch’ was denied the car – and ignored team orders, passing Caracciola for the lead, and refused to stage a 1-2-3 demo finish in the GP de l’ACF at Reims.

At the Nürburgring for the German GP, local hero Caracciola again led, more convincingly this time, but once more Nuvolari defied the team and had his nose in front at the time of his pitstop – only to be apparently deliberately delayed by his mechanics.

His compensation was the European championship (for drivers only). 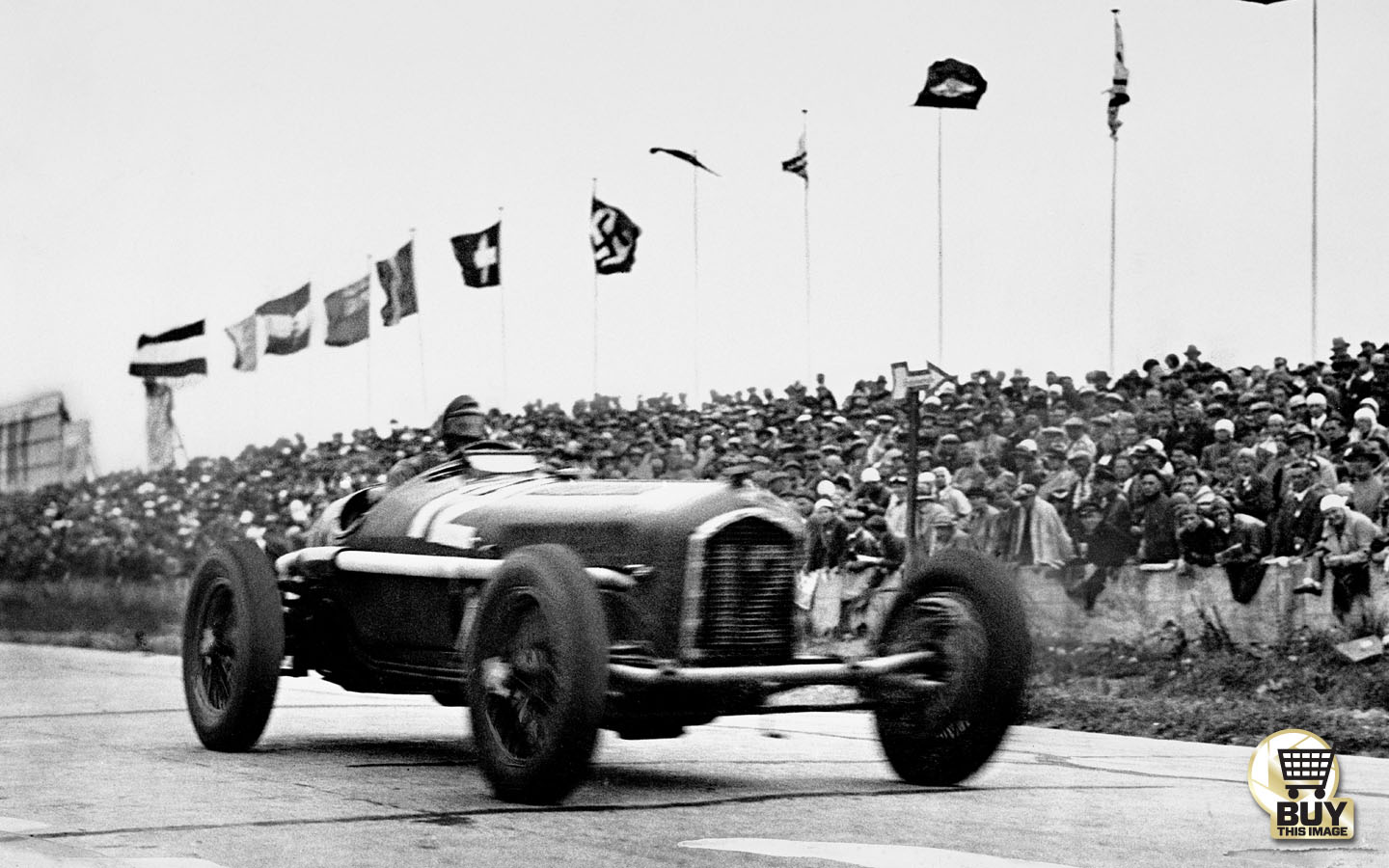 … This Nuvolari win against the odds, however, is less well known.

After his 12-cylinder Alfa broke its rear axle at the start in Livorno, he ran to his pit to demand another car. And he didn’t want another of Jano’s V12s, thank you! – he wanted an older, less-powerful but more wieldy straight-eight 8C-35 model. And if he didn’t get one he would leave the team forthwith.

Carlo Pintacuda handed over his after three laps and Nuvolari set off in chase of the Auto Unions of Varzi, Hans Stuck and Bernd Rosemeyer: Stuck thwacked a kerb on the third lap and retired; Rosemeyer, fretting about his aviatrix wife’s concurrent record attempt, withdrew after six; but Varzi led until lap 18 (of 30) before bowing to the inevitable – and pitted immediately to investigate brake problems after being passed by an inspired Nuvolari. 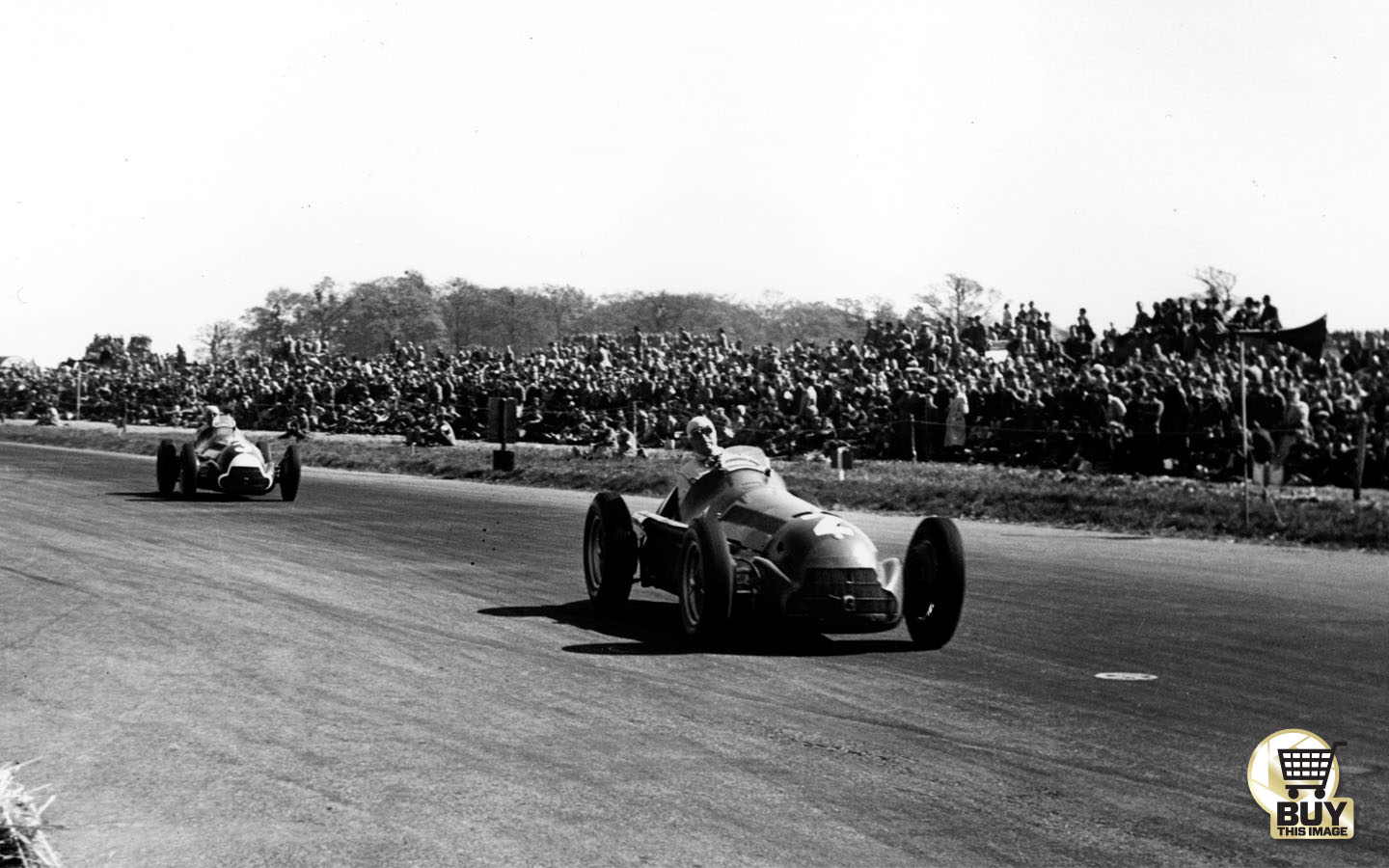 Giaocchino Colombo’s already proven Alfettas emerged from hiding – in a cheese factory! – to dominate GP racing of the immediate post-WWII period in the hands of Varzi and Jean-Pierre Wimille. Sadly both had been killed in accidents by the time of the launch of the world championship (for drivers only). So it was the Three Fs – ‘Nino’ Farina, Luigi Fagioli and Juan Manuel Fangio – plus guest driver Reg Parnell who put on a show for a huge crowd at Silverstone on 13 May.

Their display got somewhat heated, however, and Fangio was right on leader Farina’s tail in the closing stages when he clipped a straw bale. The Argentinian retired with a broken con-rod not long afterwards, restricting Alfa to a 1-2-3, with Farina finishing ahead of Fagioli and Parnell.

The best of the rest had been lapped. Twice. 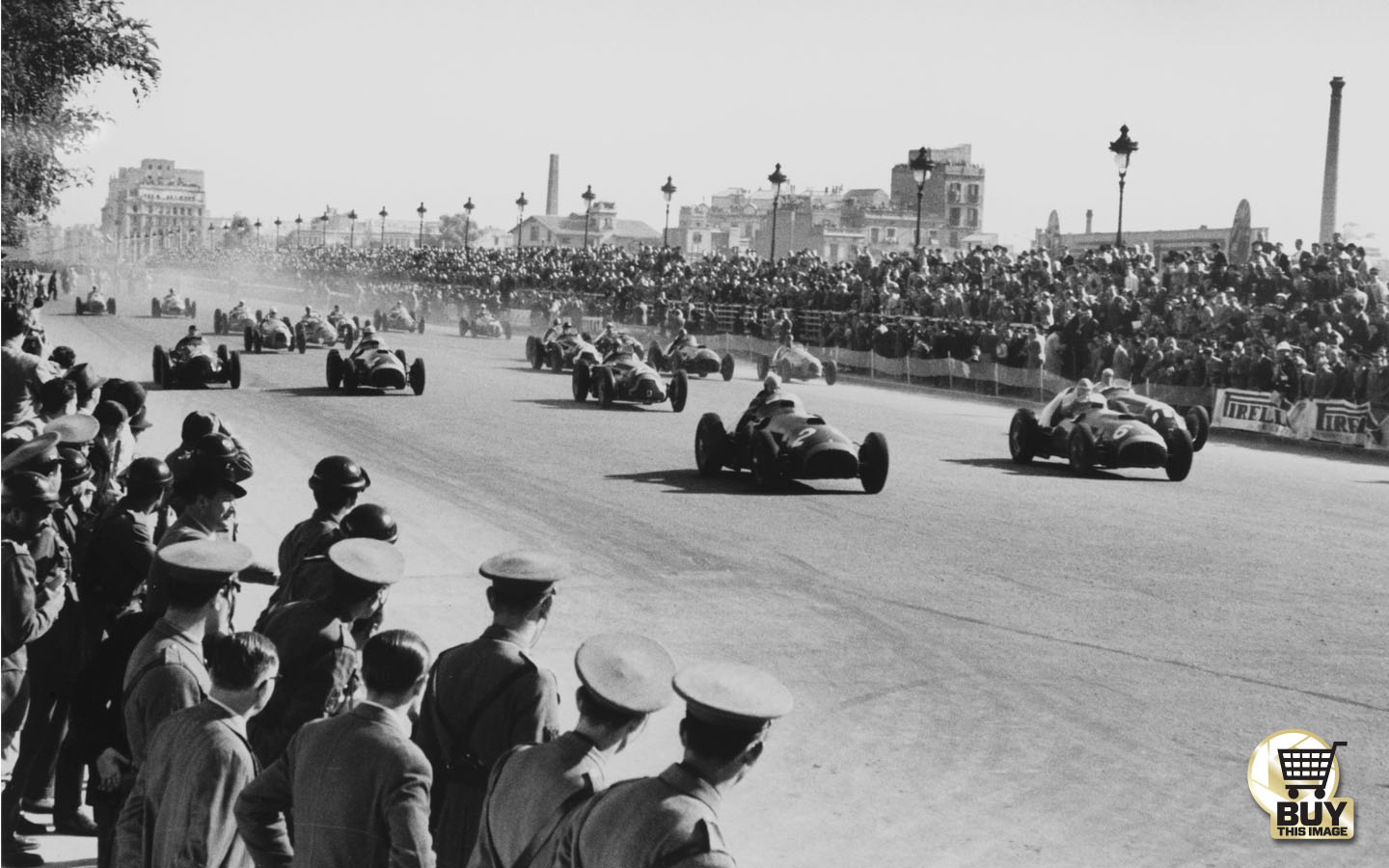 Despite squeezing more than 400bhp from its supercharged 1.5-litre straight-eight – the formerly lithe Alfetta now bloated and bulging with tanks to cope with a 1.5mpg thirst in its 159M form – Alfa Romeo was under the cosh in its battle with Ferrari, whose normally aspirated 4.5-litre V12 could match its pace on fewer fuel stops.

Title aspirant Alberto Ascari, winner of the previous two GPs in Germany and Italy, took the lead of the finale from pole and the chasing Fangio’s hopes were fading when he was struck by a rubber ‘bullet’. Ferrari had made an ill-advised switch to 16in rims and its smaller Pirellis were struggling to cope with the speed, weight and heat. Ascari was forced to pit before 10 laps and was a regular visitor thereafter.

Thus Fangio won the first of his five world titles – and Alfa Corse bowed out on a high. 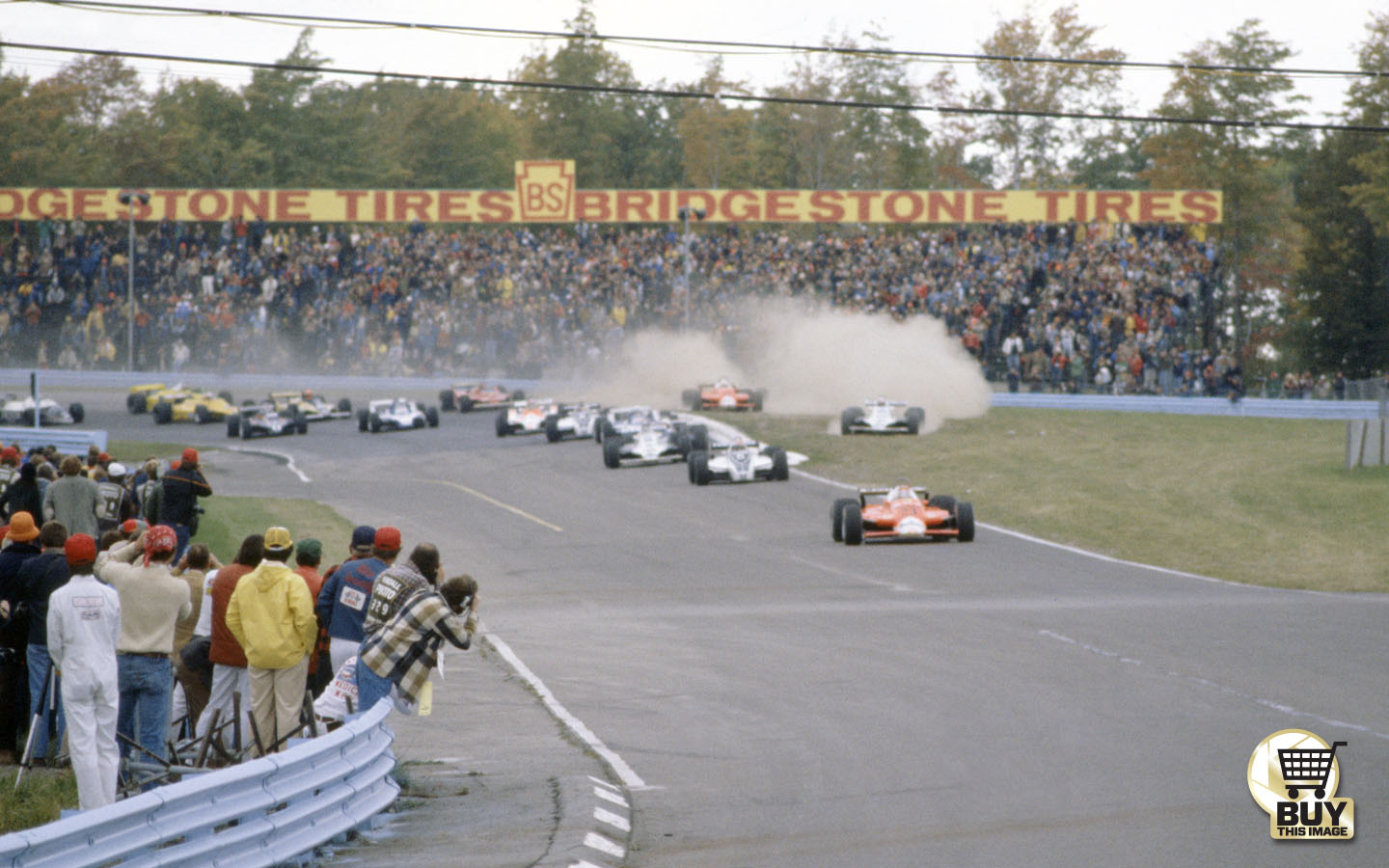 It was just like the old days. Those long ago days. Bruno Giacomelli, from Alfa’s first GP pole position (by eight-tenths) for 29 years, was loping along in the lead with 12sec – and 500rpm – in hand over the Williams of newly crowned world champion Alan Jones. The 1978 European F2 champion had stepped up to the plate after the death of team leader Patrick Depailler during testing at Hockenheim in August – but had been denied solid results by niggling problems and niggles with other drivers.

Reliability had been hard to come by since Alfa’s F1 return in 1979 – and another gremlin would rear its ugly head at Watkins Glen on 5 October. Just past half-distance an ignition coil burnt out and Giacomelli coasted to a bitter halt: “It had been too easy.” When the race was over a new unit was fitted and the 179’s V12 burst instantaneously into life.

They hadn’t all been his fault, but, boy, there had been a jolly lot. Yet now Andrea de ‘Crasheris’, just turned 24, was leading as though it were an everyday occurrence. His Gérard Ducarouge-designed Euroracing Alfa 183T, benefiting from new-type compressors in its V8’s turbos, had twice burst from the second row – the first start was aborted – to take the lead. And there it and he stayed, setting the race’s fastest lap – Alfa’s first for 32 years – in preparation for a pit stop.

Sadly, the latter was bungled – a rear wheel jammed – and the lead was lost to Renault’s Alain Prost. Such had been de Cesaris’ pace, however, he was still in second place when the engine failed six laps later.