Fernando Alonso has said that he is returning to Formula 1 in the hope that a level playing field will give him the chance to win a third world championship.

After two years away from the series, he told a press conference that he still loves racing, and would use his first year back in F1 to prepare for a title challenge the following season.

New regulations will be introduced in 2022 with the aim of increasing competition. Asked if he could win a third championship, Alonso said: “I would love to and my return is not to visit the restaurants of every city or to take some flights.”

He is currently promoting a new Amazon Prime documentary, Fernando, released tomorrow, which charts his life over the past year, in which he won at Le Mans, raced at Dakar and attempted the Indy 500.

“The two years I was outside of [F1] there were things I wanted to do more than driving an F1 car,” said Alonso.

“I did them; I have liberated by hidden desires and now it’s time to return. I love to [be behind the wheel of] a racing car every two weeks.”

Alonso left Formula 1 in 2018, after four years in McLarens that could not challenge for victory behind the all-conquering Mercedes.

But he frequently spoke of an interest in coming back for the series’ new era, which offers hope for a shake-up of the established order, and said that he first spoke to Renault in November 2019 “I think” about a 2021 comeback.

Coronavirus has delayed the introduction of the rules by a year until 2022, and Alonso says that this gives him a chance for a flying start with the team, which will be renamed Alpine.

“These two years without F1 I have checked my check list,” he said. F1 is still in a time there’s not great competition,” he said.

“So I thought this was a good time to do the things I wanted to do and then return now with the new regulations.

“They have been postponed to 2022 and I had a time when I didn’t know what to do – do I wait until 2022 or return next year and start with a warming up and working with the team? That’s what I went for.” 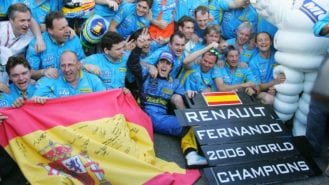 Earlier this week, Renault published footage of Alonso returning to the factory that built his 2005 and 2006 title-winning cars and having a seat fitting, in the hope of a test later this season.

He said that he would work with the team in the simulator and would likely attend two races this year. In the press conference Alonso said that the challenge was to get back into the F1 mindset.

“It’s quite unique; very demanding and you have to be a perfectionist like in no other category,” Alonso said.

“You have to talk to the engineers, I have my computer where I can listen to the team radio – I am very much involved in what is happening each weekend and that is helping me get up to speed.”

Up to speed for the double world champion means challenging at the front of the field. “You go for a specific purpose and try to win,” he said. Being fifth is better than sixth but it doesn’t change things that much. Either you win or you don’t.

“The goal is to try and win. We know in 2021 it will only be for Hamilton and Mercedes.

“So Renault-Alpine, Fernando, Ferrari, Carlos [Sainz], Red Bull, [Max] Verstappen, many people have high hopes. But in one and half years we will all be in the same situation to get on track and see if we can be up to the task.”

A second series of the documentary is already in production to cover Alonso’s return to F1.