Fernando Alonso defends his moves to Ferrari and McLaren-Honda 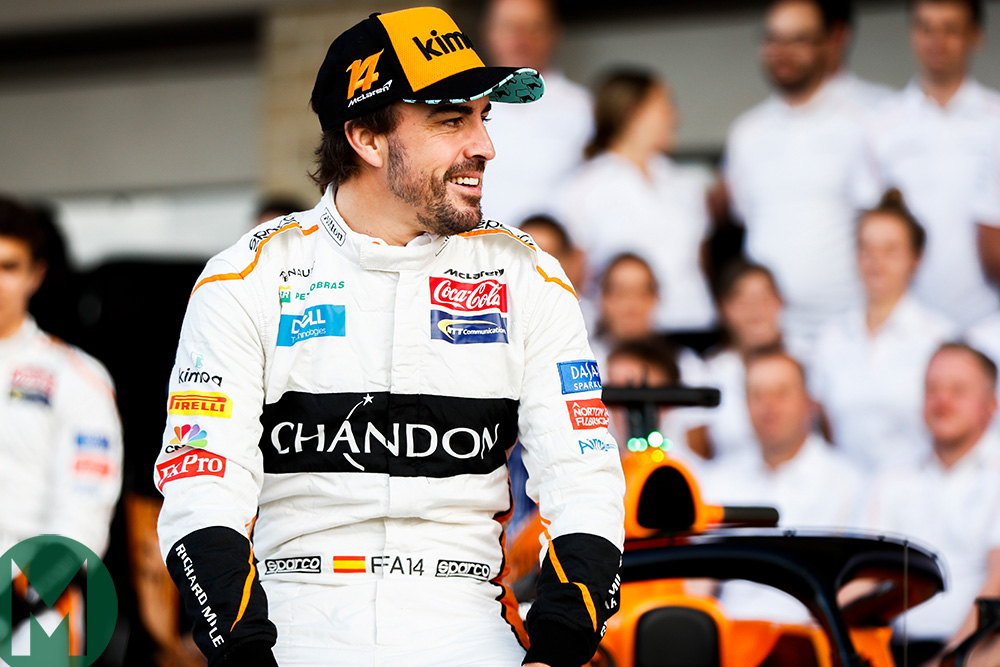 Two-time Formula 1 champion Fernando Alonso says that he has no regrets over his move to Ferrari at the end of 2009 and his subsequent jump to McLaren-Honda in 2015. The Spaniard also ruled out a return to F1 in 2021.

Alonso won his brace of F1 titles in 2005 and ‘06 with Renault but moved to an uncompetitive Ferrari squad in ‘09.

“Ferrari wasn’t competitive but I still had good fun — I was still fighting for a lot of championships until the last race,” he says. “Obviously if you know the results in advance you maybe do things differently.”

In 2015, when Honda returned to the sport, Alonso returned to McLaren and finished 17th in his first season with the struggling squad.

“And then in 2015 the McLaren-Honda combination was attractive and everyone was agreed here in the paddock it could be a success, so I joined that project with a lot of hopes and a lot of commitment and I think we didn’t succeed. But we’re still doing a decent job in recovering and never giving up.”

Does Alonso rue his decision to step away from Renault in the first place? Not at all.

“The rules change went in the wrong direction… In a way, it helped the less talented people.”

“From 2009 when I left Renault, Renault never won a championship from that moment so it’s not that Renault is dominating the sport.

“When I left Ferrari in 2014, they never won a championship from that moment so it’s not they are dominating the sport. Every step I did, I didn’t succeed but also the team I left didn’t succeed.

“I don’t understand the people that think I made the wrong choices constantly because with all of my last choices, [those teams are] still not winning.”

As for this year’s Ferrari, Alonso says that he campaigned in “much worse cars” during his time with the Scuderia.

“If I go back without the crystal ball, I would take the same decisions.”

When Alonso announced that he would leave F1 after the 2018 season, he hinted at a possible return to McLaren – depending on the team’s form.

“I know they will come back stronger and better in the future and it could be the right moment for me to be back in the series; that would make me really happy,” he said in August. But his tone has changed, especially considering F1’s impending rule changes.

“I think at that time, 2021, it will be a little bit too late. I don’t know for certain because it’s difficult to know how you will feel in two weeks’ time, so I don’t know in two years’ time, but to have the energy to start back up and to put full dedication and full commitment to something when you’re 39 or 40 years old… it’s going to be more difficult than now. I am not planning [to do] that.”

And he specifically blames F1’s direction for his lack of love for the motor sport, particularly in terms of tyre selection and the 2010 refuelling ban.

“The rules change went in the wrong direction because now the teams have very little room to play and to use creativity into strategies or anything like that,” he explains.

“They train a lot in the simulator, they arrive to the new circuits knowing exactly where the bumps are, where are the kerbs that you can take, where are the difficult spots and then into the race, normally there is only one optimum way to arrive at the end.

“It’s all about how to save the energy, the tyres, whatever the engineers tell you to do, you just follow that instruction.

“You have a little bit of room for instinct in different parts of the race but normally it’s less optimum if you try to do it yourself. I think when we didn’t have all that information it was more you and the car on a Sunday afternoon and I think it was more about driver input.”

Alonso will return to single-seaters in 2019 – at the Indianapolis 500 – while also competing for World Endurance Championship ‘superseason’ supremacy with Toyota.