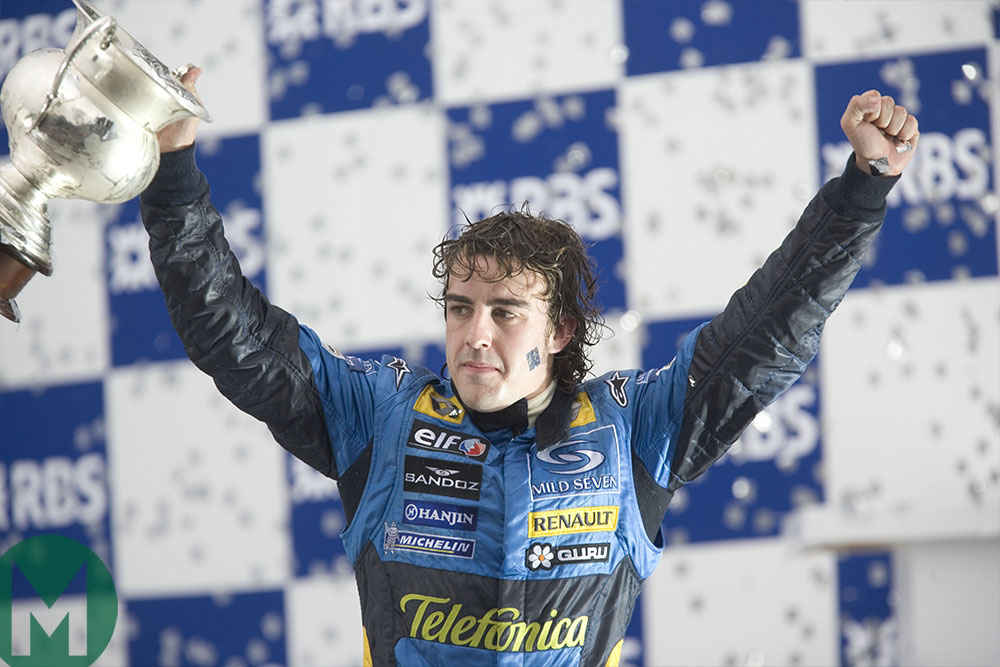 Fernando Alonso wins the Euro Open by Nissan with six race wins, eight podiums and six poles. In 2000, he competes as the youngest driver in the F3000 championship and he also steps into the Minardi M01 for an F1 test in December.

Alonso, 19, tests for Benetton to gain his superlicence and steps into the Minardi. He finishes the 2001 season without any points but impresses throughout, outqualifying team-mate Tarso Marques by 2.6sec in Australia and repeating the feat at the A1 Ring and Imola. In Germany, he manages to finish 10th on his birthday. Reports surface that Sauber is looking to replace the outgoing Kimi Räikkönen with the young Spaniard although Felipe Massa eventually takes the seat.

Flavio Briatore becomes team manager of Benetton, which is in the process of being taken over by Renault. Briatore wants to give Alonso a seat in place of Jenson Button, but the Briton retains his seat and Alonso tests the car that season instead. In 2003, Alonso replaces Button. He becomes the youngest polesitter, at the Malaysian GP, but crashes hard in the Brazil. Alonso, however, finishes second at his home race and manages to win the Hungarian Grand Prix, becoming the first Spaniard to do so and the youngest Grand Prix winner.

Ferrari’s Formula 1 dominance continues as Michael Schumacher wins 12 of the first 13 races with Rubens Barrichello his rear-gunner. Renault’s Jarno Trulli wins the Monaco GP but falls out of favour with Briatore. Although Alonso finished fourth in the standings, the youngster impresses again with four podiums and a pole, although he misses out in France to Schumacher.

Schumacher’s five-year reign shows signs of ending as Alonso picks up three consecutive wins, including one at San Marino with an underpowered Renault engine as he narrowly holds off a chasing Schumacher.

Räikkönen (McLaren) wins the next two races but Alonso bounces back at the European GP as Kimi crashes on the final lap. Team-mate Giancarlo Fisichella wins just one race and the Schumacher challenge fades, leaving Räikkönen as Alonso’s only contender. The Spaniard clinches it with third in Brazil, becoming the youngest drivers’ champion at the age of 24 years and 59 days. A bombshell drops as McLaren announces that it has signed Alonso for the 2007 season.

“Spain is not a country with an F1 culture, and we had to fight alone, every step of the way, to make this happen. A huge thank you to the team as well: they are the best in Formula 1, and we have done this together. It will say that I am world champion, but we are all champions, and they deserve this” – Alonso after the 2005 season finale 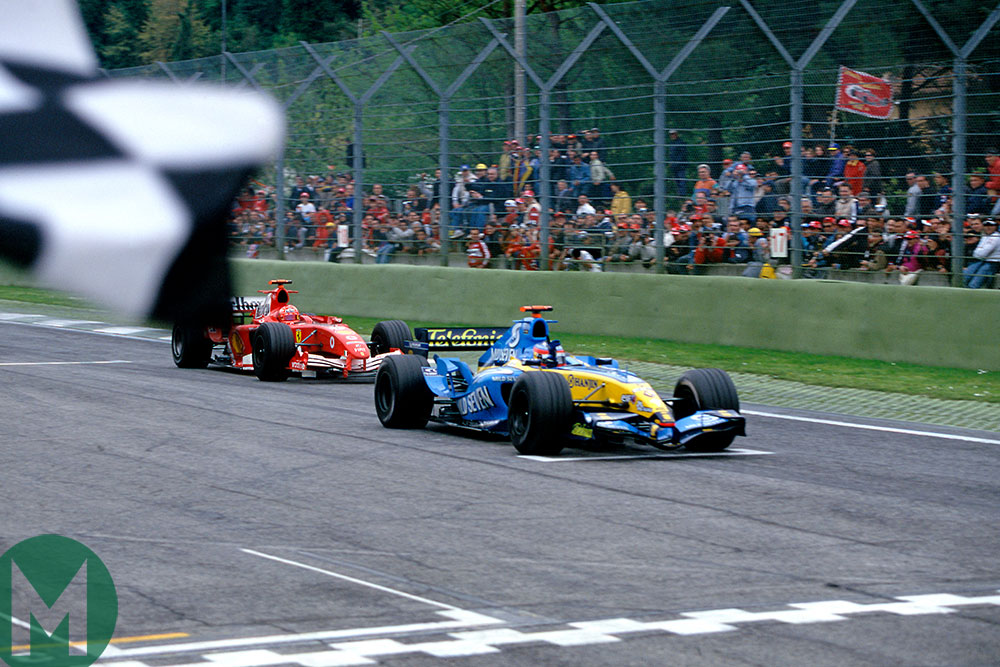 Schumacher is back, and F1 has new 2.4-litre V8 engines. Alonso and Renault are fast and consistent at the start of the season although the R26’s ‘mass damper’ is banned. The team still manages to give Alonso seven wins, including one at his home race. Schumacher takes seven victories as Ferrari hits back, but the 2004 champion courts controversy as he parks his Ferrari at Rascasse in a fruitless attempt to deny Alonso pole and a win in Monaco. Reliability issues cost Schumacher the title in the final race of the season, and Alonso manages to beat the seven-time champion to the drivers’ championship. Schumacher retires at the end of the season.

Alonso joins McLaren and partners with impressive rookie Lewis Hamilton, who takes a podium on his debut with a first lap overtake on Alonso, but the relationship quickly sours in a fractious campaign. In Monaco, Alonso secures a 1-2 for McLaren but the FIA investigates McLaren for using team orders as Hamilton is told to ease off on Alonso in the latter stages of the race.

“I tried to attack him and wanted to win if I could, but I have to accept that I am in my rookie season and he has number one on his car and I have number two. I am the second driver and so I must accept that and respect that for the team” – Hamilton after the 2007 Monaco GP

McLaren is cleared of wrongdoing and Hamilton takes the championship lead as Alonso flounders in Canada and finishes second to the Briton at Indianapolis. Italian authorities investigate a disgruntled Ferrari employee, Nigel Stepney, and it emerges that McLaren engineer Mike Coughlan has received Ferrari technical information from Ferrari. 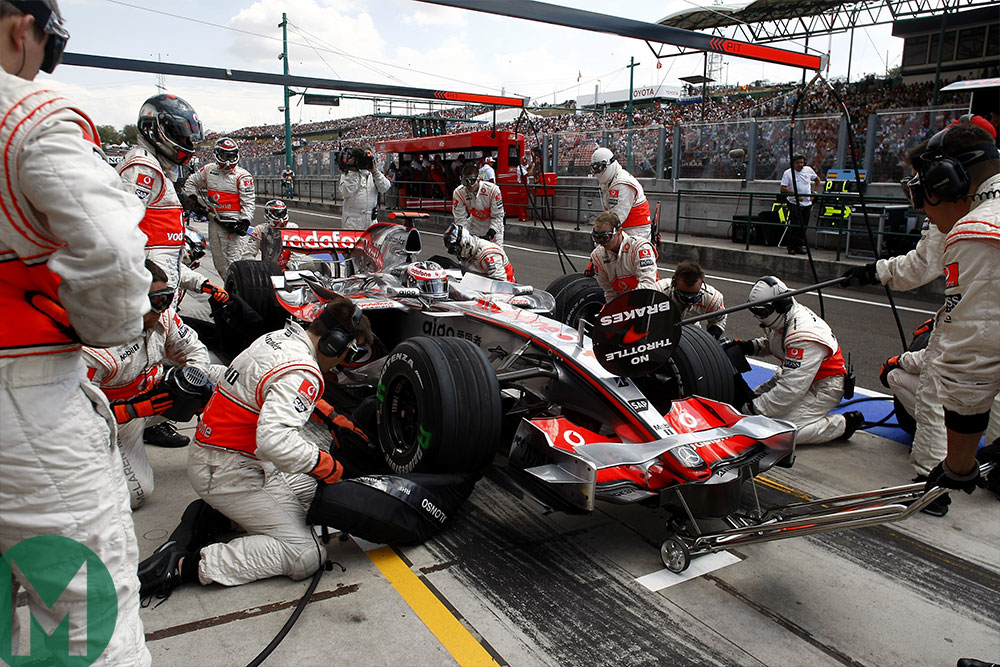 In Hungary, Alonso takes his rivalry with Hamilton to a new level. During qualifying, Alonso denies his team-mate the chance to set a final flying lap by occupying the pit box and senior McLaren management begin to lose patience with the Spaniard, who was demoted to sixth as a result. McLaren is told that it would be docked any constructors’ points from the race.

On the morning of the race, Alonso allegedly threatens Ron Dennis with the release of Dennis’ email exchanges with McLaren test driver Pedro de la Rosa and Mike Coughlan. Dennis informs Max Mosley of the exchange with Alonso.

Alonso wins at Monza and forwards email exchanges at the request of the FIA to the World Motor Sport Council for the following ‘spygate’ hearing, which Hamilton attends. McLaren is disqualifed from the constructors’ championship and is given a $100 million fine.

Hamilton is run wide by a victorious Alonso at the Belgian Grand Prix but the Briton bounces back at Fuji with a win. Hamilton grabs pole in China by 0.668sec over his team-mate, who vents his anger by kicking in a door after the session. The championship remains open, however, as Hamilton beaches his car on the entrance to the pits.

Räikkönen clinches the championship by a single point over both McLaren drivers as Hamilton finishes seventh, and Alonso third, in Brazil.

“Having fought what was both a close and thrilling battle all year, and then not to win it at the final hurdle is extremely disappointing” – Ron Dennis after the 2007 Brazilian GP

Alonso rejoins Renault after a single season and takes his first win of the season in Singapore after team-mate Nelson Piquet Jr crashes on lap 14 to bring out a safety car. It later emerges that Piquet was asked to deliberately crash by the team to help Alonso – absolved of any blame – gain the lead from 15th. Alonso ends the season with 13 points.

Renault’s middling performance unsettles Alonso, who manages to gain a podium in Singapore and secure a Ferrari contract for 2010. Alonso takes victory on his debut for Ferrari but Red Bull keeps Ferrari in the dust. Suspected team orders give Alonso victory in Germany and three wins in the next four races give Alonso an advantage going into the final race. Stuck behind Vitaly Petrov in Abu Dhabi, he misses out on the title to Vettel.

“It’s a shame to get to the end of the season and then lose the title at the final moment, but that’s racing, that is sport. Everything went wrong today, from the start itself to the strategy” – Alonso after the 2010 Abu Dhabi GP

The 2011 Ferrari challenger gives Alonso a win at Silverstone and Massa cannot match the Spaniard, but Red Bull’s period of dominance is just beginning. Alonso challenges for the title in 2012 but misses out as Jenson Button wins the final Brazilian Grand Prix, and Vettel wins the title with sixth in the finale. He begins strongly in 2013 but finishes a distant second in the championship.

“Losing out on third in the Drivers’ Championship is definitely not a big problem: first place is the only one that really counts…” – Alonso after the Abu Dhabi GP

The hybrid era dawns on F1 and Ferrari is winless, with Alonso sixth in the championship and his team-mate Räikkönen 12th.

The 33-year-old joins McLaren with two years left on his Ferrari contract, and Alonso reveals that he had begun to think about leaving Ferrari as early as 2013.

“It was a difficult decision to take, but a carefully considered one from start to finish. My love for Ferrari was a prime consideration” – Alonso on leaving Ferrari

He rejoins McLaren and would race alongside Jenson Button. But on the second day of preseason testing, Alonso crashes heavily and suffers concussion. McLaren starts the first race on the last row, while Ferrari takes a podium. He struggles that season and ends up 17th in the championship.

“It feels like GP2. Embarrassing. Very embarrassing” – Alonso during the 2015 Japanese GP

A crash in the 2016 Australian Grand Prix injures Alonso and he returns in China. McLaren-Honda has improved, but not enough to challenge for the title, and Alonso ends the season 10th. 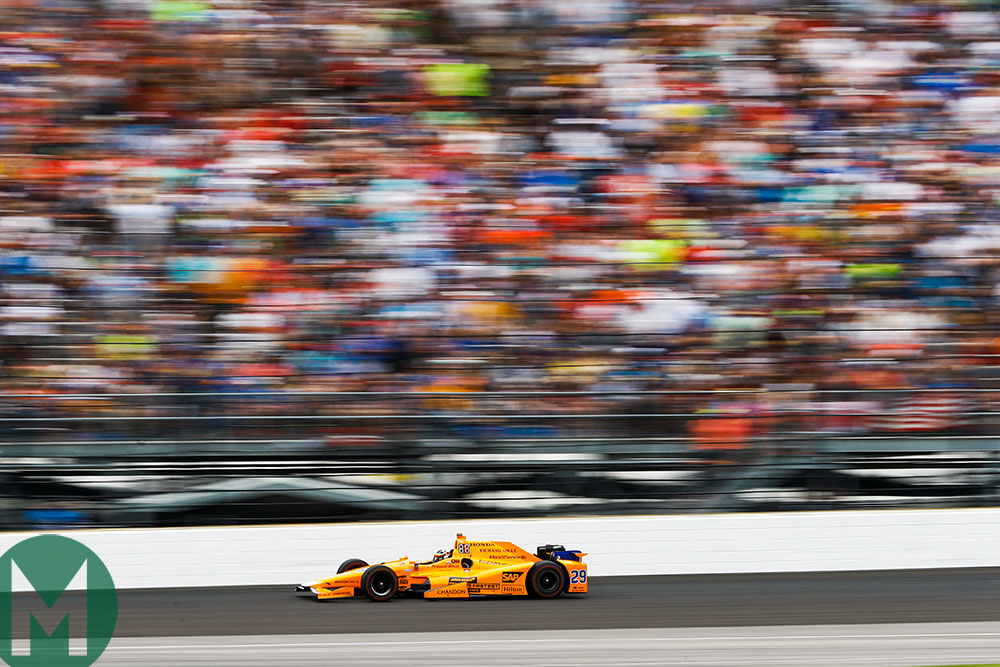 In April, Alonso announces that he will miss the Monaco Grand Prix to compete in the Indianapolis 500. A Honda engine failure retires Alonso from the race on lap 179 of 200 but he captivates crowds by leading 27 laps and creating headlines. He reaches Q3 in the Spanish GP and scores the fastest lap in Hungary, but McLaren’s Honda engine remains uncompetitive.

At the end of the season, McLaren announces a switch to Renault engines and a multi-year contract extension for 36-year-old Alonso. In October he also announces that he will race at the 24 Hours of Daytona; in November he participates in a World Endurance Championship rookie test for Toyota.

Alonso finishes the 24 Hours of Daytona in 38th place as the Ligier proves uncompetitive. In January, McLaren announces that Alonso would compete in the WEC ‘superseason’ for Toyota, and he takes victory on his WEC debut at Spa. Kazuki Nakajima takes the no8 Toyota to victory in the final stint of the 24 Hours of Le Mans, with Alonso and Sébastien Buemi his team-mates. In August, Alonso announces his decision to leave McLaren at the end of the season and move on from F1 after 17 years in the sport.

“I want to thank everyone at McLaren. My heart is with the team forever. I know they will come back stronger and better in the future and it could be the right moment for me to be back in the series; that would make me really happy” – Alonso on his decision to retire