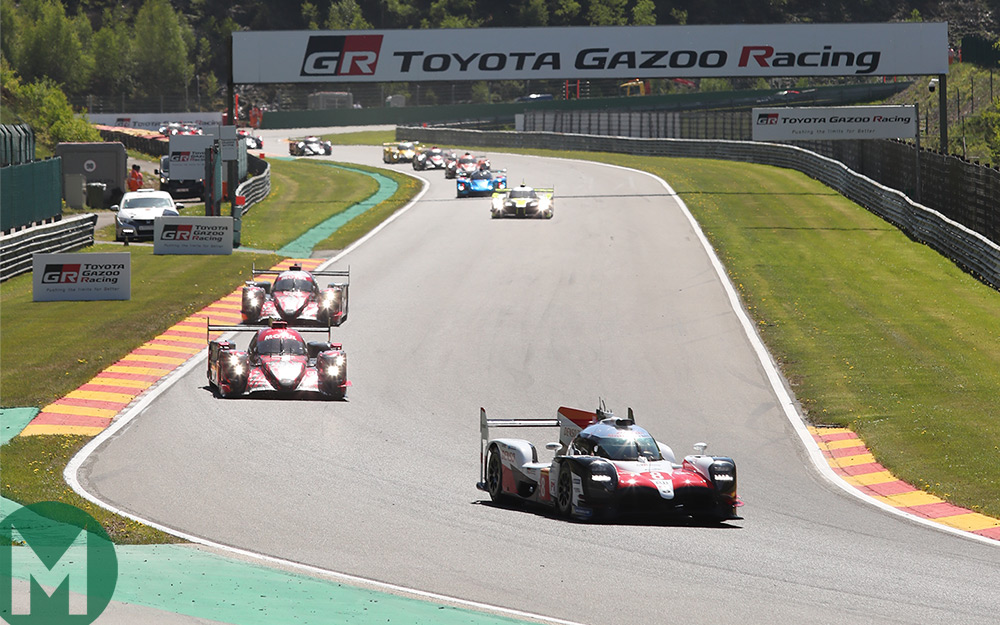 A late safety car, scrambled when the SMP Racing Dallara hit the tyre wall at the exit of Raidillon, created a tense final hour in what was set to be a dominant win for the no7.

Conway closed and closed into the final 40 minutes but darted into the pits from under Alonso’s tail for a final splash of fuel. Alonso in the no8 car followed a lap later but his stop was 10 seconds quicker. The gap disappeared within two laps, only for Conway to drop back by three seconds at the flag under team orders.

“We froze the positions after the final pitstop,” confirmed Buemi. “That was always the plan. The idea was to get them on the no7 on the lead lap because we didn’t know the situation with Rebellion.”

The no7 had to overturn a one-lap deficit and pitlane start to be in contention, having lost pole for a fuel flow limit meter violation in qualifying.

The Toyotas had the measure of the privateers throughout the six hours, with the no7 never headed and the no8 comfortably able to pick its way through the field.

Though Buemi insists the race wasn’t as easy as it appeared, and he believes Rebellion could be closer at Le Mans. “I think they could be faster than us, it’s complicated but they were only one second slower here and the way the electric energy works on the shorter circuit, they could be.”

“The gap should have been one lap,” added Jani. “We lost time with the safety cars and the electrical problems that all added up to the extra lap.”

Rebellion Racing’s Lotterer had put up a brief early fight on the opening lap, but Buemi quickly shook off the former Audi and Porsche racer and broke clear. But an early safety car for Mike Wainwright in the Gulf Racing Porsche nosing the barrier in avoidance of clashing Ferraris at Les Combes scratched Buemi’s lead.

On the restart Buemi was able to cleanly break away and create himself breathing space, soon disappearing down the road towards victory. The only scare came around the midway point, when Kazuki Nakajima replaced Alonso but was forced to return to the pit to properly fit his seatbelt and then spun at La Source.

While Nakajima was dealing with his dramas, Kamui Kobayashi in the sister car passed both Rebellions in quick succession as the race headed into the second half, and although the Rebellion briefly tried to fight back, it was a clean charge to second place.

Alonso had earlier proved himself adept at dealing with traffic when he took to the grass to clear a battling group of GT cars on the Kemmel Straight, having taken over the car during a long safety car period.

The cause was a scary crash for GTE polesitter Harry Tincknell in the Ford GT, similar to Pietro Fittipaldi’s in qualifying that had required surgery for two broken legs overnight. Tincknell was able to walk away unaided from his, the impact reportedly 29G, and later given the all-clear from the medical centre. An unknown front-left issue is believed to have been the cause.

Further back in LMP1, the ByKolles, starting and finishing fifth, simply couldn’t live with the early pace of the leaders and dropped back, soon being caught and passed by the SMP Racing Dallara of Stéphane Sarrazin that had started at the foot of the field after stopping early in qualifying without setting a combined time. Vitaly Petrov in the sister SMP car was an early pit caller with a puncture and fell well back out of contention in sixth.

G-Drive Racing dominated LMP2, once the Jumbo-entered P2 had encountered gearbox issues. Giedo van der Garde started superbly to lead from seventh in the Dutch car and build a gap until the problems struck. Jackie Chan Racing’s Ho-Pin Tung, Gabriel Aubry and Stéphane Richelmi took second ahead of the Signatech Alpine of the impressive Andre Negrao and co-drivers Nico Lapierre and Pierre Thiriet.

The late safety car produced a spectacular finish in GTE-Pro, as Ford’s Olivier Pla completed a stunning move on Porsche’s Richard Lietz through Eau Rouge and Raidillon. The Porsche fell back to fourth, losing out on a podium courtesy of a strong move by Davide Rigon of Ferrari at the Bus Stop late on, with Michael Christensen up in second.

GTE-Pro was always the domain of Porsche and Ford, as the top four were tightly packed until Tincknell’s dramatic crash. The Ferraris, Aston Martins and BMW spent much of the race out of contention, further fuelling a growing Balance of Performance dispute. The new M8 and Vantage’s fastest laps fell short of those set by both the Am class Aston Martins and the Dempsey-Proton Porsche of Matteo Cairoli, adding weight to the case against the current BoP settings.

In Am, a late Aston Martin duel was won by Pedro Lamy, rebuffing a number of Euan Hankey’s attempts.