Yas Marina Circuit, host of the Abu Dhabi Grand Prix, has virtues. But, in its decade on the Formula 1 itinerary, racing has rarely been among them.

It therefore is dolefully appropriate that the venue’s most notable moment in that time has owed precisely to overtaking barely being on the agenda.

As, for Fernando Alonso and Ferrari, Abu Dhabi lived up to its reputation quintessentially at the worst moment. In the 2010 world championship showdown.

This finale was remarkable even before a wheel turned. Four drivers remained in championship contention – an unmatched record (unless one does creative accounting with 1982).

Alonso – seeking his third world championship – instead had apparently as his main threat Vettel’s Red Bull team-mate Mark Webber, who like Vettel was after his first crown. 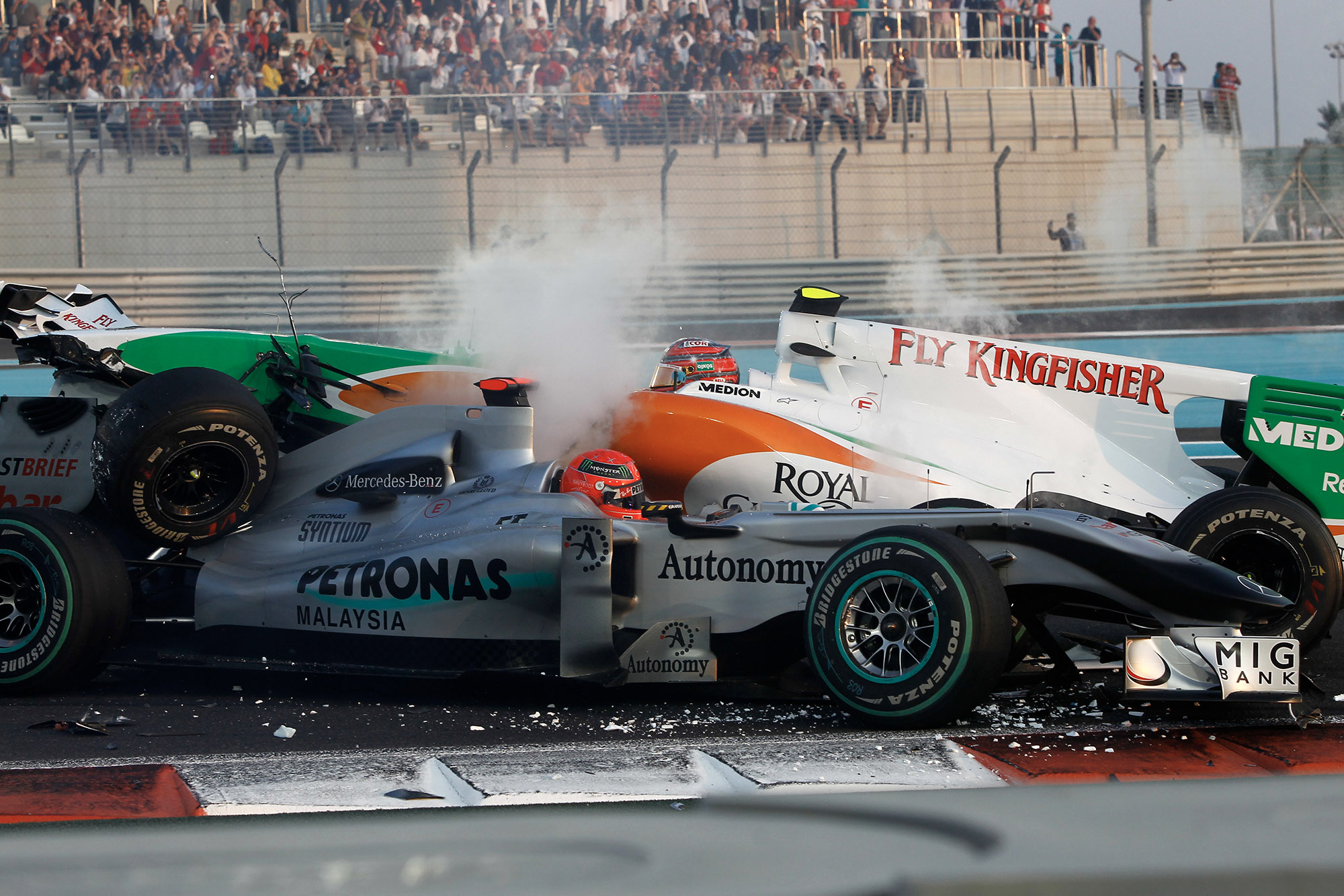 Schumacher is hit by Luizzi, bringing out the safety car and changing the course of the championship Photo: Motorsport Images

Brazil’s race a week earlier finished Vettel-Webber-Alonso, and plenty criticised Red Bull for not swapping its drivers to help Webber. It meant if Webber won in Abu Dhabi Alonso needed second to be champion. If Webber didn’t win, fourth was enough.

But as it transpired, Red Bull not doing a Brazil swap formed the basis of its unlikely title smash and grab.

In qualifying things got even better for Alonso. He qualified third with Webber fifth. Jenson Button’s McLaren got ahead of Alonso at the start, but the Ferrari still was in place for the title.

Yet Alonso’s day began to unravel midway around lap one. The Mercedes pair Nico Rosberg and Michael Schumacher had faint contact; Schumacher spun in front of the pack and was hit – mounted indeed – by Vitantonio Liuzzi’s Force India.

The safety car was deployed and a number of cars took the opportunity to dump their supersoft Bridgestones – expected to only last around 15 laps – so they could run the rest of the way on mediums. Among them, significantly, were Rosberg and Vitaly Petrov’s Renault.

After green flag racing resumed Webber soon struggled with wilting rear tyres, him brushing a wall then, on lap 11, pitting. On his new rubber, once Jaime Alguersuari’s sister Toro Rosso moved aside, he started to post fast sector times. This left Ferrari with a conundrum, particularly with the supersofts thought to be on their last legs. 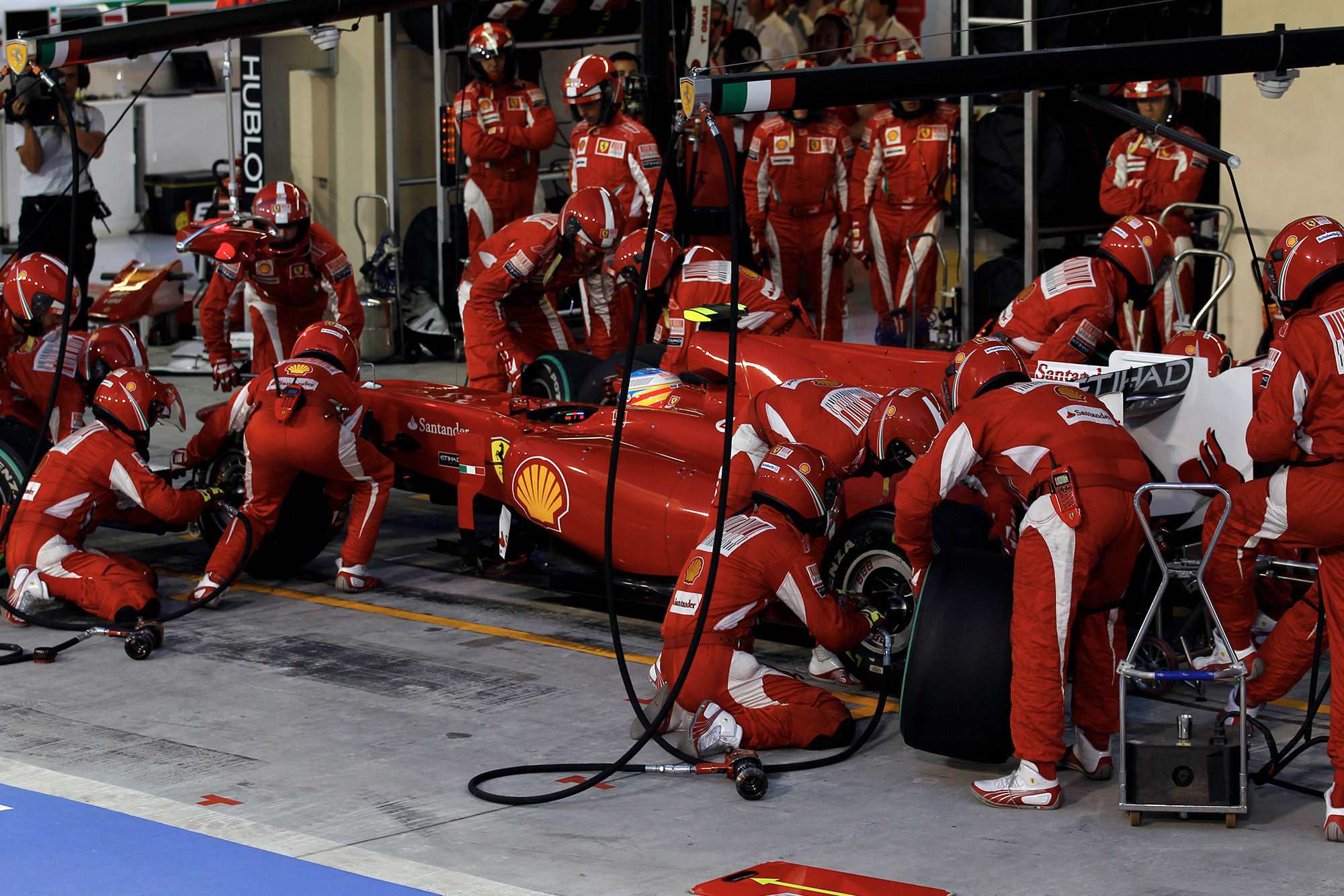 Alonso did re-emerge in front of Webber, but that was the move’s only plus. As he was behind Rosberg and, more immediately, Petrov. Neither was due to pit again.

“We have seen since Job was a lad, the aerodynamics of contemporary F1 cars militate against overtaking,” noted Nigel Roebuck in his Motor Sport report, “and a track like Abu Dhabi compounds the problem.”

Quite. After the first four laps of green flag racing there were only three overtakes anywhere that day, one of which was Alguersuari’s ‘cede’. There’d also only been four passes in the 2009 race. Adding to Alonso’s mire, Petrov’s Renault ahead had prodigious straightline speed, plus DRS and gumball Pirellis were still a race away from existence.

“Not for a second did Fernando relax the pressure on Vitaly,” Roebuck continued, “but the gap between them – always less than half a second – stubbornly remained. 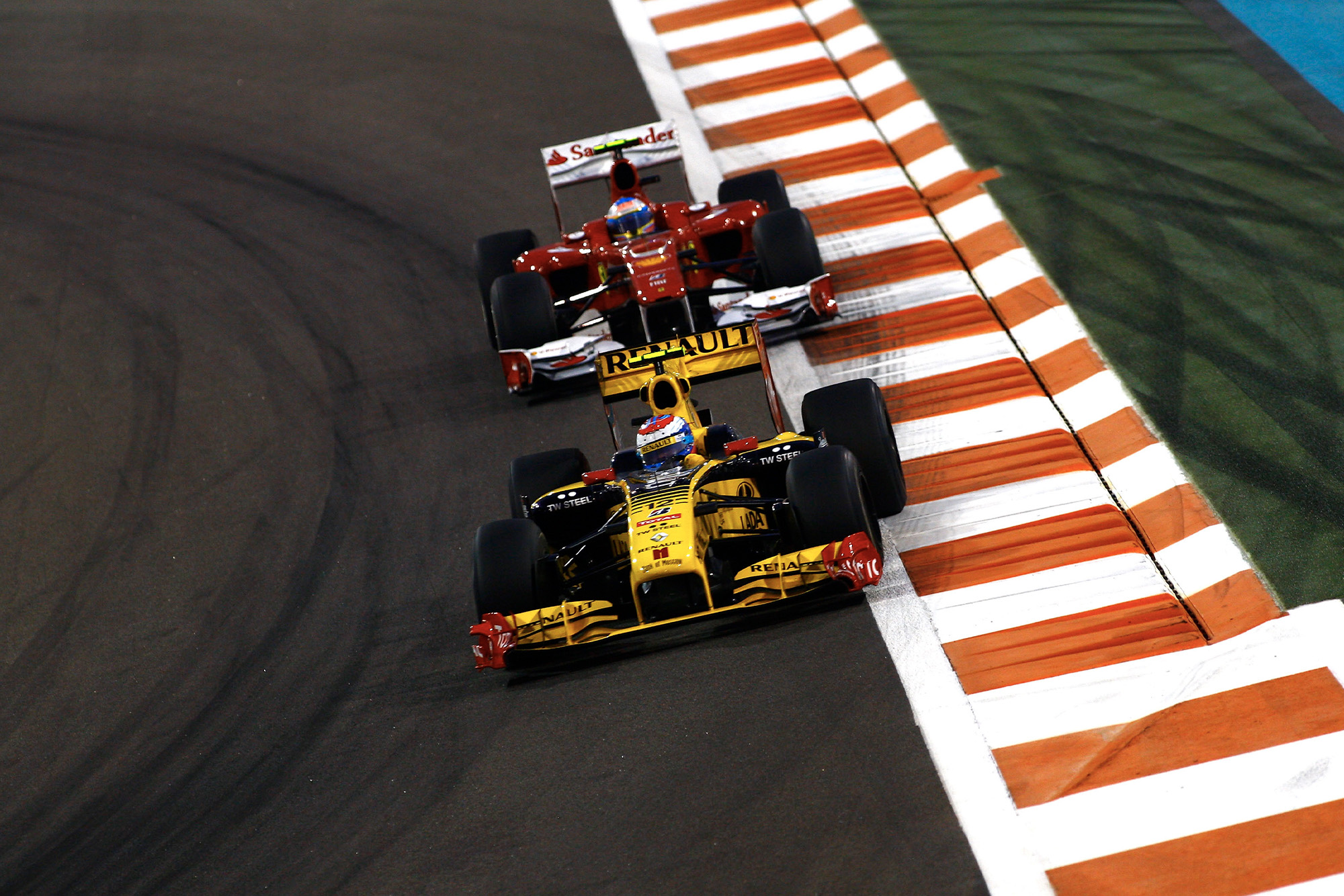 The Ferrari remained behind Petrov to the flag – a 40 lap stint Photo: Motorsport Images

“By the time the chequered flag came down, Fernando had been behind the Renault for no fewer than 40 laps.”

Twisting the knife for Alonso and Ferrari, the supersofts in fact lasted much longer than anticipated. The general pace drop just before their stop was a brief ‘graining phase’. Button took his set well beyond half distance.

And while all this was going on, Vettel led from pole and would take the title with a win that rarely looked in doubt.

Hamilton chased him, but after his stop dropped behind Robert Kubica in the other Renault. It left him with exactly the same problem as Alonso. Vettel, underlining that things were going his way, emerged from his halt just clear of traffic.

Hamilton stayed behind Kubica for the next 22 laps, only relieved when the Renault made its mandatory stop with 10 laps left. The remote threat to Vettel was long snuffed out. 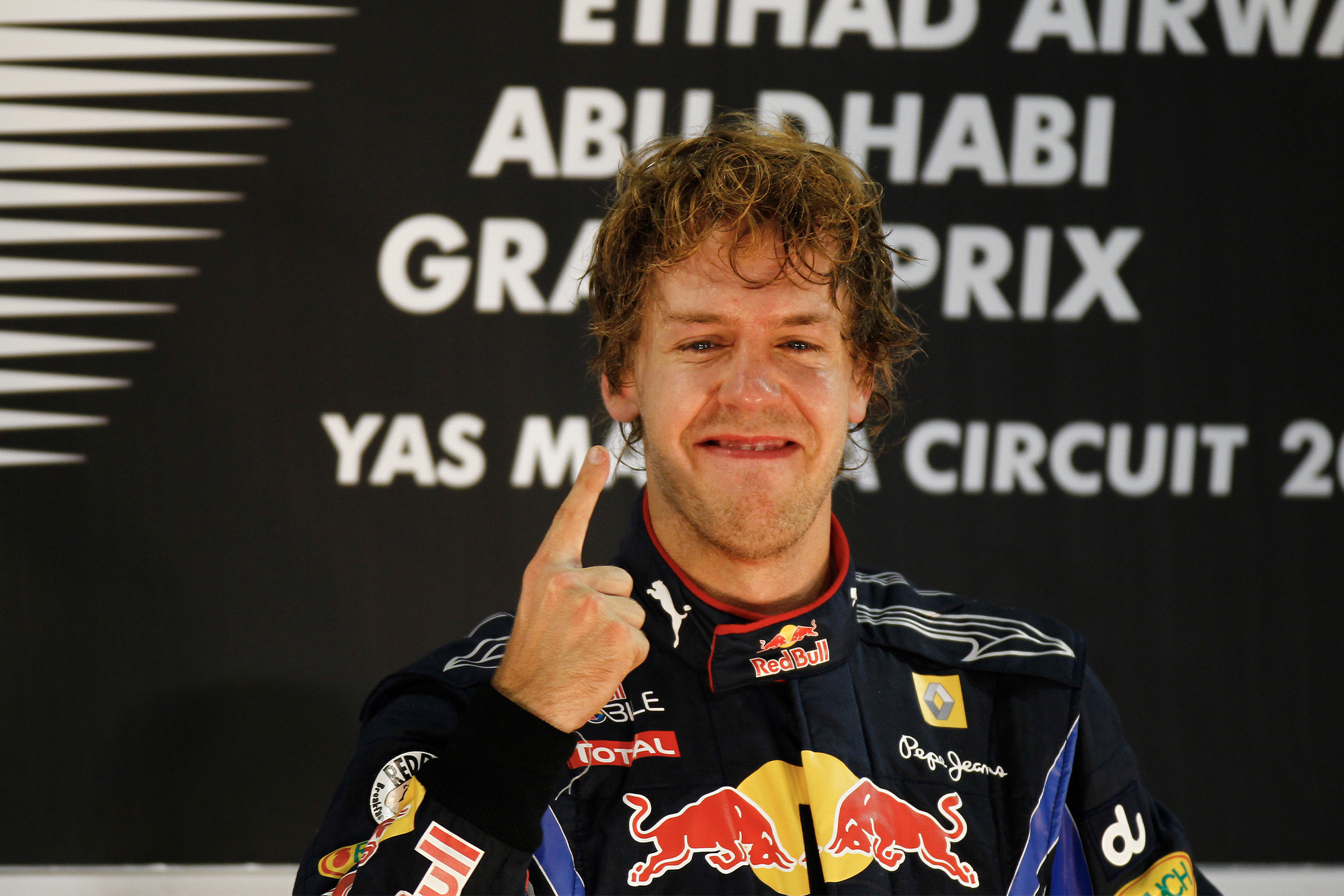 The first of four-straight titles for Vettel Photo: Motorsport Images

And for Alonso’s final insult, such was his time lost behind Petrov, Kubica emerged from his stop ahead of him too. He could only finish seventh with Webber behind.

Vettel won and became F1’s youngest champion, and a worthy one. He had lost points with errors that year (then again so had the other title protagonists), but also lost plenty to unreliability.

With perfect timing this was the first time he’d ever led the F1 championship, and he made good on it by winning the next three titles too.

In Abu Dhabi’s here and now though attention quickly focused on Ferrari’s strategic gaffe. The call to pit, as intimated, had rationale. But still even at the time, as Arron described it, Alonso’s stop took place “to general incredulity along the pitwall”.

That it meant passing two cars on track should have scratched the idea. Plus Ferrari should have realised Webber would hit the same problem that Alonso did.

Another charge was that Ferrari focused on Webber, rather than Vettel who had become the more immediate threat. “They were aiming at two tongs,” Webber noted, “but had only one hammer…”

And the bad call had a lengthy reverberation. Neither driver nor team has won another F1 championship.