Fernando Alonso’s third place at Qatar – his first podium in seven years – was well merited, a brilliant drive based on an over-achieving qualifying lap, an aggressive start where he set up Pierre Gasly perfectly then executed an around-the-outside move through Turn 2 which required raw car control to pull off, flat out off the line on the dust, and then running at a pace that the likes of McLaren and Ferrari found impossible to match whilst keeping the tyres in shape. He’s been super-fast through the second half of the season and in events where it’s been possible to make a fair comparison he’s been quicker than his very quick 25 year-old team mate Esteban Ocon 10-5. It’s the sort of performance that would have him winning races if in a top car and which the cynics said pre-season could never be reached by a 40-year-old. But those who understand his level knew was almost inevitable.

After two years away it took him a few races to find the groove of his great years, but he’s smack bang in it again now. Alpine consultant Alain Prost said of him in Qatar, “For me he is the best driver in the field. The overview of the race he has is unbelievable, as is his feel for the tyres, the statements he makes about the car and how he feeds the engineers.” 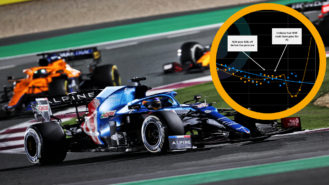 How Alonso and Alpine blew AlphaTauri away in Qatar

Fernando Alonso put in a brilliant performance in Qatar to take a surprise podium. We delve into how the Spaniard coaxed his car to third

Doubts expressed about his prospects coming in weren’t just about whether he’d still be fast, but how he might destabilise the team if it was not at the front, which it has not been. It’s been no more than a solid midfield operation this year, the Alpine quick only on certain types of corners and overall lacking the pace of McLaren, Ferrari and AlphaTauri. That’s hard-wired into the car, yet Alonso continues to be a productive presence and it seems he was aware this was something he had to work on, if Prost’s comments are any guide. “Fernando has always told me that he has become a different person, and I have to say that he was right. He is totally at the service of the team, and that is very good for the team.”

Even Ocon’s victory in Hungary – a possibility created by Mercedes’ strategic blunder of starting Lewis Hamilton alone on the grid and falling to the back when he pitted next lap and Valtteri Bottas taking all the other fast cars out – owed much to Alonso as he brilliantly held off Hamilton for 11 laps, delaying his progress through the field long enough to keep him from arriving on Ocon’s tail before the end. In that 11-lap dice with the Mercedes, Alonso’s incredible racecraft and judgement were on full display, often on the limit of what is permitted but never beyond it, and it’s a heady prospect imagining that such a dice could one day yet still play out at the front as a fight for victory.

“The way he always knows where to be to thwart you, is better than anyone I have ever seen”

The difference between Ocon and Alonso on that day was only where the Bottas-induced first corner chaos had parted in front of them, allowing Ocon to vault up to the front from midfield, but requiring Alonso to run to the outside to avoid the carnage. Alonso surely inside would have been wishing it could have been him to have taken this rare opportunity for victory, but even so seemed genuinely thrilled at the part he’d been able to play in securing it for the team. When the positions were reversed in Qatar, with Alonso running third but the faster Red Bull of Sergio Perez coming through the field and catching Ocon, Alonso understood the situation and relayed to the team that Ocon should ‘fight like a lion’ to keep the Red Bull behind. The DRS was more effective in Qatar than in Hungary so it wasn’t possible for Ocon to delay the chaser for more than a lap or two, but it inevitably one wonders if Alonso could somehow have found a way in the same situation. 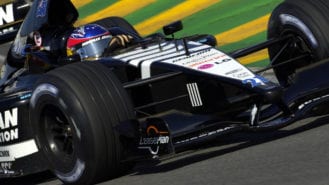 “The way he can place his car, how he can always know where to be to thwart you, is better than anyone I have ever seen,” says Mark Webber.

All those qualities of greatness are still there at 40 years old which, together with the performance of 36 year old Lewis Hamilton this season, suggests yet again it’s perfectly feasible for drivers to be competitive for way longer than is generally perceived. What brings careers to a close is the loss of the intense motivation and focus necessary, the inner willingness to go wheel-to-wheel at dangerous speeds with the ambitious, thrusting younger guy. Accepting racing on those terms. There are far too many case studies of great, fully competitive, performances at the highest level from drivers in their 40s for the common perception that drivers peak somewhere late 20s/early 30s to be true.

As such, calls for older drivers to move aside ‘to make way’ for young talent are misplaced. The young talent needs to be good enough to do it on merit, not by right.