On the flip side, Formula 1 will this weekend again attempt to woo, if that’s what it’s attempting to do – which I have long since begun to doubt – the racing public Stateside. Ever since it deserted Watkins Glen, its spiritual East Coast home, America’s GP(s) has/have been shunted unceremoniously from Vegas car park to Detroit down ramp, from Dallas fairground to Phoenix plaza. Even Indianapolis, the world’s most famous motor racing venue, didn’t suit its ‘purpose’: cavernous grandstands swallowed crowds that would have thronged other circuits; and F1 spat in its eye when, first, Michelin and then the FIA lost their grip in 2005 and Michael Schumacher scored the most hollow of his 91 victories. 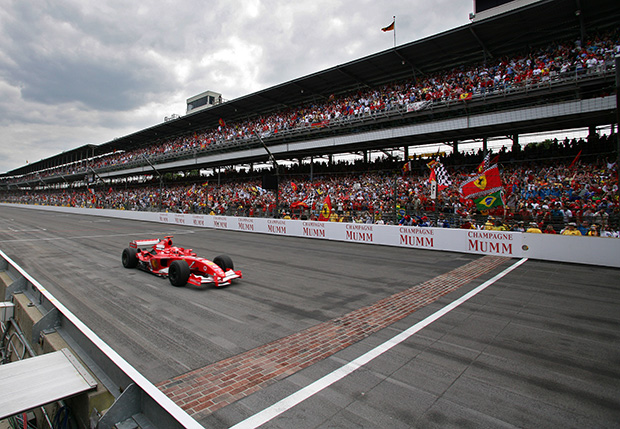 A computer sim of Austin, Texas’s new Circuit of the Americas reveals an interesting, varied and technical lap with, thank goodness, elevation change – but it undoubtedly faces an uphill battle if it is to stem the slide. For the days of inveterate Pond-skippers Dan Gurney and Mario Andretti are an increasingly distant memory, the chances of again discovering and encouraging and supporting their like an increasingly distant hope. Let’s face it, American drivers have struggled to win the Indy 500 – just four have done so since the 1996 creation of the supposedly protectionist Indy Racing League – never mind a Grand Prix. The brand that is NASCAR hoovers up the vast majority of the talent.

But where and when did it all go wrong?

Milwaukee – 100 years ago last month. The Butterfly Effect of one man’s death.

Back then America was at the hub of GP racing and possessed road racing’s brightest star: David Loney Bruce-Brown, a New York brownstone townhouse/Long Island clapboard retreat socialite. Handsome and charming – though he could be crude – he was a scion of a marriage that united three family fortunes, the odd number stemming from his father’s late first wife.

Dave was related to the Roosevelts. Dave had been groomed for Yale. Dave had another idea: to apply his wealth, connections, need for speed and linebacker’s physique, balance and commitment to motor racing. 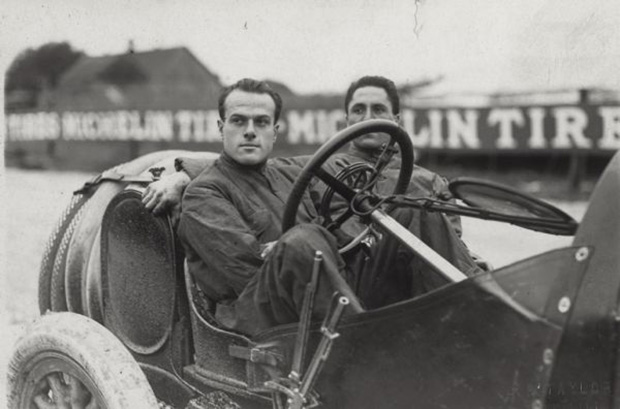 Bruce-Brown came first to prominence in 1908 when he drove a Fiat ‘Cyclone’ at Daytona Beach and broke Willie Vanderbilt’s amateur world mile record. He was just 18, though he said he was 20.

Throughout 1909, he competed with a year-old GP Benz, a big step up in performance that he took in his stride.

It was European motor racing that stumbled. Mercedes and Benz — they wouldn’t merge until 1926 — had humiliated their hosts with a 1-2-3-5 finish in the 1908 French GP at Dieppe. Content to milk this glory, Mercedes had no qualms about the resultant, piqued French moratorium: GP racing was put on hold in Europe.

Triple A, founded in Chicago in 1902, was the industry’s representative. For it, racing was a means to an end, a promotional tool. Its big race, the Vanderbilt Cup, inaugurated in 1904, had morphed into a stock-chassis affair designed to assist hometown marques.

Older by three years and blue-blooded rather than blue-collar, the ACA was higher falutin’: racing was a means in itself, a chance to reach across the ocean, to improve the breed. Its big race, the American Grand Prize, inaugurated in 1908, was run to freer, faster European regulations. 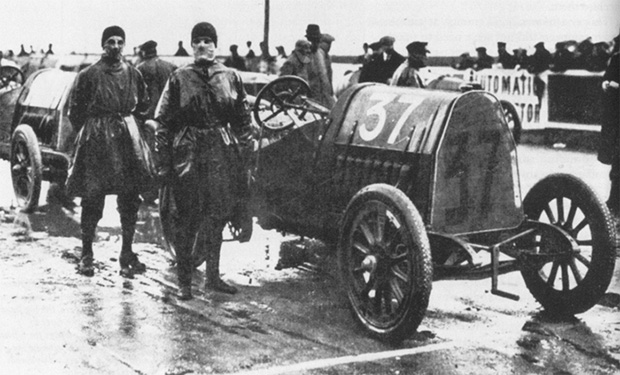 Bruce-Brown won the latter in 1910, at Savannah, Georgia. Despite his inexperience and the presence of Europe’s finest, including Fiat’s Felice Nazzaro, he set the fastest time in practice aboard his monstrous 15.1-litre works Benz and then stuck rigidly to a preset average in this 415-miler. His rivals ran amok, wrecking cars, engines, brakes and tyres while the impassive newcomer won by 1.42 seconds. The shocked crowd stood silent at the finish until Bruce-Brown’s fractious mother, resplendent in white — hat, coat, skirt, gloves — fluttered from the grandstand to embrace her grimy, Redfordesque boy.

Bruce-Brown won again in 1911, this time at the wheel of a 14-litre Fiat. His was another display of strength and speed, finesse and accuracy.

By the time of the 1912 race, held in Milwaukee in October, he had finished third in the inaugural Indy 500 and wowed Europe at the revived French GP.

His perpendicular Fiat, with its wooden wheels and detachable rims, was a dinosaur compared to the new-era, twin-cam 7.6-litre Peugeots, sat rakishly low on their centre-lock wire wheels, yet he led the latter’s Georges Boillot, the local hero, by two minutes after the first (10-lap) day in Dieppe. He would have been further ahead had he not had to juggle fuel churns while his rival wielded a pressurised hose. (Women spectators swooned at the muscular American’s gymnastic pit stops.)

He was still in front three laps into day two when a cracked pipe required him to refuel away from the pits, causing his disqualification. 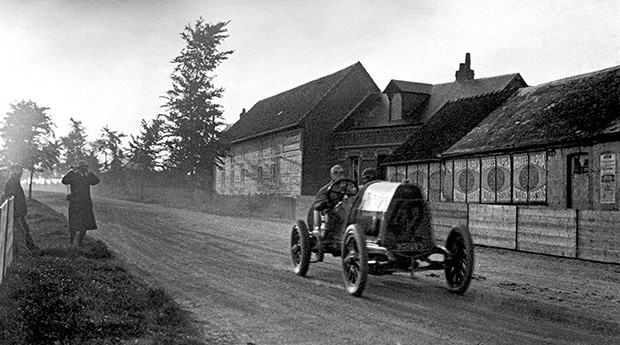 At Milwaukee, having already set the fastest practice lap, Bruce-Brown pleaded with starter Fred Wagner for more track time to perfect his gearing. Wagner pointed to the Fiat’s worn tyres, and apparently Bruce-Brown promised to go easy. But with team-mate ‘Terrible Teddy’ Tetzlaff in his sights, he suffered a rear puncture at 90mph. The big car rolled, crushing its occupants, and came to rest in a ditch near a cemetery. For the first time in his career Bruce-Brown had driven like the headstrong youngster he was.

The racer who could have bestrode the Atlantic throughout the 1920s and ’30s – he was only two years older than Tazio Nuvolari – was gone. Triple A won its ‘war’ and held American motor sport in its grip until 1955. By which time this self-contained superpower had become peripheral to GP racing.

It still is – now that Firestone and Goodyear are long gone – and looks likely always to be.