In the autumn of 1969 Chris Amon went to say his goodbyes to Enzo Ferrari, and it was an occasion savoured by neither man. After three years of unreliability and down-on-power V12s, Amon had concluded that, to compete with the likes of Stewart and Rindt, he had to have a Cosworth, and thus for 1970 he agreed terms with the fledgling March team, run by Max Mosley and Robin Herd. 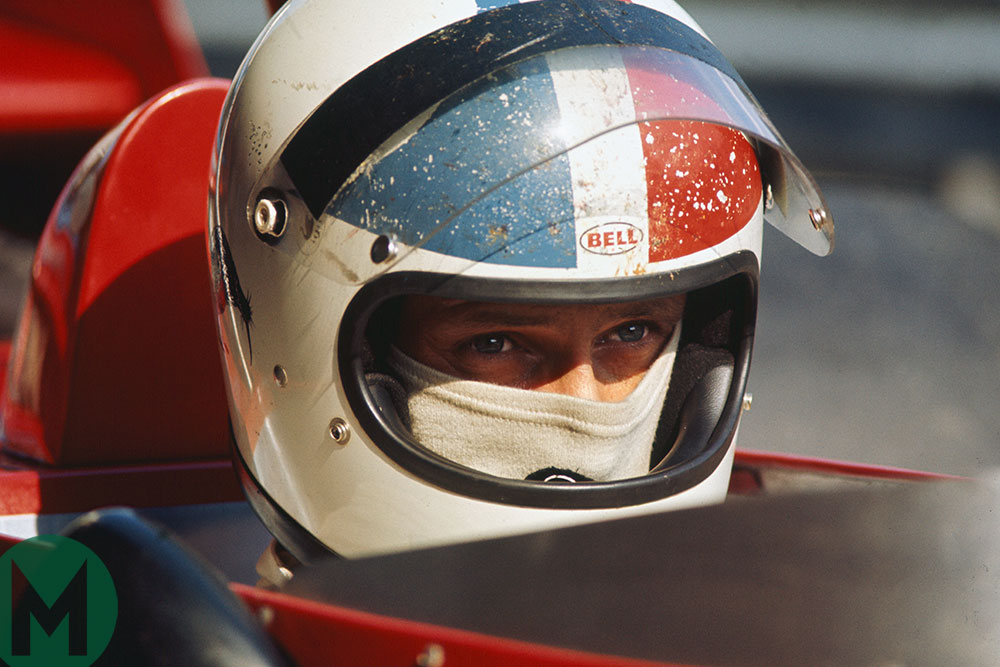 For all his frustrations, it gave Amon no pleasure to leave Ferrari, and the Old Man did all he could to persuade him to stay, assuring him that, for one thing, with Fiat about to become financially involved with the team, Ferrari would at last have a competitive budget. That might also have had an impact on Christopher’s salary: in 1969, competing in F1, world championship sports car racing, Can-Am and the Tasman Series, he had been paid $25,000. Assuredly no-one did it for the money in those days.

There was also the matter of the new flat-12 engine, which Ferrari was convinced would be able to compete with the DFV brigade, and more, but although Chris had tested the new 312B, and appreciated the potential of the flat-12, still he had his concerns about reliability: “It kept breaking cranks – really fundamental things. I’d lost a lot of Grands Prix with the cars breaking…”

Thus he told Ferrari he was sorry, but his mind was made up. “I’d always got on really well with the Old Man, and I think he was genuinely sad about it. He said that if I was going to drive for Lotus or McLaren that would be one thing, but he had his doubts about the March set-up – and he was right! As we shook hands, he smiled, and said, ‘Chris, I will win a Grand Prix before you do…’, and he turned out to be right about that, too…”

So he did. In the unloved March 701, Amon was second at Spa and Clermont-Ferrand, but victory eluded him – as indeed it was always to do – and by half-season Ferrari was coming on strong, Ickx and Regazzoni finishing 1-2 at the new Ӧsterreichring, after which Clay won at Monza, and Jacky at St-Jovite and Mexico City. Amon – who to this day awaits three-quarters of his retainer from March – moved on to Matra, which meant a return to getting paid, but also to being again stuck with gutless V12s.

Folk are murmuring that perhaps Fernando Alonso, whose supremacy as a pure racing driver is unquestioned by most, also has an unhappy knack for leaving teams at just the wrong moment.

As Stirling Moss has pointed out, Fangio, in addition to all his other strengths, had a gift for being with the right team at the right time. After winning his first World Championship in 1951, with Alfa Romeo, Juan Manuel had two relatively fallow seasons with Maserati, but then won four further titles on the trot – and with three different teams: Mercedes, Ferrari and, more successfully this time, Maserati. That done, at 46, he called it a day.

Amon was rather less adept at making choices. If it has always been said, not without some justification, that much of his legendarily bad luck was of his own making, a part of that came from leaving teams at just the wrong time. When he signed for Ferrari at the end of 1966, for example, his friend Bruce McLaren was extremely disappointed, for Chris had driven his Can-Am cars, and was integral to his F1 plans, which came to full fruition in 1968, Bruce himself winning at Spa, and Denny Hulme at Monza and St Jovite – where Amon’s clutchless Ferrari was leading by a minute when its gearbox broke…

After leaving Ferrari in some frustration, Chris was to regret it for the rest of his racing career. Late in 1973 he was invited back to Maranello, but – having given his word to John Dalton, the backer for his ill-fated Amon F1 project – felt he could not accept.

Now, in 2015, folk are murmuring that perhaps Fernando Alonso, whose supremacy as a pure racing driver is unquestioned by most, also has an unhappy knack for leaving teams at just the wrong moment. He won the world championship with Renault in 2005, but although he did the same again in ’06 already he was committed to leaving the team, having long previously signed with McLaren for ’07. 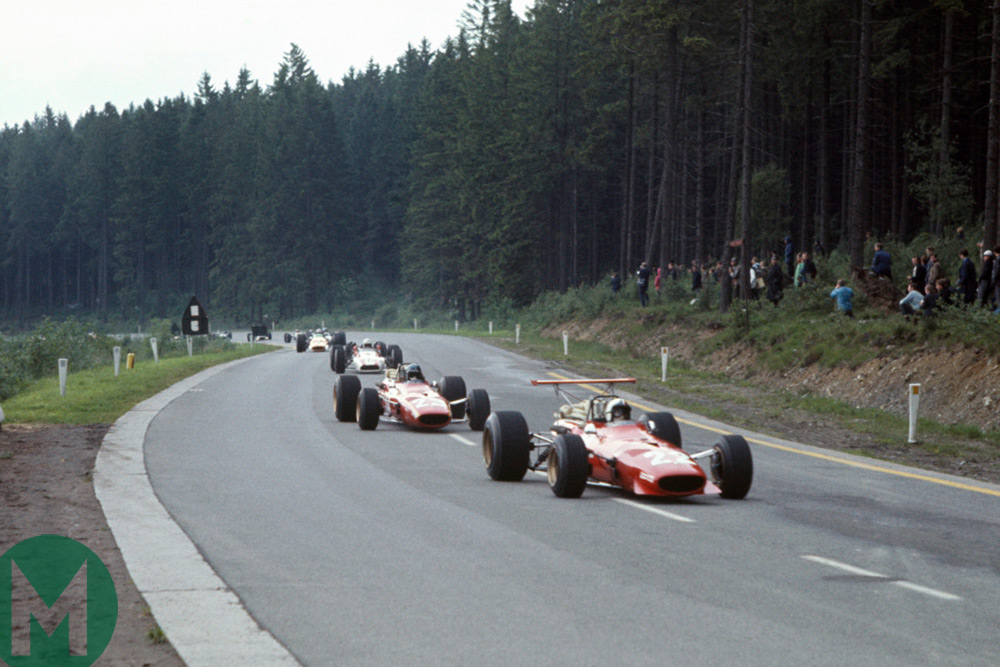 As history relates, the relationship between Alonso and Ron Dennis proved catastrophic, and although Fernando – like team-mate Lewis Hamilton – won several races, and was only a couple of points shy of the title, to continue the association was out of the question for both parties. Back went Alonso to Renault for a couple of seasons, until he could take up an offer from Maranello.

On paper, Fernando was put on earth to go there, and he did it with supreme optimism – as new Ferrari drivers always do. As Gilles Villeneuve put it, “When you’re first there, and you see all the facilities and everything, you wonder how they can ever lose a race. Then, as time goes by, and you become more aware of the politics, you understand…”

When Amon left Ferrari, not only Enzo was sorry to see him go. “It’s a fact,” said technical director Mauro Forghieri, “that we never gave Chris a car worthy of him…”

During five seasons with the team, Alonso, too, never had a car worthy of him – this was hardly the Ferrari of Brawn and Todt – and although his driving was consistently magnificent, further world championships kept slipping away. Last year he did not hit it off with new team principal Marco Mattiacci (replacing Stefano Domenicali), but even before Mattiacci’s arrival Fernando’s thoughts were of the exit door, and it didn’t help that the 2014 car was the weakest yet to come his way.

Having made up his mind to leave, Alonso did not have a surfeit of alternatives, for there were no openings at Mercedes or Red Bull, and so there arose the unlikeliest of scenarios: a possible remarriage – albeit one of convenience – between himself and McLaren. Conversations on the subject had been started by Martin Whitmarsh, but after he had been deposed in a palace coup by Ron Dennis, it was thought unlikely they would go any further. Eric Boullier, though, was able to continue what Whitmarsh had started, and finally Fernando signed a contract.

He says he has complete faith in McLaren-Honda down the road, although it may take a while.

As I write, it has just been announced that, following his testing accident at Barcelona, Alonso will miss the opening race of the season in Melbourne, although his doctors suggest he is absolutely fine, and this is merely a precautionary move, to preclude any possibility of a second concussion too soon after the first.

Even before the accident, though, McLaren-Honda’s preparations for the new season had been… to say the least, difficult, for although both Alonso and Jenson Button have spoken positively about the fundamental quality of the MP4-30, word persists that Honda has underestimated the challenge of returning to F1 in this new ‘hybrid’ era. At the first pre-season test at Jerez, only two power units were on hand.

At that test, too, Ferrari were quick out of the box – and with both drivers, what’s more, Kimi Räikkönen matching the pace of Sebastian Vettel, which he was emphatically unable to do last season, with Alonso as his team-mate.

It goes without saying, of course, that too much can be read into pre-season testing, but if Ferrari looked less stellar in the Barcelona tests, still it is clear that – after the chaos of late 2014 – a discernible step has been taken, and that should be no surprise, for the first ‘James Allison Ferrari’ was guaranteed to be a very significant improvement, as Alonso will have known.

He says he has complete faith in McLaren-Honda down the road, although it may take a while. Clearly he felt he had to break clear of Ferrari, and probably he was right, but just at the moment – looking at Ferrari’s testing results compared with McLaren-Honda’s – he surely wouldn’t be human if he were not to feel at least a twinge of uncertainty.

What was it his pal Mark Webber said to me a year or so ago? “Seb’s got his championships early, he’s having a kid early, and I think he’ll retire early – probably a blast in the red car, and then sayonara. And you know what, mate? It’ll be just his luck to go to Ferrari when they have one of their golden periods…”