The first of the back-to-back maiden grands prix, Qatar hosts a truly pivotal and intriguing round of the 2021 season.

On the back of Lewis Hamilton’s phoenix-from-the-ashes drive in Brazil and Max Verstappen’s controversial defence of his lead, the anticipation couldn’t be higher.

Losail International Circuit joins the calendar for the first time as the first round of the Middle Eastern close to the season and there is no form book here to give insight into who might win.

Mercedes played its joker in Brazil with a fresh internal combustion engine for Hamilton that provided a sizeable boost in performance. Red Bull was left on the defensive and couldn’t deny him victory but an immediate answer at Losail would be a welcome result.

Here is what you’ll want to keep an eye on during the Qatar Grand Prix weekend. 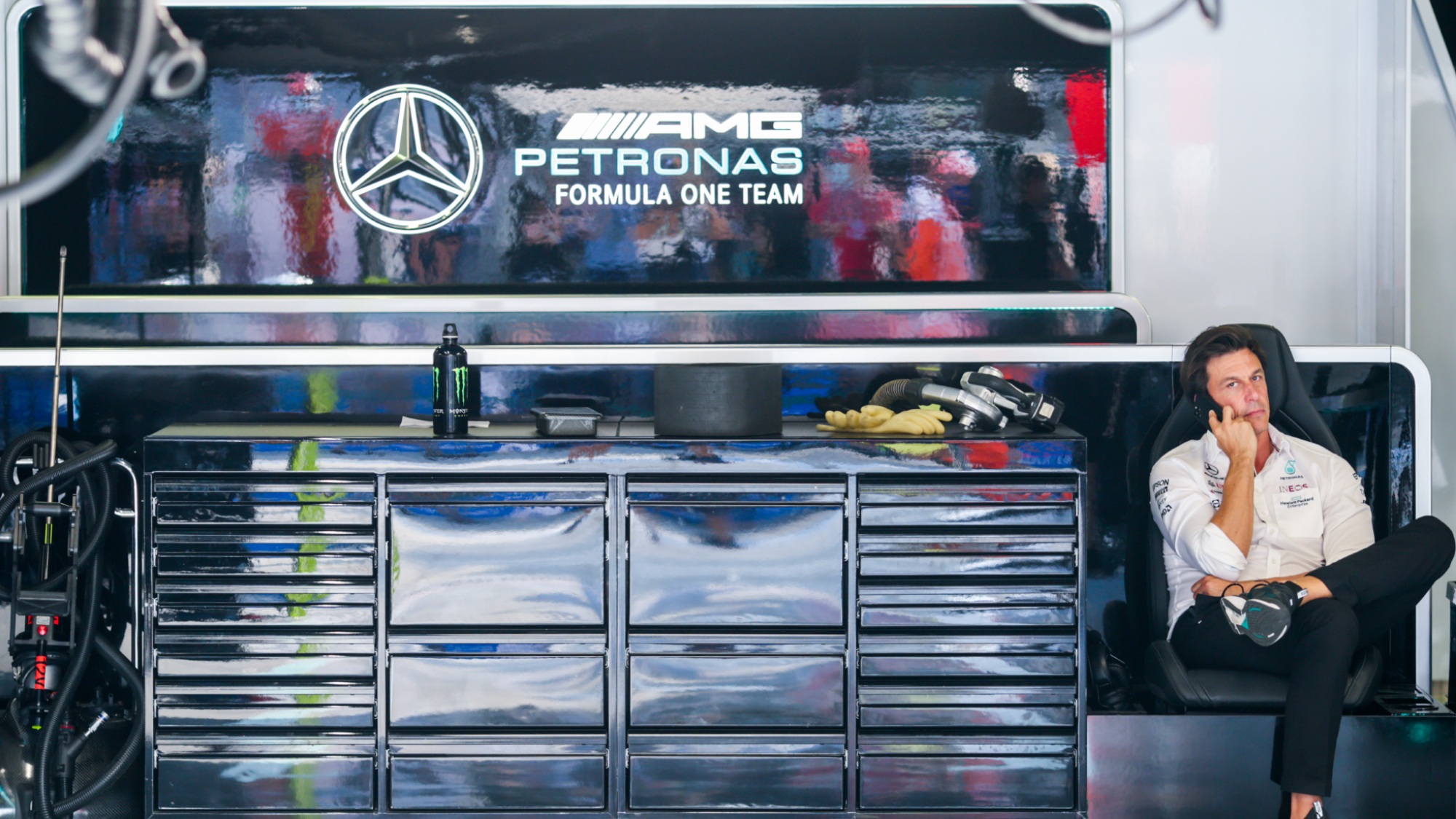 On the phone to the FIA? Things are getting angry on and off the track between Mercedes and Red Bull

Things are only escalating in this year’s fight for the championship between Mercedes and Red Bull. There have been rumblings behind the scenes at least from Red Bull to the FIA over the rear wing of the Mercedes W12 but its the Three-Pointed Star that has called in the referees.

As Christian Horner postulates and picks his words very carefully addressing these concerns to the media, Toto Wolff’s team has fired back and the gloves have well and truly come off between the two team bosses.

After the front-facing camera angle from Verstappen’s car emerged on Tuesday after the Brazilian GP, Mercedes requested a right of review into the incident on the grounds of fresh evidence coming to light that was unavailable to the stewards at the time.

The animated Wolff made his feelings known throughout Sunday afternoon. Pre-race, the Austrian fumed as Red Bull once again changed rear wing elements on the grid under parc fermé conditions, hours after Mercedes had been unable to alter Hamilton’s after falling foul of the technical regulations under FIA inspection without taking a grid penalty.

His “**** them all” radio message to Hamilton after the Mercedes driver had taken the lead demonstrated how intense the fight has become.

If Red Bull is as far behind this weekend as it was in Brazil then might we see a bit more politicking? Horner has made clear the team intends to dig deep to find out how Mercedes was so quick in Sao Paulo with a laser focus on the rear wing.

Could there be a Red Bull counterpunch coming? Even if there’s not, it won’t stop either team boss from firing off a few well-placed shots in the media this weekend. 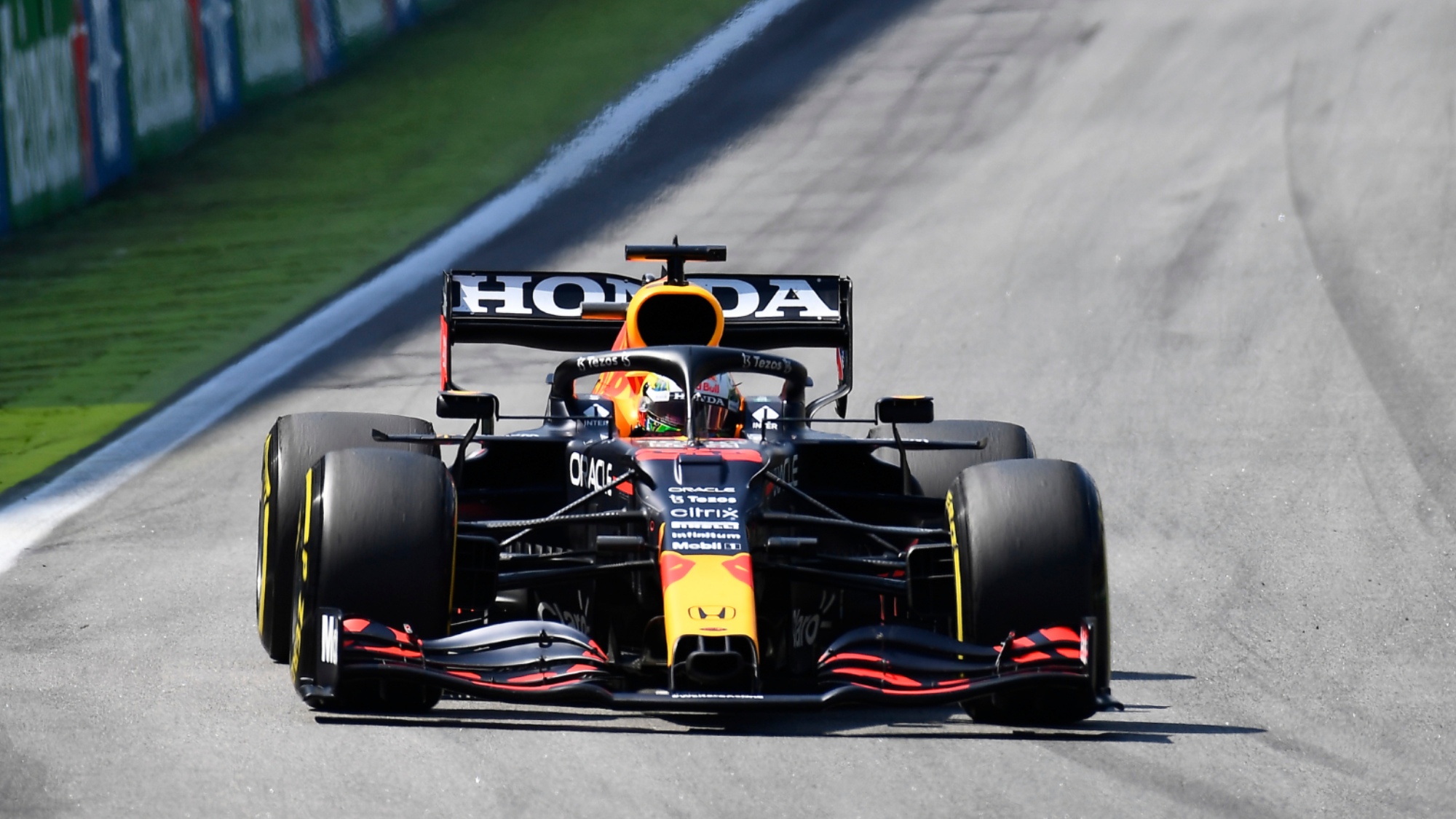 Was Mercedes in the sweet spot or did Red Bull miss the mark in Brazil?

Hamilton’s Mercedes turned heads in Brazil with a fresh power unit and the rear wing that aroused suspicions over at Red Bull.

Both combined at Interlagos for a handy top-end speed advantage for the reigning champion that could be crucial for the upcoming rounds and finding the key data will provide a great level of insight into the shape of the championship fight.

The ‘X’ marking the spot this weekend will be the speed trap data.

Mercedes intends to run the Brazil power unit until the end of the season so if the performance advantage from last weekend holds up in Qatar, Red Bull will be very worried.

With Losail designed for MotoGP bikes rather than F1 cars, everyone will be learning just how to tackle the circuit for the first time though Ducati usually romps away in Qatar due to its straight-line speed performance in MotoGP.

Of course, comparing bikes to single seater cars is like apples to oranges but if that power advantage carries over and proves to be as vital for the F1 machines then Red Bull could have a problem.

Interlagos is still a circuit at a fairly high altitude and Verstappen and co were already struggling in the speed traps compared to its direct rivals. A greater level of performance from Mercedes engines could be theorised now that we’re closer to sea level though that is hardly a guarantee in this unpredictable season.

If the Mercedes output is more closely matched to Red Bull then the “rocketship” comments from the RB camp to describe Hamilton’s car in Brazil might have been a smokescreen to disguise a poor weekend for the Bulls.

Best of the rest 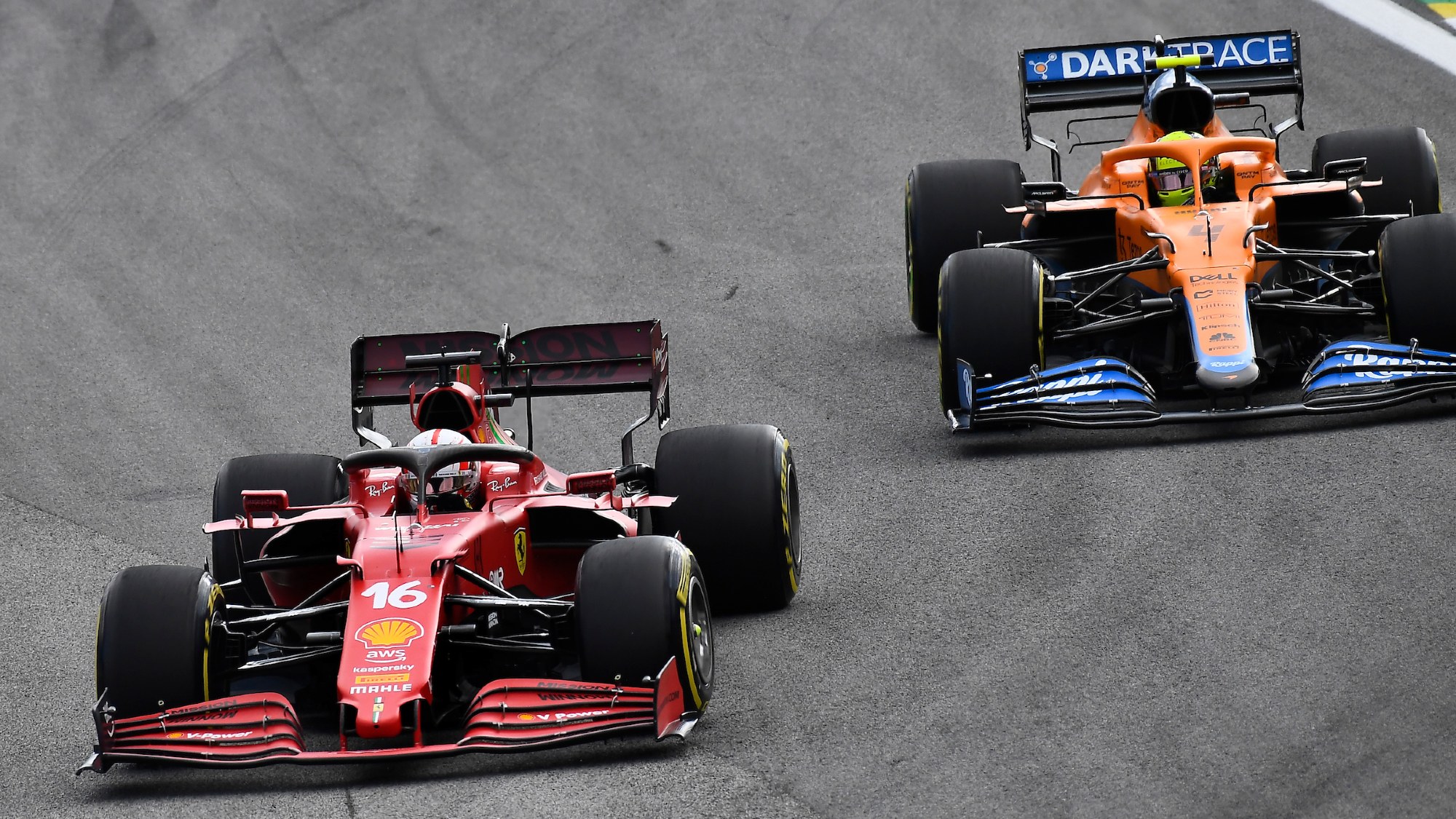 Ferrari has stolen the march against McLaren in recent rounds

One point for McLaren was a disaster as Ferrari stole a march on its rival for best of the rest in Brazil. Charles Leclerc and Carlos Sainz combined to score 19 valuable points to move 31.5 clear of McLaren in the constructors’ standings.

Since Ferrari introduced its new engine upgrade for both of its drivers, the Woking squad has struggled to keep pace with the red cars. Ferrari expected the papaya cars to be closer in Brazil but Lando Norris got a little bit too close to Sainz and his puncture left him with a salvage mission to secure a solitary point.

Daniel Ricciardo’s loss of power in the second half of the race was a huge blow to McLaren as it battles for third position in the championship and all the prize money that comes with it.

A 28-point swing in the past two rounds has put Maranello on the front foot and with more power circuits coming up, it looks as though it might have the battle all but won to restore itself amongst the top three teams in Formula 1.

Team principal of Ferrari Mattia Binotto is still wary of the threat McLaren poses but based on recent performances, the Scuderia might be opening up an insurmountable lead at just the right moment.

“A good result in terms of the championship, given that we have doubled our lead over our closest rivals in the constructors’ classification,” he said. “A 31.5 point lead doesn’t mean that it’s done and dusted, far from it. We know the situation can change in an instant and that our opponents are very strong.” 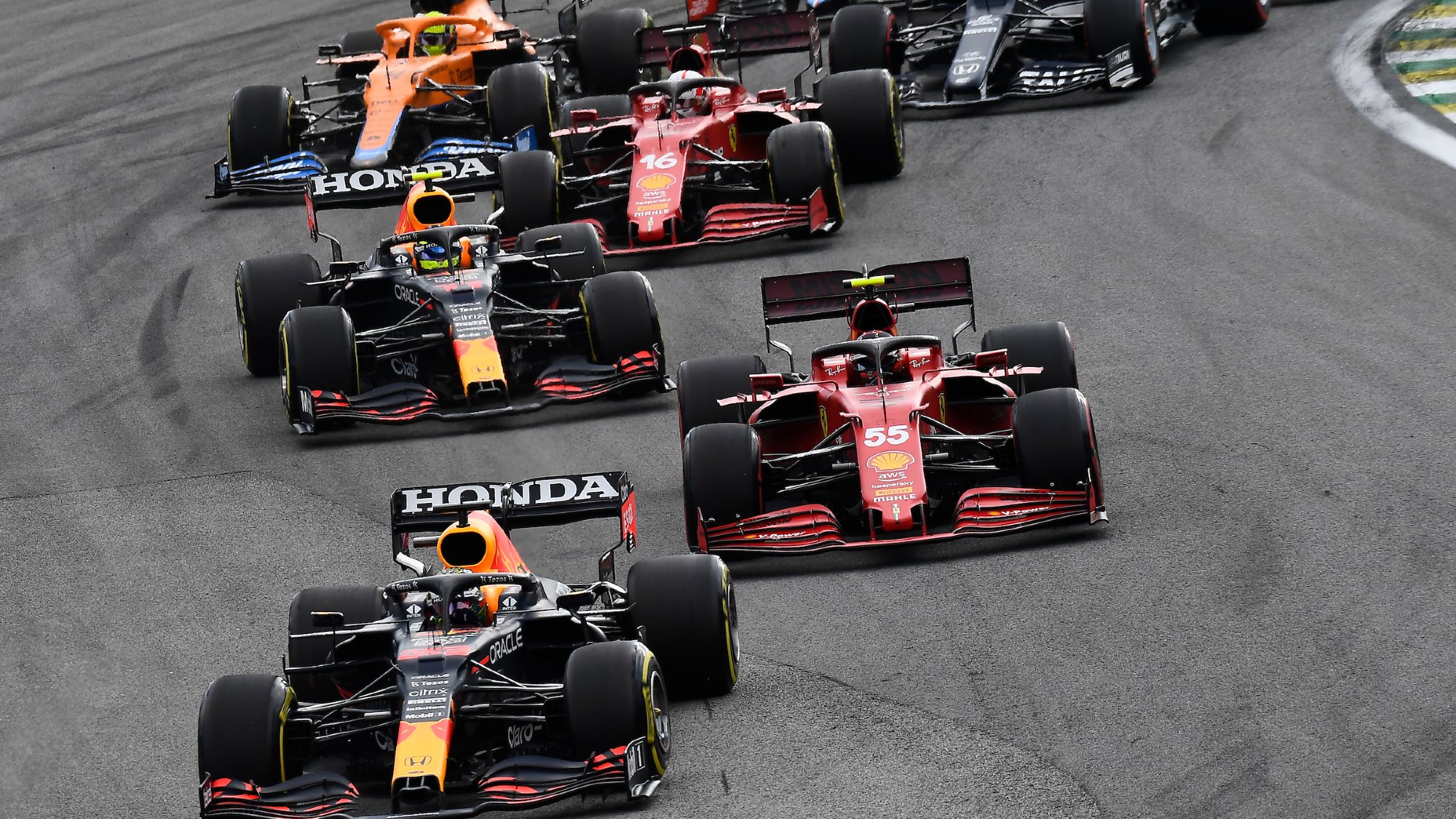 There’s even more worrying news for McLaren fans and it’s courtesy of an old friend. Sainz extended his consecutive points-scoring streak in Brazil to 12 races. The Spaniard last failed to score a point back in June at the French Grand Prix where he finished 11th.

Next best in terms of scoring streaks are Norris and Sergio Perez, both tied on seven consecutive points-scores dating back to the Dutch Grand Prix.

Since the collision with Hamilton during the Italian Grand Prix, Verstappen has failed to finish outside of the top two positions, securing wins at the US and Mexican Grands Prix and second place at the Russian, Turkish and Brazilian GPs.

His impressive consistency has him leading the title race into the final three rounds but with a resurgent Mercedes bearing down, can he maintain that form and take a maiden title?

On the teams front, Mercedes currently has the hottest streak going now standing at 13 races. The last time the reigning constructors’ champions failed to score a point was at the Azerbaijan Grand Prix. Rivals Red Bull only have nine-consecutive points finishes in comparison.

It’s Ferrari that’s second best in this department, its streak still going from the Styrian Grand Prix and is just one less than Mercedes.

Keeping up current form is crucial in the final races of the season.