Overtaking used to be an art form. Unrestricted by six-point harnesses, its rules were unwritten, its boundaries proscribed by buildings and/or trees plus a sense of self-preservation that was, admittedly, stronger in some than in others.

It’s become much more scientific nowadays as gobs of DRS in attack and dabs of KERS in defensive response are applied long before the brakes are. But this has not made the process cleaner cut in the increasingly make-believe world of modern Formula 1. 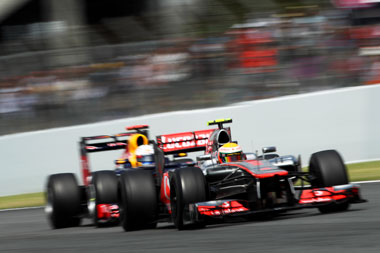 As such, a code of practice has been drawn up – and was reaffirmed as recently as the British GP. Trouble is, there’s not much time to grapple with legalese at 200mph. And anyway, an overtake is by its nature a complicated brew of ‘malice’ aforethought and passion.

I had fortunate reason to speak with Alex Zanardi this week. Our chat about his approaching Paralympic Games appearance meandered, as I’m sure most of his interviews must, towards what American race fans still call ‘The Pass’. In 1996, on the last lap of the last race of his Rookie of the Year season in CART, he lunged down the inside of Bryan Herta at the top of Laguna Seca’s Corkscrew and somehow gathered it up at its bottom – but not before his four wheels had crossed the inside kerb. (Two of them skimmed the gravel beyond.) The move was a mix of passion, ‘malice’ aforethought and, chuckled Alex, a knight from a different era, luck.

These days he’d be lucky to keep any such resultant win.

Sebastian Vettel’s crime – more of a misdemeanour really – at Hockenheim was that he too crossed a kerb with all four wheels, in passing Jenson Button for second place. He says that he was giving his rival room in order to avoid an impact. Hmm, maybe. Button, meanwhile, was always going to run Vettel wide, as the man slightly ahead on the inside has long been allowed to do. Fair enough. But he knew too that if he could force him wide enough that he could get on the blower and grass him up.

Grass, remember that? Why such a big run-off area is deemed necessary at the exit of a second-gear hairpin is beyond this writer. And since when did the needs of Hockenheim’s drag strip become more important than its Grand Prix?

The painted line that Vettel crossed clearly wasn’t invisible, but it was ethereal at best. Such is the emperor’s new clothes of F1. At which point the stewards, who these days are advised by an ex-F1 driver but are not beholden to him, were encouraged to use their discretion. 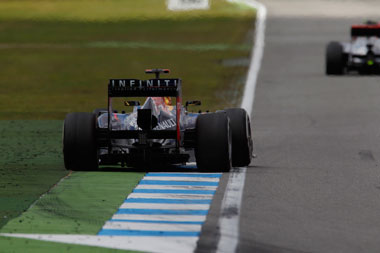 You see, it’s always going to be subjective no matter how it’s policed. And the more interventionist and nitpicking it becomes, the more subjective and unsatisfactory it will be. Far better then to let the drivers and teams make all but the biggest calls. If they were so re-empowered they might show more gumption, as opposed to queuing glumly and sulkily outside the headmaster’s office.

Vettel, in the (tepid) heat of the moment, either felt that he had done nothing wrong or hoped that he might get away with it at his home Grand Prix. Whereas I immediately thought, given the current ticklish climate, that probably he would be gonged for his action.

And so he was: by a 20-second penalty, the equivalent of a drive-through, which dropped him from second to fifth. Ironically Hockenheim’s pit lane is shorter than 20 seconds long. The penalty is also a moving targeting in that he might have dropped to third – or last – had the field been spread differently.

Having not read the FIA’s rulebook – a biblicial tome that I presume is still a bilious yellow – I had no idea of the severity of the only sanction available to the stewards should they reach a guilty verdict. Somebody at Red Bull Racing ought to have read it, however. True, the team did not have much time to react, but that’s what F1 is all about. Hence the risks – and pains – that McLaren has gone through to achieve its 2.3-second pit stop.

Wouldn’t it have been better for Red Bull to play safe? Why gamble on gaining three points when there was an even chance that it might lose five?

That it did twist rather than stick was perhaps a corollary of the pressure that Fernando Alonso is applying. Not only was his Ferrari leading on that particular day, thus pulling away in terms of distance and points, but also he is perhaps the only driver who might have taken an in-cockpit decision to coolly cede his ‘ill-gotten’ position.

A lawyer’s mind in a racer’s body is what it takes these days.